NWA POWERRR: Gordon flips into action against The Ambassador 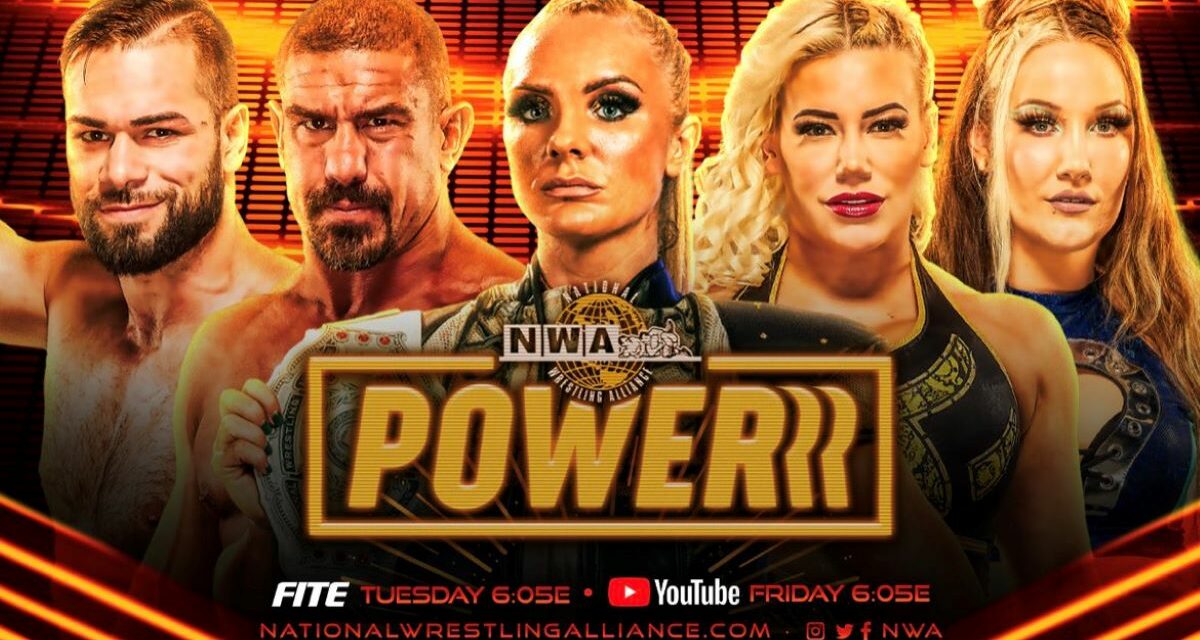 The National Wrestling Alliance is looking to make some moves as Hard Times 3 is just around the corner.  Not only does tonight have a huge women’s title match between Allysin Kay and the current holder of The Burke, Kamille, but Flip Gordon is looking for action against The Ambassador of British Strong Style, Doug Williams.

We head to the Skyway Studios in Nashville, TN.  Joe Galli, Tim Storm, and Velvet Sky have the call as they go to your First Match of the Night… 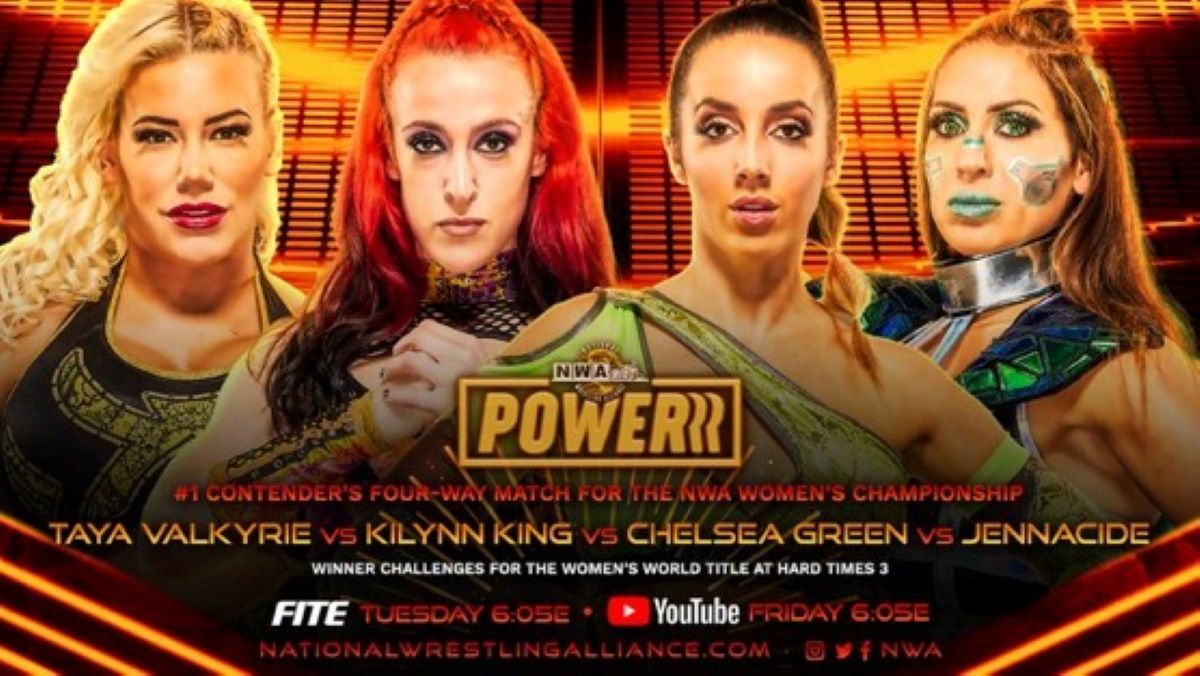 Taya Valkyrie vs. KiLynn King vs. Jennacide vs. Chelsea Green

This match is to see who will contend at the upcoming Hard Times PPV and be the new number-one contender for The Burke.  All four women make a strong argument as they go on the attack.  Jennacide and King powder out early, and Valkyrie and Green battle it out with LA Wera Loca landing with a crossbody to a hip attack.  She goes for another, but Jennacide trips Valkyrie and pulls her hard into the ring post, and unleashes a big boot kick to cover Green, but King breaks the count.  King then nails with a roundhouse kick to a steamroller and goes up top for a senton on the Cyborg to cover for a two count.  Green manages a DDT/flatliner combo on King and Jennacide. between Valkyrie, Jennacide, and King, Green tries to pin anyone but comes up unsuccessful and frustrated.  Jennacide is back up and gets a slam for just a one count, then King lands a missile dropkick to Green, and then to a spinning neckbreaker to Jennacide.  She goes for the cover, but Valkyrie breaks it up, and she and Green attack with everything they got, and then each gets a double takedown.  King and Jennacide are battling outside, and Green attempts the Unprettier finisher, but Valkyrie reverses and delivers the Road to Valhalla for the win.

Your Winner, and New Number One Contender for the NWA Women’s Title:  Taya Valkyrie

At The Podium is Kyle Davis with NWA Owner, William Patrick Corgan. Nothing new is said here, but he thanks the fans for making the NWA great. He reiterates that NWA75 is coming back to St. Louis and gives a bold prediction that it’ll continue to the 100th anniversary.  While there was no EmPOWERRR this year, there will be in the future, and thanks people like Mickie James for her contributions, as well as Tyrus and Trevor Murdoch for their main event, and Kamille for defending The Burke twice both nights.  He says don’t believe the clickbait because more is in store.

But let’s head to the ring for… 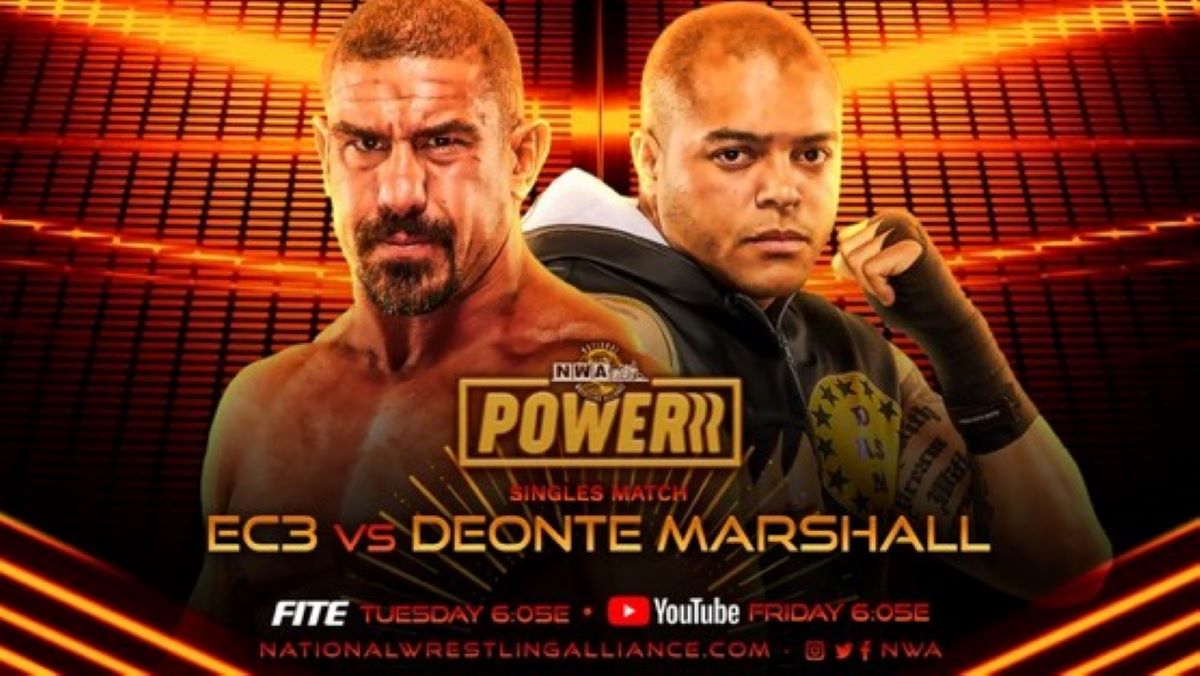 Mostly, this is a one-sided fight, as The Essential Character of Control Your Narrative just overpowers Marshall.  He faces the hard camera and “talks” to Thom Latimer and continues to beat on Marshall.  The Ruff N’ Ready wrestler tries to unleash bombs, but EC3 gets him with a boot and a clothesline to the back of his head, and crossfaces Marshall on the middle ropes.  He lands The One Percenter on Marshall and then locks The Purpose submission for the win.

Your Winner via Submission:  EC3

After the match, EC3 makes a beeline to The Podium, where the rest of the CYN faction have their back turned.  Davis backs away, and give EC3 the mic.  As the men of CYN turn around for The Essential Character, here’s what he said:

“It’s not an invasion. This is an awakening. We do not come here as conquerors. We come here as liberators of the mind, the body, and the spirit. Each man that stands behind me has faced Demons, Depression, PTSD, anxiety, addiction. But these men, they didn’t choose twelve steps; they made one decision to Control Your Narrative.

Thom, I know who you can be. I know exactly the talent and the man you can become. But you have to go through another level. There is a new depth you must go to become who you are because you do not have control. You do not have freedom. And until you go deeper into the darkness it still exists within you. You will not have purpose Thom.  You’ve been warned.”

Backstage with May Valentine are Aron Stevens, KC Roxx, and The Question Mack (who she “mistakenly” takes for Rodney Mack). After Stevens sends Roxx off to do his laundry away from the camera, he addresses that he is not “tired, but rewired.” He has now established Black Glove Management to manage the stars.  Valentine is confused by the whole “why is Mack under a mask” but Stevens explains that Mongrovia has no copyright laws, and therefore no one can prove that Mack is not The Question Mark.  How does he provide it?

Valentine says this is the first time she’s hearing this but tells Stevens that they’ll talk later.

(Author’s Note:  Two things.  First, Joseph Hudson has to be smiling at this segment.  Second, nowhere in the history of relationships have the words “we’ll talk later” uttered by a woman ever led to anything good.  Bon Chance, Stevens!)

Now for some championship-caliber matches for the… 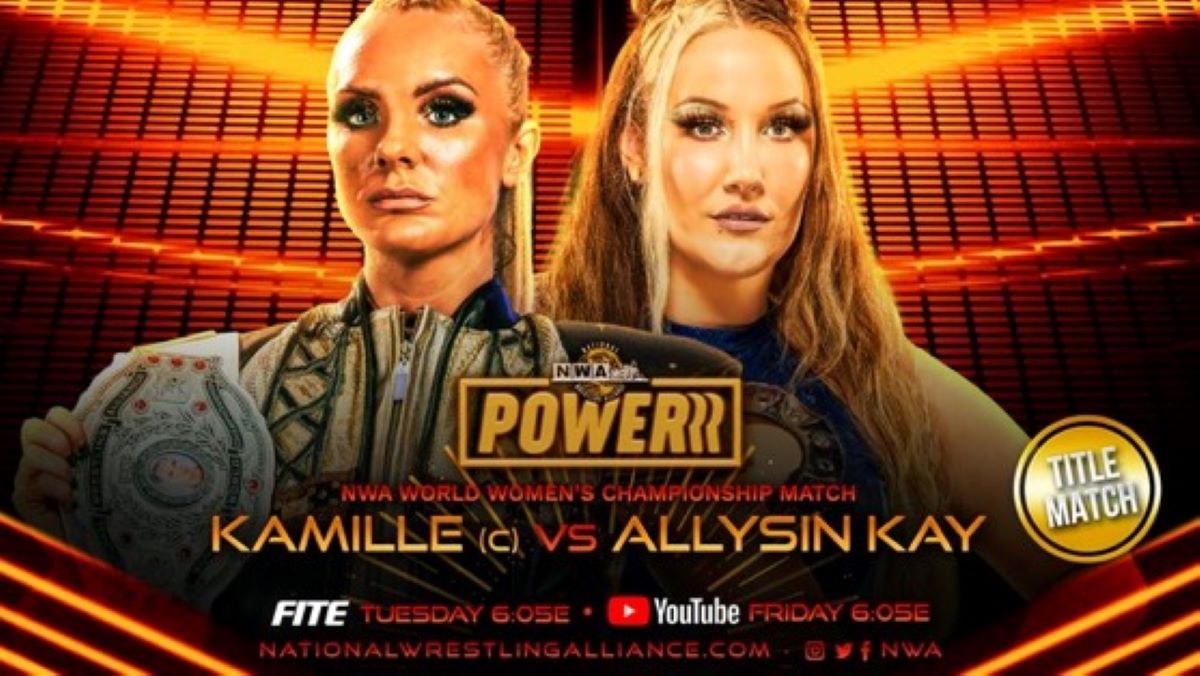 This is the first time Kay has challenged for The Burke since she was beaten by Thunder Rosa for the title at the first Hard Times PPV on January 2020.  Kamille and Kay start with a strong collar and elbow lock-up, and they go back and forth with no give to either woman.  Kay goes for a test of strength, and they’re evenly matched, but Kamille gets out of the hold  The champ sends Kay to the ropes and nails a spin kick.  She gets ready for her spear, but  Kay dodges Kamille’s momentum goes through the corner, and her shoulder hits the ring post.  Now Kay smells blood and goes for a Fujiwara armbar to weaken the shoulder of The Brickhouse.  She chops at Kamille and then yanks her arm hard to pull it out of its socket.

Kamille tries to chop back, but Kay returns back on offense and continues back to the armbar and then a crossface to get a submission, but Kamille gets out of the hold.  Kay continues the arm offense, but Kamille finds the strength to do a slam but can’t capitalize afterward because of the pain she’s under.  Both women climb up to their feet, and Kamille returns the receipt and follows with a leg lariat for a two count.  They both go hold for counter hold, but Kay finally gets a Samoan Drop and follows with a big boot for one, two…oh, it’s a close kick out.  Kay attempts the AK47 finisher, but Kamille rolls through for a two count.  As Davis announces that one minute remains, both women swing for the fences with forearms and then they each get a double clothesline that knocks them both out.  As they finally get back up to a vertical base, Kay and Kamille keep throwing bombs until the bell rings and the time limit expires.  Therefore…

No Winner via Time Expiration

The fans are chanting, “Let them fight!”, but it won’t be tonight.   Kamille offers her hand in a show of respect, and Kay grudgingly accepts, but you best believe this is far from over.

May Valentine is with The Cardonas. Matt Cardona finally admits he came back too early for the NWA UNIVERSE, but his injury is further aggravated as he was attacked from behind by Trevor Murdoch.  Valentine goes to Mike Knox and even though he lost the Tables match to Bully Ray (which he conveniently forgot) he lays out in no unspecific terms that he and Ray are far from done. Brian Myers and VSK are here for their boy, and Matt Cardona assured us that he will help his family be champions in the NWA.

There was a review of the Dak Draper and JAX Dane match from NWA USA but read here if you want to catch up.

May Valentine now has The OGK and they’re after NWA Gold. Mike Bennett says they’ve seen success in other promotions like Ring of Honor, but it’s in the NWA that title opportunities seem to elude them. Matt Taven states they want to be the NWA tag team champs and they’ll go through La Rebelion to get them, and he assures us it won’t be long until they become champs.

It’s time for the main event which is … 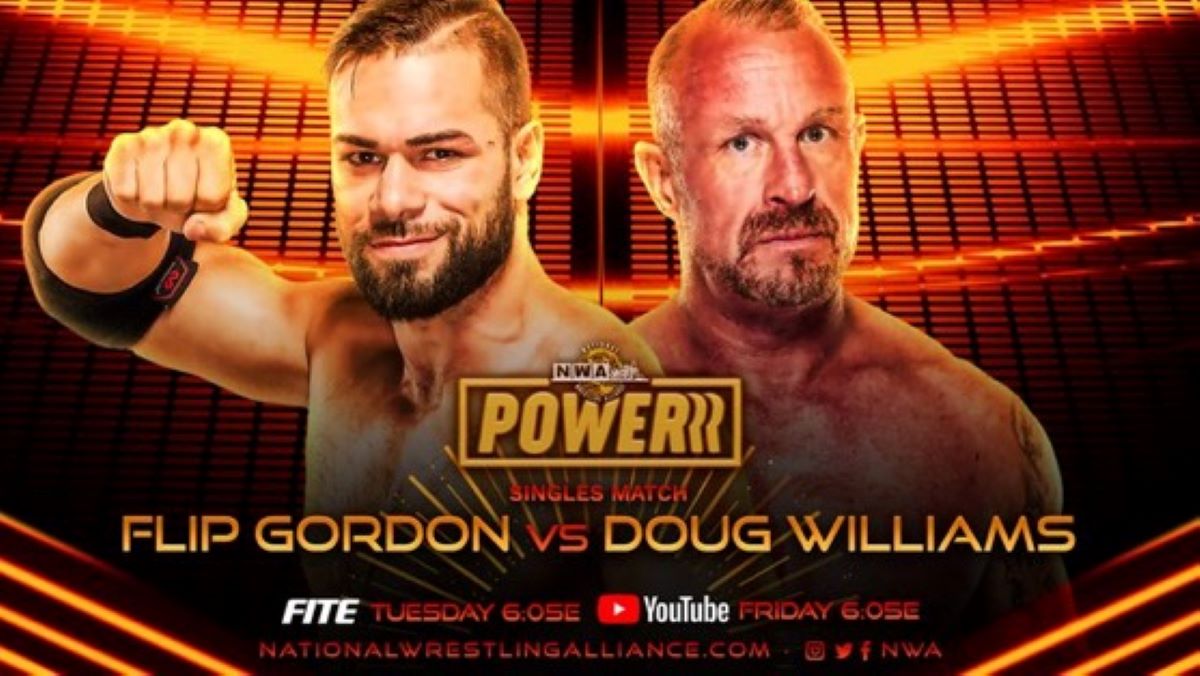 Galli brings up that Aldis came out with both men simultaneously.  It was supposed to be a tag match but with Harry Smith still out with an illness and Aldis having a concussion after his altercation with Odinson (who we learn is suspended for his actions on Night Two of NWA 74).

In any case, this is a nice “speed versus technique” match to start as The Ambassador starts with a suplex and gets a wrist lock but Gordon gets out, but it’s not long before Williams grounds the aerial specialist.  He sends Gordon to the corner, but he uses his agility escapes and lands a kick and then goes to a clothesline in the corner, and then he nails a stiff kick to a shooting star on Williams to cover for a two count.  Gordon rushes at him but meets an elbow by Williams, and then he hits a flying European uppercut to cover for a two count.  He goes back to the ground game with a headscissors to Gordon, but he reaches the bottom ropes.  He attacks with chops, but Williams rocks him back and then gets a nice snap suplex to cover Gordon for another two count.  Williams shows off more of the British strong style with a gutwrench suplex and then follows with a high back suplex.  Williams slaps on a camel clutch to wear down his lower back.  Gordon gets free, but Williams shuts him down.

Gordon manages another escape and gets a missile dropkick to create space, and then goes to his aerial arsenal with a Kinder Surprise (springboard superkick to Williams on the top turnbuckle), and then follows with a tornado DDT for a two count.  He locks The Ambassador with the Submit To Flip but fights through and grabs the bottom ropes to break the hold.  Now Williams has a few other surprises as he gets Gordon into a reverse Gory Special to ram him into the corner turnbuckle.  They fight up the top of the turnbuckle, and Gordon shoves off Williams.  He launches for another high-risk maneuver but is caught by Williams in an exploder suplex, followed closely by a Tiger Driver 98.  He signals for the Chaos Theory finisher, but Gordon gets a springboard superkick to cover for a two count.  Then he lands a second rope moonsault to Williams for another two count.  Williams goes for a suplex but Gordon flips through and delivers a springboard cutter to finally put away Williams for the one, two, and three.

Your Winner via Pinfall:  Flip Gordon

After the match ends, Odinson runs into the ring and sprays in Gordon’s eyes.  As he is blinded, Aldis gets in the ring to clear out Odinson. The National Treasure calls him out, but Odinson back off, and that will be an issue for another day as the show goes to credits.

I’d say the show earned that 1/2 star for three reasons:  The promo EC3 delivered, Kamille and Kay having a great match (even if it ended in a draw), and Gordon/Williams in the main event.  Whatever issues the NWA had last month at POWERRR tapings seemed to have smoothed over.