EC3 and JC are continuing to Control Your Narrative 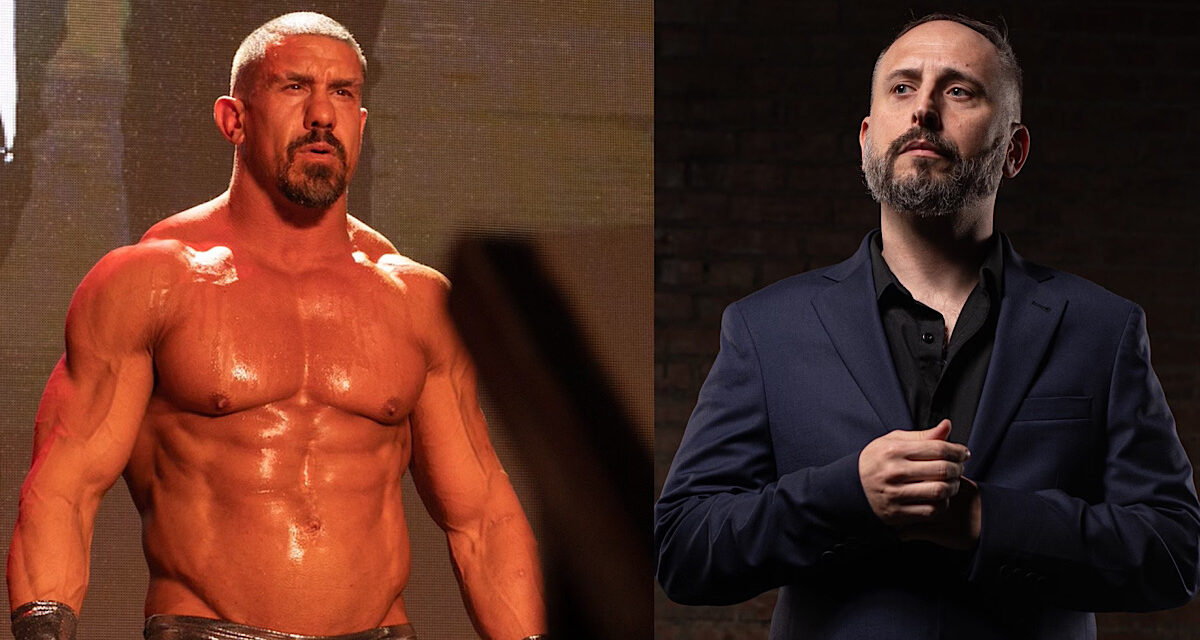 One of the biggest criticisms of the current wrestling product that fans have is that it’s “too scripted” or the wrestler(s) doesn’t “get over” with fans, sometimes because creative was, well… too creative. Such was the case for EC3 (Michael Hutter) as he has spearheaded a new movement in professional wrestling with the Control Your Narrative movement, which has expanded over time.

For those not familiar with Control Your Narrative, it’s best for new readers to associate it with the movies, as the subject comes up a bit during the interview. In this case, Fight Club. While no soap-making takes place, the idea of being in control of one’s own destiny and a sense of anarchy at the corporate establishment of modern-day professional wrestling is at the heart of CYN, where EC3 has evolved into a cult of personality, like the Tyler Durden character.

To that point, if EC3 is the Tyler Durden of CYN then his collaborator, Jedediah “JC” Koszewski, describes himself as the Edward Norton character along with a few other titles. “That is how it’s been for a while even when he was in WWE. I was kind of his creative liaison and I helped produce him into the new version of him,” explained JC, “but in the sense of Control Your Narrative, I am the Wizard of Oz. Like I’m the creative, evil genius behind it all. I don’t like to be a wrestling producer or wrestling promoter. I’m something so much more. So right now, we’re using the term ‘The Narrator,’ because I am the one that tells the story and whether that story is a verbal story, artistically visual… Yeah, I’m the executive producer.” 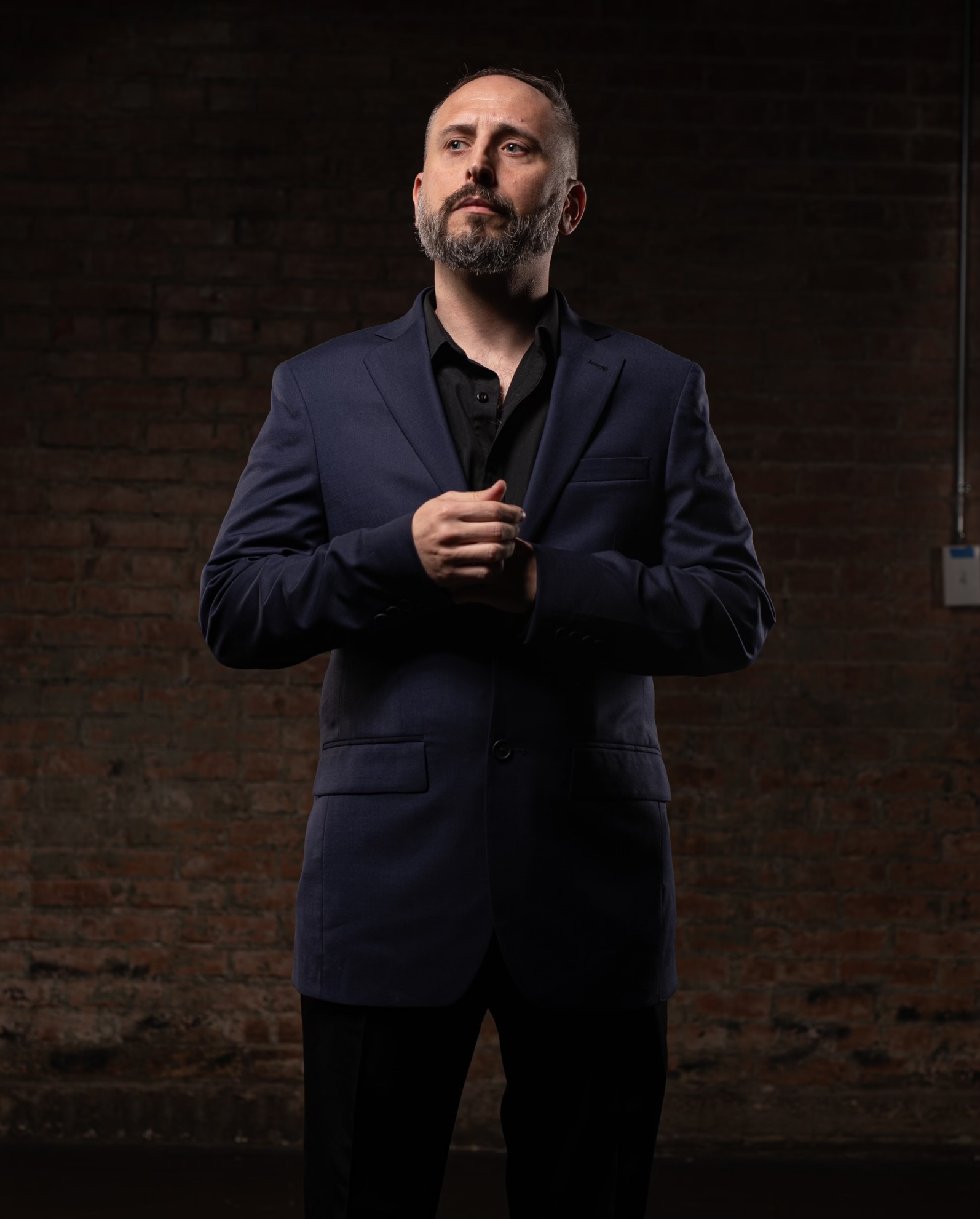 Jedediah “JC” Koszweski: “The Narrator” voice behind Control Your Narrative

As for EC3’s role these days, when asked if he would consider himself the executive vice president of CYN, he had a different take on the matter. “If anything, I look at Control Your Narrative as a Roman legion,” he explained. “The military unit, and I am a general in a sense, but I’m on the ground floor with the men fighting the battles, leading charges.”

JC explained first about where the origins of EC3 came to be. “Well when the pandemic happened, we’re all stuck at home, figuring out who we are. And at that time, I started writing a book about a cinematic verbalization of what family wrestling’s are,” he said. “So, when we started, he [EC3] had 90 days when he got released, and we had 90 days of corporate sponsorship because he was still under the payroll to create the essential character, and more importantly the narrative. And within that we were able to create the ‘Free EC3’ which everybody saw [on] Impact Wrestling.”

But there were no plans on it becoming a company putting on shows. “We never really saw it as a promotion. We saw it as… first off, we’re just ‘Free EC3,’ And then you know within that Moose came in with us and Moose started becoming free,” explained JC.  “And then, we see everything that Matt Cardona was doing, and Matt Cardona is actually the originator of controlling his narrative.”

It was also during that time that CYN was really doing groundbreaking work, including the Free Your Narrative productions. There is an artistry to the Free Your Narrative I and II (both available on the streaming platform Prowrestling.TV). While the format is traditional professional wrestling, the cinematic element has the wrestlers like John Skyler and Parrow and Moose describe their story of how they were “broken” or discarded, only to arrive in this underground arena where they find themselves in combat and become “free” to control their destinies, or narratives under the watchful eye of EC3.

SlamWrestling.net first talked about the Free The Narrative piece that had in its “main event” EC3 taking on Matt Cardona and give what JC called a “Bro-Ski Funeral” to the Zack Ryder character of Cardona. “Where it just kind of slowly organically happened in Cardona [he] sat down and gave us the opportunity to do Free the Narrative one and became our cinematic universe,” said JC. In the main event, Cardona wrestled a traditional hardcore match with EC3, but realized there was no ref, and they had to go on fighting until someone stopped or tapped out, a la “Fight Club”, which is what happened in the case of EC3 choking out Cardona, and thus freeing him.

As for the fan response, apparently it was a mixed bag. “It was a struggle because the wrestling world is so live streaming in your face,” admits JC. “It took us about four months to actually complete it, you know, because we were also juggling life. At that point, Cardona was already feuding in GCW and debuted, so we’re debuting our product the same time as he started another feud. So, we got lost in the mix.”

EC3 also had a similar take on the query. “It didn’t, like, blow up, and I don’t know if it was being so different,” said EC3. “Is it a lack of marketing? Is it trying to make people pay for something they don’t know yet? I think those were all parts of it, but everybody who watched it… high levels of accommodations and positive things and I love seeing something different.”

Part of doing something different is getting more eyeballs on the products, and that’s where they have a deal set up with ProWrestling.TV.  “We wanted to be part of something new and fresh. It did work out really nice that ProWrestling.TV was based out of Orlando and so are we,” said JC. “Being on the ground floor and working together on multiple projects from the gate was very nice, but PW TV is … the groundwork has a lot of podcasts, the live wrestling events they were able to offer Control Your Narrative with something that nobody else can offer and that’s been the flagship programming where they will, no matter what…we’re the headline or the forefront.”

The roster is also growing as well.  Since Free Your Narrative I and II, others have joined the roster such as “The Titan” Adam Scherr (the wrestler formerly known as Braun Strowman), Killer Kross, and Austin Aries, to name a few.  They are also doing live shows on May 13–15th in Cleveland, OH; Detroit, MI; and Milwaukee, WI. The events, titled “The Awakening”, will feature, among others, Flip Gordon, Wesley Blake, and another familiar name. “We debuted Dirty Dango,” said JC.  “’Dirty Dango does Dallas.’ we did that. [We] will debut on our Awakening Dallas, which comes out May 13 on PW TV. But we also are debuting on May 13 in Cleveland Sarah Rowe; Sarah Logan from the Riott squad.” 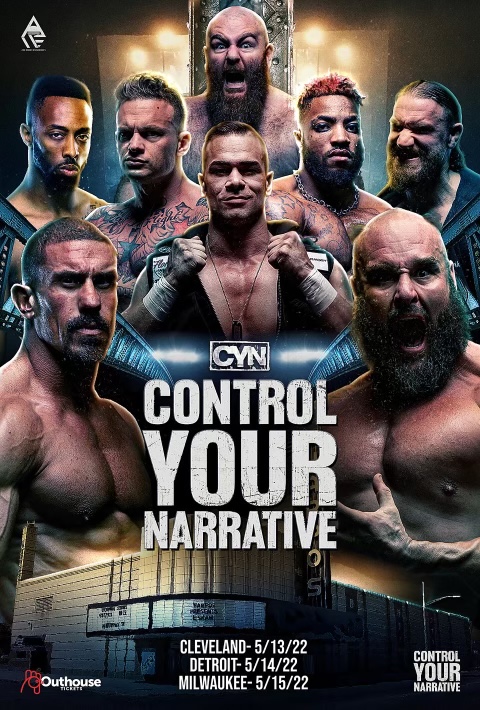 There is more on the horizon for the promotion, JC noted. “We’re very fortunate to have multiple avenues as CYN is turned into a promotion. So Free The Narrative will be your cinematic films; those will come out a few times a year where we elevate the presentation artistically and really push boundaries, but also give really in-depth, deep character development and storytelling that you don’t really get the opportunity to do on live events or pay per views.

“Live events or pay per views will still continue to have respect to the simplicity of how pro wrestling is presented,” JC continued to say. “However, I’m going to go above and beyond and still create cinematic entrances.”

There is a trailer out now for the Free Your Narrative III coming soon:

As for how to achieve it, EC3 is just as enthusiastic in that vision as well.  “Capturing those moments creatively with skilled cinematographers, cameraman, or music, you know, our imagery, and rehashing, telling that story, conclusively through a 22-minute block of highlights and what got us there and an emotional roller coaster of a package for later use; That that can be truly art too. So, I think we can do [the] best of both worlds.”

Tickets for the Control Your Narrative live shows in Cleveland, Detroit, and Milwaukee areas can be obtained by clicking on the following site — controlyournarrativelive.ticketleap.com