NWA USA: The Dane Event is looking to work off frustration 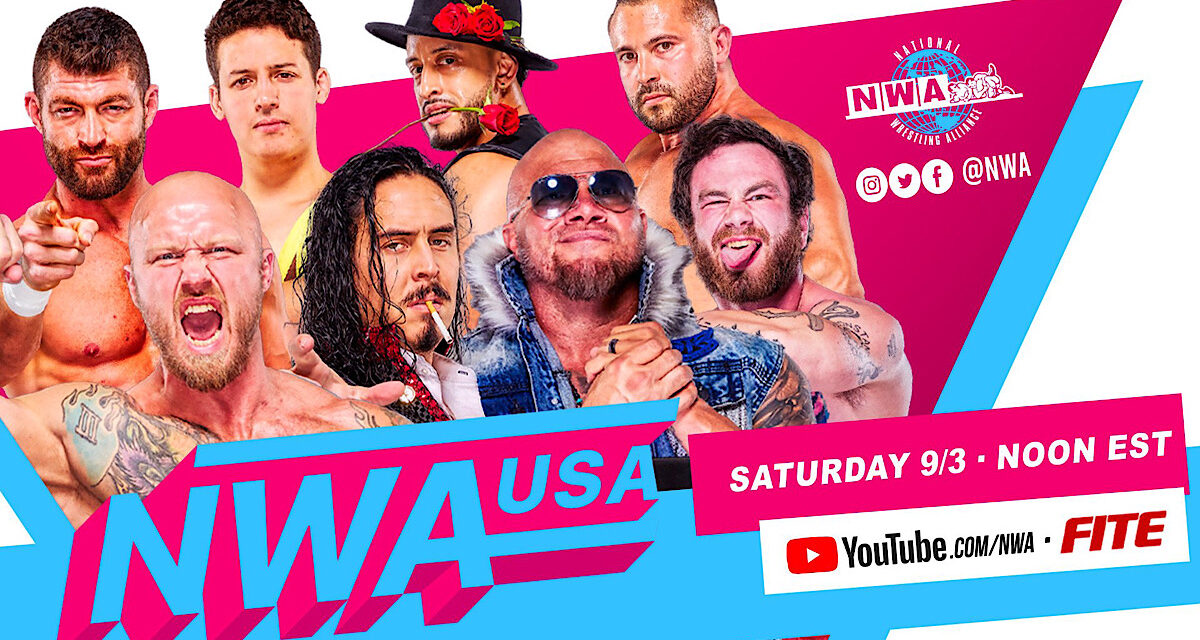 It’s Saturday, and time to enjoy NWA USA.  The premier episode of this Season has a four way battle.  Plus we will get qualifying events for the NWA National title, with Luke Hawx dabbling with Magic from Jake Dumas, and Jax Dane  wants to get back to his winning ways by going against Dak Draper after losing his title.

So let’s go to the SkyWay Studios in Nashville, TN.  Joe Galli, Tim Storm, and Velvet Sky have the call, but before we get to the First Match, Jamie Stanley and Colby Corino walks out to the Podium.  Stanley wants to offers the fans a gift in a wiiner, since Tennessee is full of losers like the Titans and it’s Corino.  So now let’s get to the First Match… 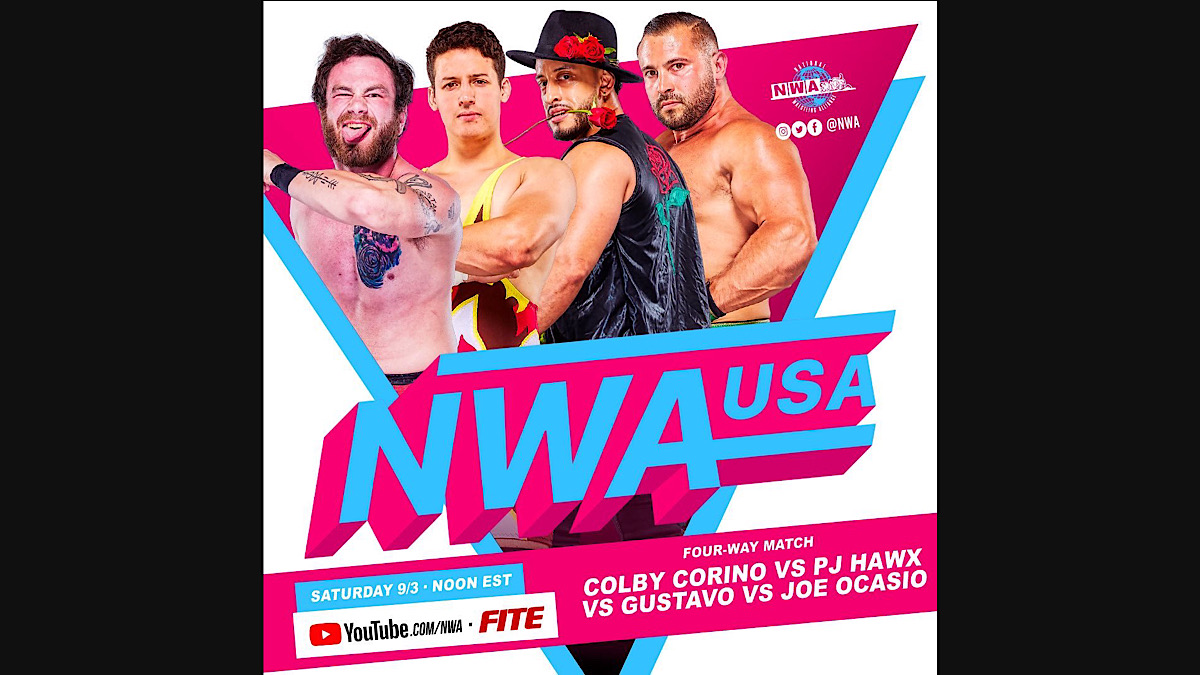 Colby Corino vs. PJ Hawx vs. Gustavo vs. Joe Ocasio

Stanley distracts Hawx from the start, and then Corino dropkicks him to the back.  Then Corino and Ocasio attack Gustavo, and the match goes all over the studio.  Hawx flies onto Ocasio and Corino with a crossbody outside the ring, and then goes in the squared circle and attacks Gustavo with suplexes.  Hawx goes for a delayed vertical suplex,  but Gustavo manages to reverse to a jawbreaker.  It does matter as Hawx nails Gustavo with a backbreaker to a gutwrench suplex.  Ocasio is back in to ring and gets Hawx in a lumbar check to cover, but Gustavo kicks him to disrupt the pin count.  Ocasio goes to a rollup, but gets pushed off by Corino.  Stanley cheap shots Ocasio from the outside, and Corino delivers the Sonsetter to win the four way battle.

At The Podium with Kyle Davis is the new NWA USA Tag Team champs, The Fixers.  Bradley wants to shoot off fireworks but Davis stops him because of building fire codes.  Instead, he and “Wrecking Ball” Legursky have…Rocket pops.

The Boss gets serious for a minute and shoots with the fans.  He says to get better, he said his prayers, took his vitamins that Legursky offered, and his elephantphitis is gone and now they won the tag titles.  Bradley also acknowledges that the NWA and The Mortons go together, and he want to bury the hatchet, and asks them to shake their hands.  They’ll take the high road, since Fixers rule, but they aren’t even around.  Not even for a Rocket Pop.  How sad.

May Valentine is backstage with Ricky Steamboat and Austin Idol.  Steamboat got his start in the NWA and he recalls how it catapulted him to stardom, and is happy that the same promotion is back on the rise.  Idol says it’s due to him, and his genius.  Valentine inquires about Idol’s “son” Cyon is second best, next to him of course.  Also, he is not crazy on the National title tournament and his boy shouldn’t have to go through that.  Steamboat contends that if aCyon is good enough with the competition, then he’ll be good enough to hang on to the belt. 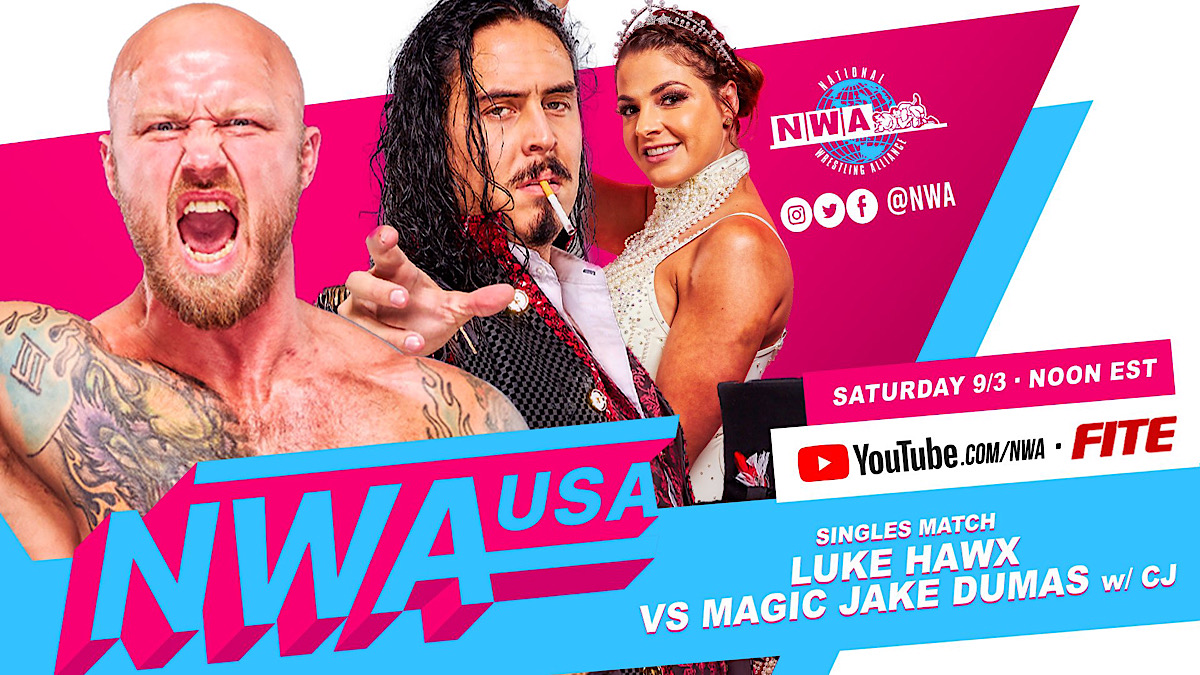 Luke is fired up and promises the fans at rings he’ll boot his @$$. As they tie up, Luke delivers on his word not once, but twice.  Luke gets the Magic one in a ammerlock, but Dumas channels his inner Houdini and  escapes the hold.  Each man tries to go hold for hold, but the veteran instincts of Hawx carry him through, and then he gets a powerslam for a one count on Dumas.

Dumas gets to the ropes where his assistant CJ is nearby.  Her costume involves playing cards in her hair, and Dumas pulls a card and palms it in his hand.  Luke turns him around, and Dumas slices his eyes and now he’s in control.  Luke tries to fight back, but Dumas keep on offense and gets a leg drop for a two count.  Dumas goes up the top turnbuckle for a moonsault but, as Galli mentions, there is “no water in the pool.”  Having caught his second wind, Luke goes on the attack with a spinning heel kick to cover for a two count.  He whips Dumas to the corner, but it gets reversed and he leaps but Dumas catches him midair, and and delivers a tombstone Piledriver to get the pin.

May Valentine is now with Colby Corino and Jamie Stanley, and she inquires why they joined forces.  Stanley humbly states that he is the best gift…correction:  second best gift to pro wrestling, and he coaches winners.  So he will be in the corner of Colby Corino.  Valentine ponders if Corino needs a manager, but Stanley contends he know about branding, as is he America’s Jawline (patent pending), so he knows about branding.  Corino wants to cement his legacy, get the NWA Junior heavyweight title, and put down Homicide for good.

Now for the Main Event, and the next NWA National Qualifying match… 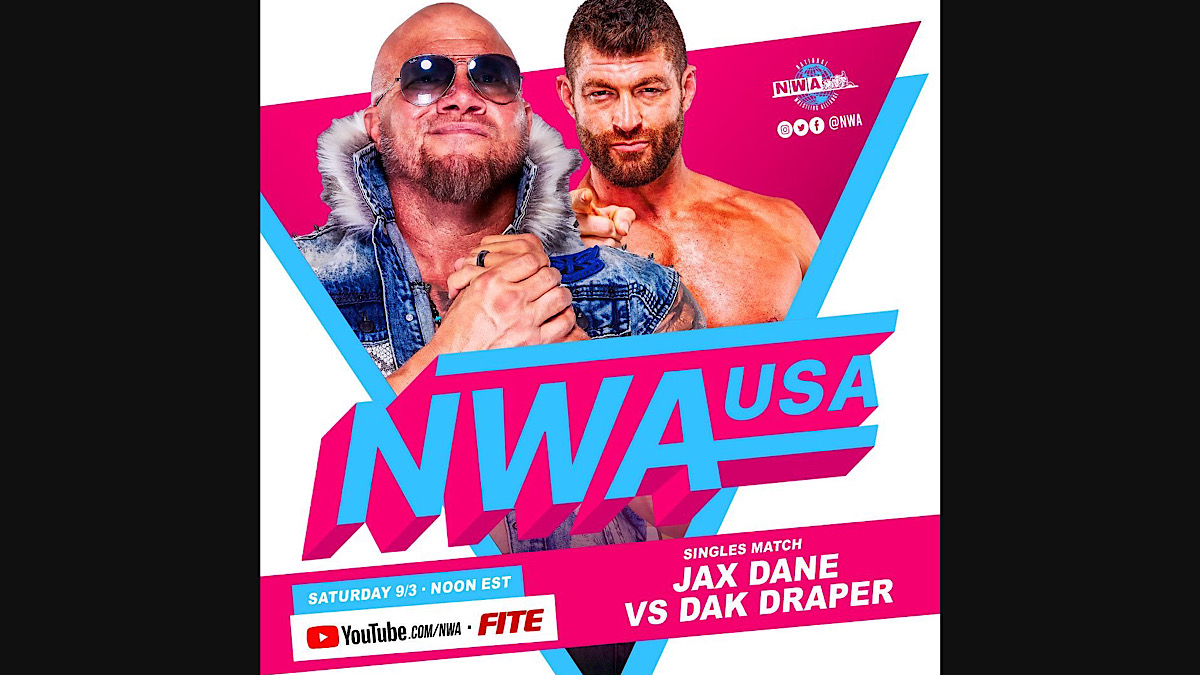 Nice to see another Ring of Honor alum make his way into the NWA, and I’m curious what he’ll have to showcase.  Dane is still smarting since losing his National belt on Night One of NWA 74, and you know he wants it back more than anything.

The bell rings, and we get a collar and elbow tie up, and Dane overpowers Draper right from the start.  He’s obviously feeling so confident, there’s no need to take off the fur vest.  A standing dropkick by Draper makes Dane roll out to reassess his strategy.

Now the fur vest is off, and he goes on the attack, but Dane gets springboard back elbow by Draper.  The Mile High Magnum is in the drivers seat, but a clothesline by The Dane Event stops him in his tracks.  Dane rushes into the corner, and gets another back elbow by Draper.  Now he’s fed up and stomps him down.  The ref tried to get control back in the match, and Dane shoves him off, no he calls for the bell, because…

Your Winner via Disqualification, and Advancing in the NWA National Qualifier Match:  Dak Draper

The NWA staff come out to restrain The Dane Event, and he is unhinged.  He almost attacks Silvio, but he manages to calm down his client.  Draper win, but Dane is none too pleased as the show goes to credits.

I dig the pairing of Corino and Stanley, and the National tournament looks like a great addition this season.  Dane losing his cool will add another layer to The Dane Event, and Dumas advancing can be a dark horse if he manages to pull more tricks up his sleeve.

For now, see you next Saturday.