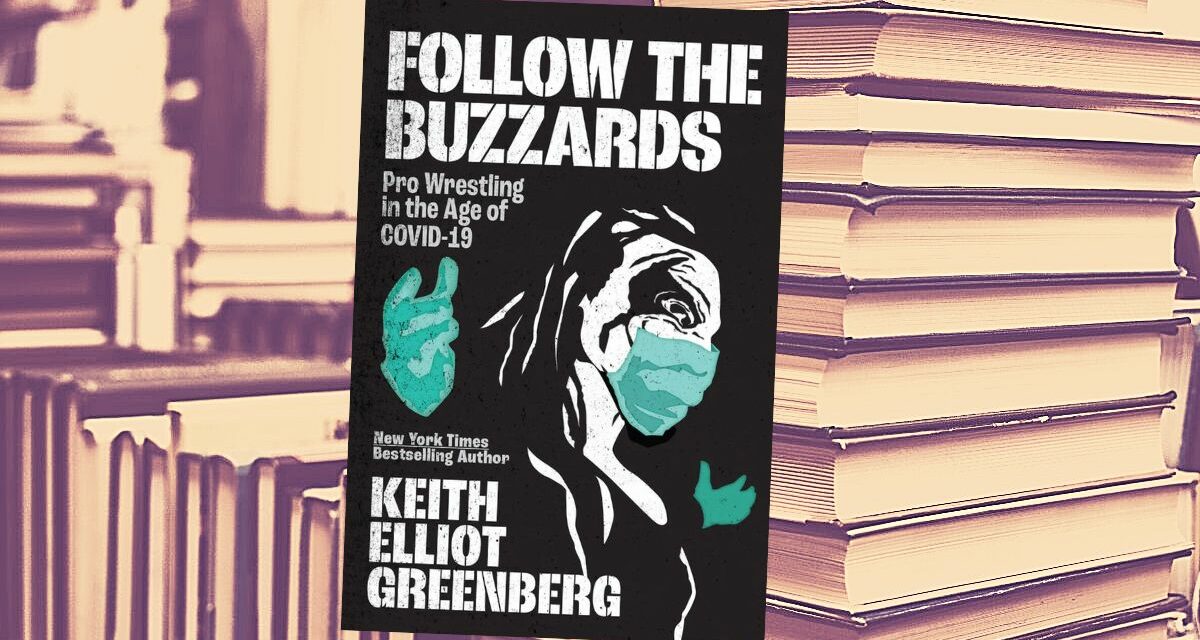 In Follow the Buzzards: Pro Wrestling in the Age of COVID-19, author Keith Elliot Greenberg attempts to chronicle the effects of the recent (current?) COVID 19 pandemic on professional wrestling, world events and broader society.

If you don’t know Mr. Greenberg by name, as a wrestling fan or reader in general you surely know his work. Mr. Greenberg has written extensively about wrestling and popular culture in general (including a series of true crime books, and broader works about The Beatles, Menudo, Jeff Healey and James Dean). He has written extensively for WWE’s in-house magazines and co-authored the autobiographies of Freddie Blassie, Superstar Billy Graham and Ric Flair. Full disclosure — I’ve read and enjoyed all three; in each case he does an excellent job of capturing his subjects’ voice and relates their stories, imperfectly as they may be told — notably the parts where Blassie and Graham can’t remember their ex-wives’ names.

He also co-authored the third and fourth editions of WWE’s Encyclopedia of Sports Entertainment and an as-yet unpublished Iron Sheik autobiography which, if captured accurately would be gonzo in the best Dr. Hunter S. Thomson way. More recently he has chronicled the state of the wrestling business outside of WWE, in Too Sweet: Inside the Indie Wrestling Revolution.

All of which is to say Mr. Greenberg knows how to write and capture a variety of styles; he also has indisputable credibility as a fan and participant in the world of wrestling from the biggest promotions to the smallest and has a keen understanding of where his subject falls in the greater scheme of things.

At best, this appeal to place wrestling in a proper social-political context is a challenge. Many fans look to pro wrestling as an escape from real life. The COVID pandemic shattered that illusion, changing how wrestling would be presented and offering frequent unwelcome reminders as touring stopped and stars got sick or sat out the most dangerous parts of the pandemic. Mr. Greenberg sets himself a difficult task. “History” requires judgment about the relative importance of events, and that only comes clear with time. It’s even harder in the semi-fictional world of professional wrestling, where history seems to be rewritten at a dominant promoter’s whim. In this case Mr. Greenberg is writing history as it happens; political, economic and entertainment events crashing into each other during the chaos that was (and many would still say ‘is’) the COVID-19 pandemic.

And still, for being focused on very recent history, there are some events which in hindsight raise eyebrows. President Donald Trump’s appeal to his Ukrainian counterpart, Volodymyr Zelenskyy, for dirt on rival Joe Biden’s son’s involvement with an energy company in exchange for defense resources reads differently since this formed the basis of one of Mr. Trump’s impeachments and foreshadowed the current crisis in Ukraine at the hands of Mr. Trump’s would-be ally Vladimir Putin.

What’s clear is the breadth of the pandemic’s effect on professional wrestling worldwide. Mr. Greenberg effortlessly switches gears from WWE and AEW to the independent scene, to Japan, showing how badly COVID collapsed an industry based on fans packing arenas and performers working in very close quarters with each other. He calls out the Reigel Twins, independent wrestling hopefuls left stranded on either side of the Atlantic when COVID first hit, and notes how New Japan Pro Wrestling was forced to cancel its prime arena show, Wrestle Kingdom, and toggles between recaps of major wrestling cards and fan reactions.

Mr. Greenberg tracks key changes inside the business as well. For a business based on connection-with live arena crowds and literal physicality between wrestlers, COVID left promotions large and small, and wrestlers themselves scrambling to preserve whatever revenue streams would keep them solvent. Some, like New Japan would cease operations altogether over a period of months. Others like Ring of Honor or Impact Wrestling would attempt to hold TV tapings in empty arenas. AEW, which had the luxury of a Khan-owned event space, was still able to hold shows and used wrestlers and other personnel to fill in for a paying crowd. This strategy may have actually helped build a few stars — the Gunn Club and the Acclaimed made the most of their screen time. WWE attempted several strategies, from a plexiglass covered Performance Centre to a reliance on ‘cinematic’ matches using fewer people taped off site, to the supposed grittiness of Shane McMahon’s Raw Underground experiment (which hurt more stars than it helped similar to the old Brawl for All), to better luck with the Thunderdome which placed fans on screens surrounding a series of ever bigger arenas. Wrestlers themselves grew more enterprising, finding new online outlets for merchandise and embracing streaming services ranging from live gaming to adult content. 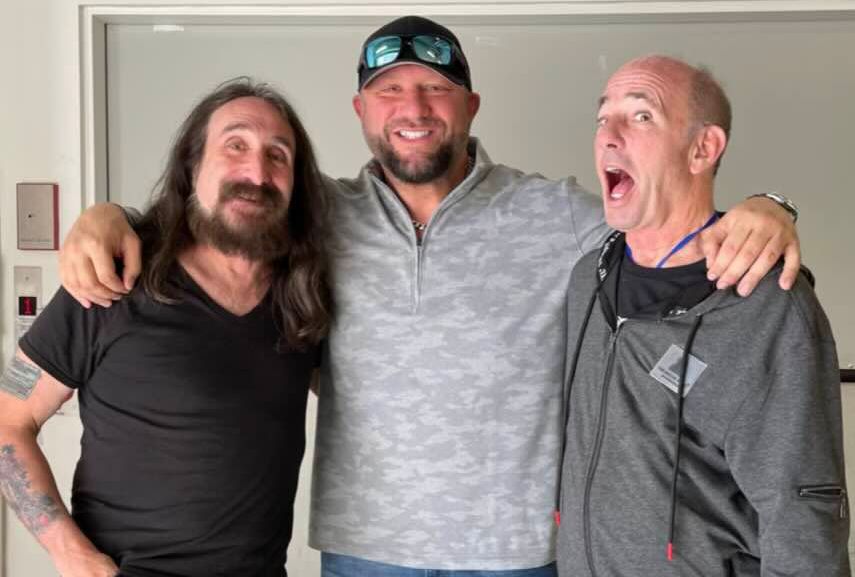 He also notes a shift in WWE’s approach to business. After years hoarding all available talent on the independent scene (perhaps in a bid to limit AEW’s growth) WWE embarked on waves of mass releases which continue to this day. Suddenly, talent who had been employed for over a decade were handed their walking papers, whether main eventers like Braun Strowman or mid-carders like Matt Cardona. A host of acts who’d gotten themselves over with fans in NXT — either as WWE’s ‘developmental’ show or a stand-alone brand would also be released outright, or brought up to the main roster, rebranded or saddled with go-nowhere gimmicks, and released quickly once their new personas failed to catch on. Ironically, the man whose catchphrase would become the title of Mr. Greenberg’s book would be one of the millions who lost his job during the pandemic. On July 31, 2021, Bray Wyatt was released from WWE.

Fans have viewed these releases harshly; WWE’s actions were (and are) seen as cruel and greedy, costing people their jobs at a time when most promotions were grounded-limiting stars’ ability to make up for lost wages or merchandise sales — and corporate profits hit record highs… and at the same time as other companies like Impact and Ring of Honor and All Elite Wrestling made a point of retaining and paying talent, even if they couldn’t run shows. In Ring of Honor’s case, this may have been a fatal decision, as it would later cease operations and release its whole roster, until AEW’s Tony Khan would purchase it and start trying to rebuild as an ancillary brand.

Tracing the creep of the coronavirus through politics and business and media makes for an eerie read, especially when politicians like Mr. Trump and British Prime Minister Boris Johnson actively downplay its spread or resort to xenophobia in a bid to minimize its effects on their countries’ economies. Early pandemic attempts to promote social distancing during the race for the Democratic Presidential candidacy seem muddled, as much an exercise in messaging while scientists worked to figure out just what the heck was going on.

Follow the Buzzards is a thorough, engaging, fast read. Readers who follow the news — either pro wrestling related or beyond — will easily recognize the key events and personalities which make up the bulk of the story. How could they not, seeing as how they’re within living memory of anyone who’s survived toddlerhood? I think in some respects we’re still at that stage.

Follow the Buzzards: Pro Wrestling in the Age of COVID-19 is out October 4, 2022 from ECW Press.