AEW Dynamite: CM Punk gets fired up to face Moxley at All Out 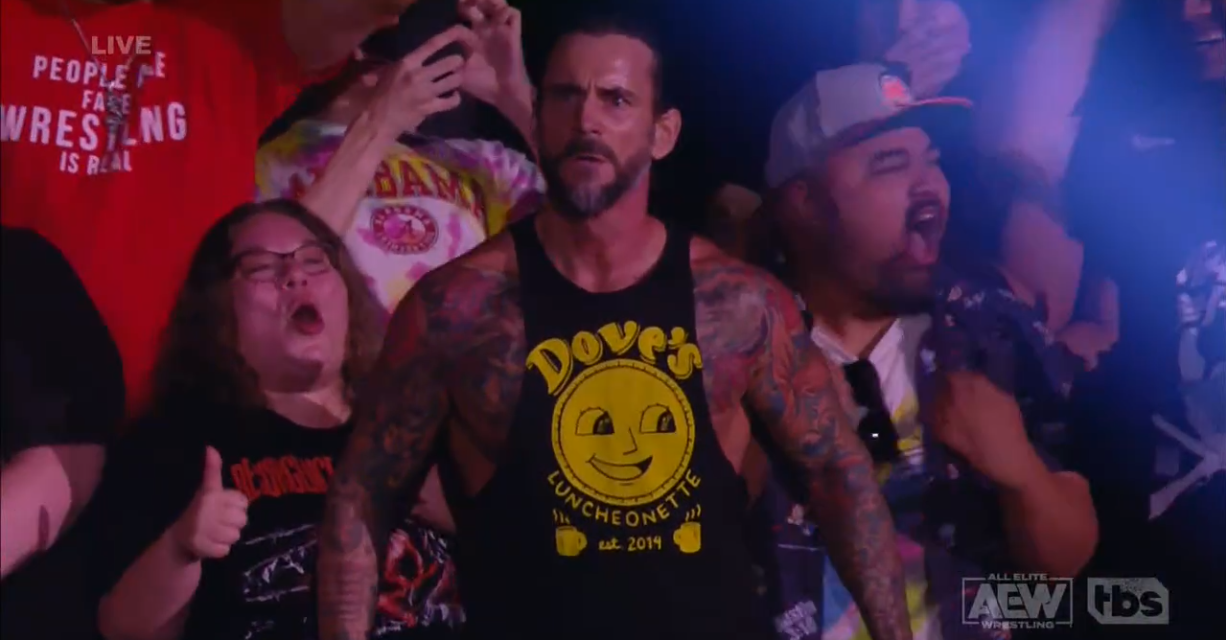 All Out is just days away; the AEW champion, Jon Moxley doesn’t have an opponent for Sunday after defeating CM Punk last Wednesday, unifying the AEW title. The “go home” show has some work to do in Chicago; which just happens to be CM Punk’s hometown, if you didn’t know. Let’s get to the action.

Moxley opens the show, taking a victory lap, but the crowd is split. He calls out Punk for only lasting three minutes last week. Mox provokes the Chicago crowd by making fun of Punk. He says Punk folded; has a fragile ego, body and  a weak mind. Moxley announces that he has an open contract for an AEW Championship match on Sunday at All Out. He leaves the paperwork in the ring.

Backstage producer, Ace Steele, walks out to the ring and retrieves the contract.

Chris Jericho names Bryan Danielson the real American Nightmare this Sunday. Daniel Garcia apologizes to Chris for what happened last week and pledges his loyalty to the Jericho Appreciation Society.

Hager pounds Danielson into the corner and then tosses him across the ring. Jericho argues on commentary with William Regal during the match. Hager goes to the floor and Bryan connects with a suicide dive, but Hager catches him coming off the apron and drives him through a table at ringside. Hager keeps the punishment up by slamming Danielson into the ring post. He follows with a suplex on the floor. Back in the ring, Hager with elbow strikes on the mat. Hager with a powerslam out of the corner.

He mounts Danielson atop the corner turnbuckle, slapping him across the chest. Bryan recovers, connecting with a missile drop kick. Danielson ducks a right and chops Hager down with kicks. He unleashes the flurry of kicks and covers for a two count. Hagar pummels Bryan on the mat. Danielson nearly gets the triangle choke locked in, but Hager counters with a power bomb. Bryan applies the Lebell lock, but Hager counters into an ankle lock. Danielson rolls though and applies another Lebell lock. Hager gets to the ropes to break the hold. Bryan chops away at Jake in the corner. He gets caught on the running drop kick and slammed to the mat. Hagar misses on a clothesline. Danielson connects with the running knee and covers to get the win.

At the bell, Angelo Parker and Matt Menard attack Bryan. Claudio Castagnoli and Wheeler Yuta run down to make the save. Jericho takes advantage of Danielson being alone in the ring, running down with a chair. Daniel Garcia runs down and disarms Jericho. Danielson hits a distracted Jericho with the running knee. On his way up the ramp, Bryan thanks an upset Garcia for the assist.

The Wingmen are in the ring, protesting their lack of screen time. Come to think of it, I can’t remember the last time these guys were on TV. Morrissey makes his way to the ring, taking out all four Wingmen. Stokely Hathaway likes what he sees, making his way to ringside.  They leave together, before being stopped by Tony Schiavone. Hathaway tells him that what he is doing is none of his business.

Hayter and Shida trade shots to open the match. Shida spikes Hayter into the mat face first and Toni tags in. She kicks Hatyer into the corner and Shida delivers a hammer blow off the top ropes. Storm follows with one of her own. Baker gets the tag and runs into a drop toe hold. Hayter trips up Storm from the apron and then beats on her leg.

After a commercial break, Storm with a DDT off the turnbuckle to Hayter. Shida gets the tag, pummeling Jamie in the corner. She hits a vertical suplex and follows with a meteora off the ropes. Baker breaks up the pin. Hayter fights off a double team, suplexing Shida and Toni at the same time. Britt hits a neck breaker on Shida, but can’t get the pin. Shida yanks Hayter off the apron and Storm hits her with a DDT. Back in the ring, Shida uncorks a spin kick. She covers Baker and gets the three count.

Pac grants Kip Sabian a match at All Out for the All-Atlantic Title.

Miro, Sting and Darby Allin call out the House of Black for Sunday.

CM Punk makes is way to the ring and his doesn’t like very happy. He talks about how he pulverized the bones in his foot on June 1st and a week later he had surgery, placing 1 screws in said foot. He then takes a verbal jab at a guy in the crowd. He knows he came back to early from injury. Something didn’t sit right, Punk says he was 100% after being cleared by doctors, but it’s a new 100% and he isn’t sure if that is good enough. Punk came back because he loves the fans, and they love him back. He feels like he let them down. Maybe love just isn’t enough. Ace Steele comes out to give Punk a pep talk. He reminds Punk how he has fought from underneath his entire career. He shoves the contract into Punk’s chest. That speech did the trick, and maybe the slap to the face, too. Punk takes it into the crowd and signs the contract to face Moxley at All Out.

Earlier today, Jim Ross sat down with Jungle Boy and Christian Cage on the grounds that it won’t get physical. Cage says that isn’t an issue and tells JB that he isn’t in his league. Jungle Boy cares about Cage and wants to believe that Christian felt the same way. Cage says he is just here to make money. Jungle Boy tells him that this Sunday he will be facing Jack Perry.

Wardlow and FTR vs. 3 random jobbers

Sanjay Dutt is watching with interest back stage. FTR with the Big Rig and Wardlow conducts the Powerbobm Symphony to get the pin.

Winner via pinfall: Wardlow and FTR

Evil Uno tells Tony Schiavone that Preston Vance is injured and cannot compete in the Trios tournament. Andrade El Idolo interrupt, trying pay them off. Evil Uno turns him down and takes a beating, while Vance gets hit with a stun gun.

Dante Martin vs. Wheeler Yuta vs. Rey Fenix vs. Rush

Martin and Fenix fight on the floor and Yuta and Rush face off. Rush fights off an octopus and powerslams Yuta. Dante Martin hits Rush with a springboard cross body. Fenix hits Martin with a poisonrana and then takes out Rush on the floor. Wheeler Yuta takes to the air, taking out Fenix and Rush. Martin one ups them all with a corkscrew off the ropes to the floor.

After the break, Rush hits Martin with a release German suplex. Rush with a straight jacket piledriver to on Martin, but only gets a two count. An enzuigiri from Fenix sends Rush to the floor. Fenix with a gut wrench to Martin and a powerbomb. A kicks sends Rush to the floor. Martin with the poisonrana to Fenix. Yuta knocks Martin off the top rope. Fenix leaps from the top turnbuckle to take out Rush on the floor. Yuta misses the foot stomp but lands on his feet. Wheeler then uses a seatbelt rollup to get the three count on Dante Martin.

Tony Schiavone is in the back with Alex Reynolds and John Silver and they are fully prepared to continue on in the trios tournament with out a third. Hangman Adam Page offers to team up with them this Friday in their Trios Tournament match.

Ospreay kicks Omega in the face at he bell. He answers with a shoulder block. The two trade shots in the middle of the ring. Ospreay beats Kenny into the corner and stomps way at him. The Bucks leap into the ring and fight off Aussie Open. Omega with hard chops to Wil. Omega shoots off the ropes, but Omega sends him to the outside. On the floor Aussie Open sandwich the Bucks together and Ospreay takes them all out with a sky twister.

After a commercial break, Mark Davis is fighting off both Bucks in the ring. He then slams both Matt and Nick at the same time. Kyle Fletcher hits an assisted cutter. Matt fights off Kyle and Mark, hitting Davis with a rana. Omega tags in and kicks Davis in the knee. Omega hits Fletcher and Davis with snap suplexes. Ospreay with a kick to Omega and follows with a hurricanrana. Ospreay leaps over the top rope and lands on his feet, too bad it’s right in front of Omega, who delivers a snap suplex. Fletcher and Davis catch Kenny climbing the turnbuckle. They hit Omega with a delayed superplex. Ospreay tags back in and rips the shirt off of Omega. He drills Kenny in the back and then hits a spinning back breaker. Omega kicks out of the pin.

After the final commercial break, Nick Jackson with a destroyer on Ospreay and then a dual facebuster to Davis and Fletcher. Nick with a somersault splash but Ospreay blocks it with his knees. Wil with a snap suplex to Nick and mocks Omega. Kenny tags in and the two trade slaps. Ospreay counters a clothesline into a Liger bomb. Nick Jackson counters Ospreay spring boarding off the ropes with a cutter. Fletcher gets hit with the BTE Trigger. Ospreay saves Fletcher from a piledriver. Fletcher is able to reverse and with an assists from Wil hit Matt with a piledriver. Jackson kicks out. Ospreay wants the Hidden Blade, but is cut by a knee from Omega. Fletcher goes to a Super kick Party and has a bad time. Omega gets hit with a running knee from Wil. Ospreay gets caught by the Bucks and hit with the Indie Taker. Wil isn’t the legal man, though. Omega gets Fletcher in his sights and hits the pump knee. He follows with the V Trigger. Omega hits the One Winged Angel on Fletcher and covers to get the win.

Winners via pinfall: Kenny Omega and the Young Bucks

That’s the show; see you next Wednesday!

Oh CM Punk lost last week in under three minutes, well after tonight that doesn’t matter. Punk got fire lit under him by Ace Steel so let’s GOOOOOOOOOO for All Out. And speaking of fire, the fatal four way was great, but find a way to watch the trios tournament match. Wil Ospreay, Aussie Open, the Young Bucks and Kenny Omega put on show.