Considered as one of the greatest heels of the 20th century, Freddie Blassie’s new autobiography is filled with stories of sex, blood and money.

The newest book published by the WWE, Listen, You Pencil Neck Geeks, is from a man who very few fans today remember. His prime was in the early 1960s, and some fans may remember him as a manager from the late 1970s through the mid-1980s. But those that do remember know he was great. 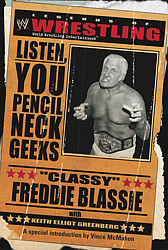 His epic battles in Atlanta, New York, Japan and Los Angeles are considered the best at the time and some matches are still talked about today. Few know that although he made his greatest name in Los Angeles, his home was in Atlanta.

And that distance, mixed in with the glamour, was rough on his family. Although he was married with kids, the women were all over him on a daily basis. He doesn’t hide the fact that he was sleeping around throughout his marriage. He never went back to the hotel alone.

One of the most interesting parts of the book is his first venture to Japan. He had lost the WWA Title to Japanese legend Rikidozan in Los Angeles and traveled to Japan to claim his belt back. Blassie, known for biting his opponents with his sharp teeth, got off the plane in Japan with the Japanese press waiting for his arrival. Some had called him a vampire, and Blassie responded by pulling a file out his bag and filing his teeth for the cameras. That was all it took. He became the one of the biggest heels in the country from the next decade.

Although money was great, kidney surgery at the age of 47 took away almost everything he earned. Just years before, he was one of the top 10 workers in the world, but in 1966 he was selling cars. While he could not work in the ring, he had to make money somehow.

Blassie was still going strong at the age of 50. He had a new wife that was 28 years younger and headlining around the world. And the unthinkable happened. Los Angeles’ Latino fans began to cheer for Blassie. Blassie began to team with Ray Mendoza, wear a sombrero and the crowd ate it up.

His career in Los Angeles was over, because of regulation over his age, and he ended his career in New York as a heel contender for Pedro Morales’ WWWF Championship.

Blassie was so liked by the McMahon family that they offered him a job as a manager. Along with The Grand Wizard and Captain Lou Albano, he was as hated as a manager as he was a wrestler.

The book is filled with stories from those who knew Blassie in the business. Dick Beyer, George Steele, Hulk Hogan and others told often hilarious stories about the controversial Blassie. Even Regis Philbin, who hosted a late-night show in southern California in the early 1960s, shared some stories.

Although some stories are exaggerated, the book is one of the better books put out by the WWE. His inside stories about his personal life, along with his wrestling life, make the stories always interesting. Long-ago tales of what a heel had to go through during his era are brought back to life.

The book is a must for any fan who remembers Blassie as a wrestler. I never saw him wrestle, but often read about his career. I only remember him seeing him as a manager, and although the book covers that part of career, it was the wrestling part that was the most interesting.