My Breakfast with Blassie: An appreciation

Though many wrestling fans may have heard those lyrics before, not as many understand the reference. That’s a shame, particularly in light of this week’s passing of wrestling legend, Classy Freddie Blassie. The lyrics, written by REM in their tribute to late comedian Andy Kaufman, refers to Blassie’s participation in Kaufman’s cinema verite piece, My Breakfast with Blassie, a must-see for fans of either man. 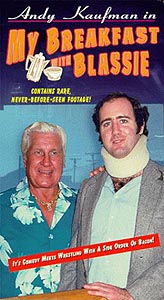 The movie’s title and premise are parodies of the 1981 art-house classic My Dinner with Andre, which documented playwright Wallace Shawn’s dinner with his old friend, theatre director and renaissance man Andre Gregory. The movie consisted of the two men sitting in a restaurant, carrying on a meaningful conversation about life, art, and philosophy in between dinner courses. Though Breakfast is quite similar in terms of plot and style, that’s where the similarities end.

For those unfamiliar with Kaufman’s work (and if you are not, I suggest watching Man in the Moon, the bio-pic from a few years ago starring Jim Carrey), his comedy could best be described as shoot-humour, to put it in wrestling terminology. More of a prankster than a joke-teller, Kaufman would use a mixture of humour and hostility to entertain and at the same time provoke his audiences.

One celebrated period in his life was his foray into wrestling. In the early 1980s, Andy proclaimed himself the Intergender Wrestling Champion. As part of his standup routine, he would go into heel mode and fling insulting comments towards the women in the audience until one of them would be goaded into fighting him in the ring. Kaufman boasted that his career was 400-0 against women. Eventually, his antics caught the attention of Jerry “The King” Lawler, the Southern Heavyweight Champion at the time.

Lawler took offense at the actor mocking the sport and its fans, and challenged Kaufman to a one-on-one match. In the ensuing battle, Kaufman was injured, and he was forced to wear a neckbrace for some time.

Breakfast takes place shortly thereafter, the premise being that Kaufman wanted some advice on his wrestling career, after his major setback against Lawler, and for this he sought direction from Blassie, who was making a name for himself as a notorious heel manager. My Breakfast with Blassie is the on-screen chronicling of that meeting.

The movie takes place in real time, and we see the entire meeting between the two over a friendly breakfast at a downtown Hollywood diner. At once, Blassie shows himself to be a down-to-earth, no-nonsense individual. He chastises Kaufman for thanking the busboy who seats them. “What did you thank him for,” he says to the polite comedian. “He didn’t do anything he wasn’t supposed to do. You don’t have to be that nice.” Later on, he Blassie turns his heel persona on and off like a light switch. He charms the pregnant waitress with some friendly banter, only to reveal after she leaves that he did that so they wouldn’t have to leave as big of a tip. Later on, after he playfully rubs her belly much to the waitress’ delight, he uncharitably tells Andy, “There’s another mouth we’ll have to feed on welfare.”

Unlike in Andre, where the characters converse intelligently about mankind’s ongoing struggle to maintain creativity in the modern world, Blassie and Kaufman’s banter is less philosophical. Blassie tells Andy stories of his career in Japan, notably the infamous teeth-filing incident, and the number of heart-attack deaths he was responsible for when Japanese fans got frightened while watching him at work. He runs down the multiple injuries he’d sustained over the years, including being blinded in his right eye by an object thrown by an overzealous fan. And how, despite all of the bad things that happened to him, his passion for wrestling never faded. “If I had to do it all over again,” he tells Kaufman, “I’d do it twice as much, and twice as often, and twice as hard.”

Later, the two discuss the negative aspects of being a celebrity, most notably that fans always ask for autographs in public places, frequently interrupting their private time. It’s this issue which highlights the fact that the “real life” movie is nothing more than a vehicle for Kaufman to continue with his wrestling shtick (though, this may not have been as obvious back in the 1980s, since at the time, the veil of “sports entertainment” had not been lifted – in fact, until the truth was revealed in the Carrey movie, many people actually believed that Lawler and Kaufman genuinely hated one another for years).

Their conversation about having to deal with bothersome fans is overheard by a group of women at the next table, one of whom Kaufman signed an autograph for earlier. The women take offense to the comments, countering that the celebrities would be nothing without their fans. Kaufman goes into his wrestling character, and insults the women, angering one of them so much, that she actually gets up and physically attacks him.

It’s unclear at this point in the movie if Blassie is indeed in on the joke, or if he, along with the viewer, is just another victim of one of Andy’s pranks. Watching him react, one can’t tell if he is just playing the part perfectly, or whether he actually believes Kaufman has provoked the woman enough for her to assault him. If the former, it’s a brilliant performance, as Blassie appears genuinely impressed with Kaufman’s ability to draw heat from these strangers. If the latter, than it’s even more funny, especially seeing Blassie beam like a proud father when Kaufman turns on the chauvinism and encourages one of the ladies to “get back into the kitchen where you belong, and wash pots and pans, and raise some babies.” Blassie’s appreciation for the fine art of heel-dom is undoubtedly one of the reasons he was one of the most successful ring villains ever.

Another scene right at the end of the movie further calls into question Blassie’s knowledge that the whole movie was a work. In a disgusting sequence, another “fan” comes to the table where the men are finishing their meal. The fan, really Kaufman’s real-life best friend and co-conspirator Bob Zmuda, proceeds to vomit all over the table. Blassie looks truly disgusted by the act, and nearly gets ill himself. The look of horror on his face over what has just happened looks too real to be scripted. We’re not sure that Kaufman hadn’t devised this whole breakfast scenario just to play a mean-spirited trick on Blassie, with the vomit spot being the payoff. Or whether Blassie knew it was coming, and sold like the consummate pro that he was. Either way, the viewer is ultimately rewarded with some justice, as Blassie sticks Kaufman with the bill. And the crowd goes wild.

The breakfast mess concluded, Kaufman and Blassie go their separate ways, possibly never to see each other again, their memorable meeting captured on film for evermore.

In real life, Kaufman died fairly soon after the movie was released, at far too young an age. Blassie, as mentioned, died earlier this week at the ripe old age of 86. Their legacies live on, however, in the hearts and minds of their fans. And for anyone who has seen My Breakfast with Blassie, their names will be forever linked. Yeah, yeah, yeah, yeah.