Box Brown surprised the literary world when his graphic novel about Andre the Giant became a New York Times Bestseller. This time around, Brown has taken on a subject that has mesmerized pop culture and wrestling fans for decades, Andy Kaufman.

Is This Guy For Real? The Unbelievable Andy Kaufman is Brown’s latest graphic novel that focuses on the lifelong love the comedian had for professional wrestling. At 257 pages, the author, who is also the illustrator, took an in-depth visual and descriptive approach to Kaufman’s life. 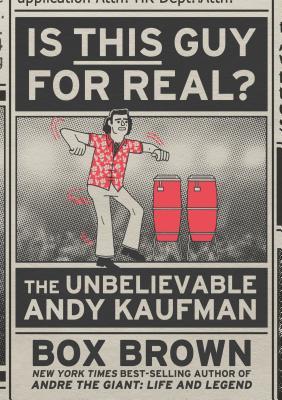 Andy Kaufman’s story has been told many times over in print, TV reports, and even a movie (Man on the Moon with Jim Carrey), but none really dove in to the true influence that wrestling had on his life. It became apparent while reading this book that the author was willing to show Kaufman in an honest light that wasn’t always rosy. Wrestling, at times, seemed to drive his creative side and also alienate others.

Another aspect about this story is the wonderful and rich details that were woven throughout this story. The abundance of detail is not just as a result of finding great reference material, but from interviews with Kaufman’s brother and friends. These personal experiences shared by those who were close to Andy certainly gave a new layer to the legend of Kaufman in the sport of wrestling especially in his women’s wrestling phase.

This graphic novel is best suited for teenagers and an older audience. Some of the content is a little too racy for younger readers. It is this darker information that really shows Kaufman not just as an entertainer, but as a person who is not on all the time and has his own desires and needs.

An aspect of the story that I really enjoyed was Andy’s need to make connections. He wanted to reach the audience and get a reaction. He wanted to learn and create with others. He wanted to make friendships. A showman at heart, he was a person who loved collaborating and opening up to those who made the time to understand him. While a common, human story, we must remember Kaufman was on stage and screen where those relationships might have been hard to make.

Recently SLAM! Wrestling was able to ask author/illustrator Box Brown a few question about his interest in professional wrestling and about his latest offering Is This Guy For Real? The Unbelievable Andy Kaufman:

SLAM! Wrestling: Is This Guy For Real? is your second book that looks in to the world of professional wrestling. What is it about the genre that made you decide to write/draw about it?

BROWN: I’m an obsessed wrestling fan from way back. Pro wrestling seems to creep its way into all of my work. I often relate things in my life to stuff I learned from wrestling. Bobby Heenan’s advice about playing an idiot replays in my head often, “if you’re supposed to be an idiot, you can’t screw up!”

SLAM! Wrestling: The story of Andy Kaufman has been told from many angles over the years, especially in wrestling, how did you bring a unique lens to Andy’s story?

BROWN: I just wanted to tell his wrestling story really. I always thought that part gets breezed over. It’s kind of a footnote, where Andy drifted into madness. But, that’s really what lead me to his work in the first place. I wanted to delve into it all. The more I did I saw that wrestling really influenced his other work in a big way.

SLAM! Wrestling: Your sources and personal interviews that are listed in your bibliography are impressive. How did you convince Bob Zmuda, Ted Greenberg, Mark James, Michael Kaufman to participate in your project?

BROWN: Well, it really didn’t take much convincing once I got in touch with people. Everyone was very generous and happy to talk about Andy. It was a real thrill for me as a fan and as a biographer.

SLAM! Wrestling: Throughout the book I was struck by the honesty in which Andy was portrayed. Was there ever any reservation about showing the different sides of his personality?

BROWN: Of course, I was apprehensive but I also think it’s important to portray a person as a whole being. We’re not angels, we’re complex individuals all of us. It’s important to remember that these larger than life figures are humans.

SLAM! Wrestling: I would think that you are a fan of professional wrestling. Who were or are some of your favourites of the ring world?

BROWN: Bret Hart was always my favorite going back to WrestleMania 2 when they (The Hart Foundation) almost threw Andre over the top rope. I loved Bret as a tag team and then singles wrestler and then into the Screwjob years. I loved his book too, one of the best.

SLAM! Wrestling: It really is amazing that Andy Kaufman is still so talked about today. Have you had any feedback from wrestlers, performers and friends about the story you told about Andy?

BROWN: Not too much yet, but Bill Apter texted me this morning saying he’s excited to be in the book. I hope he likes it.