There are some pretty big challenges when making a graphic novel on Andre the Giant. Fitting him on the page and drawing him to scale compared to other people and objects, for example. But for artist Box Brown, that was all part of the fun. 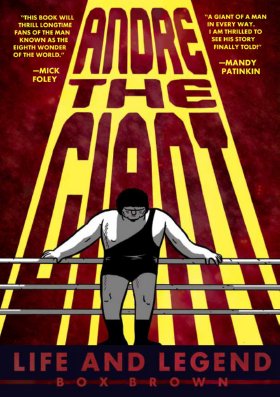 The genesis of the project, Andre the Giant: Life and Legend, came about with a bit of rare down time for the Ignatz Award-winning Brown, a 10-year veteran of the comic industry best known for Bellen!, Everything Dies and Love Is a Peculiar Type of Thing, and whose work has appeared in Mad Magazine, and Wired.com. He had just finished a major project, and with a comic book convention approaching, he wanted something new and unique at his table to sell. He came across a reference to famed playwrite Samuel Beckett driving a young Andre the Giant to school in the back of his truck in France, and started doodling.

That mini-comic lead to more.

“I just kept looking up more stuff on Andre and making them into comics,” Brown told SLAM! Wrestling. “At first I wasn’t super interested in getting the facts straight — I just wanted to make cool comics.” With his work approaching 100 pages, he contacted publishers, and First Second Books jumped at the chance to put the graphic novel out.

Its official release is on Tuesday, May 6. Brown, who calls Philadelphia home but was raised in New Jersey, has his first appearance to promote Andre the Giant: Life and Legend at the Toronto Comic Arts Festival May 10-11.

The comic takes Andre Rousimoff from his early days in France to the wrestling rings of the world, telling his story along the way. Brown relied on a variety of sources for the storyline, including shoot interviews, books and DVDs, and a few people he talked to himself.To make the book accessible to non-wrestling fans, Brown goes to great lengths to explain his process, which doesn’t happen in a lot of similar books. There’s an introduction that explains how pro wrestling works and how stories tend to get exaggerated, and a bibliography which lists his primary sources.

“I hoped, as best as I could, to get it as correctly as I could. If there’s stuff missing, it’s because I really couldn’t get enough info,” Brown confessed.

Getting “worked” with stories blown out of proportion through the years is just a part of professional wrestling, he said.

“I feel like even if I had more of an inside reach, at any moment, I could have been getting worked in person,” he said. “I think that anytime people in the business are on camera or are being recorded, even if it’s under the auspices of being the truth, those characters are still just exaggerating. It’s hard to explain. It’s hard to know what the truth is or if the truth even exists. It does. Stuff happened. But everyone is telling the story and the truth gets skewed.”

There’s a pretty long section about a real fight between Andre the Giant and Blackjack Mulligan in Japan in the book. Brown talked to Mulligan — “he stands by the whole story” — but has also heard the story from Barry Darsow where other than the primary combatants, everything else is different.

While getting the story straight was a challenge, it was dwarfed by the need to get the proportions right.

“I didn’t really care too much about getting it exactly right — I just always wanted Andre to look huge,” he said, continuing. “Even if you draw Andre in a normal situation, like in a chair, he looks so much larger than in real life. It’s so exaggerated.”There are plenty of panels to illustrate the size differences, including one with Andre holding a tiny phone.

Watching the movie I Like To Hurt People where Andre appears really helped, said Brown. Unlike when he’s in the ring, often with other big men, the shot of Andre exiting a Jeep helped him get the needed scale. “You have in your mind an idea how big a Jeep’s door is. You see Andre’s hand coming out, and it covers half the door. That was the best example of how big he really was.”

Unlike the 2009 WWE-published book Andre the Giant: A Legendary Life, Brown’s take on the big man doesn’t shy away from some of the controversies, like his notorious temper and the daughter he had and only saw a couple of times in his life.

While his feet are decidedly in the comic world, including his micropress Retrofit, Brown is definitely a wrestling fan and is confident other wrestling fans will love the book

“I think they’ll like it. My publisher won’t want to hear this, but I was really only thinking about trying to please the nerdiest of wrestling fans out there,” he said. “I really wanted to make sure that somebody who listens to Dave Meltzer’s show every day would like it — in addition to people maybe not knowing much about wrestling.”

Fortunately, his editor wasn’t a wrestling fan, so Brown went to great lengths to explain the language and terms in the text, often as footnotes.He does see a lot of similarities between pro wrestling and the comic book industry, and gets fired up defending both.

Some people “definitely think of comics as a low art form,” he said. “Then there’s people that will argue that wrestling isn’t an art form but if it is, it’s certainly a low art form. So I like the idea that they’re both considered low and a silly thing, but they’ll always win people over. Wrestling would have to win somebody over with what they can do. I believe that wrestling as an art form can be transcendent — and I believe the same thing about comics.”