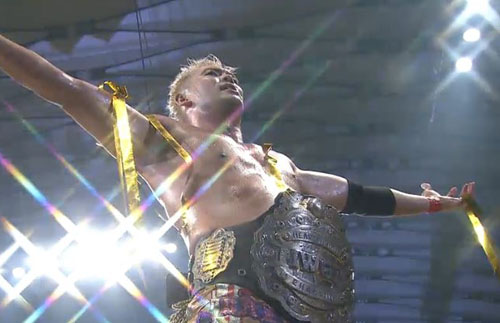 Count that as 601 days. As many expected, IWGP Heavyweight Champion – Kazuchika Okada – fended off the threat of Los Ingobernables de Japon’s Sanada at New Beginning in Osaka, without Gedo at ringside.

At the start of the match, Sanada took Okada down to the mat with a grinding headlock. Okada reversed things into a hammer lock. Stunning Okada, Sanada executed cartwheel after cartwheel to free himself.

Both men backed into their respective corners, slowing things down, not willing to make that first mistake. Okada stopped Sanada’s flying forearm from the apron with a punch to the face. Sanada diffused Okada’s attempt at a DDT on the apron backing him with authority into the steel post.

Sanada dove off the apron with Okada bulldogging him into the security railing. Grabbing Okada, Sanada led him up the entranceway and piledrove him into the rampway. Okada barely beat the count as he staggered back to the ring.

A standing moonsault in the middle of the ring gets Sanada a two count. Okada ducks the second one but eats a drop kick to the face for another two count. A second piledriver almost gives Sanada the win. Okada kicks out only to be snaked into another headlock.

Okada plants Sanada with a suplex and knocks him down repeatedly with running elbows. Okada drop kicks Sanada off the apron and into the barricade. Okada slingshots Sanada into the opposite barricade following up with a running boot to the face that drives Sanada up and over the fencing. Draping Sanada over another barricade, he drove him to the arena floor with a DDT.

The finish of the match came with Okada surviving Sanada’s Skull End and a moonsault from the top rope. A second moonsault is stopped abruptly by Okada’s knees. After reversal after reversal, Okada pinned Sanada with two Rainmaker Clotheslines and a Tombstone Piledriver.

Speaking after his victory Okada not only wants to break tradition and participate in the New Japan Cup but face the IWGP Jr. Heavyweight Champion (currently Will Ospreay and a fellow member of the Chaos faction) at the Anniversary pay-per-view on March 6th.

The main event topped off a mostly predictable card with all of the NJPW champions retaining. Overall though, Chaos did quite well against of Los Ingobernables de Japon at the event winning three out of the five matches that pitted the two factions against each other.

The New Beginning in Osaka 2018 Results

This is the sixth match of Kitamura’s seven match trial series. Nagata’s Nagata runs over Kitamura like a freight train. Nagata deftly escapes a Kitamura torture rack. In a harsh back and forth, Nagata and Kitamura exchange slaps, chops and more slaps. Nagata dares Kitamura to hit him harder and harder. Nagata wins with a high-angle suplex.

Sho and Yo vs. El Desperado and Yoshinobu Kanemaru

Don Callis about Rocky Romero: “You say he is a “hit machine”? You should put an ‘s’ in front of that.” Sho’s back is heavily taped up. Susuki-gun takes things to the floor, hurling Sho and Yo into the barricades. Susuki-gun focuses their attack on Sho’s back and that takes the crowd totally out of the match until Yo hot-tags in. As Kanemaru locks in a Boston Crab on Sho, Desperado hits Yo with a steel cage on the floor. Desperado brings the chair into the ring bashing Sho across his back. Sho taps out to the Boston Crab. As Kanemaru holds a chair across Sho’s back, Desperado labels him again with a steel chair. Romero dives into the ring to shield Sho. Suzuki-gun beat on Romero. As Kanemaru empties his whiskey bottle on Sho, Desperado holds up the IWGP Junior Heavyweight Tag Team Championship belts then drop them to the mat.

A set-up to push a Makabe and Suzuki feud. Ryusuke Taguchi, Kushida, Togi Makabe and Michael Elgin beat Suzuki-gun to the punch and attack them first. Makabe seems to enjoy slugging it out with Minoru Suzuki. Taichi wraps an electrical cord around Taguchi’s throat and drags him around the floor then clocks him in the head with the bell hammer. Iizuka then starts chewing on his skull and his butt after a failed Funky Weapon. Callis calls Elgin “The Beast of Lake Ontario”. Elgin bites-Iizuka’s skull. Makabe and Suzuki once again go toe-toe. They trade stiff forearms for like six days until Makabe tells Suzuki to do something that is physically impossible. Makabe pins Michinoku with the King Kong Knee Drop then taunts Suzuki with the IWGP Intercontinental Championship belt. Suzuki climbs back into the ring, retrieves it and the two angry bulls have to be separated.

Yano immediately pulls off the turnbuckle pad. Juice Robinson airplane spins him, turnbuckle and all. Both men are so dizzy they cannot find their corner. Henare and Ishii throw some solid hands. The official stops the match when Switchblade gives Henare the Bladerunner and then hits him with elbow after elbow. Switchblade does the same thing to the referee. David Finlay spits on White.

Bushi comes to the ring with…huge hedge clippers in his hands?!?!? Gedo comes out carrying two masks he already took from Bushi. Bushi and Gedo battle on down the aisle. Gedo throws Bushi into the security railing. Gedo gets DDTed into the ring apron. In front of the announcers, Bushi starts ripping out Gedo’s beard. Gedo begins tearing off Bushi’s mask but the official stops him. Gedo ties Bushi’s mask to the turnbuckle. A Young Lion cuts Bushi free with the Hedge Clippers. Bushi pins Gedo with the MX. Bushi tries to chase down Gedo with the hedge clippers but is stopped by officials and Young Lions. Bushi gets his stolen masks back.

Yoshi-Hashi jumpstarts the match attacking Naito from behind as he is making his entrance. Yoshi-Hashi mocks Naito with his signature taunt by lying down and relaxing in the middle of the ring. Natio rolls out of the ring, baits Yoshi-Hashi to the floor where he is bounced off the ringside barriers at light speed. Naito gives him a neckbreaker on the ring apron and inside the ring for a two count. Naito spits on Yoshi-Hashi. Naito ends things with an Avalanche Hurricanrana, a Dragon Suplex and two Destinos.

Both men hit their signature poses after faking dives outside the ring. Ospreay runs at Takahashi and Takahashi throws him over his head and into the steel guardrail with an overhead suplex. Takahashi throws him into the guardrail again and again. In an incredible match, Takahashi is spun out of his boots with a Spanish Fly, draped over the ropes, given a shooting star press and a Beheading and finally an OsCutter for the win.

An angry, ugly encounter with Goto and Evil just thrashing on each other as only New Japan Wrestlers can. Evil gets nasty when he chokes Goto with his own ceremonial necklace. Bleeding from the mouth, Goto puts Evil away in 20 minutes with the GTR.