I’ve met Ric Flair twice in my life. The first time was outside Maple Leaf Gardens before a house show during his first run with the WWE. The second was at a Fan Axxess autograph session held in Toronto before WrestleMania X8. As someone who genuinely believes that Flair is the greatest wrestler in the history of the sport, I can say that those two moments were among the top wrestling-related moments of my life. Disappointing, then, that moments so significant to me didn’t even warrant a mention in Flair’s new autobiography, Ric Flair: To Be The Man. 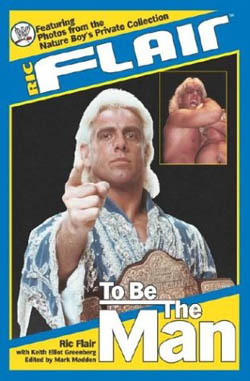 I’m kidding, of course. There is absolutely nothing disappointing with the book, co-authored by Keith Elliot Greenberg (who also penned last year’s book on Fred Blassie). Rather, To Be The Man ranks right up there with Mick Foley’s first offering as one of the greatest wrestling books of all time. Flair lays out his entire life on the book’s pages, fully recounting his life from a rambunctious youth in Minnesota, through thousands of matches in hundreds of cities around the world, through backstage political waters, to the top of “Space Mountain,” to the depths of despair, and everywhere in between. Like a classic Flair match, the book takes readers on an emotional roller-coaster ride, pushing aside the backstage curtain and showing us the world through the eyes of the Nature Boy.

From an early age, Flair’s passion for wrestling was unyielding. It only grew stronger when he met Verne Gagne through former Olympian and WWE strongman Ken Patera. Gagne agreed to train Flair and bring him into the AWA — and the wrestling world was never the same again. In the book, Flair candidly recounts a number of stories from his days on the road with other legends like Dusty Rhodes, Dick Murdoch and Wahoo McDaniel, the man who would eventually lead him to Mid-Atlantic Championship Wrestling, one of the territories that made up the NWA. The stories will be real eye-openers to newer fans, in that they take place in a long-forgotten era where the business was still highly protective of its “secret” that the heroes and villains weren’t really fighting it out and didn’t know who was going to win the matches. Though a laughable concept today, Flair describes to what lengths they would go to protect the business back in those days — even to the point where Tim “Mr. Wrestling” Woods, who was in the plane crash that almost ended Flair’s career back in 1975, checked himself out of the hospital early to appear on TV to hide the fact that he, a hero, was on the same plane as the bad guy Flair!

And what a bad guy he was, picking up the title of “Dirtiest Player in the Game” as well as several championship belts during his storied career. Flair documents all of his greatest matches and rivalries. His love for the sport is clearly evident when talking about his wrestling brethren, heaping praise on those whom he admires — men like McDaniel, Ricky Steamboat, Arn Anderson, Roddy Piper, Harley Race, and Sting — and unabashedly criticizing those he felt weren’t quite up to the job. His utter disrespect for men like Sid (Vicious/Justice) and Brutus Beefcake who, Flair says, never earned their success through work rate or talent, pours off the page with no ambiguity at all.

For example, he labels Sid as a “useless muscle-head … (who) exemplifies the worst of this business. He got rich despite never learning his craft or drawing a dime.” Of Scott Steiner, Flair writes “people will forget him the minute he retires.”Naturally, the book delves into the most enduring feud of wrestling’s history — WCW vs. the WWE. As the top dog in WCW, Flair was always a pivotal player in the battle between the companies throughout the ’80s and ’90s. Flair details all of the highs and lows he experienced during these turbulent times. He describes how wrestling consumed him during this period, and how he gave up his body, heart, and soul for the business … for WCW. He describes how he lived the Four Horseman lifestyle, sacrificing his marriage and health in the process. He writes about his battles with Rhodes in the ring to his fights with WCW executive Jim Herd on the booking committee — creating such a negative environment that Flair ultimately left to join the WWE for the first time.

Flair’s forthright statements about some of the WWE stars are bound to raise some eyebrows. Extracts of his comments about Foley — that the popular star is nothing more than a glorified stuntman that was never a great in-ring worker — were published recently in one of the WWE magazines. Others have been less-publicized, but are no less controversial. His reflections on Bret Hart, for example, are bound to have some Canadian fans up in arms.

“Personally,” he says, “I never saw dollar signs on Bret Hart.” According to Flair, Hart was too protective of his own image. “(Bret) could have been the President of his own fan club,” Flair writes. Elsewhere, Flair criticizes Hart for what happened at Survivor Series 1997, backing Vince McMahon’s statement that “Bret screwed Bret,” by trying to put himself over the business, something that Flair prides himself on never having done, no matter how bad the business may have gotten.

Like during the Eric Bischoff years. If there is one person in the entire wrestling world that Flair despises, it is the former head of WCW. Flair is unmerciful in the way he portrays Bischoff as a power-hungry sadist who tried to make Flair’s life miserable while cow-towing to the whims of Hulk Hogan and other wrestlers who didn’t deserve the positions they were in. The betrayal that he felt from the company that he gave so much to for so many years is palpable — his pain drips from the pages.”I had a thousand reasons for never punching out Eric Bischoff in WCW,” writes Flair. “He was an executive. I had dragged my family through one lawsuit, and didn’t want to get caught up in another — particularly one I would lose. But, when I was alone, I’d think, ‘Why didn’t you just beat the shit out of him?’ And I blamed myself for never doing it.”

Flair finally got his chance when both men were eventually hired by WWE. Flair writes about the infamous incident in March 2003 where he finally confronted Bischoff and tried to provoke him into a fight backstage. That story is just one of the poignant moments of raw emotion in a book chock full of them.

The last few chapters concentrate on the more positive emotional aspects of Flair’s recent life. His focus on his family, for example, to whom he is committed to dedicating more attention, so as to make up for time lost during his younger years. And his renewed passion for performing in the ring, a passion which was dampened in the dying days of WCW. Flair credits the entire WWE roster, particularly his Evolution partner and friend Triple H and the McMahon family, for re-energizing him and giving him back the confidence he had lost earlier. The book finishes with Flair’s memories of the special post-Raw celebration held in his honour in May 2003 by the entire show’s roster. It was, to Flair, one of the greatest nights of his career — in fact, in his life.

To Be The Man is a fascinating chronicle of the life of a wrestling legend. For wrestling fans in general, it is a worthwhile read, simply for its first-person perspective of someone who lived through the best and worst of the modern history of the industry. For Flair fans, however, this book is an essential read, as it is a brilliant story of what it’s like for their hero “To Be The Man.”