OTTAWA – The only honor that outshines being a member of Team Canada, in whatever sporting incarnation, is that of being the designated ‘Captain’, who must lead the charge for The Great White North.

For Windsor, Ontario native Petey Williams, only now approaching his third year as a professional wrestler, the prestige of holding such a title is somewhat overwhelming.

“It feels really good when they pick you to represent Team Canada and 30-million-plus people,” is how Williams described his new found prestige with Nashville-based Total Nonstop Action (www.nwatna.com). 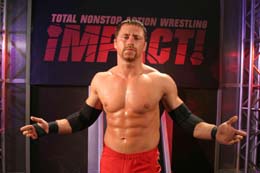 In a recent interview with SLAM! Wrestling, the 5-foot-7, 180-pound Petey Williams (his real name) spoke about the awe-inspiring sensation of appearing on the promotion’s weekly pay per view and television show on FOX SportsNet.

“It’s more than you can imagine. It’s almost like this can’t be happening. I never thought in my wildest dreams, since I started wrestling, that I would make it on TV,” said Williams. “I always thought I would be stuck on the indies, then I got this opportunity.”

A wrestling fan since he was six, one can understand Williams’ state of wonderment as he recalled his first ever Wednesday night PPV appearance.

“My first match ever on TNA was against Juventud Guerrera,” he said. “Before I was even in the business, I was watching him on WCW doing his thing and now I get to work with him in the ring. It was great!”

In fact, the match would turn out to be a three way, along with Jerry Lynn.

But what made his debut even more memorable was the simple fact that Williams was a last-minute replacement for an injured Teddy Hart.

“Teddy Hart hurt his knee and I filled in for him with ten minutes to spare,” explained Williams, who would go on to win his debut bout via pinfall over Guerrera.

In doing so, not only did Williams prove himself worthy of a spot on the TNA X Division roster, but inherited the position of Captain for Team Canada.

Reflecting on what he has achieved in a relatively short period of time, Williams credited his training under fellow Windsor native — and current Team Canada manager — Coach Scott D’Amore.

“I can say 100% that if there was no Scott D’Amore, there would be no Petey Williams on PPV right now,” Williams proclaimed. “Scott was the one who trained me and he’s always been a fan of my work.”

Prior to his arrival in TNA, Williams was striving to make a name for himself with various independent promotions in the United States. That drive caught the attention of D’Amore.

“Scott saw that I was making the big effort and he said it’s time that you got what you deserved. He got my foot in the door and I thank Scott everyday.”

During his time with TNA, Williams has bared witness to two incarnations of Team Canada. The first version consisted of Williams and Calgary-based workers Johnny Devine, Jack Evans (who is in fact from the United States) and Teddy Hart.

“They restructured the team because of complications with bookings. It was myself and Johnny Devine again, with the new additions being Bobby Roode and “Showtime” Eric Young,” he explained. “Teddy Hart was the captain and when he stepped down I was able to fill the captain role.”

As Williams and his fellow members of Team Canada have discovered, they are far from being embraced by the TNA fans as typical, happy-go-luck lads from north of the border.

“Everybody hates Canada. When you’re in the U.S., they hate Canada just because it’s been portrayed like that on TV,” remarked Williams, adding that D’Amore has played a major role in drawing the ire of wrestling fan.

“Scott D’Amore has a lot of heat on us. People just hate him. When we meet American fans after the shows, they say ‘You guys need to get rid of Scott D’Amore! You would be so much better.’ But what they mean is, if we didn’t have Scott, people would start popping for us and we would be babyfaces. So it’s good that we have Scott with us.”

Ultimately, it is Williams who has strived to elevate himself to being a must-see X Division talent, by executing a crisp, airborne ring style. Backing this up with his patented Canadian Destroyer finisher (best described as a reverse sunset pile driver), and there is no mistaking Williams’ longevity.

Among fans who have followed his exploits, few would dispute that Williams brought his wrestling abilities to a new level with his participation in the Ultimate X match in May. Facing off against fellow Border City Wrestling graduate Chris Sabin and Mexican wrestling great Hector Garza, Williams proved his ability to handle the main event pressure.

Speaking of Sabin, Williams mentioned the unique cohesion he shares, nurtured from their days as rookies learning the trade under D’Amore.

“Just reading the internet reports, they think Chris Sabin and I click very good in the ring,” Williams said. “We were always able to do that on the indy market and we know each other’s moves. Chris Sabin is a phenomenal athlete, he can click with anyone. When we’re putting together matches, we don’t have to talk about it much because we know each other so well. It’s always great working with Chris.”

Williams also credited the TNA organization for establishing a productive environment where workers can strive to excel in the ring. “Of all the companies that are trying to build themselves, they (TNA) are the top company. The locker room is great, the morale is good, everybody is friendly and the guys are always great to work with.”

For the time being, Williams still resides in Windsor, making the weekly trek to Nashville and Orlando for the PPV and televised tapings. Although working towards acquiring a work visa that will allow him to remain in the United States on a more permanent basis, he is content, for now, to keeping himself rooted in his native land.