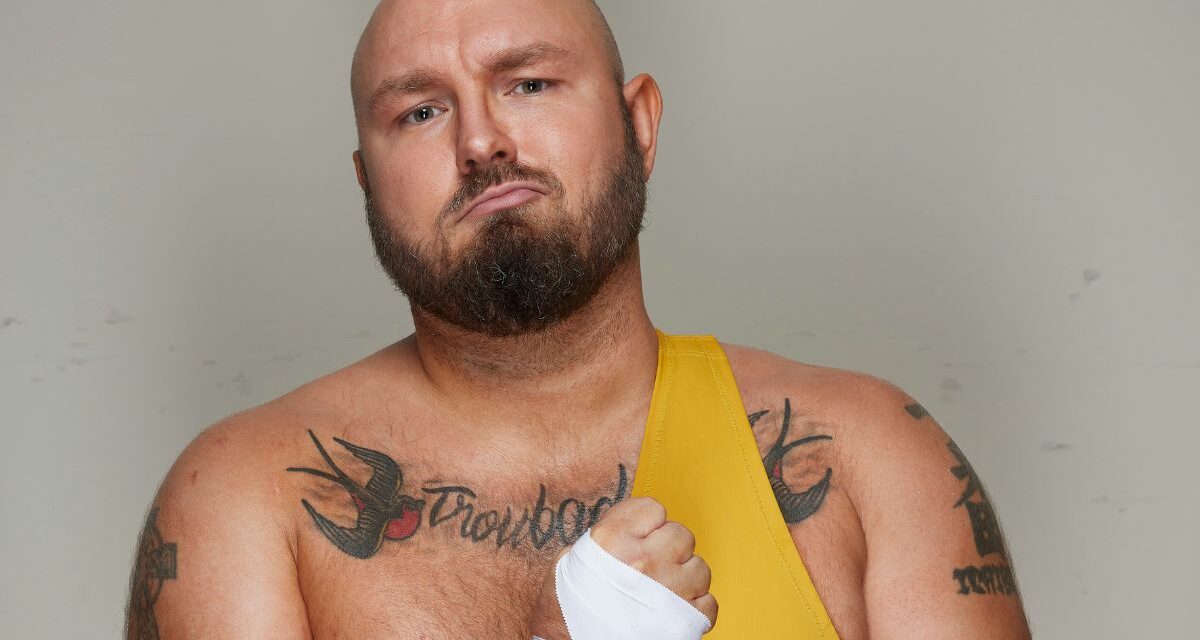 There are wrestlers that are babyfaces or heels. Sometimes they are Ill-Begotten. But none are quite like Jeremiah Plunkett, the Tater Peeler of Tennessee. When SlamWrestling.net caught up with the 5-foot-10, 265-pound wrestler he gave us this story about the origin of “Tater Peeler.”

“[It’s] a ghost town. It’s been absorbed by the city of Lebanon and probably has for over a hundred years,” Plunkett said. “But this was… well before I was born, and honestly what it came from is Showtime All Star Wrestling was running; it was a Reno Riggins project. But Jerry Jarrett was involved and Jerry had some syndication or whatever. So, we were doing this angle: Paul Adams, the booker, had put a redneck gimmick on me, and while I was wrestling … I always wanted to do my actual hometown, Murfreesboro, Tennessee.”

But it was the announcer for the show that gave him the hometown of Tater Peeler, Tennessee. “I hated it. I hated it with a passion. I thought it was stupid, but then the following week that’s all anybody talked about, and it just sort of stuck ever since.” 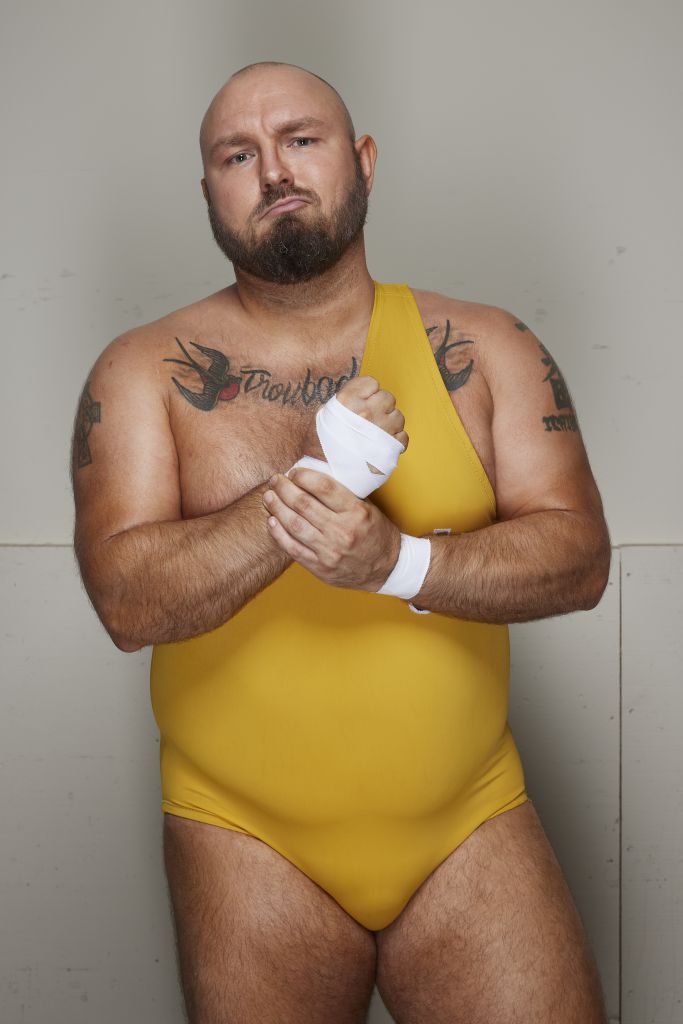 Jeremiah Plunkett in June 2022. Photo by Daniel Moore for the NWA

Plunkett has been wrestling for over 17 years, but his upbringing was like a lot of stars that came up in the sport. “I played football a lot growing up. I was offensive lineman and once high school ended [I] didn’t get very many offers. Had a couple of private school offers, but those are only partial,” he explained. “So, even after the scholarships, the family would have been paying like ten grand a year, and it wasn’t worth that for a lower middle-class family just so I could go play football. So I knew football was out of the picture for the considerable future, and I always wanted to do wrestling.”

“I had no idea how to go about getting trained,” Plunkett continued. “I just showed up at the independent shows and was literally asking guys on their entrance to the ring if they trained guys.”

So where did Plunkett get trained? “I got trained by some guys who worked for the local NWA affiliate at the time, NWA Main Event. ‘Mean’ Mike Woods, Buzz Dupp, and ‘The Outlaw’ Lee Condry were my initial trainers.”

From there, Plunkett wrestled for American Championship Wrestling in Smyrna, TN, and that was due to advice from his trainer Dupp. “On his way out, like when he’s leaving Tennessee, he told me, ‘You got to get out of one place, you’re never going to do anything in one place.’ So I started wrestling as much as possible, anywhere I could.”

Plunkett would wrestle five nights a week at times in Tennessee, and even rode with Tracy Smothers and Chris Michaels learning his craft. It is only in recent years the wrestling journeyman came to be noticed on the NWA Powerrr shows. “Crimson [Anthony Mayweather] was running Tried-N-True Pro Wrestling… so they were using his crew, his ring,” Plunkett explained. “Me and Mayweather have been buddies for years… and his friend and I were bumping for years. So it was a friendship that’s been there for a while.” His friend asked if he could come down and help out, and Plunkett agreed.

“I was working at a backstage capacity for one of their pay-per-views, and then COVID shut them down,” Plunkett said. “I had just come back after neck injuries and I had three matches and then COVID happened, and I was starting to get to the point where I don’t know if wrestling is going to come back; or if it is, what it’s gonna be like. I’m literally going to hang it up. That’s what was on my mind, and I was just married and I was just starting to try to get into shape for health [reasons], because I was at one point 320 pounds.”

He and Kenney knew each other from when Plunkett did the Gut Check segments for TNA/IMPACT Wrestling as well as Ohio Valley Wrestling (OVW). Kenney, who wrestled as Simon Diamond, was involved behind the scenes in NWA. “I guess Pat put the bug into Al [Snow’s] ear and then I guess… I don’t know how I was on his mind. I hadn’t talked to him in years. I think between Mayweather and Thom Latimer… I think between those two they said, ‘Hey, give this guy a shot.’”

Plunkett has been a mainstay for NWA Powerrr since the show started coming back around 2021, and recently he has been part of a new alliance with Rush Freeman, Alex Taylor, and Danny Dealz called The Ill-Begotten. “Originally the team consisted of Captain YUMA and Rush Freeman,” Plunkett explained. “Its original concept was the Island of Misfit Toys. [I] think it may legitimately have been, ‘Hey, here’s a group of guys that we don’t quite know what to do with, but we want to do something with. So, let’s see if they’ll make something.”

Then Alex Taylor was added into the fold, as well as Plunkett, and Danny Dealz became the manager of the group. There have been some recent changes to the lineup, but there’s been some history between the men mentioned. “I actually trained Rush Freeman originally through the Tried-N-True Academy by Anthony Mayweather. I handled the beginners,” he remembered. “So Rush came through us, [and] I’ve known him since he started.”

Alex Taylor, a graduate of Seth Rollins’ school, was introduced to Plunkett in the most unique way. “I met him on a fair show … and he dropped kicked me in the mouth so hard I literally looked at him and said, ‘This is a fair show! What are you doing?!’” Plunkett laughed at the memory.

As for the formation of the group, Plunkett surmised, “I think they saw that we live with each other. They didn’t know that we had worked with each other, but we hang out after the shows and stuff like that. And they’re like, ‘Oh okay.  Maybe we’ll throw these guys together. Maybe it’ll work.’”

With the double pay-per-view of NWA 74 coming up on August 27 and 28 in St. Louis, Plunkett and Taylor have their work cut out for them, as they will be in a 10-man battle royal for the newly resurrected NWA USA Tag Team titles. “We were already on the phone with each other.  We’ve already got Danny Dealz running for GM of NWA USA, trying to oust Madusa,” said Plunkett. “So if we can get these championships, we get Danny Dealz in power; it could be a perfect storm.” 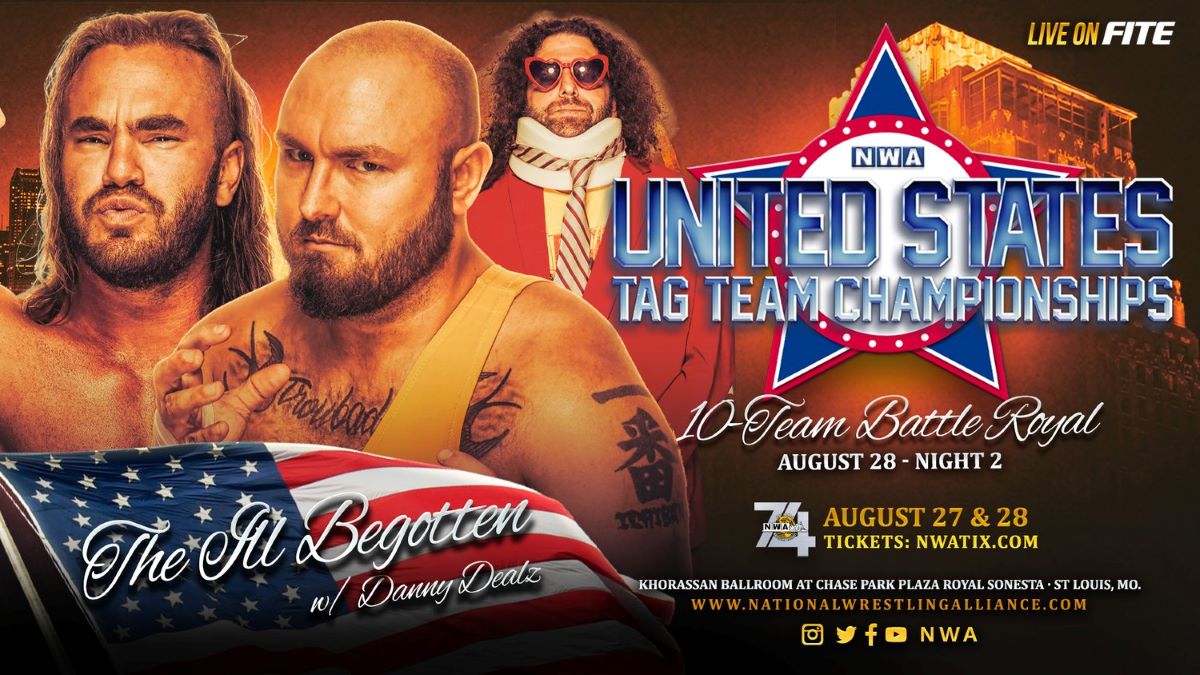 Plunkett is decidedly a fan of tag team wrestling. “It’s hard to have a reliable tag team partner, but I’ve got one now with Alex [Taylor].”

As for the future, Plunkett is positive. “I just want to keep going as long as I can go and keep performing at a high level as long as I can perform. As far as for The Ill-Begotten, we want the US Tag Team Championship,” he said. “We’ve had personal conversations about how like, if we could do this, we could do something good with it. We know we can. We’ve got notebooks of ideas, so that would be a great opportunity and we would love to roll with that.”