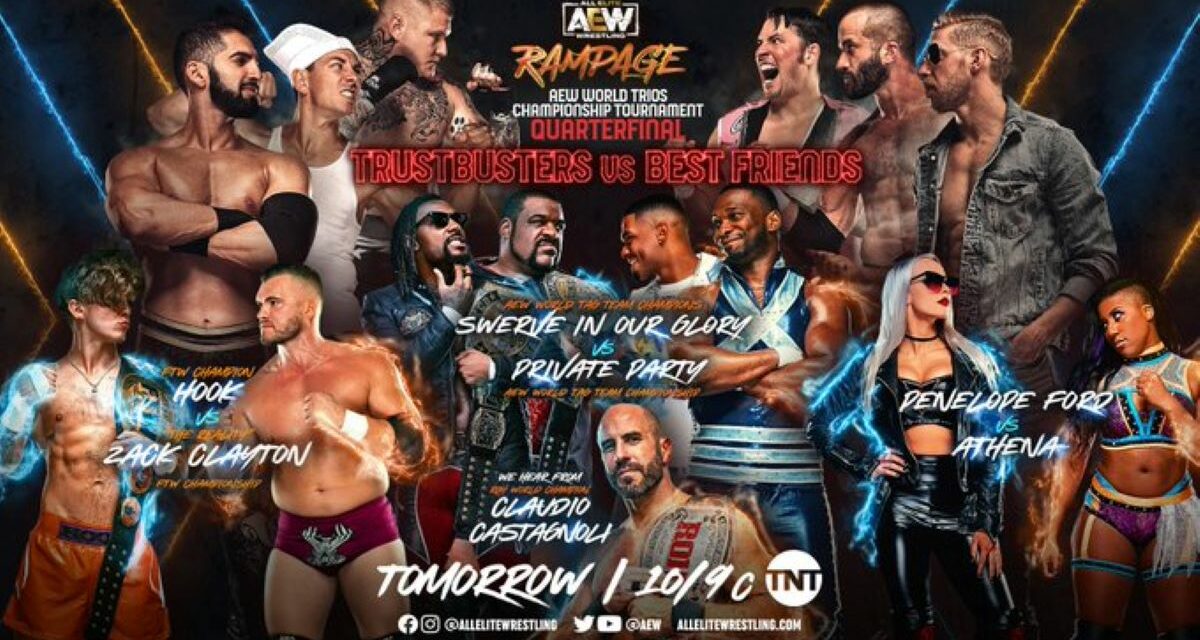 It’s Friday night and you know what that means? No, not to stab your friends in the back (allegedly) or update your resumes (again) if you’re going to be future endeavored. It’s AEW Rampage, and not only is there championship action with Swerve in our Glory in da house (as the kids say), but we also got the next round of the AEW Trios tournament with The Trustbusters and Best Friends squaring up in the main event.

So let’s send it to the Charleston Coliseum, in Charleston, WV, where Excalibur, Tony Schiavone, Chris Jericho, and Jim Ross have the call.  But we start with The ROH World Champion Claudio Castagnoli and the ROH Pure champion Wheeler Yuta coming out to the ring. Castagnoli says hi to Ricky Steamboat who’s at ringside, and he gets on the mic to let us know that it’s great to be in front of the fans. He’d rather be in his ring gear so he can defend the ROH World title. He offers an open challenge to anyone next week, and Dustin Rhodes answers the call. Simply put, game recognizes game in wanting those title opportunities but always coming up short.  Rhodes declares if he accepts the challenge, Castagnoli will get The Natural Dustin Rhodes like he’s never seen. A gentleman’s bargain is made, and we have a match next week in Cleveland.

Lexi Nair is backstage with Ruby Soho and Ortiz and they want Sammy Guevara and Tay Conti in the worst way possible.  Probably because it’d be easier than for Soho to get her hands on Liv Morgan.

When you realize it's Friday night and #AEWRampage is on pic.twitter.com/24vkYfMIrT 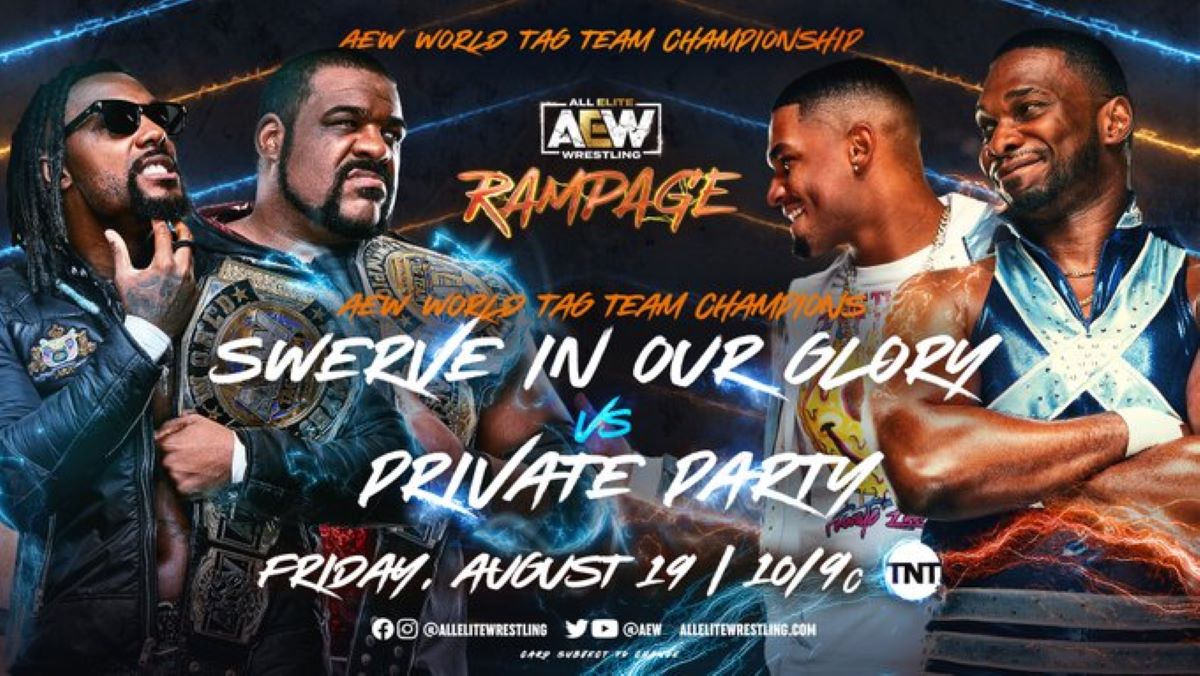 Lee starts off on Kassidy,ensureshe Limitless one ensure he basks in his glory.  But once the tag is made to Strickland, things turn in Private Party’s favor and when Strickland tries a powerbomb it gets spotty with a reversal, but Kassidy sends him out of the ring and he follows up with a corkscrew bodypress on the outside.  During Picture in Picture, Strickland is in trouble as they keep him isolated in the corner. They set him up top turnbuckle but manages to shove off Quen to double stomp him and rolls to Lee for the hot tag, and He Is Limitlessly en Fuego.  A huge clothesline by Lee turns Kassidy inside out, and he covers, but the Private Party member kicks out at two.  Quen attacks and Lee nails a Pounce that would make a defensive linebacker wince to cover for another two count.  Now Lee tags Swerve back in, and he gets a “Who’s House” kick for a two count on Quen, much to his disbelief. Lee calls an audible to his tag partner and Strickland delivers what’s called a JML driver and there’s no getting up after that pin.

Your Winner via Pinfall, and Still AEW World Tag Team Champions:  Swerve in our Glory

After the match, Lee gives a fist bump to Private Party, but not Swerve….hmmm.  What could it mean?

Lexi Nair talks to The Factory backstage playing dominos, and Powerhouse Hobbs topples the table and demands they put an end to Ricky Starks.  QT  Marshall says it’s under control, and Hobbs walks off.

And now we get another title match, and it’s for the…

Yes, folks.  Clayton proclaims on his way to the ring to bring the title back to someplace better than West Virginia.  He promises to give it a good home in New Jersey (the Bizarro Utah of the East Coast.  Take a moment on that one…)

Before I could determine if I needed a squash recipe or a haiku to recap this match, this happened:

Well we would say good try @zackclayton but……. #AEWRampage pic.twitter.com/u0a0MXRtkI

One RedRum, and it’s all over in eight seconds.

(Note to Self:  Next time, take bets on how long Hook defeats an opponent.  Could be a good side hustle)

Speaking of folks who want a swing at Hook, Angelo Park and Matt Menard say he’s no tough guy. What if the title was held by a sports entertainer, they ponder?  What If…?

What if the #FTW Championship was held by a… Sports Entertainer? Does FTW Champ HOOK want a taste?

Tune in NOW to #AEWRampage on TNT! pic.twitter.com/CUL70kuFmG

Lexi Nair is with  Billy about when his rotten kids turned on him. Billy tells The Gunn Club by channeling his inner Wyatt Earp that “You called down the thunder” and now he’ll spank their ass with help from his new friends…The Acclaimed.

After a shocking betrayal by his own sons last week, Billy Gunn is bringing some friends to challenge Austin & Colten Gunn this WEDNESDAY on #AEWDynamite LIVE on TBS!

Tune in NOW to #AEWRampage on TNT! pic.twitter.com/pNAd6pP7TV

And now for a match that wandered off AEW DARK, it’s…

Yeah, this time we’re getting a Haiku Match in Review™:

Now laid out to waste.

Your Winner via Pinfall:  Buddy Matthews

All of a sudden, Miro comes out with Malakai Black’s mask and then attacks Matthews. The Redeemer trounces Matthews and demands “the pagans!”  Don’t you hate it when religion gets involved?

Lexy Nair is now standing by with Dr. Britt Baker, D.M.D., Jamie Hayter, and Rebel.  Baker states they are blowing this popsicle stand since they’re no one for them to wrestle.  Nair mentions they weren’t scheduled to wrestle anybody, and Rebel shoos her off to conduct the interview. Baker calls out ThunderStorm and proceeds to rank them out as filthy, dirty, disgusting, stinking, bottom-feeding, trash bag…

What?  Oh, my bad.  I was watching an old Chris Jericho promo (it’s easy to get that confused).  Anyway, the point is they’re still coming for them, and Baker won’t rest until she gets her AEW Women’s title back. 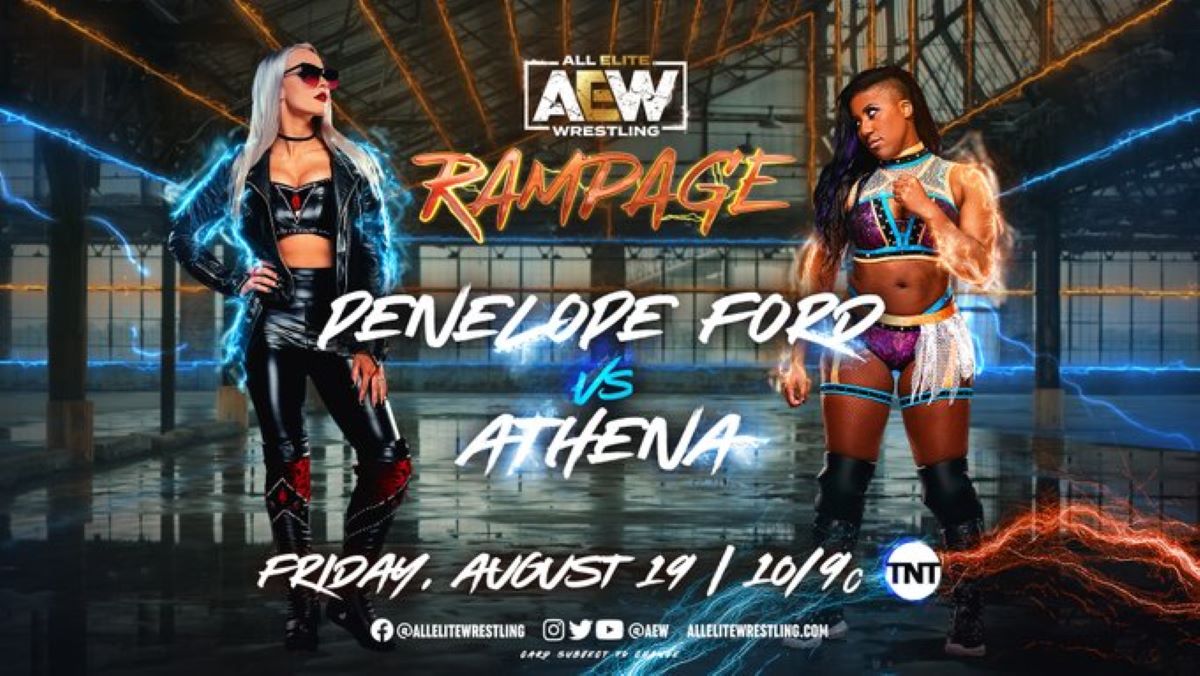 Athena comes out with a metal wing costume that she lays out at the top of the ramp.  Ford is coming back to action after a long absence, and other than Excalibur noting her hair color is very House Targareyon (nice House of Dragon reference, because yay corporate shilling!), Ford is really taking it to Athena and there are no signs of ring rust.  During Picture in Picture, Ford takes her time working g over Athena and gets a big boot in the corner for a two count.  Athena starts to fight back and …

Ads (I don’t what’s more irritating:  the fact I complain about cutting to ads in the middle of a match when Picture in Picture is designed the avoid NOT CUTTING AWAY FROM THE ACTION IN THE MIDDLE OF THE MATCH, or that these annoyances continue despite my protestations.)

We come back and Athena is outside the ring and she lands a running dropkick to guardrails in front of a fan in a cheap polyester suit wearing a box on his head that says, “Under rated?  Over It!”  Ross says it’s Ford’s husband Kip Sabian, so…okay, then.  Athena closes out the match with the corkscrew diving stunner and gets the win

Your Winner via Pinfall:  Athena

As Athena celebrated in the ring, Kiera Hogan and Leila Grey attacked her, and held her in the center of the ring, as Stokely Hathaway and Jade Cargill, wielding a sledgehammer, breaks her ring entrance costume(jerk). Athena tries to fight off the Baddie stooges and she gets the worst of it as Cargill connects to send a message that she will never take her belt.

There’s a Jon Moxley and CM Punk video package, and they aren’t waiting for All Out to fight for who is the true AEW World Champion:

The Undisputed World Championship to be decided this Wednesday on #AEWDynamite pic.twitter.com/pZxoclbsdX

Mark Henry is with The Trustbusters and Best Friends for final words. Daivari says it’ll be a walk in the park and then they are one step closer to being the first AEW Trios champions. Beretta and Taylor says the belts are made for them, and they’ll be the ones to advance. 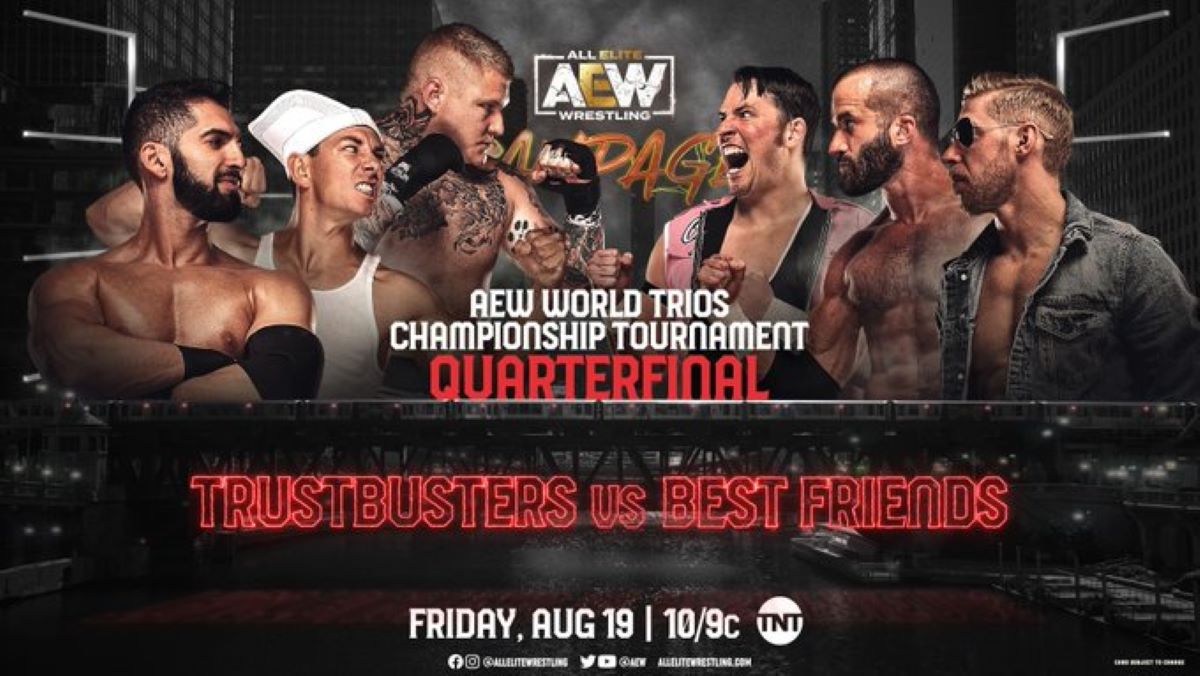 As the bell rings, Taylor and Daivari start, and he tries to take a shortcut to the Best Friend but Taylor recovers quickly.  Now Slim J gets tagged in, and he’s attacking, according to Jericho, “like a ferret!”  Ha!

This is a Pier six brawl and during Picture in Picture, Bordeaux is laying waste to Beretta and anyone else he can get in contact with in and out of the ring.  They keep Beretta isolated in the Trustbuster corner and he is a Best Friend in Peril.  Daivari keeps Beretta grounded, but he manages to fight his way to the corner, but Slim J knocks off Taylor from the ring apron.   but not Cassidy.  As Slim eyeballs Cassidy, Beretta comes from behind and lands a half nelson suplex.  He finally gets the hot tag Cassidy and he’s an (oh, let’s be generous and say) Orange en Flambé with “kicks.”  Daivari gets in and Cassidy nails his signature reverse DDT.  He tries to knock out Bordreaux and he is just an unstoppable monster.  But they get Bordreaux in the corner, and Best Friends execute a triple dropkick in the corner, but Slim J disrupts the celebration with a standing Sliced Bread #2, and a frog splash by Daivari follows up for a pin cover to Cassidy, but the Best Friends break up the count.

The match goes outside the ring, and  Cassidy lands an Orange Punch to Bordreaux.  Now Cassidy goes up top to attack in the ring, and Kiss makes him lose his balance, and that’s enough for Slim J to come back with a diving reverse DDT for another two count.  While things are getting settled in the ring, Kiss encounters Danhausen in the crowd and he curses Slim J.  That curse enables Taylor and Beretta to nail the double chokeslam, and that leads to an Orange punch.  The finish has Cassidy on The Best Friends’ shoulders, and he leaps off to a splash for a pin for the one, two, and three. Thumbs up, because…

Your Winners and Advancing in the AEW Trios Tournament:  Best Friends

The Best Friends and Danhausen celebrate the victory in the ring, and…yeah things got Very Nice and Very Evil in the win as the show goes to credits.

The highlights were Castagnoli and Rhodes making the ROH World title match official and the car crash that was the Trustbusters/Best Friends trios match.  Everything in the middle was one step above “meh.”  I will say kudos to Cargill and Athena for adding another layer to their feud, and Miro sending a message to The House of Black looks promising.

Zack Clayton, though?  The only critique is that the match should’ve ended in FIVE seconds!