NWA USA: Allysin Kay and Marti Belle look to put a Hex in the main event 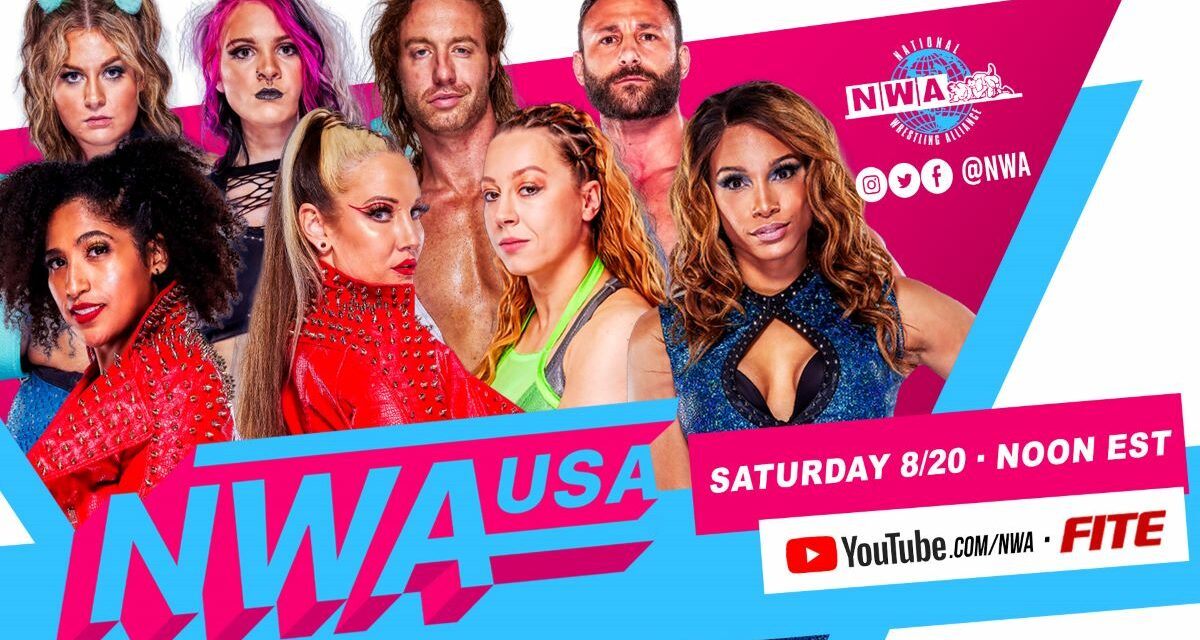 On the final episode of this season of NWA USA, Allysin Kay and Marti Belle, have a single focus:  to reclaim the NWA Women’s Tag Team belts.  They’ll get a chance at NWA 74 against Pretty Empowered, which we’ll hear about later in the show.  For now, The Hex is ready to cast a spell of pain on Missa Kate and Kaci Lennox in the main event.

So we head to the Skyway Studios in Nashville, TN one more time. Joe Galli, Tim Storm, and Velvet Sky have the call and your First Match of the night is… 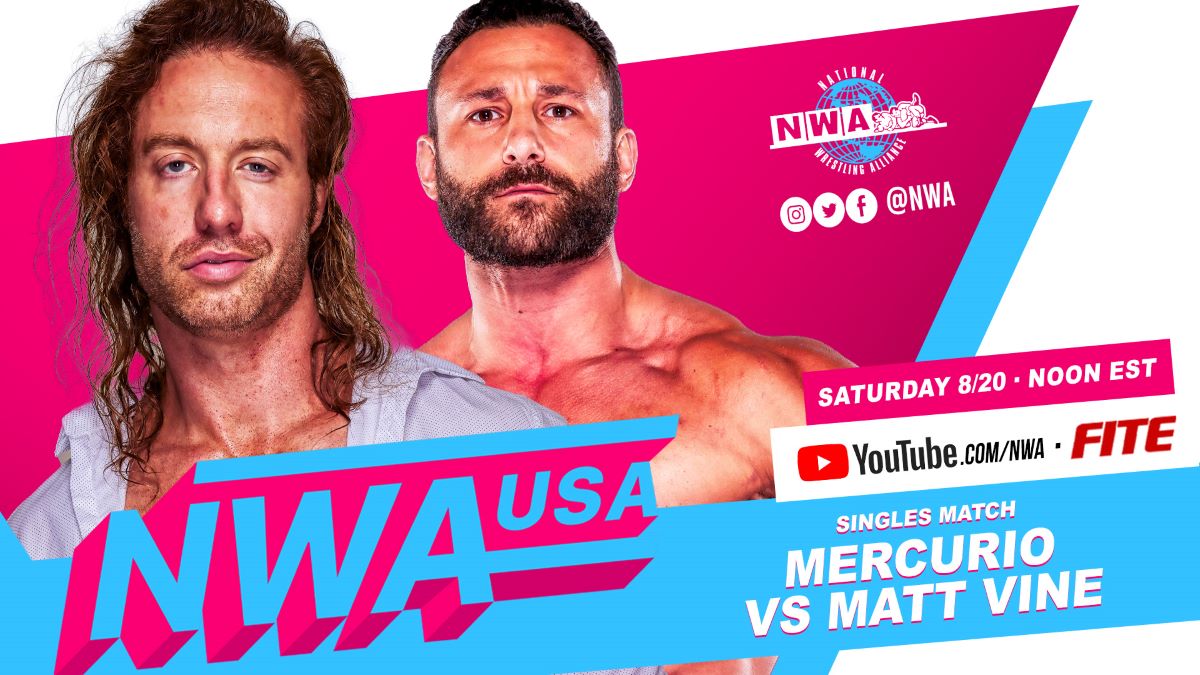 There’s a little jaw-jacking by Mercurio and a slap to the face because apparently he really hates his face.  Vine grabs his hands and slams him hard to the mat.  He manages to overpower the Italian, but a stun gun on the ropes and Mercurio works over Vine with a scoop slam and a knee to his ugly face to cover for a two count.  Mercurio gets a leaping knee strike in the corner to Vine’s face and adds a little accent to his forearm to cover for another two count.  Vine fights back and gets an impressive powerslam to cover Mercurio for a two count.  Vine winds up for a superkick, but Mercurio shoves him to the corner, and that perfectly sets up the Last Romance to end this match and get rid of Vine’s ugly face.

Your Winner via Pinfall:  Mercurio 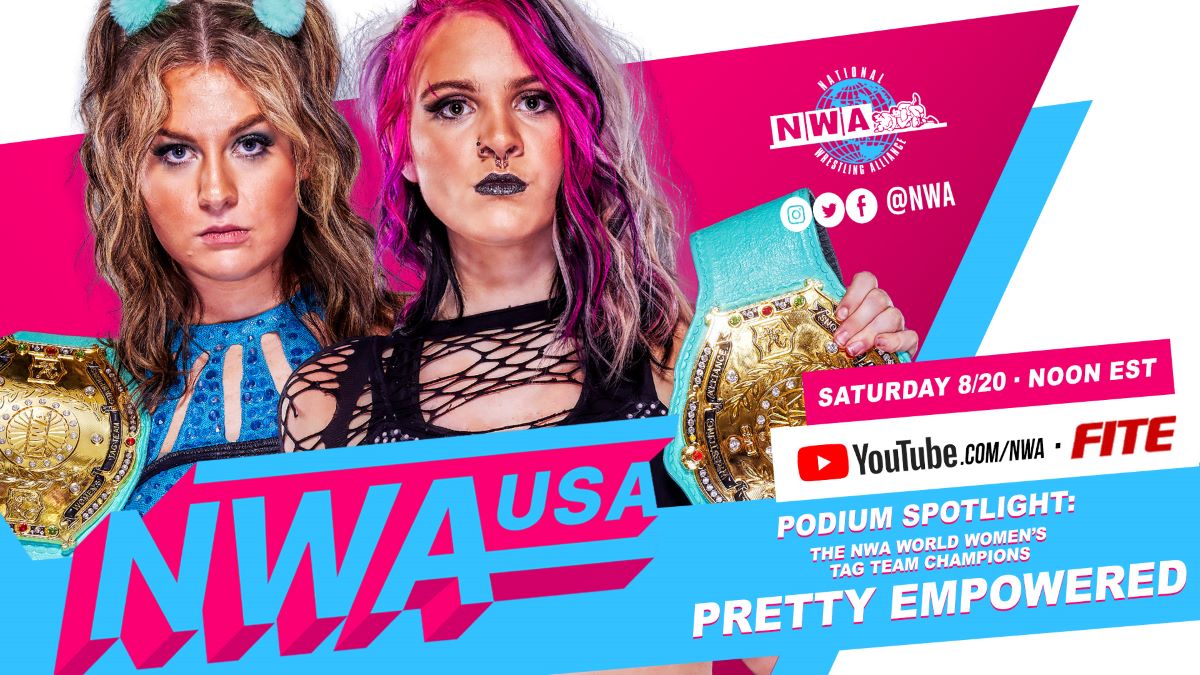 At The Podium with Kyle Davis is the current NWA Women’s Tag Team champions, Pretty Empowered.  Ella Envy has a surprise for Kenzie Paige: they will face each other at Celebration 74 this Tuesday, and this friendly competition will determine who will control the direction of their tag team unit.  Paige doesn’t recall this conversation, but Ella promises she won’t steer her wrong.  Paige says that’s a red flag, and Ency retorts, “I don’t wear red!  I only wear pink.”  But she promises nothing will happen since she is Paige’s best friend.  Paige reluctantly agrees, but yeah…every teen movie and STAR WARS sequel tells me, “It’s a trap!”

May Valentine is backstage with Aron Stevens, Rodney Mack, and KC Roxx. Stevens addresses why he’s still in the NWA, and part of it is because he’s here to help Mack and return the help he gave him all those years ago.  As for those who are green (looking at you, Roxx) he wants to offer some guidance and give a little encouragement and add more polish to his wrestling repertoire (a LOT MORE POLISH).  But more importantly, Stevens booked the cruise to Rio de Janeiro, and Valentine is over the moon.  Valentine suggests that Mack and Jazz go on a cruise as well.  Roxx asks if he can come, but Stevens says no.  But he can watch their dog…not stay at the house with the dog, but watch over it.

Galli throws to the Junior Heavyweight division and how hot the action has been since Alwayz Ready.  There’s a clip of the end between Homicide and PJ Hawx but read here to see how all this took place and the simmering feuds that resulted afterward.

Now May Valentine is with Rush Freeman and Brady Pierce, wearing what looks like Chippendale attire. Freeman says he’s not dumb because he has a Masters degree(!) and notes that during his wrestling career he never really fit with any group he was in, and even though he founded The Ill-Begotten, he gets kicked out of his own stable (catch up here if you missed it).  Pierce adds that they are here to prove to The Ill-Begotten that they have more talent in one pinkie that in all of them combined.

Kyle Davis goes over what matches will be on NWA74 for both nights, but we’ll go over that later this week so keep your eyes open to Slam! Wrestling for that and a bunch of interviews with the stars of the NWA prior to the pay-per-view.

There are some highlights from BLK Jeez and Rodney Mack’s main event match from this last NWA POWERRR, but read here if you missed what took place.

Now it’s time for the Main Event, and we have… 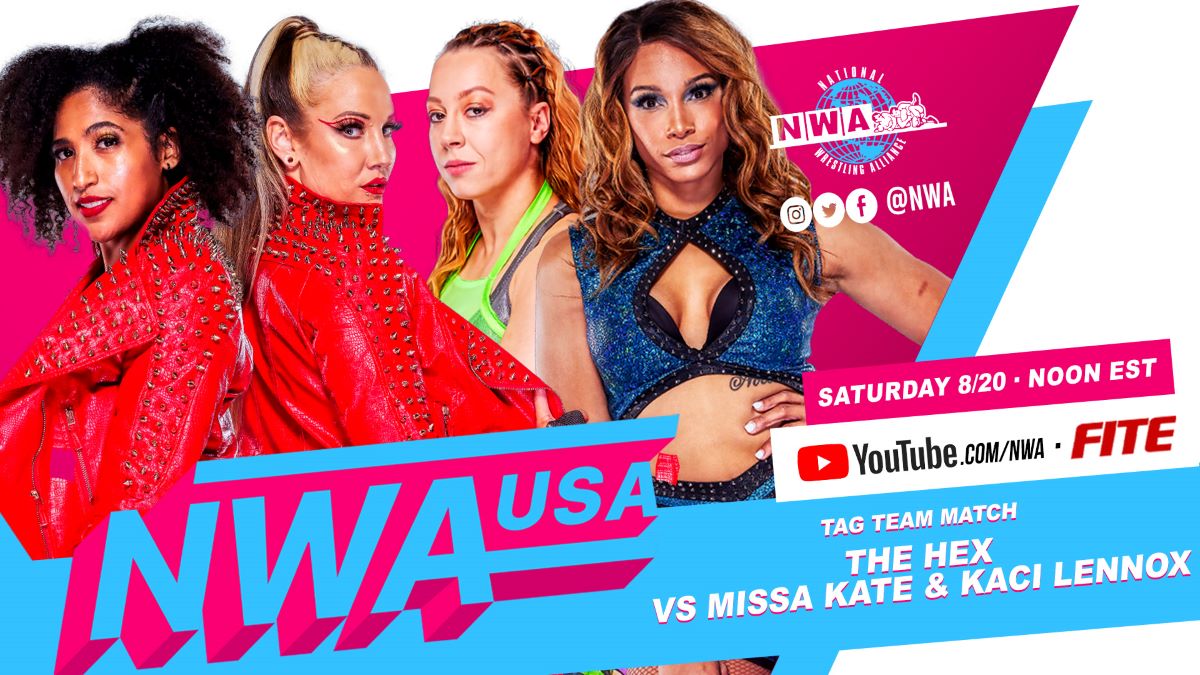 Galli mentions that Kate has faced The Hex with various team members, but still can’t get that elusive win.  The tag Chemistry is a played up huge when it comes to The Hex, but this might be the night for Kate and Lennox to upend The Hex.

The bell rings and Kay and Kate square off and go for some chain wrestling, but Kay is too powerful to stop.  That tag chemistry comes into play early on as Kay tags to Belle and now they keep her isolated in the corner.  Kay gets a neckbreaker to Kate and covers her for a two count, then she and Belle go for a double team with Kay getting a senton splash to Kate, and a running punt by Belle adds the extra point, but unfortunately only gets a two count.

Kate is being beaten in the worst way, and Lennox tries to get in but can’t get the tag.  She comes out but the ref sends her back, and now Belle comes out and the ref tries to deal with that.  Kay sends Kate to the ropes, but Lennox grabs her and Kate gets a forearm to Kay’s back to knock her down.  Finally, she gets a tag to Lennox, and she takes time hurting Kay making her a Hex in Peril.  She continuously targets Kay’s lower back but just can’t put her away.  Tag back to Kate and then they double suplex Kay to further aggravate her bad back but still, Kate gets a two count.  Kay fights back and lands a massive clothesline that knocks out both women.  They crawl to their respective corners, but Kay is first to get the hot tag to Belle and she is a Hex en Fuego.  Pretty soon the match devolves to a Pier Four brawl, but once the dust settles Lennox is isolated by The Hex, and Kay nails a belly-to-back suplex and feeds her to Belle to deliver the Protect Ya Neck facebuster, and she covers her to end it in one, two, and three.

Your Winners via Pinfall:  The Hex

The Hex stand tall and have a ton of momentum ahead of their title match with Pretty Empowered at the PPV, as the show rolls to credits.

The Hex did the heavy lift for this show, and they looked pumped for NWA 74.  I’m really digging the dynamic with Ella Envy and Kenzie Paige, and this “Mean Girls” chemistry can only add another dimension to the team.

But, this is going to be a busy week for me covering the NWA ahead of the PPV, so see you all soon!