NWA POWERRR: A title shot in the eye of the Storm 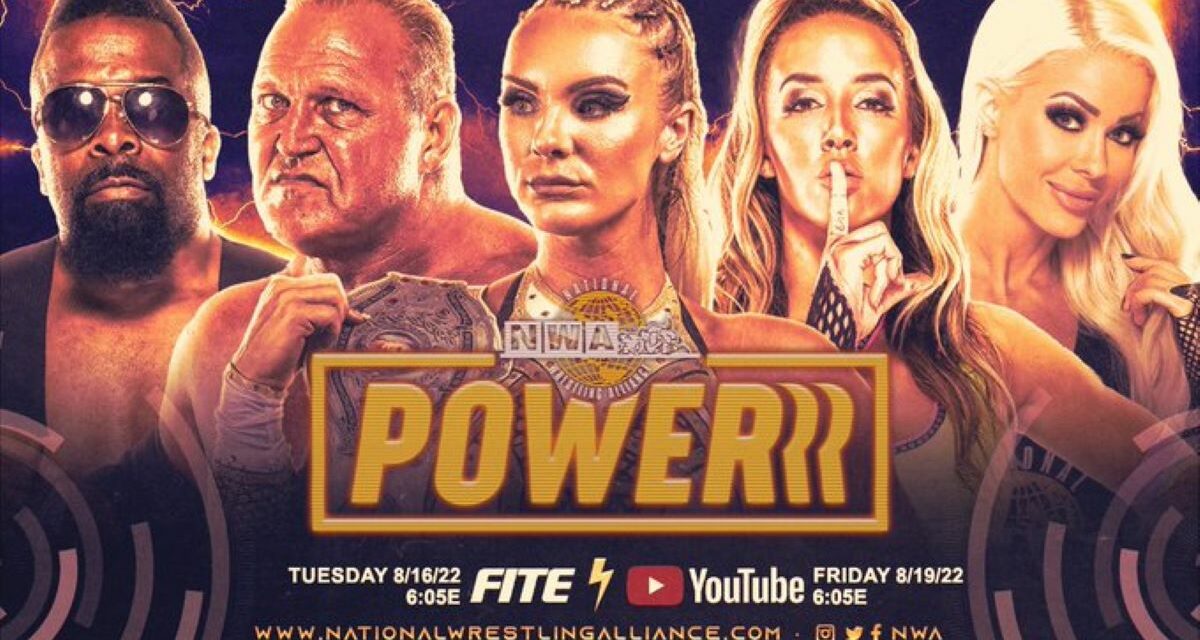 We’re in the final stretch before NWA 74, and this show has everyone getting ready to step Into the Fire at the Chase in St. Louis   There’s a lot of different matches to get through and new faces wanting to prove themselves in the National Wrestling Alliance, so as we go the Skyway Studios in Nashville, TN, Joe Galli and Velvet Sky have the call.  Tim Storm will be in active competition, so let’s head to the First Match of the night, and it’s… 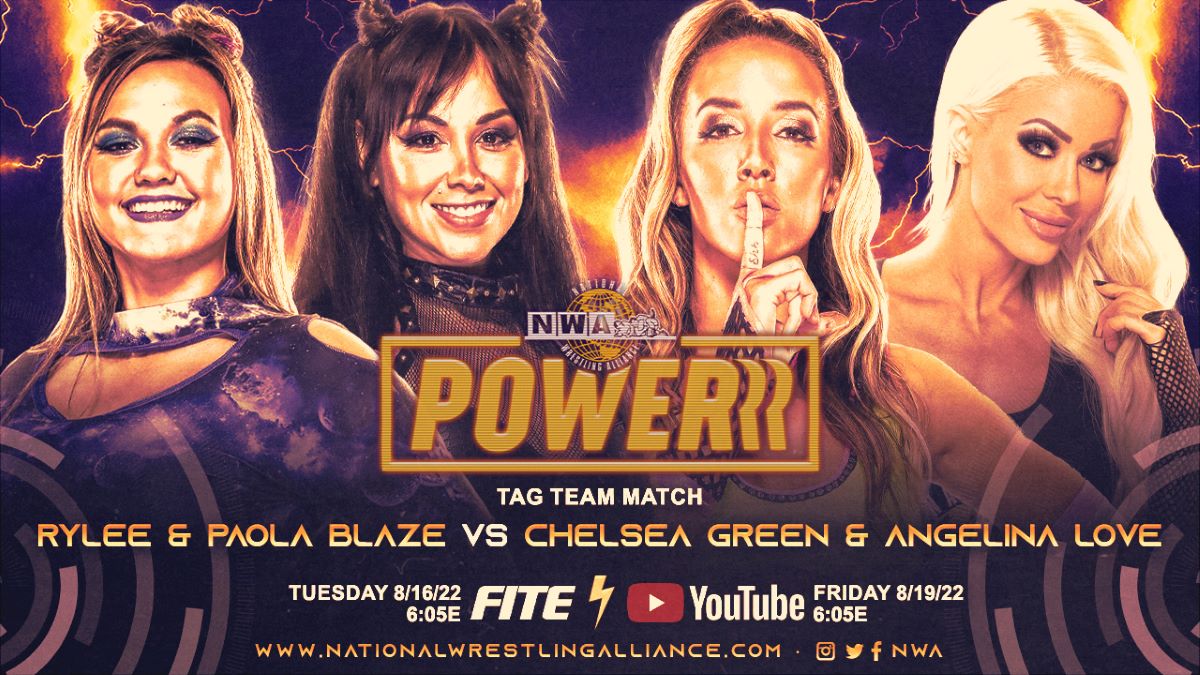 Sky is not happy that her Beautiful People counterpart is aligned with Green, but she says she’ll support Love being in the Squared circle.  Let’s see how long that lasts.  Another fun fact is all four women will be involved on Night One of the double PPV, where each woman we’ll have a shot at being a number one contender for The Burke, held by Kamille.

As for the match, Rylee is isolated by Love and Green, and Blaze is on her smartphone “checking her Instagram,” as Sky reports.  Green and Love are more cohesive as a tag unit.  However, Rylee tries to make her way to get the hot tag, but Blaze is absolutely oblivious.  Rylee fights out, and nails a (botched-looking) springboard cutter on Love.  However Green knocks off Blaze from the mat and Love nails the Botox Injection on Rylee for the pin and the win.

Your Winners via Pinfall:  Angelina Love and Chelsea Green

Kyle Davis is at The Podium with Jeremiah Plunkett.  Danny Dealz isn’t here as the spokesman for the group, but Plunkett talks about the dissent within the Ill-Begotten. He addresses it by calling out Rush Freeman and tells him that he has the size and the power…but no brains.  Plunkett fires Rush Freeman much to his disbelief (especially since he founded The Ill-Begotten in the first place!) and calls out the newest member, Brady Pierce.  Pierce has some concerns, though, as he thought this was a family unit, and what he’s seeing doesn’t square up.  If this is how they’re treated, Pierce rationalizes, then he doesn’t need this.  But Freeman and Pierce decide to have a bromance and catch up with some Dos Equis beers.  Plunkett is in shock, wondering what the hell just happened, and Davis quips, “You just ruined your group.”

The moral of the story, kids:  Bros come and go, but Beer bonds friends forever.  And that’s one to grow on.

May Valentine is with Chris Silvio, Esq. He announces that his client, Jax Dane, does not have to defend the NWA National title until NWA74, because he is the best champion of all time. So why is he here, Valentine asks?  Silvio replies he likes being around Valentine, and anytime he and Dane are on NWA POWERRR, it’s Dane Event time.  Good enough reason as any.

Now, to quote Todd Keneley, we travel to the “land of the big uglies” as the next match is… 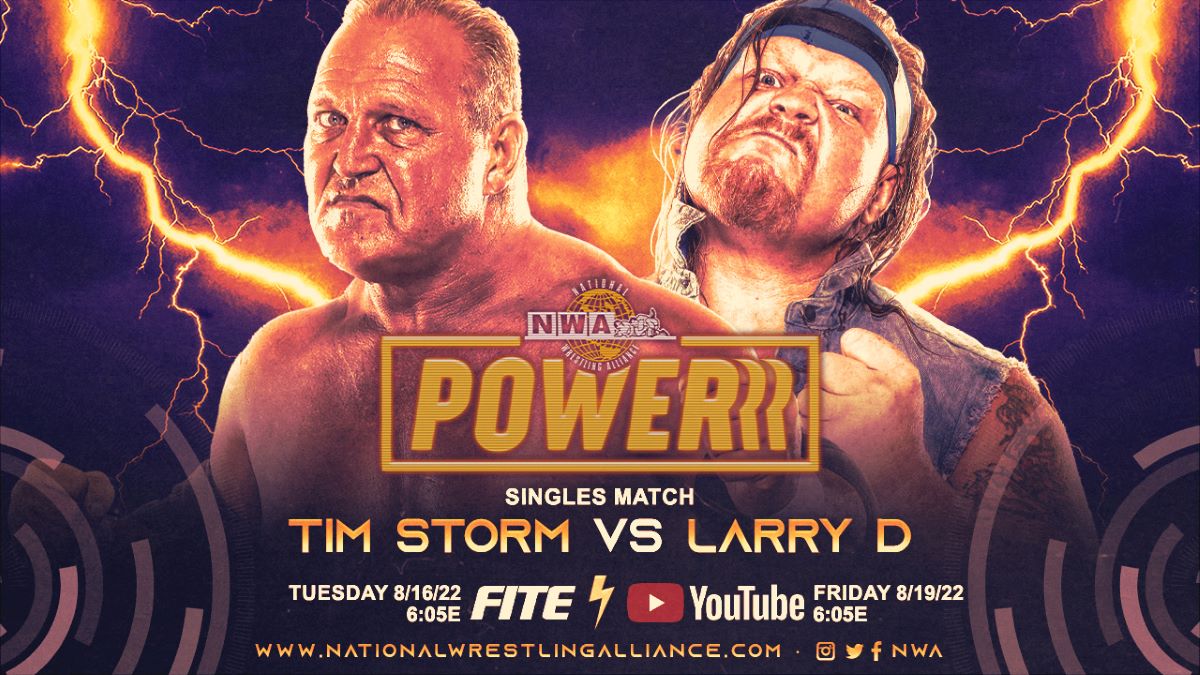 It’s good to see the former member of IMPACT Wrestling’s XXXL tag team find his way to the NWA, and this is just a straight hoss fight.  But Momma Storm’s baby boy is able to keep pace with the wrestling journeyman.  Larry D muscles Storm into the corner, and then starts raking his eyes.  Larry nails a big slam to a pin cover, but only gets a two count.  Storm comes back with clotheslines and misses with a big boot, but he delivers The Perfect Storm to Larry D to get the win.

Your Winner via Pinfall:  Tim Storm

Afterward, Sky asks Storm to come by the commentary booth.  She is very congratulatory, and thanks him for not only being a good co-worker but also as a good friend.  With that, Sky gives her title shot she earned from the Champion Series to Storm. 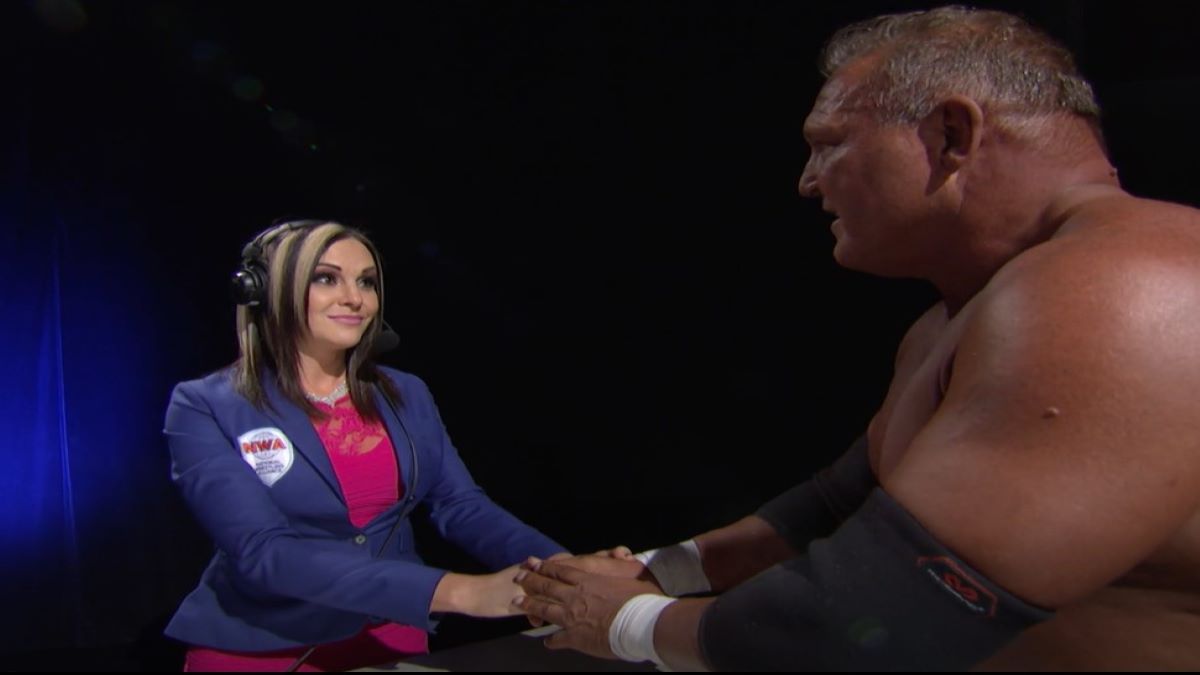 He is taken aback by this generosity and you can tell he’s choked up by this offer to maybe get one more chance at The Ten Pounds of Gold.  The fans applaud, as Galli says they have to send it to the back.

We see the match and the aftermath between Ricky Morton and VSK on this recent NWA USA but read it here, if you need to catch up.

Now let’s go to a non-title exhibition match between… 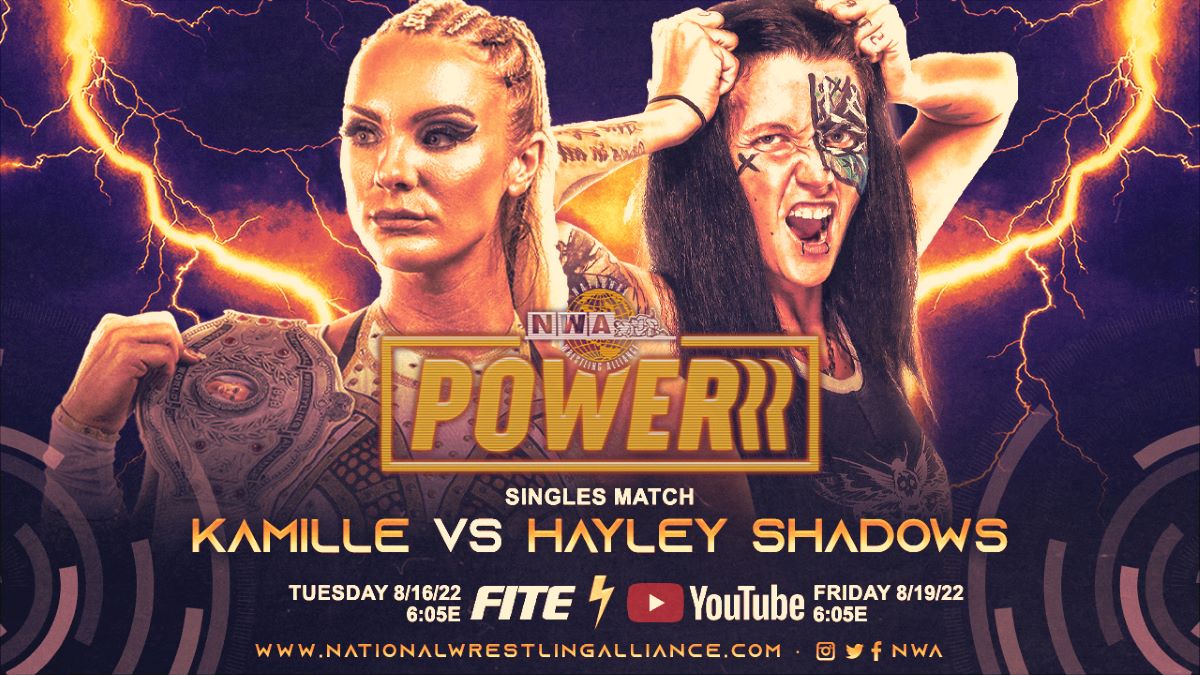 Galli mentions that Shadows is nicknamed “The Barbie Killer”, but Kamille is anything but a plastic blonde.

(Note to NWA Merchandise Staff:  If you haven’t petitioned Mattel to create a Kamille doll, or “Brickhouse Barbie” if you will, then I will patent that and get it trademarked immediately!)

The Brickhouse is going through her repertoire of clubbing blows to Shadows’ chest, then a gutwrench suplex.  She follows with a backdrop slam to cover, and that only gets a two count.  Kamille sends Shadows to the corner and hits a running knee.  She attempts the move again, but Shadows gets out of the way, and Kamille hits the top turnbuckle instead.  This is the opening Shadows needed, as she gets the educated feet on the Women’s champ, and punctuates with a roundhouse kick.  She covers the champ, but Shadows gets a two count.  She tries to pick up Kamille, but she ends up getting Shadows in a Firewomen’s carry and transitions to the steamroller.  That sets her up in prime position for a spear, and Kamille puts away the upstart.

May Valentine is backstage with Rolando Freeman, the “big brother” of Rush Freeman.  He ain’t happy with how Plunkett and The Ill-Begotten disrespected his family and “little brother” Rush. They’re on the whitelist!  Rolando says the same is true with Trevor Murdoch. He’s on the whitelist, too, after his beatdown. Better shine up the title nice for him, Rolando threatens the NWA Heavyweight champion, because he’s coming for it.

Kyle Davis with BLK Jeez, and “The Chruch’s Money” says the plan is working. He came for success, and so far title opportunities are stacking up, and his man Tyrus has a shot at the gold.  Now he needs the NWA Junior Heavyweight title, but he has a problem, and the management decided to book this upcoming match with Rodney Mack. Mack comes out and plainly states to Jeez’s face that he’s scared.  Mack challenges him further, but Jeez just stares and is struck dumbfounded.  Mack gets ready to head into the ring, and Jeez follows suit, so now we get your Main Event… 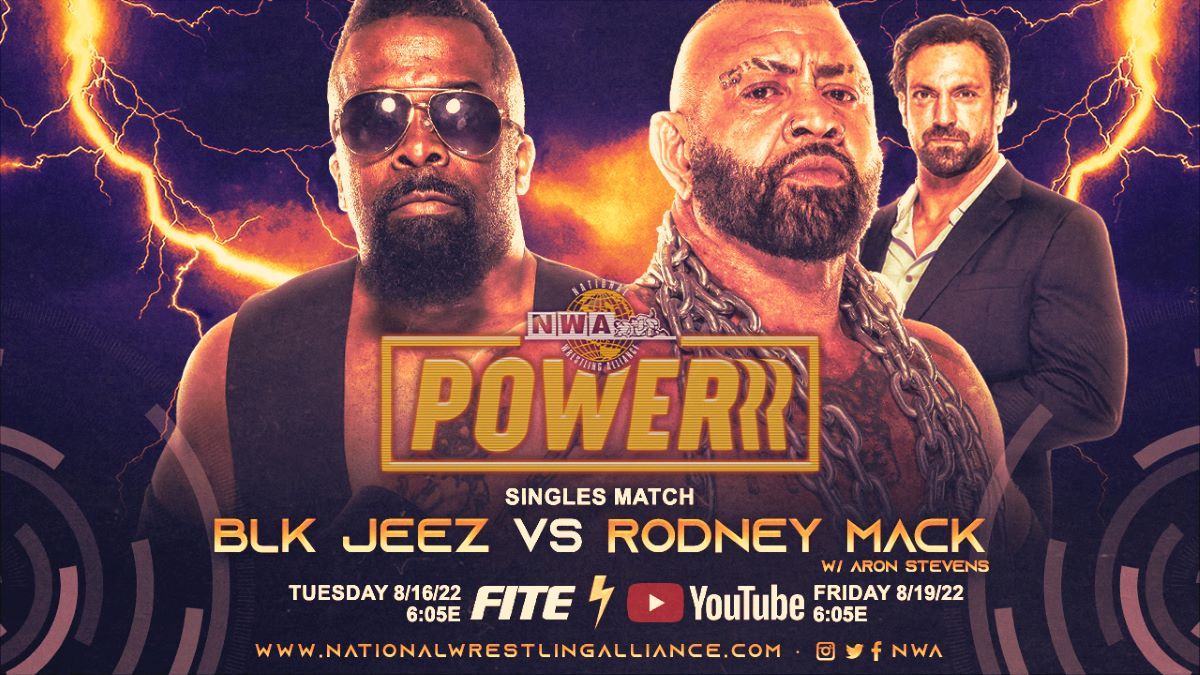 Mack just brings the pain to Jeez, and he rolls out of the ring to catch his breath.  Stevens follows, and Jeez doesn’t like it.  He quickly gets back in the ring, and Mack clotheslines.  He picks up Jeez and then unceremoniously slams Jeez to the center of the mat, and Mack covers for a two count.

This brings out Tyrus, and he comes out to cheer on Jeez.  As Mack hip tosses Jeez, he gets distracted by Tyrus, and Jeez uses it to his advantage to attack from behind and send him into the corner.  Jeez tries to bite the head of the Redd Dogg, and that was a poor decision, and he reverses an Irish whip to send Jeez into the corner.  He rushes, but Jeez gets a boot up in time to Mack’s face.  He climbs up the top turnbuckle and then lands a missile dropkick on Mack to cover for a two count.  Mack’s had enough and slams Jeez hard on the mat.  He stalks Jeez and then cinches in The Euthanizer and Jeez is put down by the Redd Dogg.

After the match is over, Mack lords the win over Jeez.  As he turns his back to acknowledge the fans, Jeez dropkicks Mack in the back to send him out of the ring.  Stevens Quickly gets back in the ring and attacks Jeez, and now that brings out Tyrus to the ring.  Stevens skedaddles out of there and grabs a weapon as he and Mack Stare down the NWA Television champ as the show goes to credits.

This was a bit of a hodgepodge.  Nothing to latch onto in the ring, but nothing bad either.  The one thing I found in the eye of this Storm (pardon the pun) was Sky giving her title shot to Storm.  With NWA74 around the corner, the question is will he use it then or bide his time?  It was a year ago that the team of Sky and Pope got their title shots, so this is a good time to cash in.

Until then, see ya next week for what to expect from NWA74!