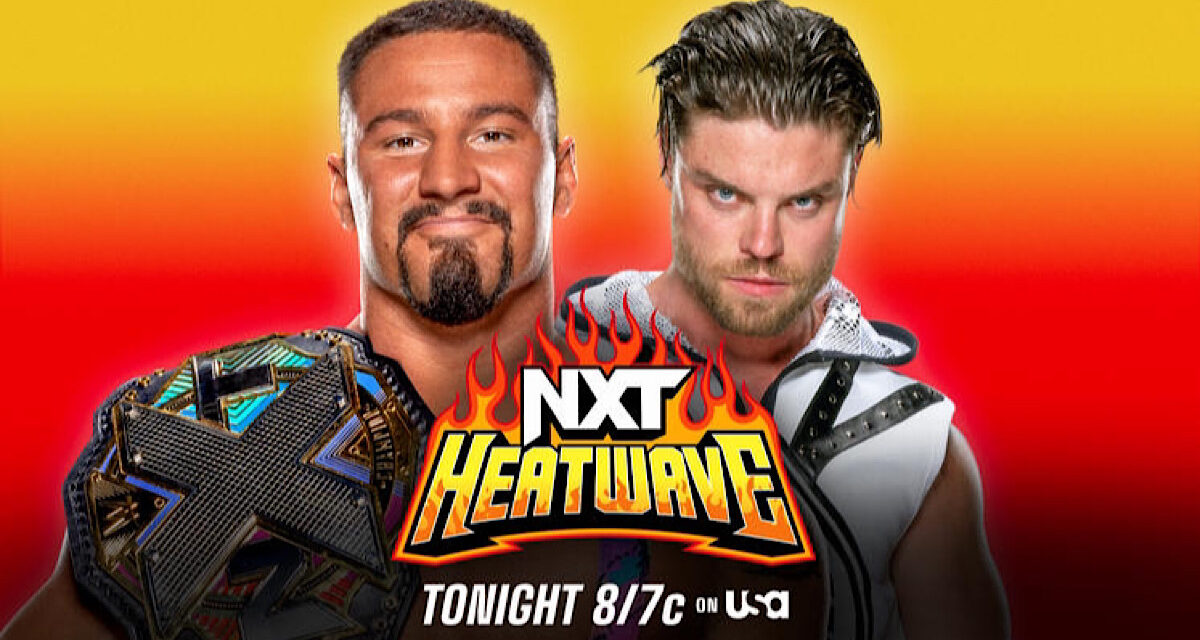 The Coffey Brothers, Wolfgang, Blair Davenport, and NXT UK Champion Tyler Bate crossed the Atlantic for tonight’s episode of NXT, stepping up to some of 2.0’s biggest title holders. The weekly programming is getting an interesting shakeup, but is the end near for the NXT UK brand?

Wade Barrett on commentary is “expecting a banger” as tonight’s opener can’t possibly underdeliver. The crowd is hot for Heat Wave, and Vinci lights them up while lighting up Hayes with chops before picture-in-picture. They trade athletic springboard maneuvers and numerous nearfalls until Vinci delivers a moonsault that’s interrupted by Trick Williams ringside. Vinci gives “Trick Willy” a powerbomb, but Hayes reverses the second attempt to retain the gold. The challenger had Orlando behind him, but Hayes isn’t slowing amid another great reign.

Mr. Stone boasts Von Wagner’s football abilities, but the caveman sends a message: “The game has changed, but the rules remain the same. Anyone smaller or weaker will not survive in my jungle.” This guy is a beast!

Diamond Mine enters the ring, and Julius Creed finally calls leader Roderick Strong out for sabotaging the faction with video proof. The Creed Brothers and Damon Kemp surround Strong, but from behind attacks Gallus of NXT UK. They attack all four members of Diamond Mine under the green light of Apollo Crews’ visions last week, which is admittedly some well-played continuity.

Roxanne Perez is interviewed backstage, talking about nerves and butterflies. Her totally unconvincing promo is contrasted by her opponent Cora Jade’s metal entrance before break.

Perez jumpstarts the matchup and dives onto Jade twice, but the latter takes control preceding picture-in-picture. Perez fights from underneath and finally makes the comeback until Jade grabs her big stick from the corner. Perez intercepts and foolishly contemplates, allowing Jade to capitalize with the pinfall victory. Although Perez, for whatever reason, is spoken about highly by fans, Jade is so much more complete as seen throughout this feud.

NXT UK Tag Team Champions Brooks Jensen and Josh Briggs’ interview is interrupted by Gallus, who are accompanied by security. They make a challenge for the straps next week, and the teams commence in a pull-apart.

A lengthy package recaps the four-month feud between Santos Escobar and Tony D’Angelo, making it seem like a top-tier Martin Scorsese film.

Champions Mandy Rose and Bron Breakker prepare backstage, and the latter is approached by Apollo Crews, who eyes the gold.

Legado del Fantasma’s cinematic entrance and hero’s welcome elicits a big fight feel, where if Escobar loses, he’s banished from NXT. Early on, Channing “Stacks” Lorenzo takes out Joaquin Wilde and Cruz Del Toro ringside, and D’Angelo capitalizes with a trash can lid preceding picture-in-picture. “The Don” controls with cans and chairs until Escobar makes the burning hot comeback, and Del Toro attacks Lorenzo with his own crowbar. D’Angelo inadvertently runs over Elektra Lopez before both competitors are grounded in-ring. “I will never give you my family!” shouts Escobar before they lunge for their respective brass knuckles and crowbar, but D’Angelo makes it first. “The Don” picks up the victory in a storytelling classic, capping a highlight feud for NXT 2.0.

NXT Women’s Tag Team Champions Katana Chance and Kayden Carter are congratulated by Indi Hartwell, who is given a letter by production. “Index Forever,” the note says, by Monday Night Raw’s rogue Dexter Lumis. But a debuting Blair Davenport from NXT UK appears, ripping the letter sent by Hartwell’s husband.

The feud between Wendy Choo and Tiffany Stratton is still happening, but it may finally conclude in next week’s Lights Out match. Apparently, the arena lights will be dimmed, which will go smoothly.

Another “scan here” QR code appears on-screen, and this time, it leads to an image of Stark standing tall with the NXT Women’s Championship. She immediately attacks the champion, but Rose targets her injured knee preceding picture-in-picture. Afterwards, Jacy Jayne and Gigi Dolin of Toxic Attraction are ejected from ringside with an assist from Nikkita Lyons. But Rose continues the assault on the challenger’s injured knee, and Starks fights through. She kicks out of Rose’s finishing knee lift, but the champion delivers another with Stark’s own knee brace for the victory. The unending reign for Rose continues, but this was by far her best defense yet.

NXT Level Up standout Quincy Elliot cuts a debuting promo, and “The Super Diva” is coming soon. It’s the provocativeness of Velveteen Dream but without the baggage.

Grayson Waller is interviewed backstage, announcing that his own talk show premieres next week. The Grayson Waller Effect’s first guest will be Apollo Crews, who Waller claims is taking everybody’s jobs.

Irish Patrick Bateman quickly targets the champion’s injured shoulder, and commentary describes McDonagh as a “surgeon” for his knowledge of human anatomy. Big Breakker impresses with kip-ups and moonsaults, but his unpolished movements are still present as a rookie. Following picture-in-picture, McDonagh controls with his neck-targeted offense, eventually cinching a Crossface. He delivers a huge Spanish Fly and Brainbuster for two, but Breakker recuperates with two spears. McDonagh rises with a bloodied mouth and laughs, but one last spear gives Breakker the victory.

NXT UK Champion Tyler Bate returns and metaphorically stands face-to-face with the NXT Champion (the talented Bate is a tad small). “Could worlds be colliding here in NXT?” commentary asks to close out a solid Heat Wave.

NXT special episodes continue to deliver with a strong Heat Wave card. Champions Breakker and Hayes never miss, and Rose had her best defense yet. But the superstars of tonight’s show were D’Angelo and Escobar, the former of which is proving himself to be a gem in short time.