NWA POWERRR: Champion Series is a fight to the finish 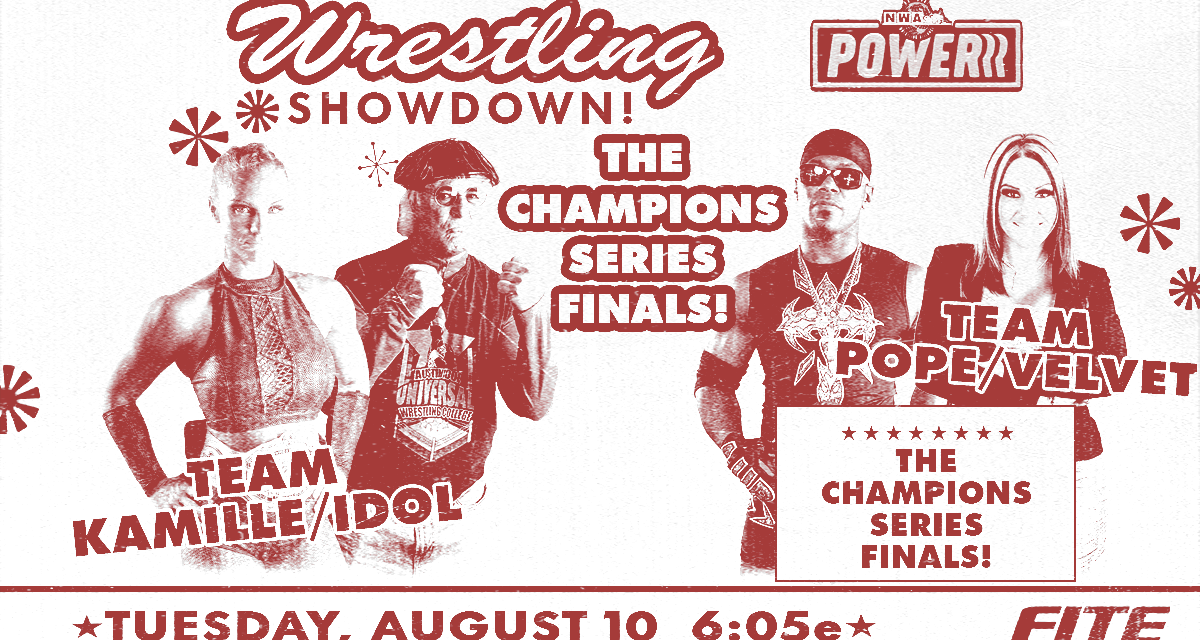 As the Champion Series winds to a close, and before we step Into The Fire, it’s time to take a moment and meet up with…The Losers. 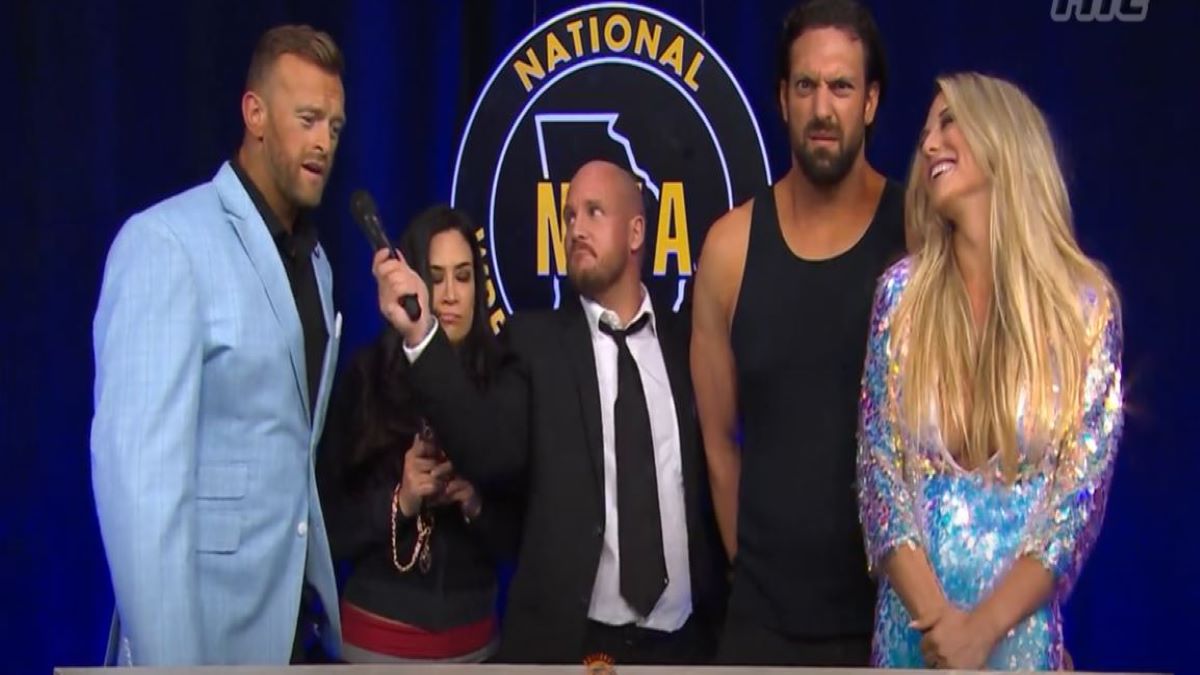 Team Aron/Taryn talk about their loss (or rather Taryn does in a way too bubbly way), and even Aron Stevens is wondering what helium entered through her hair.  Melina has nothing to say, so co-captain Nick Aldis says that this has been Corgan’s Conspiracy Series, and isn’t happy with how things went.  Methinks he doth protest too much, but let’s get ready for the final round coming up.

Quick Asides: You’re probably wondering why this recap is on Wednesday night, and you know what that means…Oh, wait, That’s crossing into Tylwalk’s Territory.  Nevertheless, FITE.TV put this up yesterday via Twitter:

We’d like to apologize to @nwa and the fans who were upset at not being able to watch #NWAPowerrr tonight. It will air tomorrow at 6:05pm ET. We’ll fix a few things to improve our process, as we love this league and its awesome family.

Also, you might’ve noticed last week that there was an episode of NWA POWERRR on YouTube…an EXTRA-POWERRRED edition.  I did not get the chance to catch it until late, due to seeking out a championship story of Bar Fites in Utah that I’ll get to soon, but here’s what you missed, since you’re not really doing anything productive at work…

There.  All caught up.

Back to Kyle Davis with captains Da Pope and Kamille. Kamille knows her team will beat Team Pope/Velvet Sky’s “weak ass team”, and Pope begs to differ on her opinion.  Who will get the big win?  That remains to be seen.

Meanwhile, the Deep Voice plugs the upcoming dual PPV’s coming up this week (you got your tickets and/or subscription on Fite.TV, right?), and DV announces that the winners of the Champion Series will get…

Seven title shots, one for each captain & participant. The title shots can be redeemed at any time.  Lots of possibilities for how this swings for everyone, and the next matches are crucial.  But these next three matches will be decided by the respective team members themselves.

We then see Team Kamille/Idol huddle up, and Mims announces their teammate Thom Latimer will face Trevor Murdoch, and Team Pope/Sky have Jennacide announce that Jax Dane is going up against Mims. Final decision from Team Kamille/Idol is Your Pal Sal Rinauro goes against Colby Corino, and Corino is relishing the opportunity.

From there, Joe Galli and Tim Storm have the call, and are joined by Nick Aldi, as he peddles his conspiracy theory of the Champion Series, and once again, Tim Storm has the best eye roll in the business.  But let’s get down to the First Match… 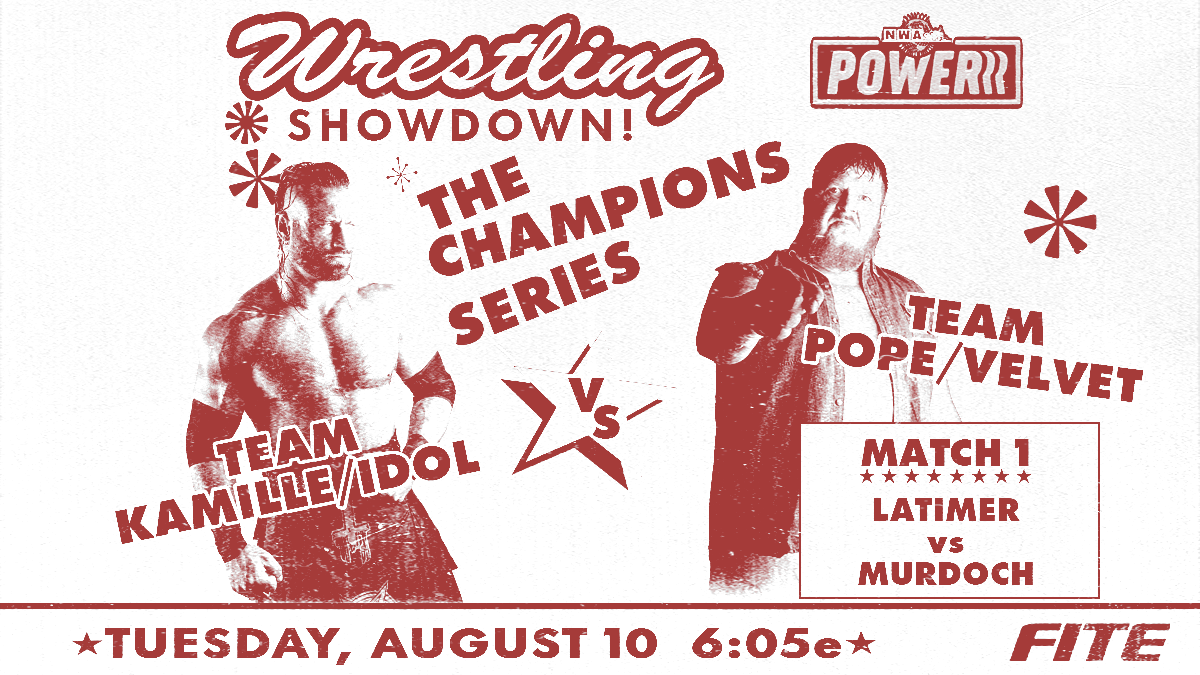 Kyle Davis announce the matches have no time limit, and there must be a victor.  With that, the bell rings and both men are swinging away for the fences, and Murdoch gets the upper hand in this brawl for all.  Murdoch chops away The King of All Evil in and out of the ring and send him to the steel steps with Snake Eyes.  Murdoch is in control, until Latimer hits a neckbreaker on the ropes to the big man, followed by a pop up power bomb.  Latimer whips Murdoch hard to the corner and gets in a swinging neckbreaker to cover for a count of two.  Latimer hammers at Murdoch but can’t put him away, even with a gut wrench suplex.  Murdoch is in the corner, and Latimer misses a tackle.  Murdoch goes up the high rent district and hits the flying bulldog, and gets the pin.

Your Winner via Pinfall:  Trevor Murdoch, and Five Points for Team Pope/Velvet Sky

After the match, Aldis bad mouths Murdoch and swears he’ll never win, before slamming the headset down and walking away in a huff.

With Team Pope/Sky looking good on the scoreboard, let’s see if the momentum continues with the next match, which is…

This is a powerhouse style match with Dane leading the charge, but Mims answers back with a flying shoulder tackle.  Think this is an even matchup?  Well, I thought so until Dane delivers with a huge belly to belly to launch Mims halfway across the ring, and this is where you see Godzilla stomp Little Tokyo.  Dane works over Mims, targeting the knee and legs of Mims, a la The Garvin Stomp. Dane keeps up the offense on Mims, but Mims powers through and hits a second rope shoulder tackle, and then gets a clothesline and a high uranage to cover for a two count.  Mims goes to splash in the corner, but gets caught by Dane to another suplex launch, and Dane is back to working over Mims.  Mims is sent to the corner, and Dane rushes.  Mims gets out of the way, and Dane hits the top turnbuckle.  With Dane dazed, Mims rolls up for the upset victory.

Your Winner via Pinfall:  Mims, and five points for Team Kamille.

The score is tied up between both team, and the final match will determine who gets The Prize.

Once again, Kyle Davis at The Podium, and Nick Aldis comes out in his ring gear with fellow stablemate Chris Adonis, and Davis acknowledges his presence (not in a Roman Reigns way), and the champ has this to say:

Aldis:  Well, Kyle. Thank you so much for that sterling introduction, because things didn’t exactly go very well in the Champions Series. But the reality of the situation is, I don’t really call it the Champions Series… I call it the “Conspiracy Series.” You see, when it comes to formulating a championship team, I had already done that. That team is known as Strictly Business.  Of course, old goalpost mover himself, William Patrick Cogan, decides once again he’s going to do something wishy-washy, hokey-pokey, flim-flam-y, “Oh is this terrible ,people put him in random teams you got to pick” whoever you are. Hey, you know, even a Michelin star chef needs good quality ingredients, and aside from Crimson, what I was left with was the rotten stuff at the bottom of the barrel. I know this to be true. When you talk about high quality, let’s talk about The Masterpiece, Chris Adonis. By contrast, I’m stuck with the person who let’s face it was the most responsible for the lackluster performance of Team Aldis, and that’s Jeremiah Plunkett.

Davis:  I’m sorry, Jeremiah is the alternate on your team. He’s not even one of the main competitors.

Aldis:  Yeah, he lived in an alternate universe where he thought that he could compete here in the NWA.

Strange, since it was Plunkett that actually got them points during the Champions Series, but, Aldis mighta forgot, huh?  Well, all this brings out Plunkett, who puts over how successful they’re been in Strictly Business, but calls them miserable. When Plunkett was in back with the crew, he happened upon Aldis’ old roommate and that guy can’t stand him either.  Plunkett says he will be his tag partner. Who is it, you ask? 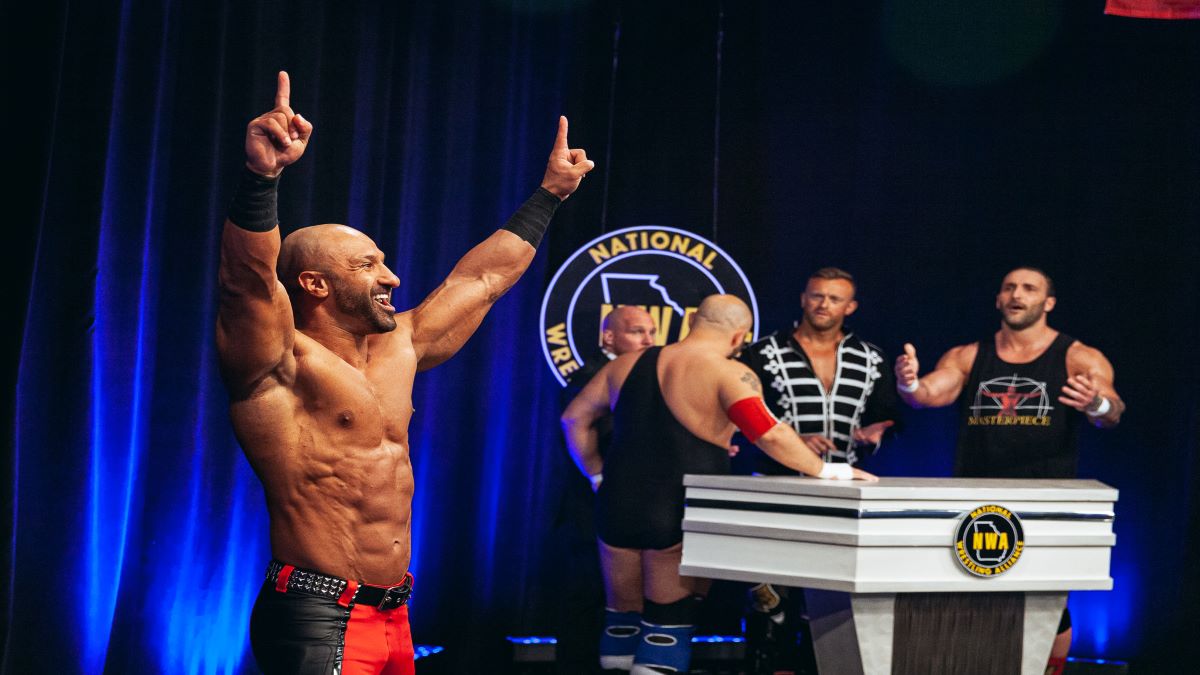 Daivari puts over the champ and says he saw something in the former Brutus Magnus (ouch!) that other company never did, and calls out The Dealer himself, and says he’ll double down: if he and Plunkett win this match, he owes Daivari a shot at the title. Aldis tries to talk him out, and Daivari says, “No need to be a little bitch about this.  It’s Strictly Business.”

Double Zing!  Them’s fightin’ words, and we head off for a tag match. 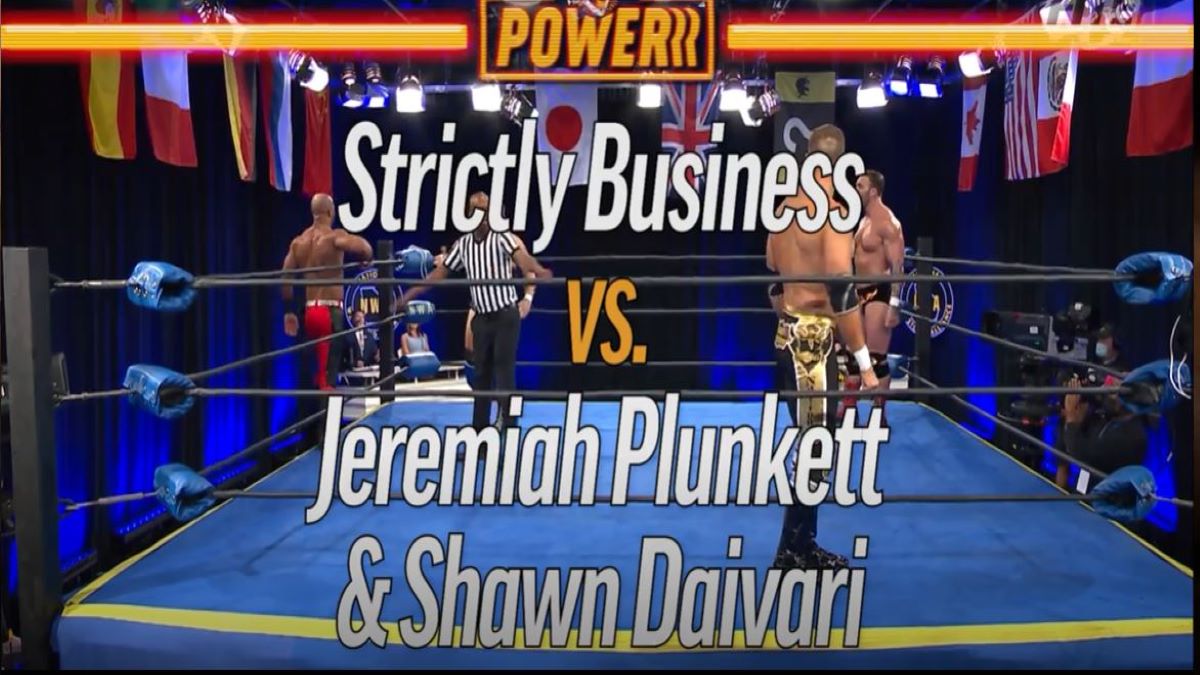 Plunkett and Adonis start, but Adonis is imposes his will on the Taterville Titan ™.  He goes for the elbow drop but misses, and Plunkett takes over on Adonis.  Tag to Daivari, and he keeps up the pace, overpowering Adonis and Aldis with some beautiful vertical suplexes.  Tag back to Plunkett, but Aldis reverses to a Michinoku Driver version.  From there, it truly is Strictly Business double teaming Plunket.  Adonis has Plunkett on his shoulder ready to send to a running power slam, but Plunkett wriggles out and hot tags to Daivari, and he is your Persian Of Power, rocking both Adonis and Aldis.  Daivari sends out Adonis, and tags back Plunkett, who delivers a DDT on the heavyweight champ for two. Adonis takes out Daivari on the floor, as Plunkett goes up for a missile dropkick, but Aldis steps back and gets him in the Kingslayer Cloverleaf to tap out.

Your Winners via Submission:  Nick Aldis and Chris Adonis

Sadly, Daivari was a bust against The Dealer, but hopefully this isn’t the end of his run in the NWA.

But we need to focus on your Main Event, which is for all the marbles in The Champions Series, as the kids say… 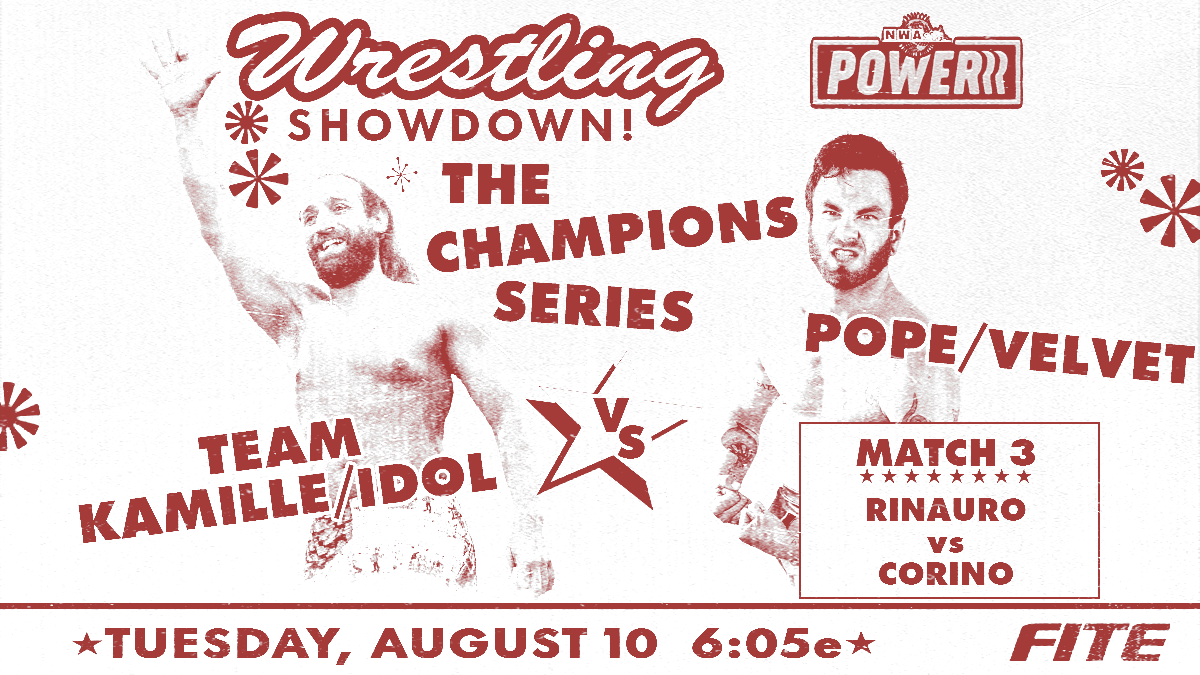 Both men are led out by their respective teams.  It wasn’t that long ago that Corino delivered that wicked brainbuster from the ring apron to the floor on Your Pal Sal.  Start of the match intros, Sal is super focused even with a taped-up portion of his shoulder, while Corino demonstrates he is a master of douchenozzlery.  Before the bell rings there is a hard slap by Sal, and off to the races we go.  Sal and Corino slug away, and both men have so much hatred for each other, with no quarter given.  In the corner, Sal punches at Corino’s head, but Corino grabs Sal and drops him on his bad arm on the ring ropes.  Sal rolls out in pain, and Corino smells blood and throws him to the steps.  As Sal crawls back in the ring, Corino tears off the bandage and focuses on wrenching Sal’s bad arm, as Sal howls in pain.

Sal tries to fight out, but Corino gets a Samoan Drop, and preens.  Sal schoolboys Corino for a count of two. Corino shoots Sal to the ropes for a clothesline to knock his lights out.  Corino has an answer for any offense Sal gives, with a leg drop by Corino for another two count.  Up top, Corino keeps up the barrage, but Sal powered through and gets a springboard stunner, then a clothesline and pin for a two count.  Sal gets his own revenge by catching Corino in a brain buster but is slow to cover and gets another two count.  Outside, Latimer is tired of this and sends a chair to Sal, but he won’t use it.  The ref sees it, and takes it away.  Meanwhile, Corino goes to his trunks for a foreign object that he uses to knock out Sal before the ref sees it, and he covers up Sal for the one, two, and three.

With that win, Team Pope/Sky have claimed The Prize, and so many options awaits as the raise their hands in victory as the credit roll.

Overall a solid show.  There was nothing that blew me away, until the end with the introduction of Daivari, Plunkett getting some promo time in, and the Sal Rinauro/Colby Corino match at the end added a few more points to the show.  Now, how this will translate to the upcoming PPV’s remains to be seen, but with everyone on  Team Pope/Sky, there are plenty of chances for title shots down the line.

Either way, see the shows in St Louis, or subscribe on the Fite.TV app, and I’ll see you in seven days….I hope.