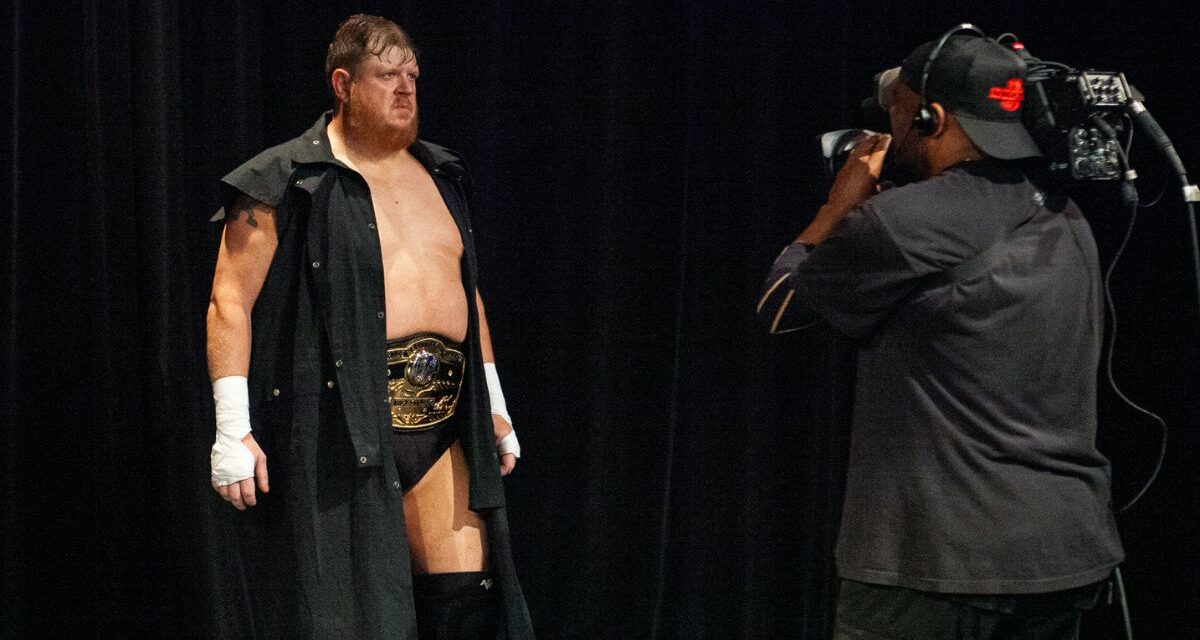 Trevor Murdoch is more pumped up and passionate than at any time in his 20-plus year journey in the squared circle. Looking ahead to the National Wrestling Alliance (NWA) 74 two-day event in St. Louis, August 27-28, Murdoch is “fully invested” and he says that “NWA 74 cannot get any more grand.”

“I’m looking to make a statement,” he said as he was driving home from a workout on Friday afternoon, August 12. “I’ve spent more time in the gym than at any time in my career. I am going to do what’s necessary for this win.”

Murdoch, who says he might not have really known the gravity of the NWA World Championship after winning the Ten Pounds of Gold from Nick Aldis nearly a year ago. “I felt I was winning it for Harley Race and the people.” Winning the championship was the culmination of a lifetime in the ring, where all the hard-work paid off. “Maybe I lost sight of the ball.”

Murdoch would go on to successfully defend “Sweet Charlotte” several times, and even formed a tag team with the former champion when “Strictly Business” turned on their founder. 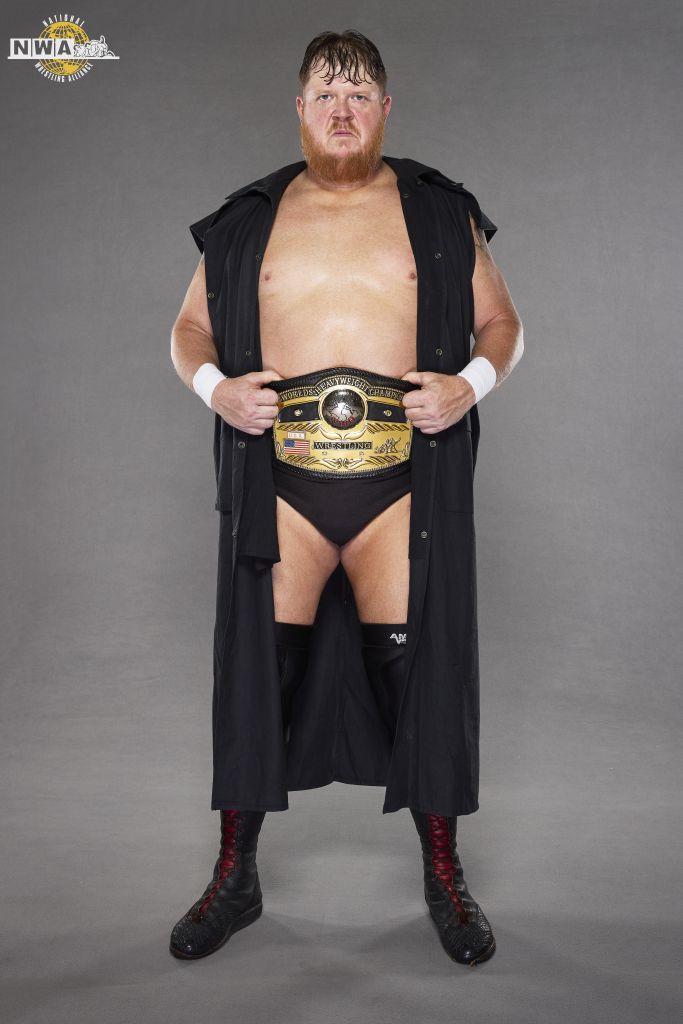 On February 12 at Valor Hall in Oak Grove, Kentucky, Matt Cardona upset Murdoch in a bloody contest after driving his head, face-first, into concrete outside of the ring. The referee allowed for Cardona to choke Murdoch with a tee-shirt and employ a chair before the challenger could hit his “radio silence” finisher. Murdoch fought valiantly, but ultimately it was Cardona’s day in the NWA sun.

Then when Cardona went down with an injury earlier this summer, Murdoch, who had gone undefeated in singles competition since the loss, was inserted in a Fatal Four-way – with Aldis, Sam Shaw and Thom Latimer – to determine the next champion. On June 11 at NWA’s Alwayz Ready. Murdoch once again became the man at the Top of the Mountain.

And while Murdoch has successfully defended the legendary championship several times over the past several weeks, he is scheduled to face his largest foe, Tyrus.

“I’ve got to give it to Billy Corgan,” Murdoch said, referring to the NWA owner and booker. “He’s given me the biggest and the best in Tyrus.” The NWA Television Champion is undefeated since arriving in the National Wrestling Alliance. “In fact, I don’t know when he last lost.” [According to cagematch.net, aside from tag team, handicap or other specialty matches, Tyrus last lost a singles contest to Ethan Carter III in TNA Impact on April 22, 2016.]

Nick Aldis had originally won the opportunity for the NWA title at NWA 74, but was unceremoniously replaced on July 21. Murdoch says he has “horse blinders on” and doesn’t care about the simmering drama around Corgan and Aldis. He does acknowledge the verbal, public jabs the two have taken at each other. “But I don’t care about that. I care about Tyrus at NWA 74.”

In an interview about his recently released autobiography, Tyrus, who defeated Da Pope during NWA Powerrr tapings in Atlanta for the NWA Television Title more than a year ago, said he believed that he was the true “Number One Contender” all along.

Murdoch chuckles at that notion, as historically the NWA National Champion (currently held by Jax Dane) had been recognized as the first the top challenger, but he also admires Tyrus for his ambition. “Tyrus is a smart man. Things do change. He’s waited for this opportunity.” 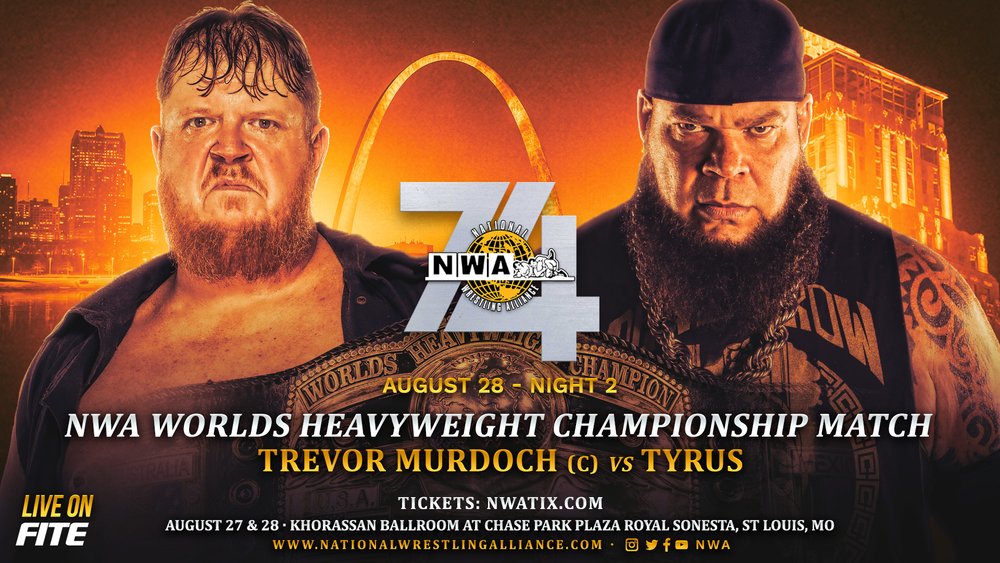 Tyrus is a monster of a man, at 6’8” and nearly 400 pounds, which dwarfs the 6’4”, 260-pound St. Louis, Missouri native. Incredibly, the two men have never faced each other in the ring. “That’s by design,” Murdoch adds, emphatically. “This is not going to be pretty. This is two hosses going at it. We will test each other’s mettle.”

Murdoch says that he has become more focused this time around with the NWA Championship. Some observers believe that his “change in attitude” makes this headliner a “heel vs. heel” affair. The Champion doesn’t see it that way. “I’m not the good, happy guy kissing babies,” he continues. “I am handling my business.”

He says that in the past he’s always “looked out for the company and his opponents.” But he notes that, “no one was doing that for me. Others have done way worse and are still considered legends.”

And if Murdoch is able to get past Tyrus, there is always the specter of a returning Cardona, who held the NWA championship and several others. “I’m holding the only belt that matters,” says Murdoch. “I’m raising my hand and I want another match with Cardona. I want to get my ‘W’ back.”

Before any of that can take place, Murdoch has to defeat the reigning TV Champion at NWA 74 at The Chase in St. Louis on August 28.

TOP PHOTO: NWA World champion Trevor Murdoch heads to the ring on NWA Powerrr to face The Pope. Photo by Hiban Huerta for the NWA