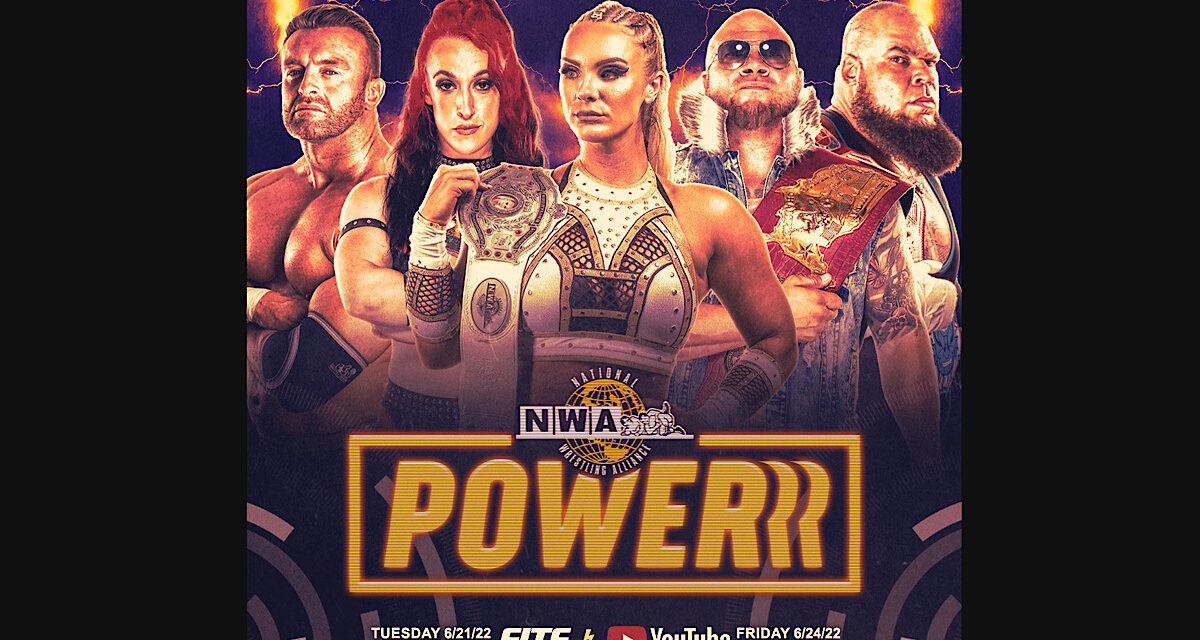 As the National Wrestling Alliance winds through Knoxville, we are still seeing the fallout from the Alwayz Ready pay-per-view, with KiLynn King and Kamille meeting face to face, and the Manster Tyrus and Cyon will be in tag team action against the Ill-Begotten.  Can the two rivals work well together under the IdolMania banner?

We’ll find out, as we head to the second night of the KnoxOut special event at the Knoxville Convention  Center in Knoxville, TN.  Joe Galli, Tim Storm, and Velvet Sky have the call.

As the show opens,  Tyrus is in the ring with Kyle Davis.  The reigning NWA Television Champion asks for a moment of silence for Mims as he recovers from his injuries.  Tyrus says for Mims to get well soon, but don’t come this way again.  He says he is the undisputed champion and won for the seventh time, and he can cash in for any title shot…or, he can go for another belt.  But tonight he will be in tag action with Cyon, and he’s happy that he and his “daddy” Austin Idol have reconciled.  Tyrus also congratulates “Cousin Trevor” on winning the Ten Pounds of Gold, and tells the crowd this is his world, and we’re just in it.

We go to a recap of the NWA Women’s Championship match at the Alwayz Ready PPV, but check it out here if you missed it. 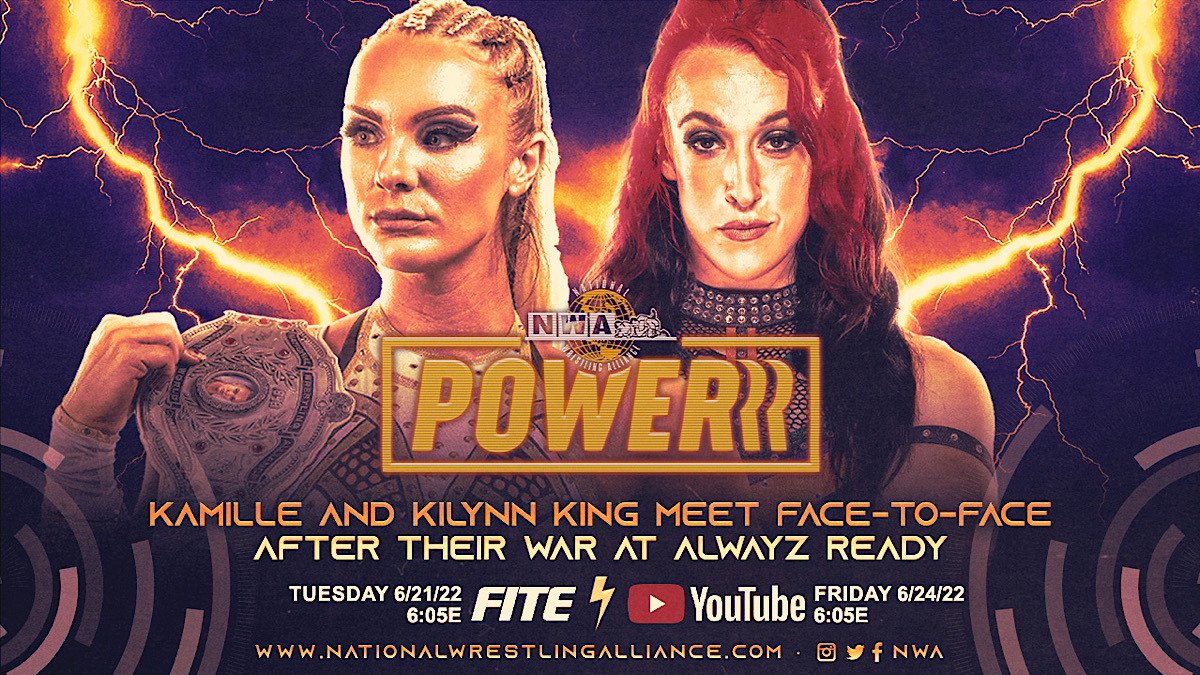 Now in the ring with Kyle Davis is the women’s one-time champion, Kamille.  As fans chant for the Brickhouse, she proudly states she has been champ for over a year.  But despite all the contenders, she is wearing the damage and gives fans a close-up shot of the chops she sustained in the match from King.  Kamille gives props and calls her out to the ring.  Kilynn King is out in her ring gear (because she’s always ready…see what she did?), and Kamille gives props for taking her to the utmost limits.  King agrees but says she will earn her spot and she will come for Kamille and The Burke, and she will always be a King.  Uhhh…yes, please.  I’d like to see more.

May Valentine is backstage with Homicide about Luke Hawx being disrespected.  He says to stop it to Hawx because they’re grown men.  But he’s a fighting champ, and he tells anyone around the glide that wants a shot at the belt to get their A-game up when facing the Notorious 187.

Now for the first match of the night… 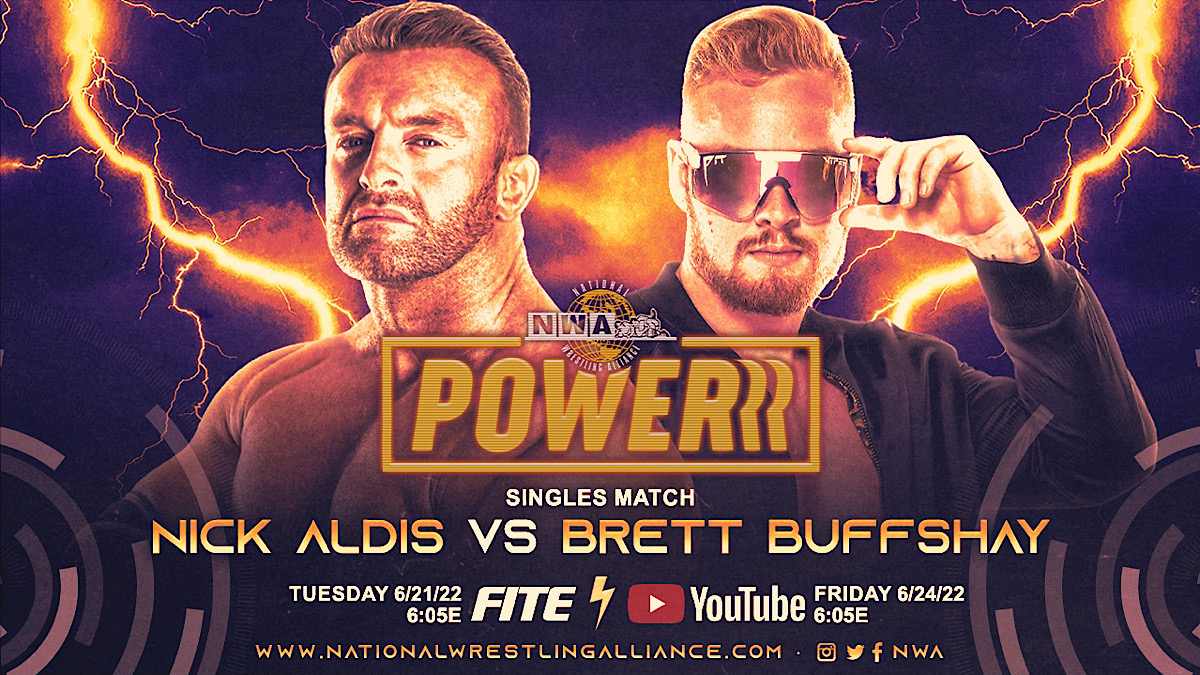 I know this is a squash match, but I will recap anyone faithfully that comes from my home state of Utah (even though Davis bills him from Atlanta, GA, and Galli notes he’s called “The Quad Daddy” because he doesn’t skip leg day).

Aldis is intense after his loss at the PPV and uses that frustration to take it out on Buffshay.  Aldis just takes apart the Quad Daddy like a Jenna puzzle, but props to Buffshay for staying with The National Treasure and not backing down.  He attempts a crossbody, but Aldis catches him and transitions into a vertical suplex.  Aldis pins his shoulders but lifts him up before the three count because he is toying with his prey.  Buffshay gets back up and tries a roll-up that gets a close two count, but Aldis stops playing around and gets a powerbomb into the Kingslayer cloverleaf for the quick tap out.

After the match, Kyle Davis in the ring asking about his current mood.  Aldis says he’s a victim of his own success.  It makes him a target for every sycophant and stooge that thinks they can take his spot, so The National Treasure says good luck to anyone foolhardy enough to try.  He even gives congrats to Trevor Murdoch for taking advantage of the situation and winning back the Ten Pounds of Gold but says if he ever wants to elevate himself from a paper champion to a real champion to come see him.

Well, the shots are fired, and we’re back to the rivalry it looks like.  Not a complaint if that is the case.

There are clips of Sam Shaw debuting on NWA USA, but read up here if you want to see this creepy bastard. 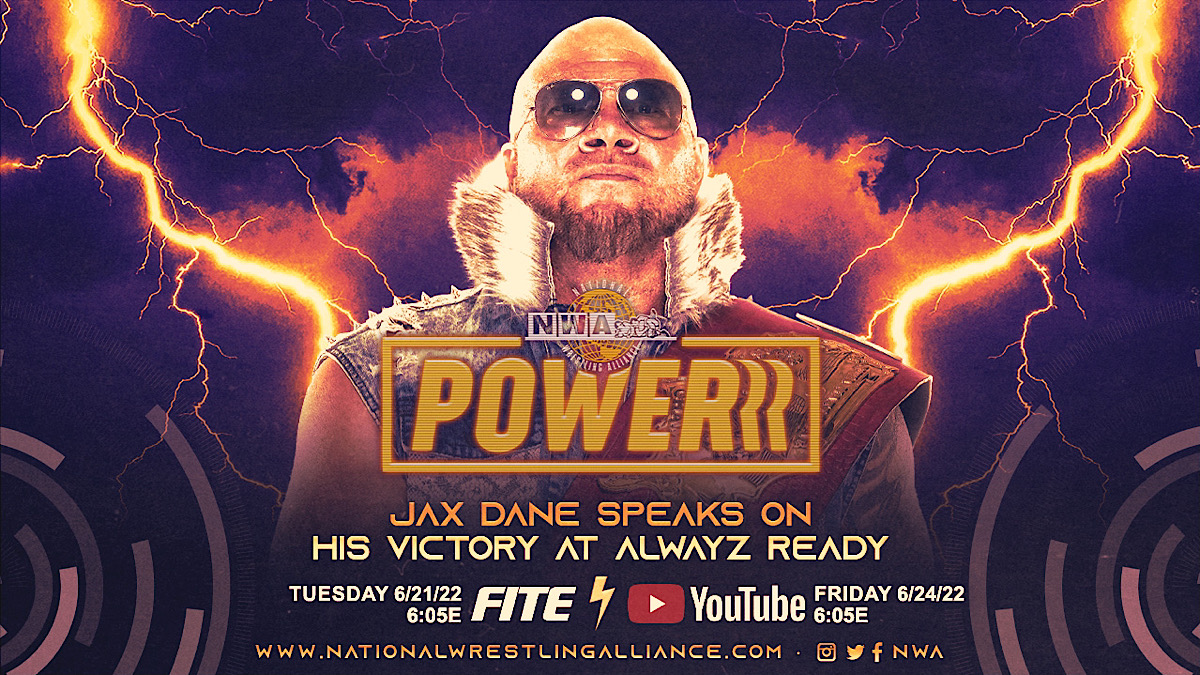 Kyle Davis is with Jax Dane, who speaks on his Alwayz Ready victory.  Dane tells Knoxville that they’re welcome for his time.  He goes on to say that no one has the guts to take the belt from him…but then Eric Jackson comes out to challenge him for the belt.  The kid had guts, but a Dane Event clothesline knocks him out.  Thanks for playing, kid.

May Valentine is with PJ Hawx to address his dad’s anger, and he just thinks it was a misunderstanding because of the confusion with The Fixers and everything getting convoluted.  PJ knows what his dad is like and he hopes it gets sorted out. 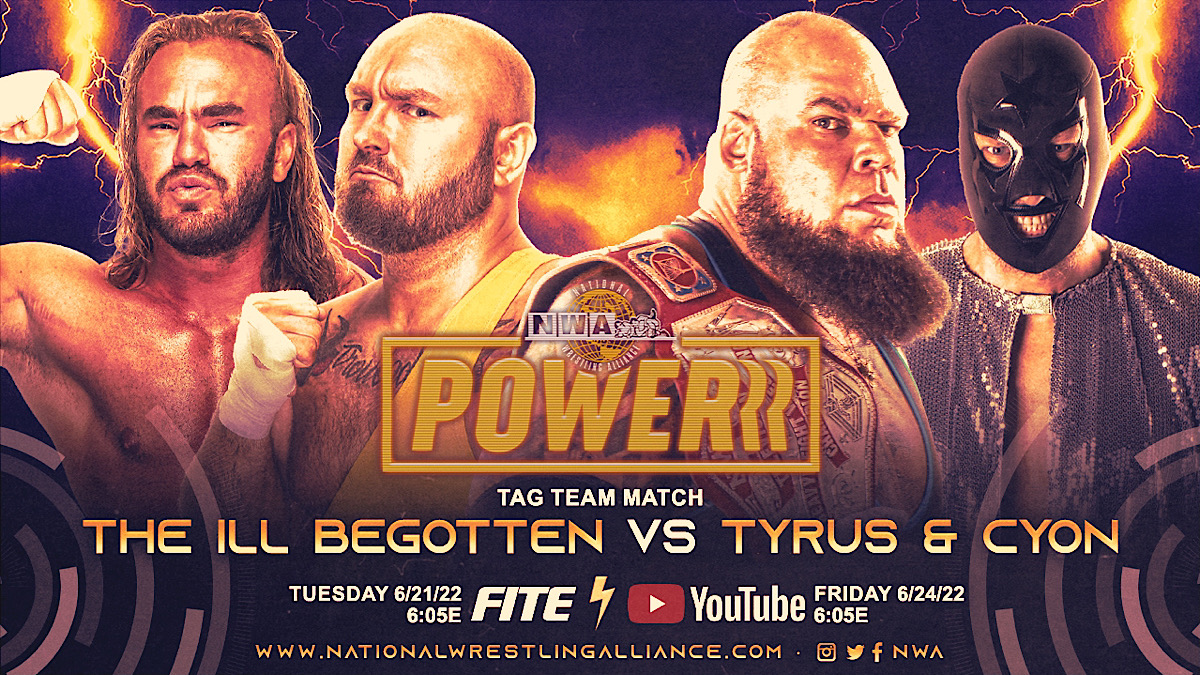 The Ill-Begotten (Jeremiah Plunkett and Alex Taylor) vs. Tyrus & Cyon

Danny Dealz is absent for The Ill-Begotten, as is Austin Idol for his team, as Galli explains the governing board of the NWA decreed no seconds at ringside should interfere.

Taylor and Cyon start and the Masked Man is taking him to school with his technical prowess, but Taylor fires back with arm drags and standing dropkicks.  Tag to Plunkett and lays in some fundamentals with arm drags and a hip toss.  There’s a nice tandem move that had Plunkett get Cyon in a flip to the ropes and Taylor stun guns Cyon on the top rope.  Now the Ill-Begotten are in the driver’s seat as they isolate Cyon in the corner.  It’s not looking good until Cyon gets Taylor in a tilt-a-whirl suplex.

Cyon tags in Tyrus and The Manster is methodical in working over Taylor.  Now he and Cyon focus on breaking down his leg, and Cyon gets Taylor with a single leg crab to driving his knee to the mat, and Taylor is an Ill-Begotten in Peril.  But Taylor manages to get the tag to Plunkett and he is a Hot Tater Peeler en Fuego as he cleans house and manages to stand toe to toe with Tyrus.  The match breaks down and Tyrus and Taylor spill out of the ring, but Cyon gets Plunkett on his shoulders for the DVD and he covers to get the one, two, and three.

Your Winner via Pinfall:  Cyon and Tyrus

IdolMania is running wild, as Austin Idol now comes out to celebrate the win with his protégés as the show rolls to credits

Again, more talking than action on this show.  Ill live with it if it leads to setting the stage for more action, especially since NWA 74 is just around the corner.

Also, like him or not, It is Tyrus’ world and he is making the most from his spot.  Now with Cyon in his corner that could add another dimension.

Thats enough pondering for now.  See you in seven!