What’s in the box? A Wrestling Mystery Blaster Box! 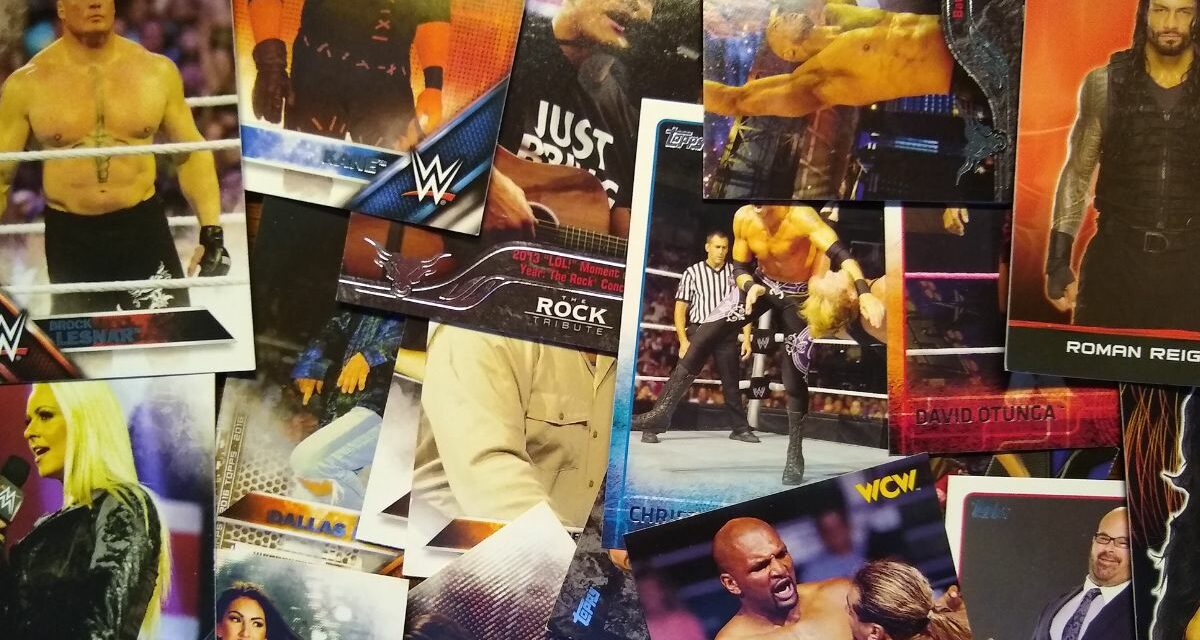 It’s only June and this has already been a massive year for professional wrestling trading cards. Since January 2022, pro wrestling trading card collectors have seen the inaugural release of AEW Upper Deck, in both print and e-pack versions, the debut of WWE Panini Prizm, and GCW’s latest Spring Break and The Collective sets, not to mention various other independent and custom wrestling card sets.

Within the past weeks alone, wrestling card collectors have been treated to WWE Panini Revolution, two new AEW e-pack releases (New Arrivals and Double or Nothing Match Dated Moments), and volume two of GCW’s Deathmatch All-Stars. It’s hard to think of a time when there’s ever been such a diverse assortment of new pro wrestling trading card releases. It’s legitimately exciting to be a collector of pro wrestling trading cards.

So, with all of these hot new options to choose from, what packs have I chosen to rip lately? Well, this week I ordered a 2017 WWE Wrestling Mystery Blaster Box! 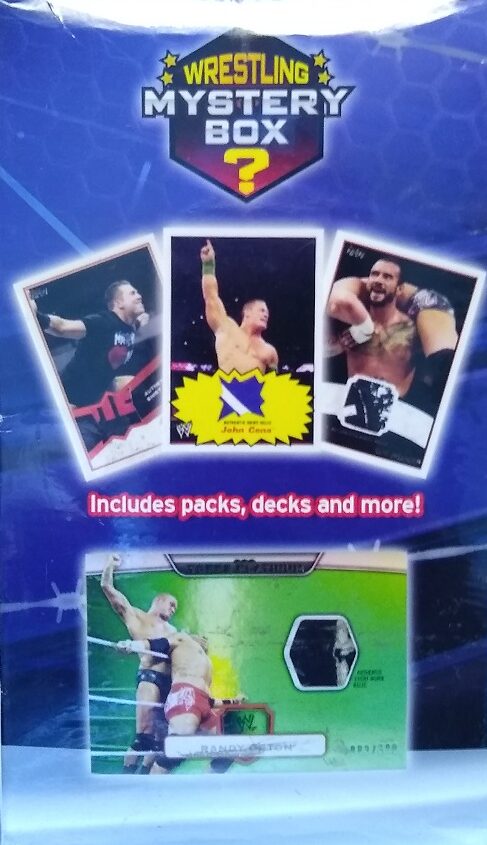 Now, I’ve got to admit, I’ve already opened, and in some cases written about, AEW Upper Deck, WWE Panini Prizm, and GCW Spring Break/The Collective, so the 2017 WWE Wrestling Mystery Blaster Box is far from my first wrestling card purchase of the year, but even so, why would I choose to spend my hard-earned money on a five year-old WWE Wrestling Mystery Blaster Box, when there’s so many current releases to choose from? Well, many collectors, myself included, compare packs of trading cards to gambling, or lottery tickets. Some people buy one dollar scratch-offs (packs of 1991 WCW Impel) while others play baccarat (an $8,000 case of WWE Panini Prizm). When I gamble, I like to have fun, like playing the Betty White slot machine, and the 2017 WWE Wrestling Mystery Blaster Box looked fun.

I found it by accident, while searching for other wrestling card releases, but I was immediately intrigued by the allure of the mystery box. The advertisement provided little information about the contents inside. There’s images of relic/patch cards of Miz, John Cena, CM Punk, and Randy Orton, and the text promised “one hit per box” and “packs, decks and more!” and that was about it.

These types of mystery boxes aren’t uncommon among other sport cards, and they’re pretty notorious for being full of cheap commons and junk wax, but I’m of the opinion that junk wax is in the eye of the beholder, and like I said before, I wanted to have some fun. When I ordered the Mystery Box, I wasn’t concerned with a return on my “investment.” I say it all the time: I don’t sell, I don’t flip, I only buy and trade cards. Whatever came in this mystery box, good or bad, I would be adding it to my collection. So, what’s in the box?

The first thing I noticed was the mystery box was heavier than expected. The mystery box was 11.6 ounces compared to an 8.2 ounce blaster box of 2021 Topps WWE Heritage. Yes, I actually weighed them. Next, the text and images on the mystery box provided more information about the contents than the listing online. One side of the box showed a pack of TeenyMates, the WWE version of LEGO Minifigures or Pro Wrestling Tees’ Micro Brawlers. The mystery box also showed packs of 2014 and 2015 WWE Topps Chrome, which was exciting to see, considering the recent explosion in popularity of certain Topps Chrome refractors and parallels.

When I opened the mystery box, the first thing to come spilling out was a sealed roll of 2009 WWE Power Chipz, which are like poker chips with WWE wrestlers (I won’t call them superstars) on them, with each chip/wrestler assigned a different value on a scale of two to six stars. Also, I discovered that much of the added weight of the mystery box was a result of a small, hard, black and red magnetized ball, which didn’t obviously have anything to do with WWE or wrestling. Next, there were 16 loose trading cards, which I concluded was an open pack of 2016 Topps WWE. Since these cards were loose in the box with the roll of Power Chipz and a hard ball, they were pretty dinged up. Unfortunately, the one guaranteed hit in the box was included amongst the loose cards, so it also got roughed up, but I’ll save that one for later. As for the sealed packs in the box, there was one 2010 WWE Rumble Pack (funny considering I recently bought one of these from someone on WhatNot), one pack of 2015 WWE Dog Tags, one pack of 2015 Topps WWE, one pack of 1999 Topps WCW/NWO Nitro (a nice little surprise as a non-WWE pack, even though I already own the complete base set), one pack of 2010 WWE Slam Attax, and one pack of 2014 WWE Topps Chrome. So, to summarize, my mystery box contained one roll of Power Chipz, one open pack of cards (and a hit), and six sealed packs of various WWE (and WCW) products. 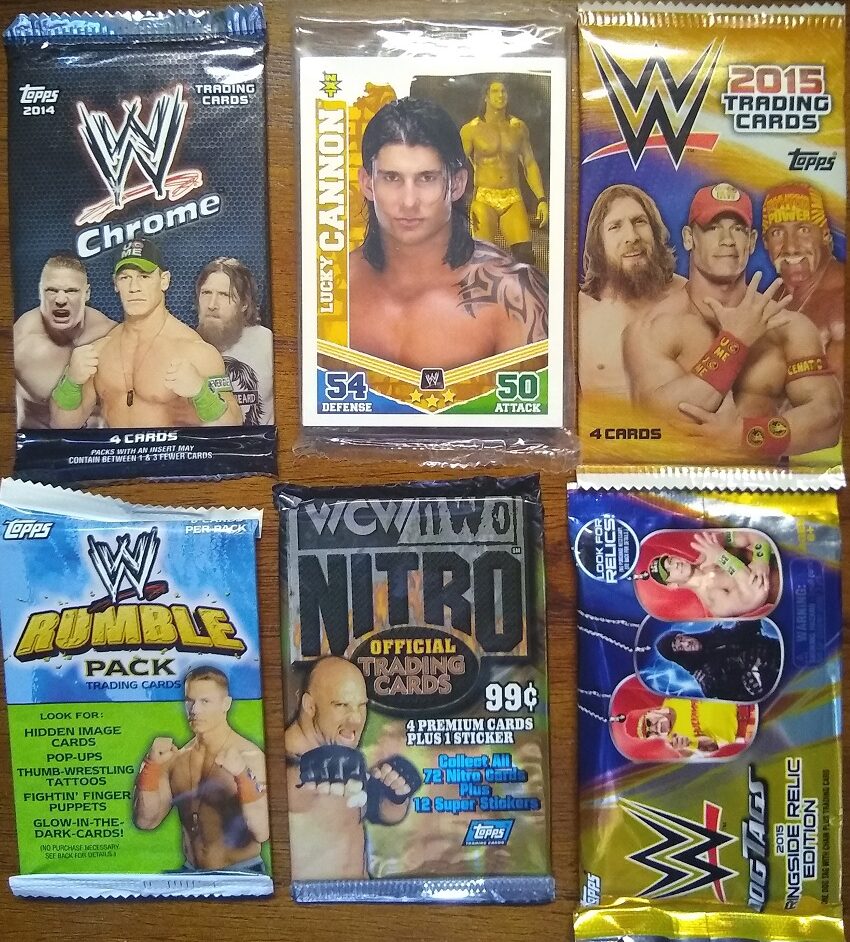 The first things I opened were the Power Chipz and Dog Tag, because these were the products I was the least interested in. I did get a CM Punk and Undertaker/Edge Power Chip, and a Roman Reigns Dog Tag, which included a Roman Reigns trading card that would’ve been pretty cool if it wasn’t completely warped and bent, but I don’t have much else to say about those.

Next I opened the pack of 1999 Topps WCW/NWO. I had no hope whatsoever that this pack would include one of the legendary WCW/NWO autographs, and it didn’t, but it did have a sticker I didn’t already own, featuring WCW v. The PAC v. Hollywood at Fall Brawl War Games, which was a minor addition to my Topps WCW/NWO collection.

After that, I opened the 2010 Rumble Pack, which is a set I only recently learned about. Clearly this was a set aimed at children but I rather like the colorful, frenetic card design. I think this was an interesting pack of cards, relatively speaking, including a glow-in-the-dark Jack Swagger (Jake Hager) and stickers of Shawn Michaels and CM Punk.

So, with three packs down and three to go, I started ripping the packs I was most looking forward to, and began with 2015 Topps WWE. This was just the basic, flagship set of Topps WWE cards. Out of habit, I looked at the back of the pack to review the insert odds, and I noticed something weird. Not only were there no odds on the back of the pack, but in place of odds, there was the disclaimer, “Topps does not, in any manner, make any representations as to whether its cards will attain any future value.” I couldn’t recall ever seeing this on a pack of trading cards, but maybe I just never noticed it before. Either way, that disclaimer was the most notable thing about this pack. I did get a Bo Dallas card, who I used to be a big fan of (I often think about his 2014 match against El Torito, which is good for a laugh), but there was nothing of real interest, let alone value, in this pack of four base cards.

The penultimate pack I opened was 2010 Slam Attax Mayhem. This pack was sealed in clear cellophane, so I assumed it must’ve come from a hanger pack or some other sealed box, rather than a standard pack. I knew ahead of time there were some good “rookies” in 2010 WWE products, including Daniel Bryan (Bryan Danielson) and Husky Harris (Bray Wyatt), so I had my fingers crossed, and with this being a much thicker pack than the others in the mystery box, I felt like I had better odds of pulling something good. However, while I’m saddened to report I didn’t pull either of the rookies I wanted, I did get a foil Edge Champions insert and a John Cena THQ Raw vs Smackdown insert, so I was relatively happy with this pack from a set I’ve really grown to appreciate. 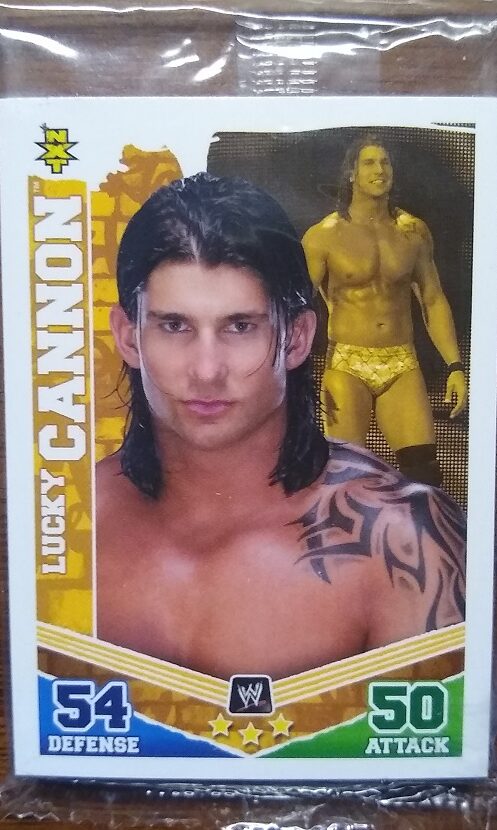 Our next pack is the main event of the evening, 2014 Topps WWE Chrome, but first, I want to create some suspense and divert your attention back to my one “guaranteed hit” of the mystery box. In short, the 2017 WWE Wrestling Mystery Blaster Box includes “one hit per box!” which typically means an autograph or a relic card, and just to be safe, the text on the mystery box clarifies, “hit includes relic or patch card,” because most collectors want an autograph. It almost doesn’t matter who’s signing the autograph, autographs are almost always perceived as superior to a relic or patch card. As I stated earlier, I saw my hit almost right away, after I opened my mystery box, because it was rolling around, all loosey goosey, in the mystery box with the opened 2016 Topps WWE cards, and the roll of Power Chipz and weird, magnetized ball, and as a result it got a little banged up. It is, by no means, a gem mint condition card, but it was a fun, albeit weird card to receive. The one guaranteed hit in my 2017 WWE Wrestling Mystery Blaster Box was a 2011 Topps WWE ring skirt relic of Undertaker. That’s right, a card of arguably one of the most collectible professional wrestlers of all-time, Undertaker, that includes a small, red swatch of a wrestling ring skirt that is “not from any specific match or event” (as stated on the back of the card). The 2022 Beckett Wrestling Almanac states it’s worth $15, the most valuable card in this set (tied with John Cena), but I’ll let you be the judge of that. 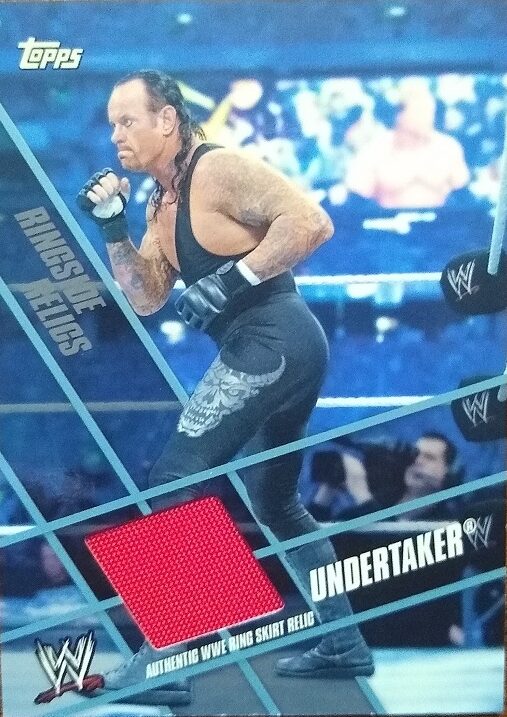 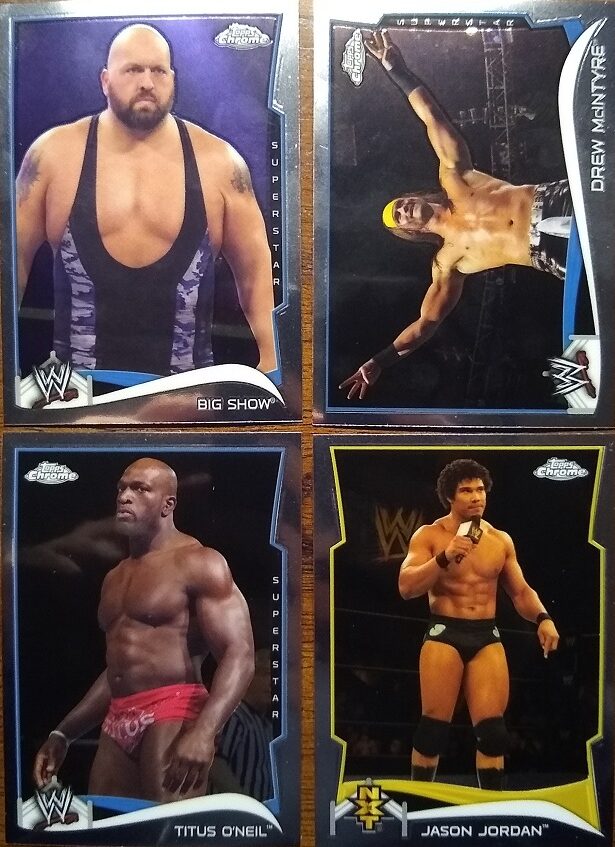 I previously compared trading cards to lottery tickets, but the great thing about wrestling cards is, while almost no one would think about keeping a losing Powerball ticket, even if you don’t open a “winning” pack of wrestling cards, and if you don’t risk more than you can afford, it’s fun to test your luck and collect the cards of your favorite professional wrestlers.