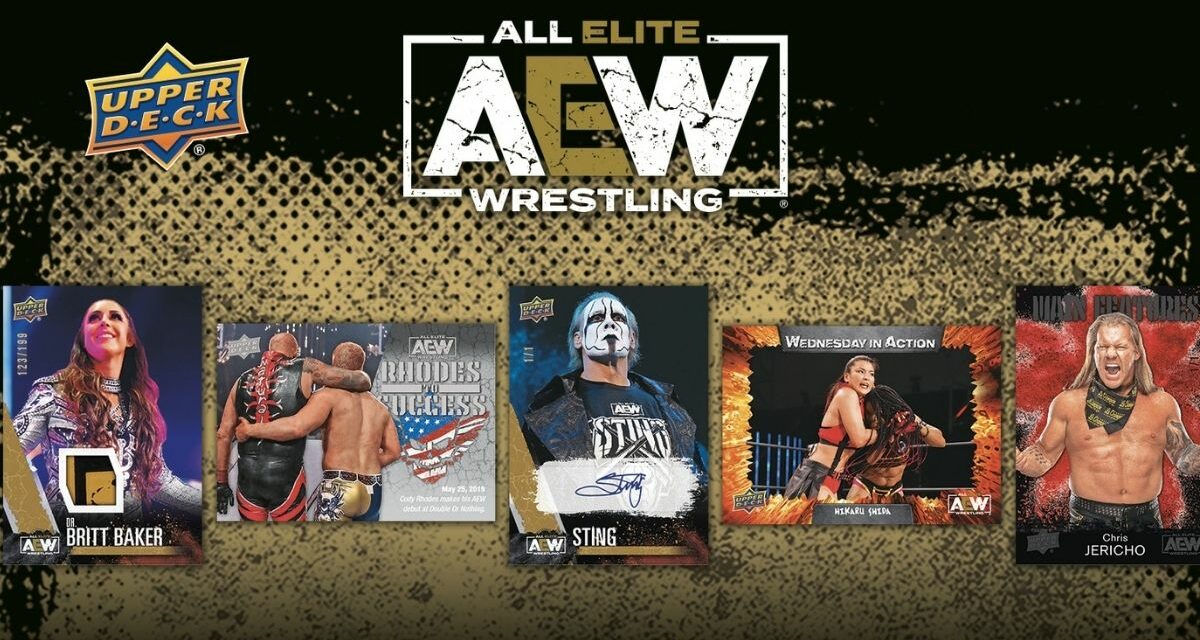 On January 7, 2022, I received two hobby boxes of the brand-new Upper Deck AEW trading cards. I pre-ordered these boxes in August of 2021, so I hung on every teaser and announcement from Upper Deck and AEW about the release of these cards until they were finally in my hands. Not only was this the inaugural trading card set for AEW but it was the first ever full release of professional wrestling trading cards from Upper Deck, so my expectations were high. It was safe to say the collective expectations of the professional wrestling trading card community, as a whole, were high.

Leading up to the official release of this “First Edition” of Upper Deck AEW trading cards, several other earlier independent professional wrestling trading card sets received a significant increase in attention, but none more so perhaps than the 2018 All In trading card set. According to WrestlingTradingCards.com, 2,500 boxed sets of All In trading cards were produced by Highspots.com. They were released ahead of the All In pay-per-view event, available through Highspots.com’s monthly subscription box, and then sold at All In merchandise stands. Although All In was promoted as a Ring of Honor (or Ring of Honor adjacent) event, it’s now nearly impossible to separate All In from the inception of AEW and its first official pay-per-view event, Double or Nothing, so many wrestling card collectors began to seek out this proto-AEW trading card set. Savvy wrestling card collectors and investors who thought ahead of the curve made a quick and easy profit, with boxes of the 36 card All In set selling in the range of $250-300, in hopes of scoring cards of some of AEW’s biggest names, such as Kenny Omega, Britt Baker, Adam Page, and MJF, each of whom made few, if any, trading card appearances up until that point, with almost nothing available on a wide scale basis.

Speculation was a driving force in the sudden increase in value of the 2018 All In set, as well as the soon to be released Upper Deck AEW, something most wrestling card collectors never had to worry much about, until now. When hobby boxes of AEW’s inaugural set went up for pre-sale, they immediately sold out. Then they reappeared at a higher price point, and once again they sold out. Again and again, hobby boxes of AEW cards kept selling out and increasing in price, until they settled between $250-275 per hobby box, which is still what you’ll find them listed for on various platforms, while the 36-card All In set still hovers around $250. 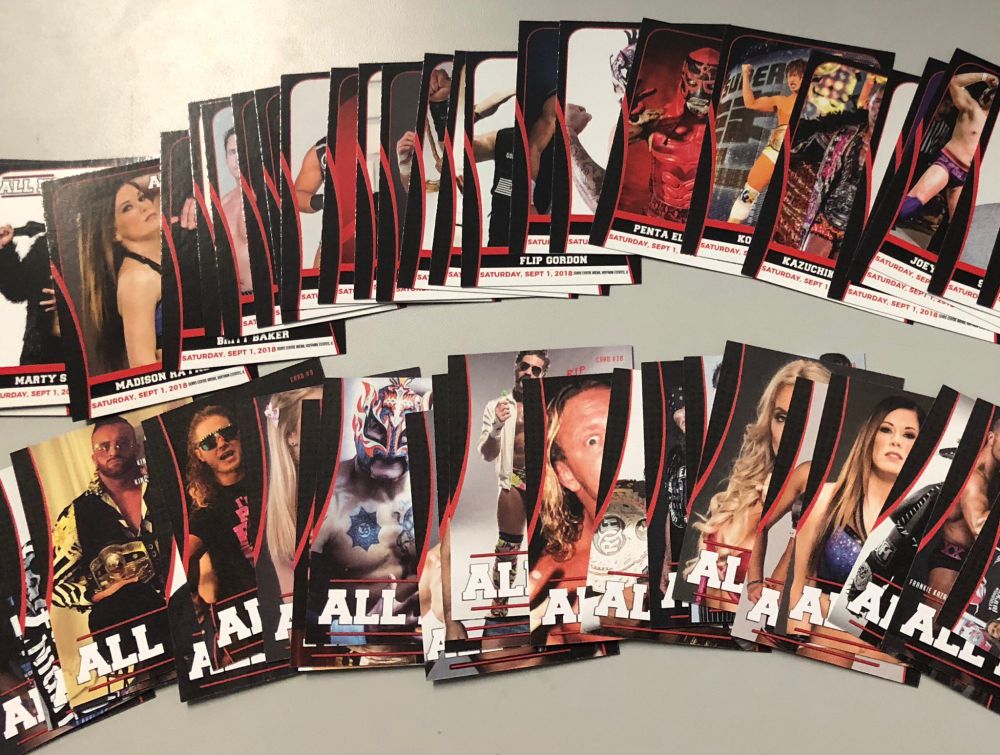 The All In set released by Highspots.com.

One of the more interesting things about the current cost of these boxes of All In and AEW cards is the lack of “hits” in each box, or the cards that promise wrestler autographs or relics (typically worn/used pieces of clothing or ring mats). Sure, Upper Deck confirmed that some boxes of AEW’s flagship product would include hits, but rather than the standard one or two guaranteed hits per hobby box, as collectors have grown accustomed, Upper Deck made no promises that there would even be one hit in each hobby box. And yet, AEW hobby boxes continued to sell.

To a collector such as myself, who doesn’t “flip” or sell their cards, the main interest wasn’t even in the hits. Sure, a guaranteed autograph is great, but I was much more interested in collecting the first ever official set of AEW cards, and so that became my primary goal, to collect the first AEW base set, and anything beyond that was a bonus (my secondary goal was to collect as many Colt Cabana cards as possible, for my personal collection). 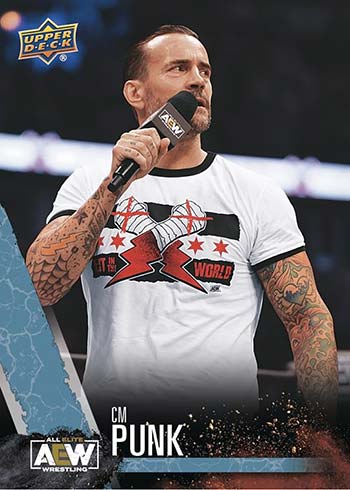 I had my two pre-ordered hobby boxes on the way, one to “rip” and one to save, but in the meanwhile, how would I satiate my craving for AEW trading cards? Well, on August 20, 2021, CM Punk made his long-awaited return to professional wrestling, and it was in an AEW ring no-less, so Upper Deck commemorated this momentous occasion by releasing an AEW trading card of CM Punk on its e-pack platform. But this first CM Punk AEW e-card wasn’t just another virtual card (like the now defunct Topps Slam) or NFT. This card would be available to print and ship at a later date (via Upper Deck’s partnership with COMC). The CM Punk e-pack card initially sold for one week for $5.99 per card, but once the window closed, the card would never be available again. Clearly, this model of selling individual digital cards, to be printed later on-demand, was a success, because Upper Deck would do it again after the surprise debuts of Adam Cole and Bryan Danielson at All Out on September 5, 2021, and more recently for Keith Lee’s debut on February 9, 2022. It was advertised that these cards would be shippable in about 8-12 weeks after they sold out on e-pack, so I had the physical copies of the CM Punk, Adam Cole, and Bryan Danielson AEW cards in my collection before I received the hobby boxes I pre-ordered, but it was getting closer to the advertised release date.

Finally, after a few delays, shortly after the start of the new year, on January 7, 2022, my 2021 Upper Deck AEW hobby boxes arrived. It felt bigger than Christmas. I knew it would be difficult to not open both boxes, but I decided beforehand that I would open one box now and save the other. I carefully sliced the shrink wrap and opened my hobby box of “First Edition” Upper Deck AEW trading cards, revealing 16 glorious packs of cards. I savored each and every pack of cards, and each and every card inside each pack. There were eight cards per pack, and 16 packs per box, so 128 cards total in each box (on average), and I didn’t receive one duplicate card in the box, so every pack held eight unique surprises, and I cherished every one of them. 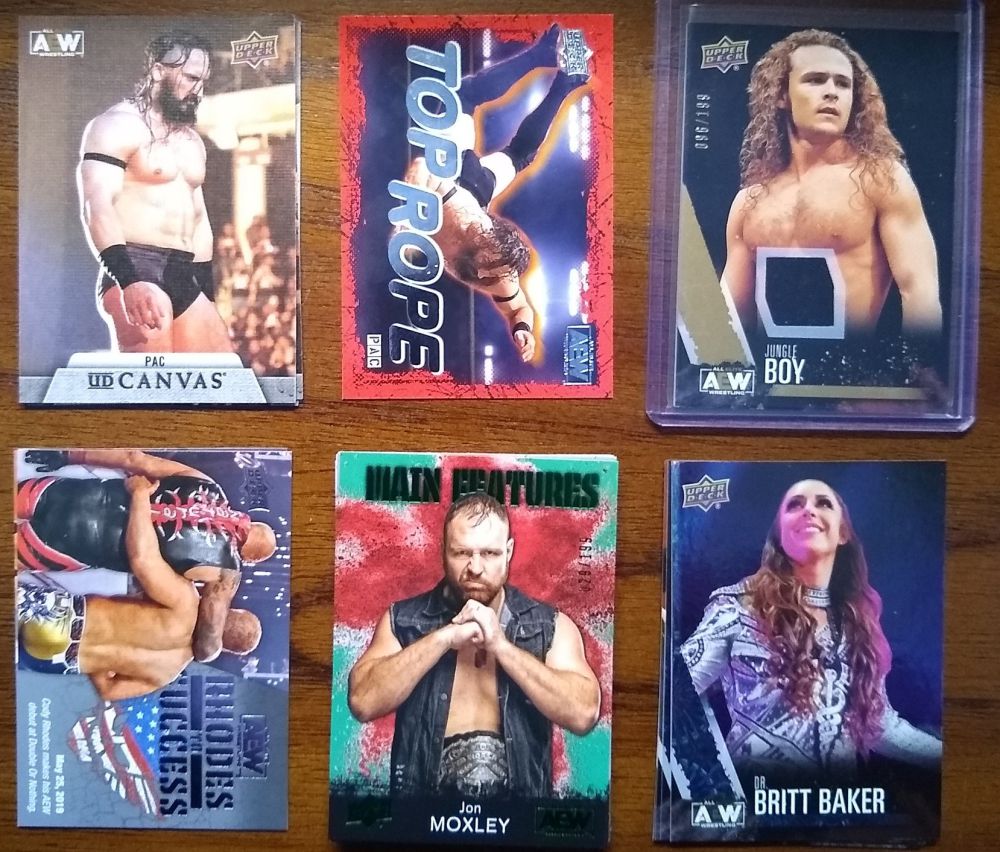 Some of Josh Olsen’s scores.

Even though there were no guaranteed hits, I did receive one Jungle Boy relic card, numbered out of 199. It was a darn good looking card, I thought, even if the relic was just a plain swatch of black cloth. Jungle Boy is one of AEW’s popular young stars, with endless potential for growth, so I was very happy with this card. The other numbered card I received was a green Jon Moxley Main Features insert card, also numbered out of 199. Both of these cards were in packs near the top of my hobby box, so the rest of the box were base or parallel and insert cards, including a somewhat rare but unnumbered Finisher parallel of Frankie Kazarian, but still, I was happy to even have base cards of a set I had been clamoring for since AEW’s first official PPV, Double or Nothing, in May 2019.

After I finished ripping my hobby box, I had a solid head start toward completing the Upper Deck AEW base set, which was comprised of 100 cards (60 individual base cards, 10 Tag Team cards, 10 Crew cards, and 20 AEW Magazine cards), but I didn’t quite have a complete set. I needed 23 more base cards from the set of 100. Not bad coverage for just one hobby box. The temptation to open my second box was challenging to resist, but I held strong, and decided I would acquire the rest of the set via additional packs of cards, or preferably by trade. 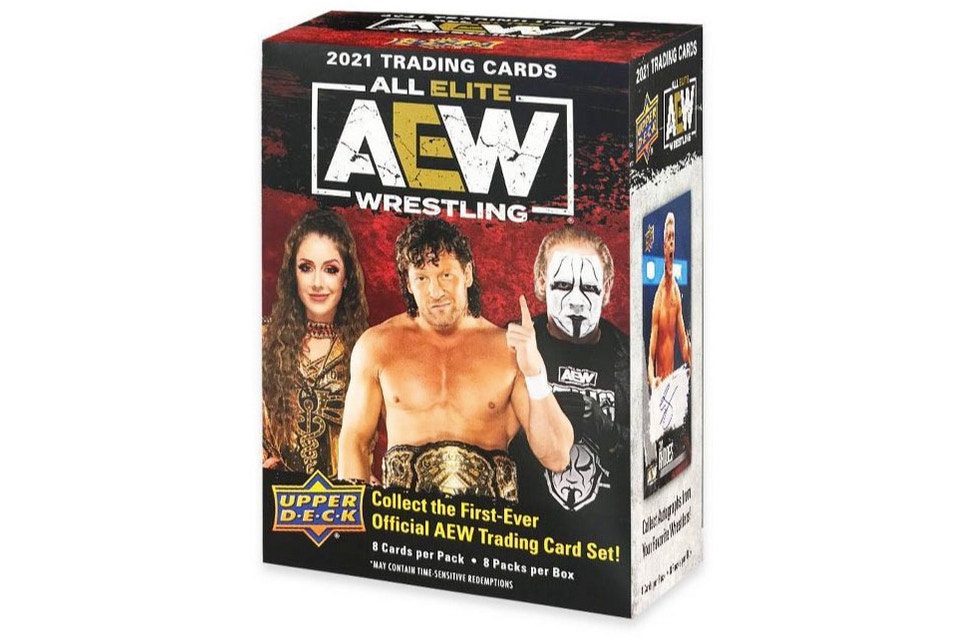 Packs weren’t exactly difficult to come by, now that people were receiving and reselling their boxes, but by now they were significantly marked up on the secondary market, and almost impossible to find at the standard retail price. Sealed packs of Upper Deck AEW cards ranged in the price of $10 per pack, if you were lucky, or more often $20 per pack. I purchased one blaster box of cards at a flea market, eight packs of cards for $40, marked up from the retail cost of $20, but still that was relatively cheap compared to what they were selling for on eBay. The blaster box filled some gaps in my base set, in addition to providing me with a relic card of Chuck Taylor, then I completed a few trades with some fellow wrestling card collectors on Twitter, and on March 12, 2022, my “First Edition” Upper Deck AEW base set was complete, organized and safely shelved along with my 2018 All In set.

Upper Deck clearly has some big plans for its relationship with AEW, and AEW has done an excellent job promoting its new trading cards, even advertising them on Dynamite and Rampage, and at New York Comic Con (resulting in free uncut sheets of cards which are no longer free).

Since the release of the inaugural set of AEW cards, Upper Deck opened pre-sales for boxes of its high-end Upper Deck AEW Spectrum product, with a current price tag of about $400 for seven cards per box, they’ve inserted packs of exclusive yellow parallel cards in recent AEW action figures, and on March 15, 2022, Upper Deck released a full set of AEW cards on e-pack, with packs of cards for $12.99, boxes for $199.99, and cases for $3,149.99 (while supplies last … and those numbers are not a misprint).

It’s an exciting time for wrestling trading cards, with so many new products on the horizon — including the new WWE deal with Panini — and the value and collectability of wrestling cards on the rise, and I can’t wait to get my hands on as many of these cards as my wallet will allow.