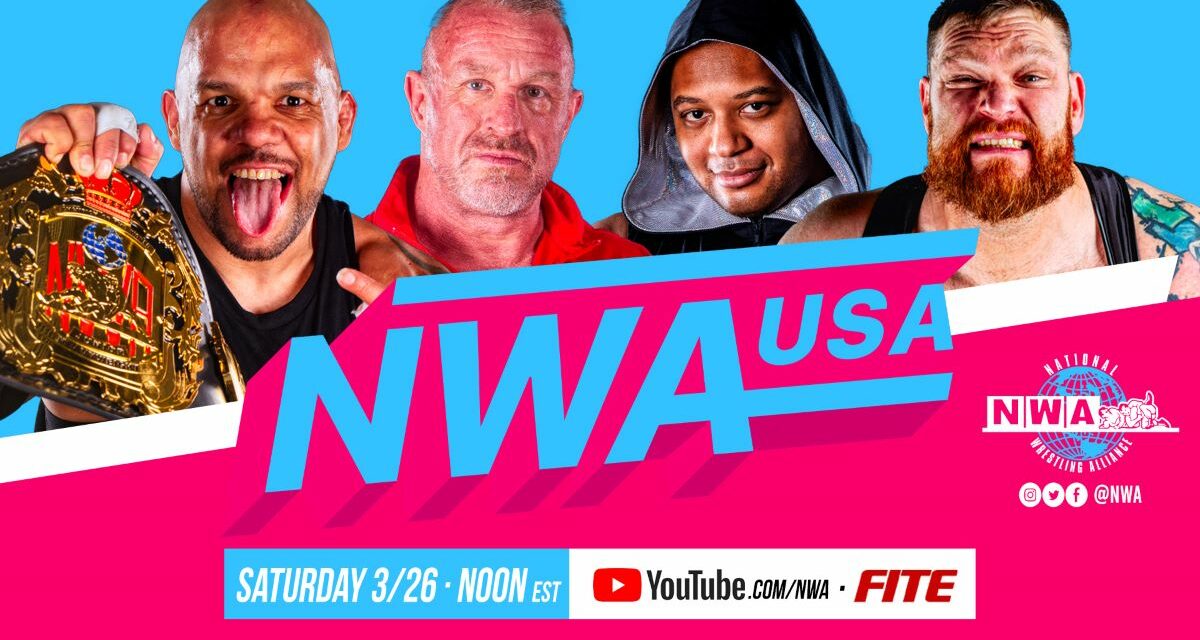 Welcome for season two of NWA USA, and the National Wrestling alliance kicks off into high gear with the newly crowned Homicide defending his belt against the Ambassador, Doug Williams.  Also, tonight will be a number one contender’s match with Jay Brady of The Fixers facing Marshe Rockett in singles action to see who will face Jax Dane for the NWA National title.  So much fun on a Saturday, I need my Sugar Smacks to get into the action.

Kyle Davis is backstage with the NWA Junior Heavyweight Champion, Homicide. The Notorious Legend says that in the NWA it’s about the Ten pounds of Gold, but tonight is about the “187 Pounds of Gold.”  No disrespect to champs of the past, but Homicide is repping the East Coast as “El Campeón del Mundo”, and he’s happy, man.

Huh.  A Happy Homicide.  Add that to the list of things I never imagined to type.  But, hey…beats a Happy Corbin.

But we head ringside at the Skyway Studios, and Joe Galli and Velvet Sky have the call.  But let’s kick off the season right with your First Match, and it’s for the… 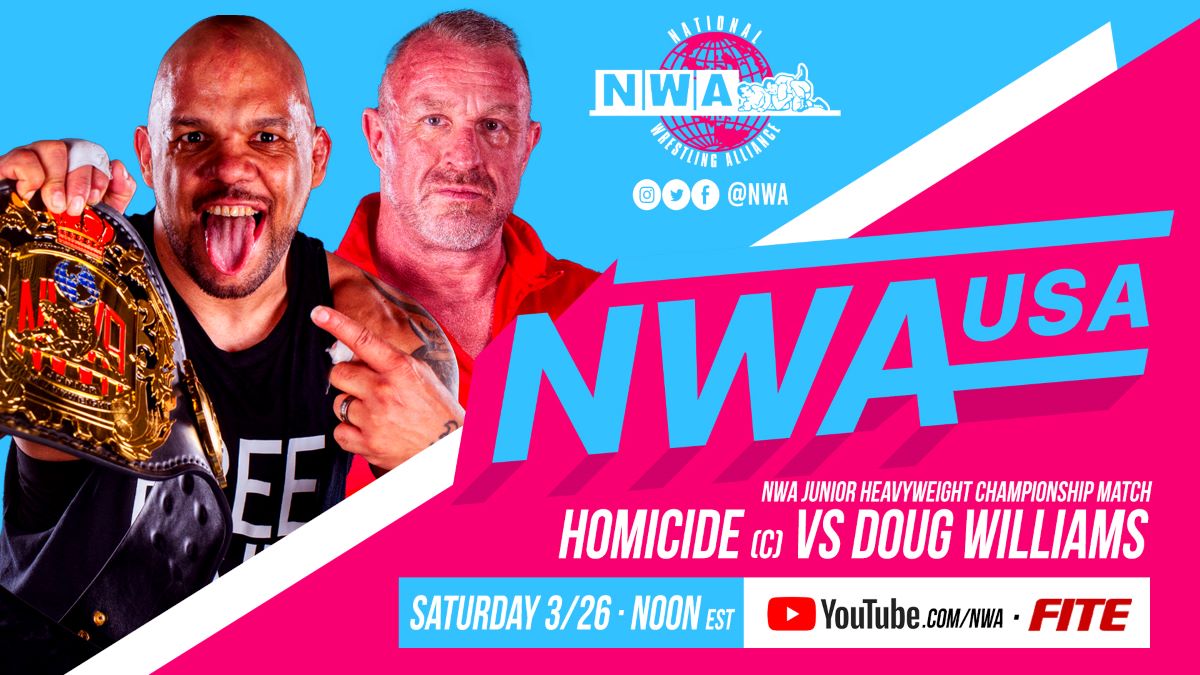 Williams is billed at 224.5 pounds, so he barely makes the weigh cutoff to challenge for the belt.  That might be a good fact to note for future challengers for the belt.

The Ambassador and The Notorious Legend touch knuckles in respect, and go hold for hold.  Williams is a savvier ring technician, but Homicide has some moves in his arsenal with a double leg takedown.  He sends Williams to the corner, and ref breaks the hold cleanly.  Homicide goes again to the corner, and bites at Williams’ ear, channeling his inner Mike Tyson.

Williams manages to turn the tide, and hits a flying European uppercut, then gets a corner splash to an exploder suplex for a two count.  Williams gets Homicide’s arms trapped in a Rings of Saturn submission, and really leans into the move, threatening to separate the champ’s shoulders.   Homicide writhes in pain, but fight through and crawls to get his foot on the ropes, breaking the submission.  From there, its European uppercuts and haymakers between the two combatants.  Williams attempts his Chaos Theory finisher, but Homicide gets tag rope from the top turnbuckle to hang on, and then he hits the Koji Cutter for a two count. Now, Homicide delivers what Galli calls the Northeast Bomb (which I would classify as a modified jackhammer/brain buster) and it’s academic from there.

Your Winner via Pinfall:  Homicide

Next is a promo by…Caprice Coleman.  This was too good, so I’ll let Mr. Coleman speak for himself:

“My name is Caprice Coleman.  I’ve been part of this sport for twenty-seven years, honing my craft looking at things and then helping others become who they are.

I began to look in the mirror and realize that the things that I’ve been teaching people, not only am I able to retain; I’m able to do at a very high level.

I’m Caprice Coleman: I have a rookie body, a veteran mind, a silver tongue. I’m the Ageless One.   I’m the show stoppin’, crowd poppin’, body rockin’, pulse pounding, heart racer; The Handsome Face Heartbreaker.  I’m the man of the style, the grace, the shape, and the face.  I am the innovator, crowd motivator, commentator complicater, [and] guess what? I’m more devastating than the Space Modulator.

People look at me, and say ‘Caprice doesn’t age.” Can you imagine a man that is able to do what he was able to do years ago, with the mindset that I have? The NWA has welcomed me here. Now I’m home. I’ve watched you since I grew up, and now it’s time for me to change the game.”

Note to Self:  Look to copyright “National Wrestling Alliance of Honor.”  Also, check out what we wrote about Caprice Coleman here.

There is big pop for the Bristol, TN native Morton from the home crowd, and Sky definitely taken in by “The Latin Lover.”  Of course, Morton takes Aguilar to school, and has a nice ten count vertical suplex before dropping him to the mat.  Aguilar manages some offense with a boot to a sunset flip to a pin, but it’s only for two count.  Morton gets a discus forearm to the back of Aguliar’s neck, and nails his “Kiss it, Goodbye” knee strike finisher, and it’s adios, amigo.

May Valentine is with Jax Dane, and she inquires of the National champ about how he feels about the upcoming number one match. Dane himself is curious what Rockett and Bradley have done to earn a shot, and thinks it’s part of the “Corgan Conspiracy” to take the belt off him.  Simply put, neither man are on his level, and the Dane Event thinks they don’t deserve the opportunity.

Galli plugs La Rebelión tag title defense next week for NWA POWERRR, and Caprice Coleman will make his debut.  Also we’ll see The Cardonas (correction:  “The C-Word”, according to Velvet Sky) in action, and I’m making a note to put that in my recap next week, if only to see how people will react.

But let’s get to the Main Event, and it is a… 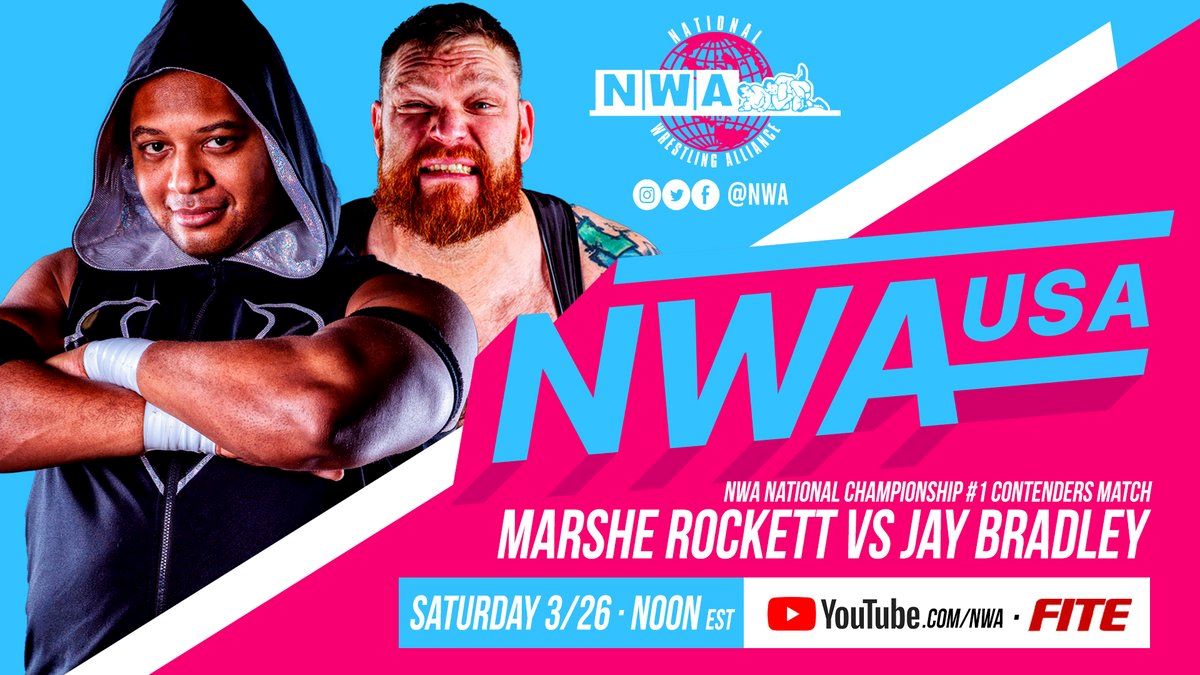 I’ve said it before, and I’ll say it again:  heel versus heel matches just don’t work for me, but for today…I’m a Fixer guy.

Bradley is firmly in the driver’s seat against the IdolMania Sport’s Entertainment member, in conjunction with The Church’s Money, Inc. (which is a longer sentence than what took place in the ring.  The Fixer gets Rockett down with a shoulder tackle to a waist lock, then to a nasty looking backbreaker that looked really painful for Rockett.  Bradley goes for the pin, but it’s for a two count.

There’s a small “Let’s Go Fix-ers!” chant going (so I guess it’s not just me going Team Fixer), and Rockett tries to get some offense in, but not for long as Bradley delivers a diving head butt for another two count.  Bradley slams Rockett in the corner, and blows a kiss to Sky saying “this is for you!”  Methinks someone is a bit sweet on getting some Velvet Time (but I digress).  He goes for the Vader Bomb, but Rockett gets up and send him down hard to the mat, and mounts with punches, and a splash to the corner turnbuckles.  However, Bradley “fixes” the problem (pardon the pun), and gets Rockett down with a modified uranage slam to a pin cover.  BLK Jeez gets Rockett’s foot on the rope to break the count, but the ref saw all of it, and yells at Jeez, who’s playing dumb. Now, Bradley gets in the refs face, as does Jeez, and ref calls the bell because, as announced by Kyle Davis at ringside…

Fans are booing the decision, and “Wrecking Ball” Legurtsky comes out to console his Fixer partner, as a contender for the NWA National championship is in doubt, as the show goes to credits.

This season of NWA USA is starting strong, and if the Homicide/Williams bout, and Kerry Morton match are any indication, the Junior Heavyweight division is one fans will need to keep a close eye on.

As for the National title picture, while the ending is not as satisfactory, it does set a foundation for other challengers that could try to unseat Jax Dane, as he channels his inner Power of Douchenozzleery ™ to hang on to the belt.

I can’t wait for next week, as we see you in seven!