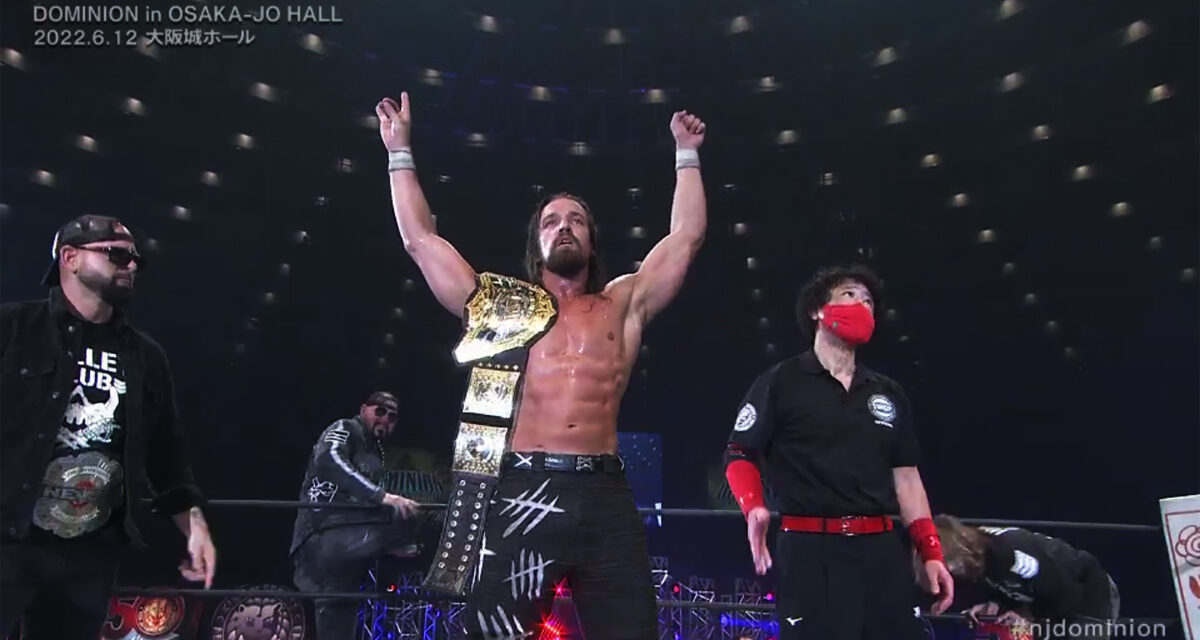 “Don’t you worry. Just relax,” White says to Gedo and the official.

Okada taunts White in the ropes. A ticked off White fires back with kicks and chops. A drop kick sends White to the edge of the ring and the floor. Okada bounces off the ropes to gain some steam. Gedo trips him up from the floor. 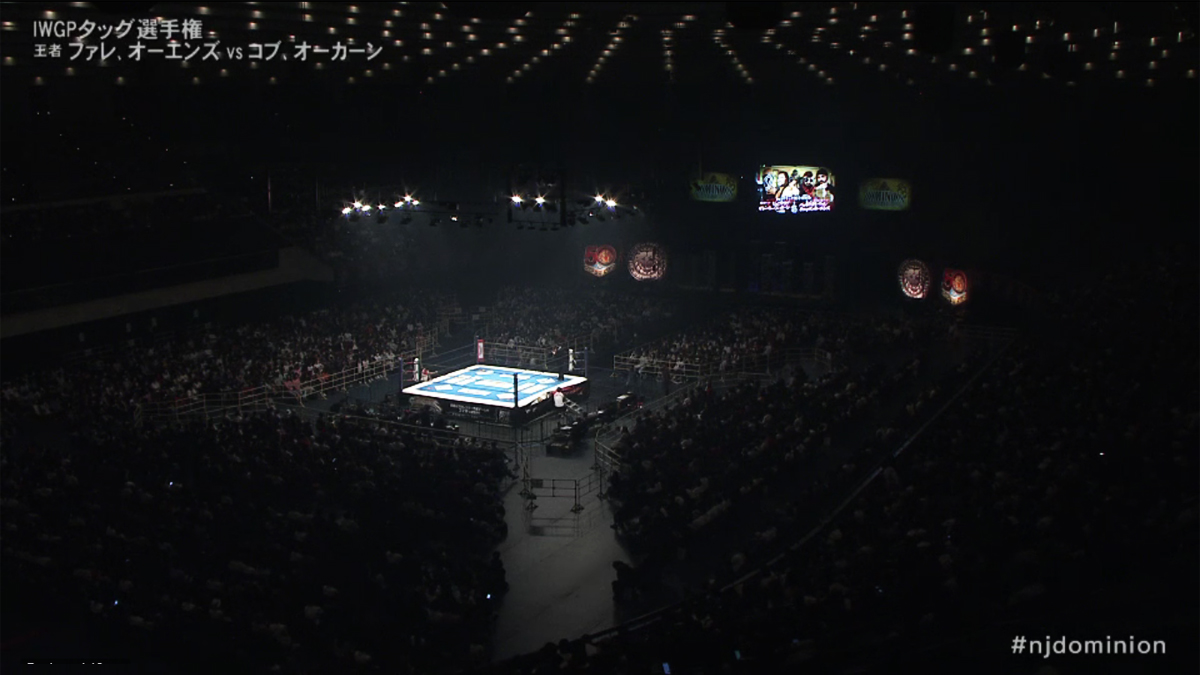 The fans are ready for action in Osaka-Jo Hall in Japan. Courtesy: NJPW.

White demands the crowd break Japan’s COVID policy and chant for Okada. They refuse to do so, clapping his name instead. This angers White who throws Okada into the ring barricade.

White unwraps the ring apron, drapes it over Okada’s face choking him out.

“Say his name!” shouts White to the Okada Joe crowd who ignores his demands.

White asks Red Shoes to put the apron back on. When he doesn’t White does it himself.

Okada cannot seem to get out of the blocks but he finally fires back with a haymaker to White’s face and a big boot. A speedy running elbow mows White over. Okada gets a one count with a DDT. White rolls out of the ring after being slammed with a flapjack. 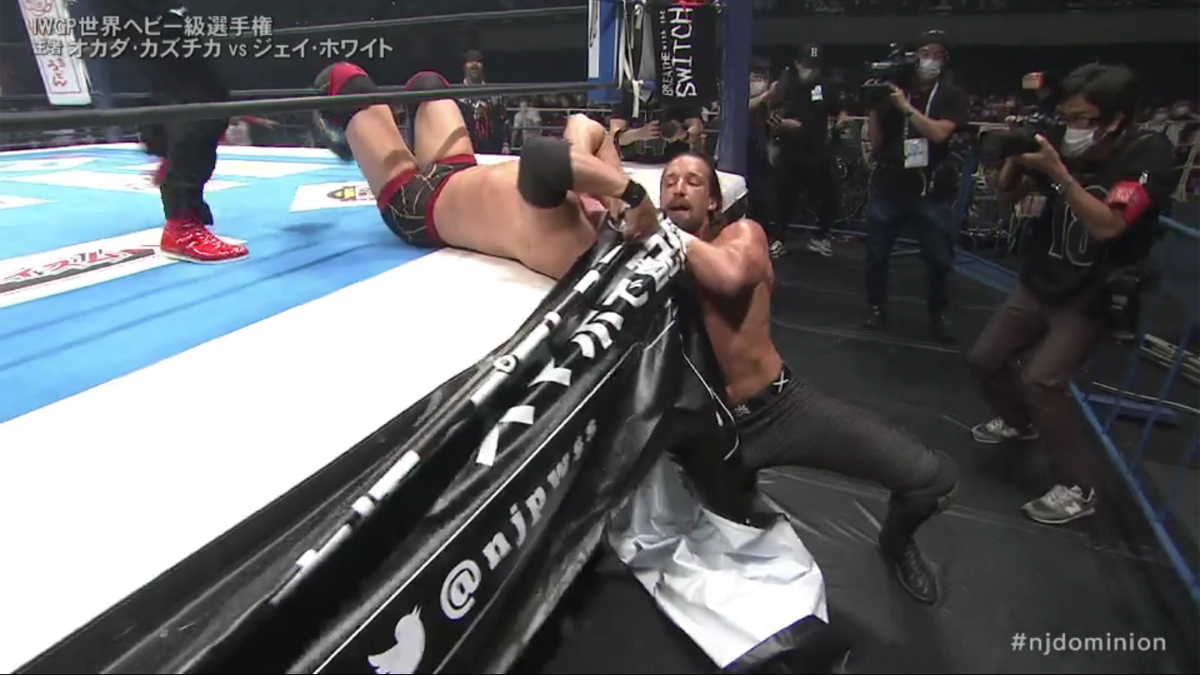 Okada launches White into a barricade kicking him over it with a running boot. Gedo attacks Okada from behind. Okada responds with a shot to the jaw. Okada throws Gedo over the barrier so that he joins White in the first row.

Okada leaps over the barricade crashing into both White and Gedo wiping them out.

White devastates Okada with a snap suplex into the ringside barricade. Okada slips back into the ring at 18. White gets a two count with a his Blade Buster.

Okada and White get into a slugfest in the middle of the ring. Okada grabs White’s arm to lift him back to his feet. White refuses to let him do so. Okada kicks and stomps him. A sleeper suplex slows Okada and a Regal-plex almost pins him.

White took to the microphone after the match to address AEW’s ‘Hangman’ Adam Page.

“You want Okada? You can have him because you ain’t f—–g getting this! You dumb, cowboy bitch!” he said showing off his newly-won IWGP World Heavyweight Championship.

Professional boxer Jessie Vargas accompanies The United Empire to the ring. Manabu Nakanishi is with the faces. Aaron Henare gives Taguchi some combination shots in a corner as Vargas coaches him from the floor. Henare makes Tenzan submit with his new full nelson move. The bell rings and rings while Henare refuses to release the hold.

El Phantasmo comes out with Alex Zayne’s socks. He stole them during the BOSJ tournament. “Who steals socks?” askes a bewildered Kevin Kelly. Naito is fascinated by Austin’s collapsing staff. He and the rest of Los Ingobernables try to puzzle it out. Bullet Club has had enough of the shenanigans and attack before the bell even rings.

Austin splashes Naito and Takahashi on the floor while El Phantasmo hits CR2 on Bushi in the ring. 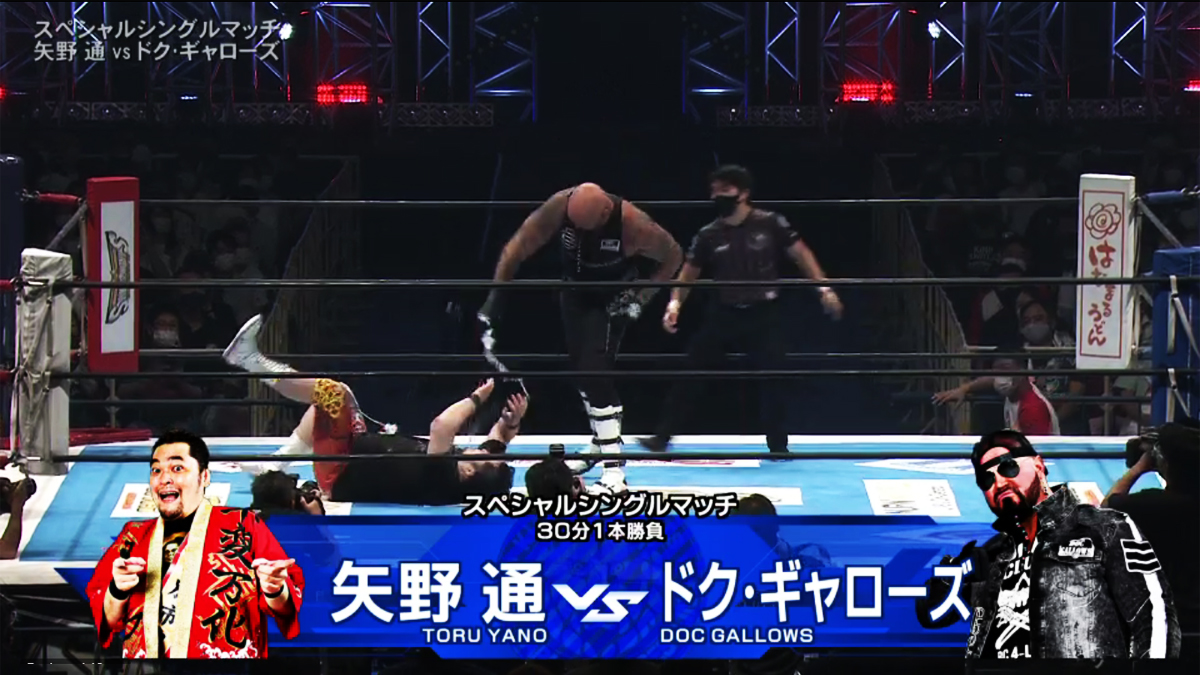 Doc Gallows has had enough of Yano’s nonsense. Courtesy: NJPW.

Gallows requested this match because Yano sprayed him with his sanitizer the last time they met. Before their match begins Yano sprays it again all around the ring angering Gallows. Spraying it in Gallows’ face is the last straw. Gallows beats Yano down. Gallows opens the bottle pouring it all over Yano. Yano attempts to escape under the ring. Gallows pulls him back out and slugs him one. Yano removes a turnbuckle pad. Gallows crashes into the exposed steel. Yano kicks out of a chokeslam. Yano grabs the official, mule kicks Gallows in the “lower abdomen” and rolls him up for a pin. Yano runs out of the ring and into the back. Gallows fumes in the ring. 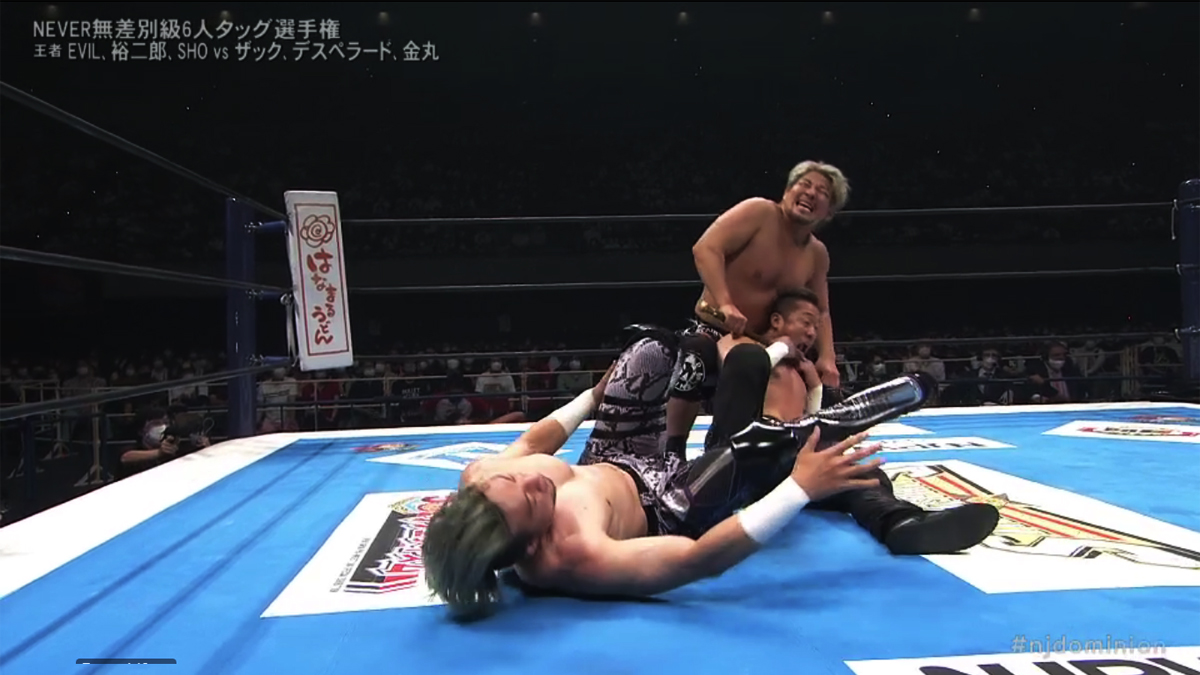 The House of Torture is up to their old tricks. Courtesy: NJPW.

Suzuki-gun clobbers House of Torture from behind as they make their entrance. The match ends up being a clever who can outcheat the other team. ZSJ catches Togo attempting to hand Sho his wrench. ZSJ puts Tog in an armlock making him pay dearly for that. Kanemaru has Sho in the figure four. Evil distracts the official. Yujiro chokes Kanemaru with his cane. Togo takes a swig from Kanemaru’s whiskey bottle. Kanemaru kicks Togo in the stomach. Togo spits whiskey everywhere. Sho has loaded his boot with his wrench. Sho kicks Kanemaru twice with the wrench and pins him with Shock Arrow. 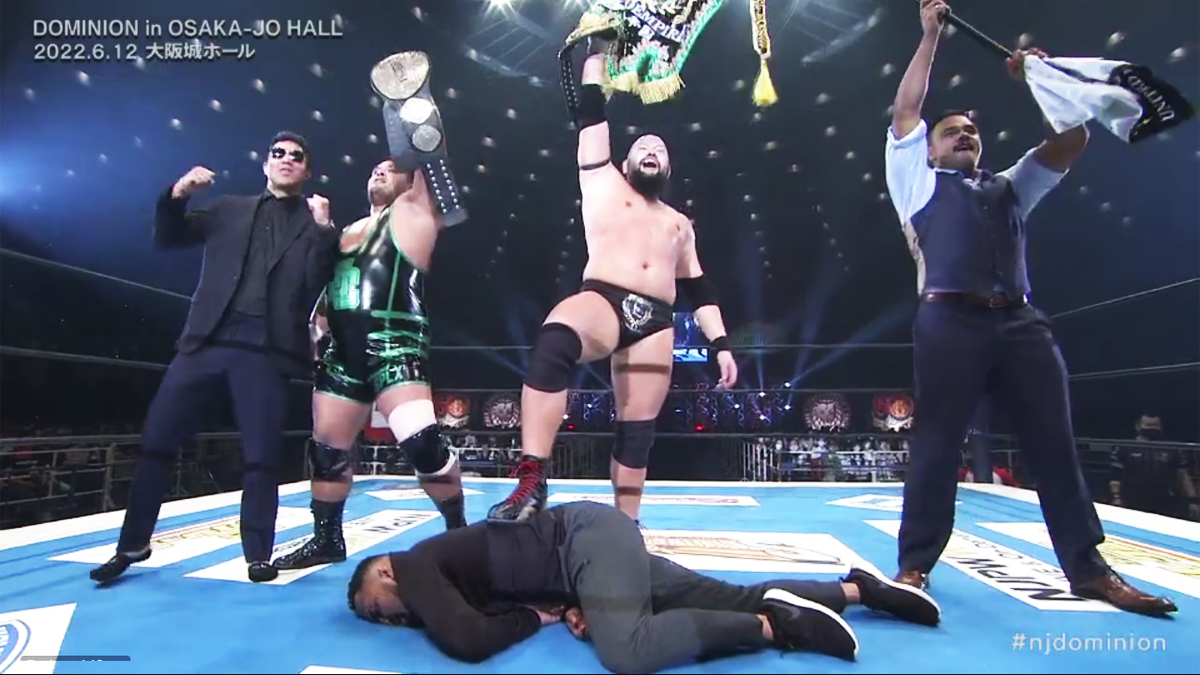 Khan clotheslines Fale right over the top rope. He then suplexes Owens off the top rope. Cobb puts Owens away with Tour of the Islands. As The United Empire celebrates, Rocky Romero attacks dishing out some payback for what happened on AEW Dynamite. Empire takes him out blasting him with a tag belt in the head. Khan slams him down with an Eliminator. Cobb, Khan, Vargas and Henare stand over a fallen Romero.

The winner of this match will face Jon Moxley at the Forbidden Door pay-per-view for the Interim AEW World Championship. No surprise that Goto gets burned here. He always does in NJPW. Tanhashi wins with a Slingblade, Aces High and a High Fly Flow. 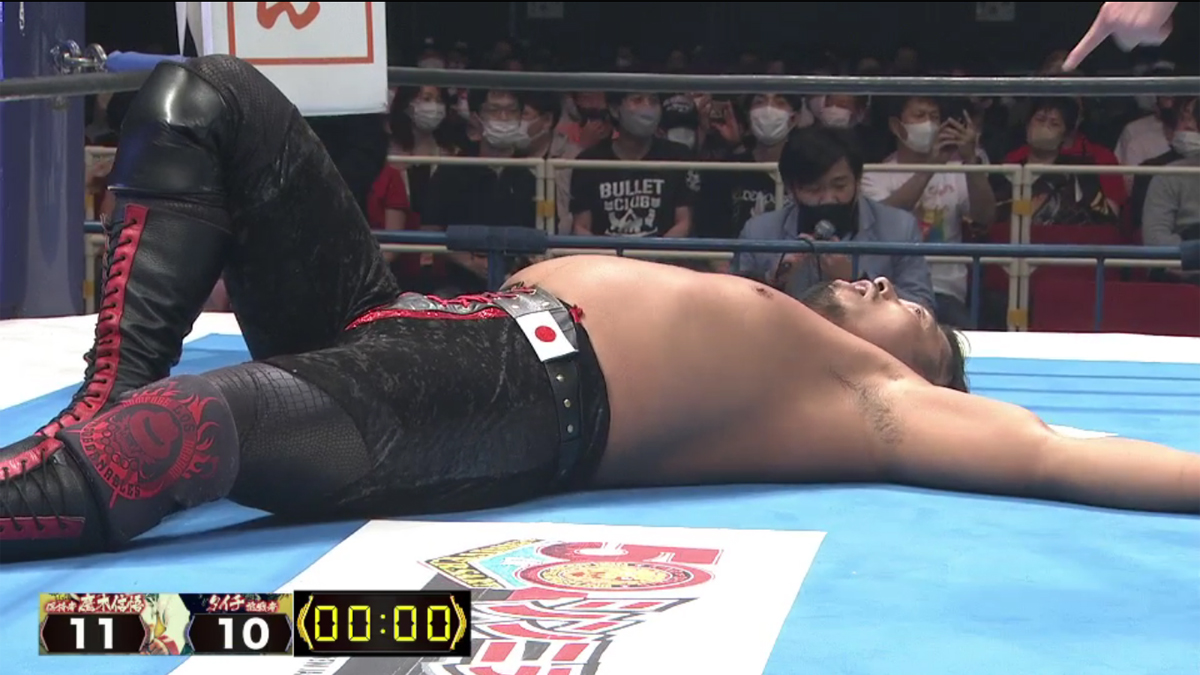 Shingo racks up enough points for a win. Courtesy: NJPW.

As per the stipulation, this match is who has the highest total count on their pinfall attempts at the end of 10 minutes. It is not nearly as good as their previous match under the same kind of rules. Takagi outscores Taichi. 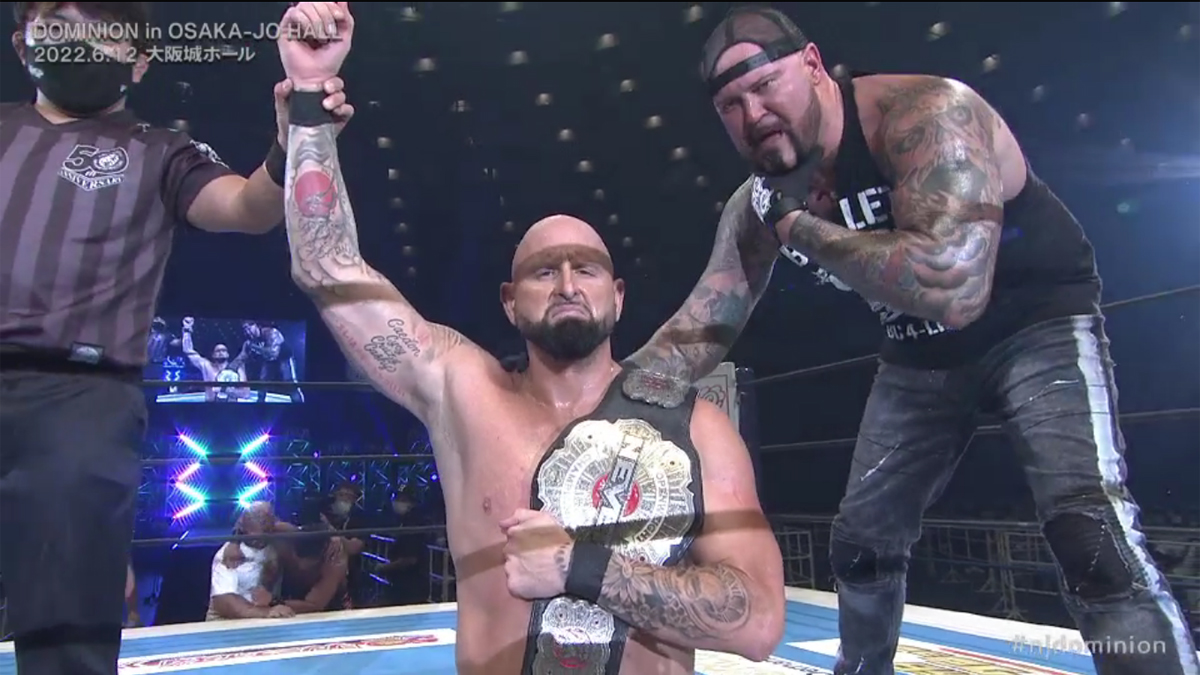 The Machine Gun is your new champion. Courtesy: NJPW.

The battle goes to the rampway where Anderson slams Tonga on it. Anderson goes for a Gun Stun on the ramp. Tonga punches him off  of it. Anderson falls hitting the steel barricade. Tonga slings Anderson with a snap suplex on the concrete floor. Gallows distracts Tonga so that Anderson can give him a Gun Stun over the top rope. Anderson now distracts the official so that Gallows can chokeslam Tonga on the apron of the ring. When Jado complains, Gallows punches him in the face. Anderson kicks Tonga off the apron. The ringside barrier breaks Tonga’s fall.

Anderson kicks out of the Supreme Flow at two. Gallows interferes. He gets Gun Stunned for his troubles. Anderson Gun Stuns Tonga.

Ospreay claims the vacant title with a Hidden Blade and Storm Breaker.

Now this is more like it. NJPW finally stops giving us so many darn tag team bouts and we have a card dominated by a bunch of strong singles matches. Great wrestling, smart title changes and angles setting up a strong summer for NJPW. One of the best, most consistent events of the 2022 wrestling year.