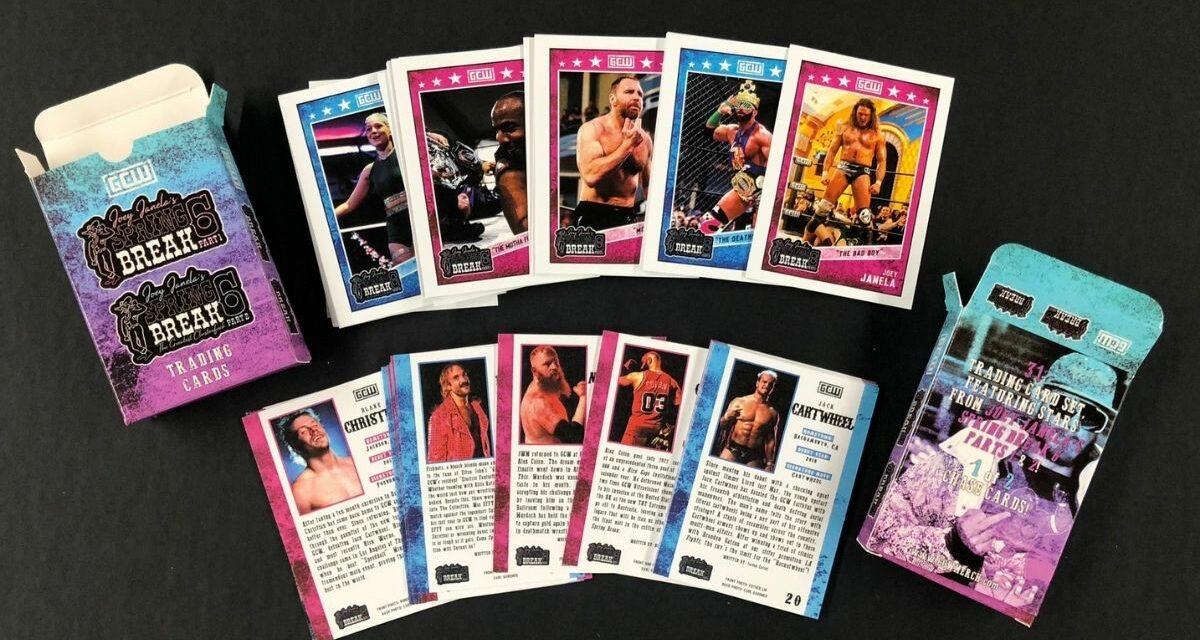 The 2020 GCW Spring Break sets are the first time the two-box set was split between Joey Janela’s Spring Break and The Collective, GCW’s cornucopia of live wrestling events that include For the Culture, Josh Barnett’s Bloodsport, and Effy’s Big Gay Brunch, among numerous others. Due to COVID-19 restrictions, Spring Break and The Collective took place in October 2020, instead of the typical spring date, which meant the card sets were also released in October 2020. Thanks in part to “rookie” card appearances by Penelope Ford (Gigi Dolan) and Lee Moriarty, the 2020 GCW Spring Break/Collective sets have also become quite collectible, and the once $20-30 card sets now sell for $100-150 per 31-card box. The 2020 sets were also the first Spring Break/Collective sets to include a chase card in each box. For example, the 2020 GCW Collective box includes either the first post-WWE trading card appearance of Jon Moxley, who wrestled that year against Chris Dickinson at Josh Barnett’s Bloodsport, or Effy’s dog Cranberry.

Being that the 2021 GCW Spring Break/Collective event(s) resumed in April of 2021, there was half as much time between the events, and half as much time between the 2020 and 2021 trading card sets. Once again, GCW sold these sets in two boxes, under the brand of The Collective Remix Volumes 1 and 2. According to WrestlingTradingCards.com, only 210 sets of The Collective Remix were created, and so scarcity has increased value, so if you didn’t purchase a box when they were available directly from GCW, you can expect to now pay at least $100 per 31-card box.

It might be easy to say that when the 2021 GCW Collective events took place in Tampa, Florida, in April of 2021, GCW owner Brett Lauderdale and company were seeing some of its greatest successes since the start of the organization, but when it came time for its 2022 Spring Break/Collective events, in Dallas, Texas, one might say that GCW was arguably the third most popular wrestling company — especially in terms of hype — in the United States (behind WWE and AEW), which means that GCW fans were eagerly anticipating the release of the 2022 Spring Break and Collective trading card sets, and over WrestleMania weekend, in Dallas, Texas, independent wrestling card fans and collectors got exactly what they wanted.

Once again, GCW released the 2022 Spring Break/Collective sets in two separate 31-card boxes, at first at the live events in Dallas, and later on its website. Each box sold for $30 apiece, or $50 for both boxes. At the time of this writing, sets are still available from the GCW Merch website, along with a limited number of single autographed trading cards, but based upon the sales of previous sets, these will likely be sold out soon. I ordered one of each box, and on April 16, 2022, the cards were delivered to my house, and I didn’t wait long to cut the shrink wrap and open my boxes. Sight unseen, this was a set of cards I knew I was going to buy the moment they went on sale, so I had intentionally avoided details about the design and checklist, and I’m glad that I did, because I was able to enjoy the surprise of opening the boxes and laying my eyes on the 2022 Spring Break and Collective sets.

The first box I opened was the Spring Break box, so the first card I saw was that of Joey Janela, creator and namesake of GCW’s Spring Break, its marquee event of the year. The design and theme of this set is relatively simple. Wrestlers who appeared on Part 1 of Spring Break have a pink design and Part 2 are blue, and all of the cards are framed within a white border. An added touch to each card is the inclusion of their nickname, for example “The Bad Boy” Joey Janela. The front image of each card is typically an action shot from inside the ring, and the image on the back is usually posed.

One of the more admirable qualities of GCW card sets is their inclusion of photographer credits on the back of every card, so it’s possible for GCW fans and collectors to become familiar with and have favorite photographers, as well as favorite wrestlers. In addition to this, the creation of each set of GCW cards is credited to Brian Ubben (@BrianDaBrain), so there’s a level of transparency and acknowledgement in GCW trading cards that you just don’t see in mainstream trading cards.

The Spring Break set is loaded with a balance of veterans, guest appearances, and up-and-coming independent wrestlers, including the first GCW trading card appearance of “The Deathmatch King” Matt Cardona (who is in the midst of a career year), X-Pac (who wrestled Joey Janela at Spring Break), and the 16-year-old wrestling prodigy Nick Wayne, who had an AEW contract hand-delivered to him by Darby Allin and is already touted by wrestling card prospectors as the card to own. The 2022 Spring Break set also includes Minoru Suzuki, GCW tag team champions Allie Katch and Effy (known collectively as BUSSY), GCW World Champion Jon Moxley, and GCW Extreme Champion AJ Gray, to name some highlights, so if you’re looking for a set that includes most of the regular GCW roster, the 2022 Spring Break set is the closest GCW comes to a flagship set of trading cards. 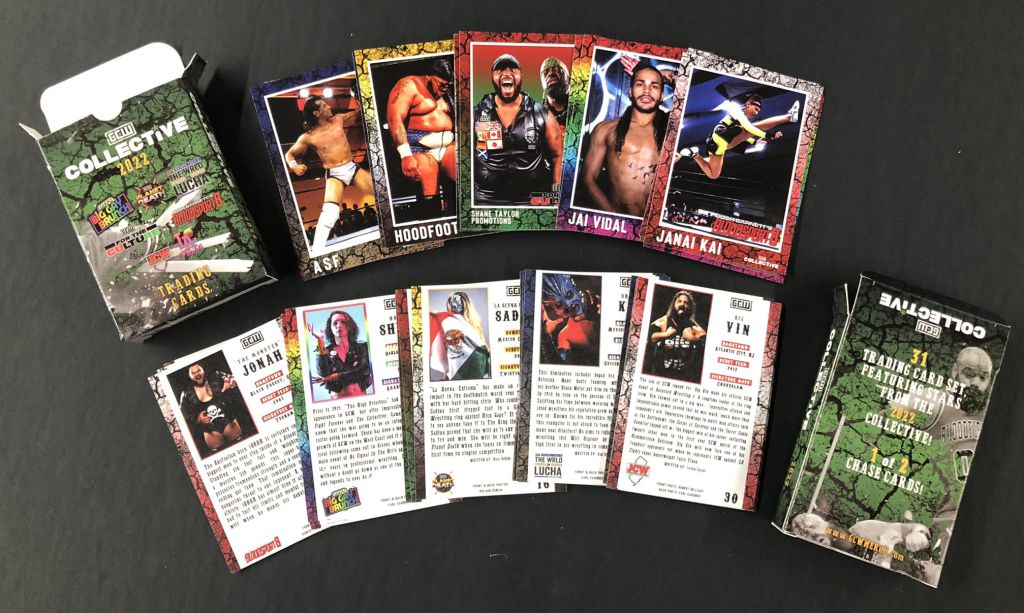 The Collective set is typically where GCW gets more creative and takes more risks with its card design, and in the past, it has used the Collective set to distinguish between different shows by allowing each subset to have its own unique card design — for example, I think the 2020 Big Gay Brunch subset is perhaps the most artistic and beautiful card design ever created — but I think the 2022 set is one of the more conventional looking GCW Collective trading card sets GCW has produced. All of these cards have the same card back as the Spring Break set, and the design on the front is only slightly different. The border of each card resembles a barbed-wire-esque design, and depending on the individual show highlighted, the color palate is different. For example, Bloodsport cards have a black and red gradient border, Effy’s Big Gay Brunch has a rainbow gradient border, and For the Culture has a red and green gradient border.

One improvement, though, is the image on the front of the 2022 Collective cards is noticeably bigger than the Spring Break cards, due to the Spring Break cards having somewhat of a double border. Another reliably great thing about cards from the Collective set is its inclusion of wrestlers who may otherwise be excluded from trading card markets, so this is where we find trading cards of talent like Hoodfoot, Dark Sheik, Bill Dixon, and Pimpinela Escarlata. The Collective set is like the extended set to Spring Break’s flagship set, so while it may not include cards of GCW’s champions, it’s an essential purchase if you want a more complete collection of GCW’s expansive roster.

Overall, the 2022 GCW Spring Break and Collective sets are the most professional looking trading card sets GCW has ever created, and while the Collective subsets may not be as creatively risky as they have been in previous years, there’s a level of overall consistency and quality in this product that is rarely seen in independent wrestling cards, and GCW has taken a big step forward in the ever-growing professional wrestling trading card market. One of the chase cards in the 2022 Spring Break set features the quote, “I’ve seen a million GCW’s come and go … it’ll never last,” which Lauderdale used as a rallying cry leading up to The WRLD on GCW at the Hammerstein Ballroom in January 2022, and if this year’s Spring Break and Collective trading card sets are any indication, GCW is only getting started, and I look forward to collecting GCW trading cards for years to come.