NWA USA: A Gimpy episode that leads to a Dane Event 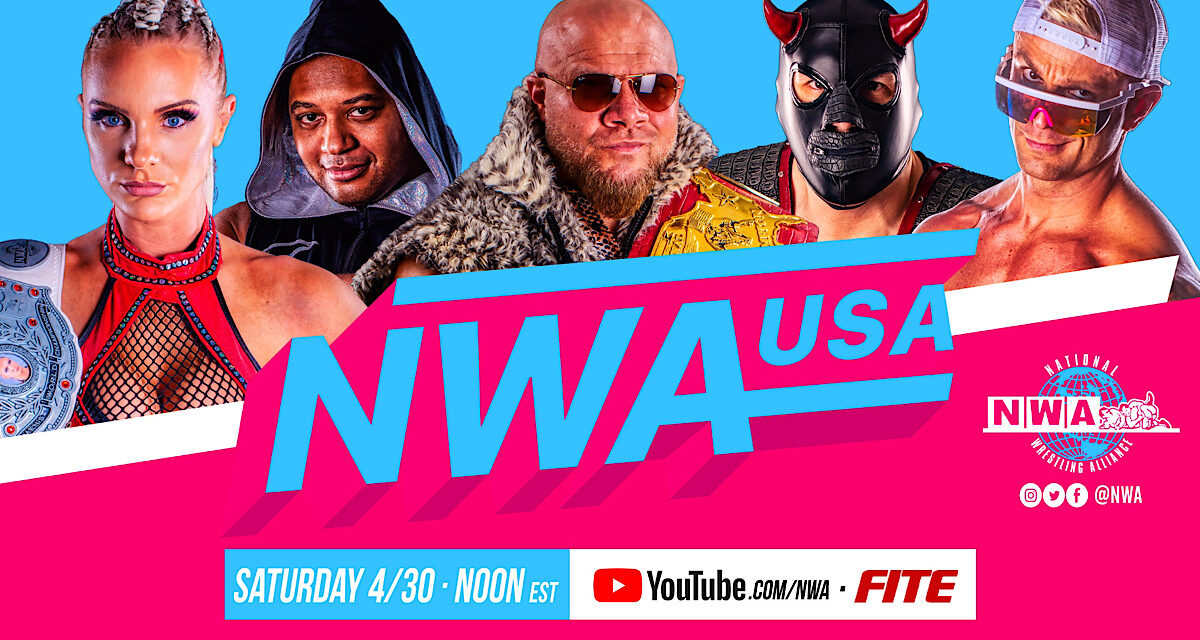 On the latest NWA USA, Marshe Rockett looks to step up to Jax Dane to claim the NWA National title. But, The self proclaimed Dane Event is doing what he can to retain the title on the Saturday show.  With that and Kamille in action along with jawlines, Roxx, and Gymps (oh, my!), the National Wrestling Alliance has quite the potpourri of professional wrestling this episode.

We kick off with May Valentine talking to BLK Jeez, and he says that Rockett is getting the shot at the title and that’s all that matters. He will be the next National champion, if ya feel him.

We go to the Skyway Studios with Joe Galli and Velvet Sky have the call. And it time for the First Match of the night, and it’s a non-title match between…

As The Brickhouse enters Alexis has…a hula hoop? Ok, then.

That leads to Ads for the Matt Cardona themed Alwayz Ready PPV coming up in June 11th this year.

We go back to the action, and I’m getting a whiff of the squash coming from this match as Alexis whips The Kamille with the hoop, and thus we have the beginnings of a one-sided match. Kamille gets a steamroller and a spear, and thanks for playing Alexis.

Your Winner via Pinfall: Kamille

Your Spotlight Shoot in Sixty Seconds™ comes to your courtesy of Big Strong Mims:

“Big Strong Mims. Actually, let me…let me take that back. I have a saying. I like to say you got to work your ass off until there’s no ass left. #noassleft. So I’m not just Big Strong Mims. I’m Big Ass, Strong Ass Mims…without the ‘Ass’ On the end. And you know what? I’m a guy that loves competition. I’m a guy that loves opportunity, and I’m a guy that loves to adapt to adversity. And that’s what I do here in the NWA. I’ve had some of the biggest, strongest opponents you can throw at me. I’ve always I’ve always come out on top in some sort of way. I found my way back to the top. I found my way to beat that adversity. That’s just who I am. Adaptability…but that just doesn’t sound right with ‘Big Strong Adaptable Mims. So it’s just Big Strong Mims… but with no ass.”

And now for something gympy, here’s… 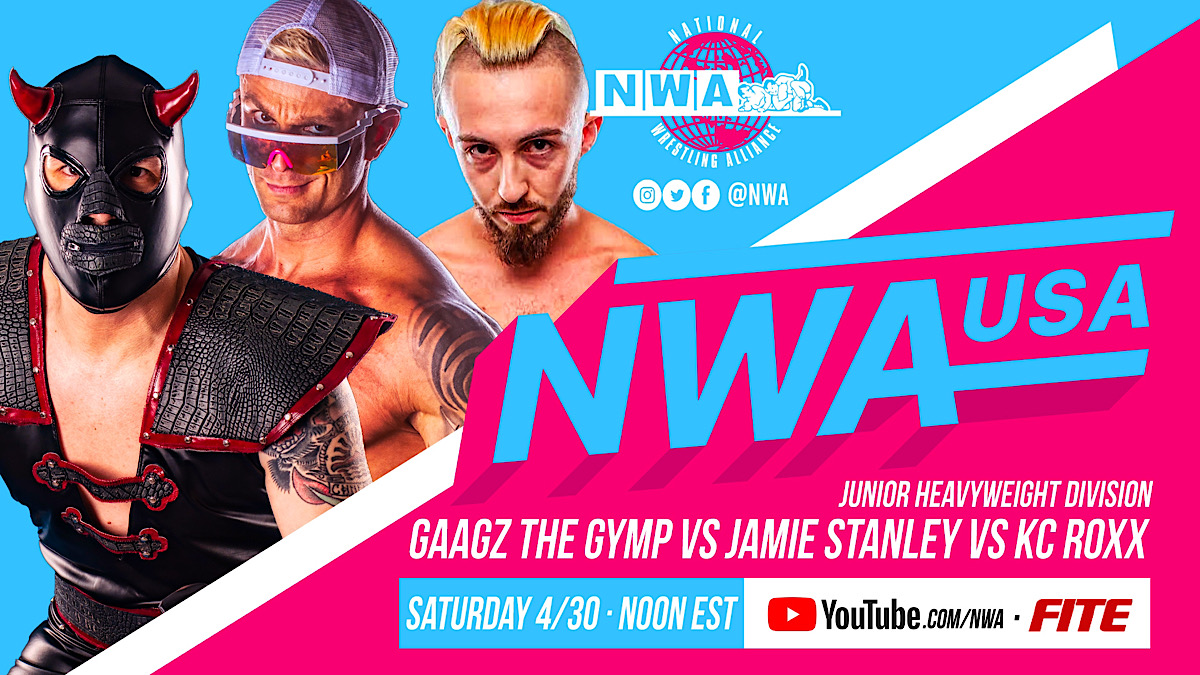 There are big cheers for the Gymp, and again I cannot make any of this stuff up. Roxx makes his in-ring debut after being a practice dummer with Aaron Stevens’ wrestling clinic

The bell rings, and Stanley order the Gymp to kneel and he pushes Roxx down with Gymp tripping him up. Stanley then stomps the Gymp, but he comes back with unorthodox moves to cause as much pain to America’s Jawline. Stanley goes for a cocky pin to Roxx, but Gymp chokes him from behind. Roxx rallies back, but eats a flatliner by a Stanley, and Gymp comes back in to ring and sends Stanley to the outside. He grabs Roxx and gets a reverse DDT (eh I’m calling it a Gymp Drop) and the Miserably Faithful member gets the win.

I have no words.

May Valentine is backstage with Colby Corino, and she asks why he’s afraid to face Kerry Morton. He doesn’t want to hurt the kid, but Ricky Morton can have a shot at him…if he faces one of the Fixers. Since The Rock on Roll Express member is old school, he offer a chance to face either “Wrecking Ball” Legursky or Jay Bradley, and then he’ll see if he’ll grant a match to the NWA legend, much to Valentine’s chagrin.

Kyle Davis at The Podium with Thom Latimer and he has big news. He wants gold, and is ready to pull the trigger. So he will shoot for the NWA National championship against Jax Dane. But what about Marshe Rockett, asks Davis, and Latimer states he won’t get it.

Now for the Dane…err, Main Event for the… 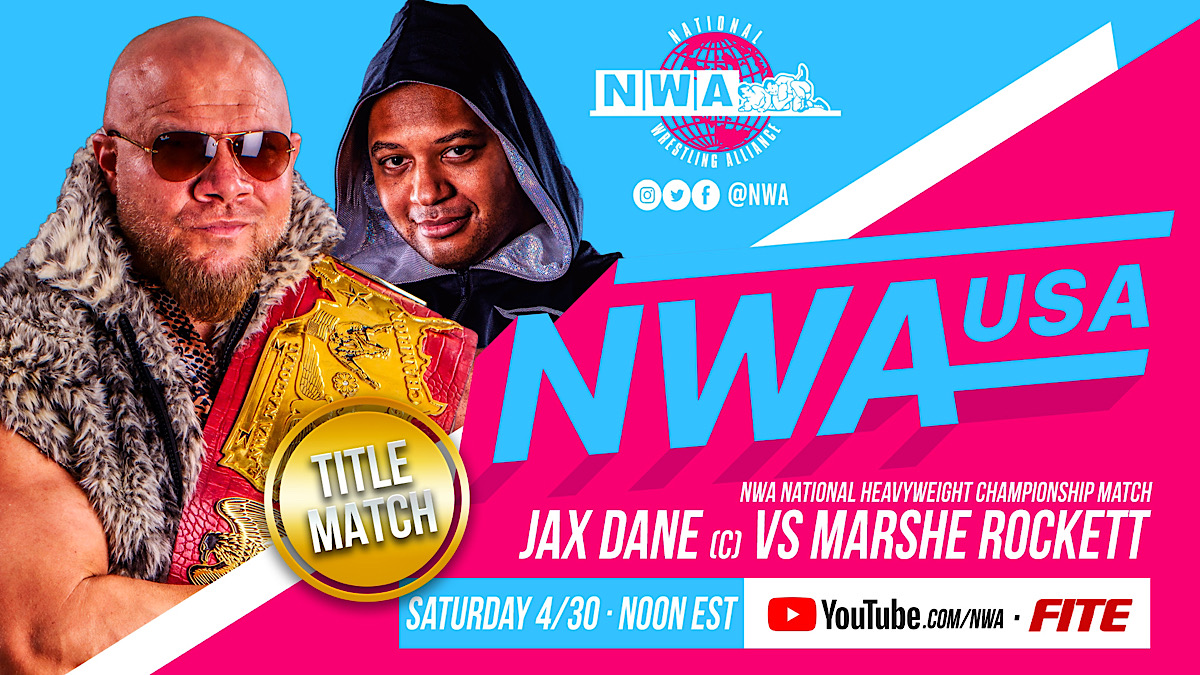 Jeez is sent back as Rockett wants to take on Dane on his own merits. As the bell rings, Dane immediately shows his power to All Day, but Rockett is more than a match for The Dane Event.
Dane pie faces Rockett, and he unloads forearms into a standing dropkick at the champ, and Dane gets out of the ring for a powder.

Rockett chases after him, and Dane attacks but Dane gets back in the drivers seat with a Samoan Drop, and then crotches Rockett on the ring post. Dane then gets Rockett in a single leg crab , but He digs deep and gets the bottom rope to break the hold. Dane argues with the ref, but he is immune to his objections. Dane goes back on the attack and send Rockett to the corner. He rushes but Rockett gets a boot up and he’s Rockett fueled with a powerslam for a two count. He sets up to deliver the Rockett Kick finisher, but Dane ducks and Rockett lands hard and pulls up as the leg Dane stretched gives him problems. Dane get a clothesline with authority on the challenger, and it’s academic as he gets the one, two, and three.

Dane still holds the title high as fans shower him with boos. Dane is please with himself on another successful title defense as the show goes to credits.

Honestly, the three way match looked like Jon Waters booked the match.  That not a criticism, that was…yeah.

Kamille needs someone who go toe to toe with her, and the current women’s roster is starting to thin a bit.

I’m never big on heel/heel matchups, but Rockett gave a good show to The Dane Event.  After Latimer announcement, I’d love to see those dudes get in a program.

for now, see you in seven!