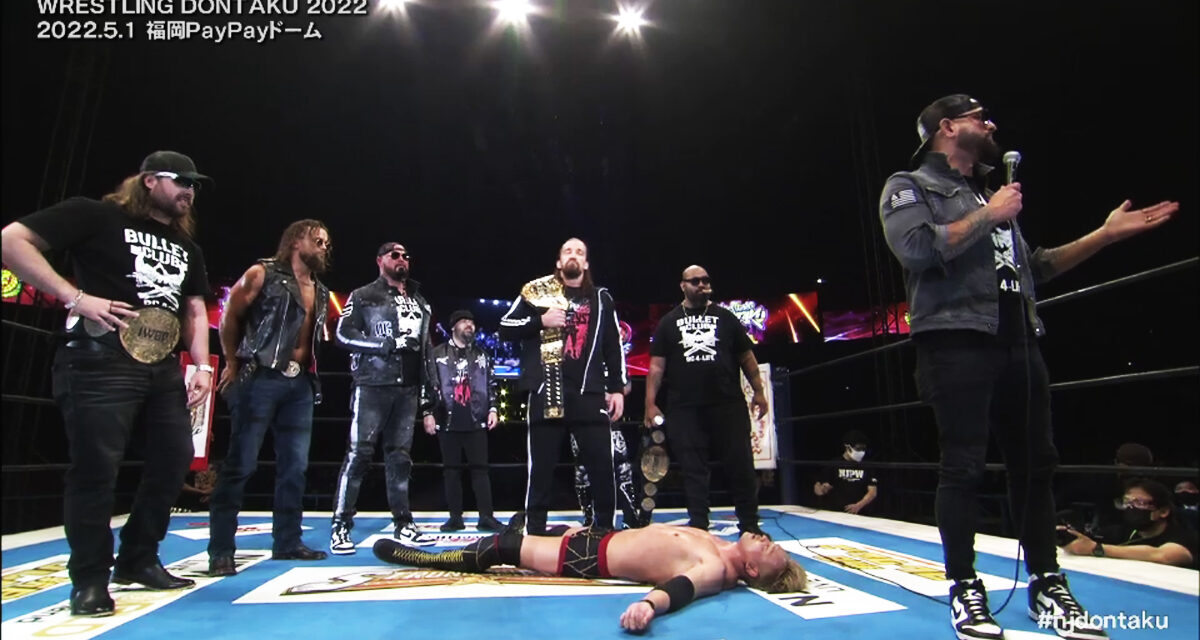 It was a good night to be Bullet Club at NJPW Wrestling Dontaku 2022. The dominant faction in NJPW saw Bad Luck Fale and Chase Owens win the IWGP Tag Team Championships and Taiji Ishimori defeat El Desperado to win the IWGP Junior Heavyweight Championship. They did lose some gold though as Tama Tonga beat Evil to become the NEVER OPENWEIGHT Championship. Tonga didn’t have much time to celebrate as The Good Brothers returned to NJPW.

As the match neared its end, Dick Togo hit Tonga in the head with a steel chair. Tonga was able to kick out of Darkness Falls. Tonga slapped the Sharpshooter on Evil so Dick Togo rang the time keeper’s bell. Tonga thought he has won but the official let him in on the news that he never called for the bell. Evil shoved Tonga into the official who is sent flying out of the ring. 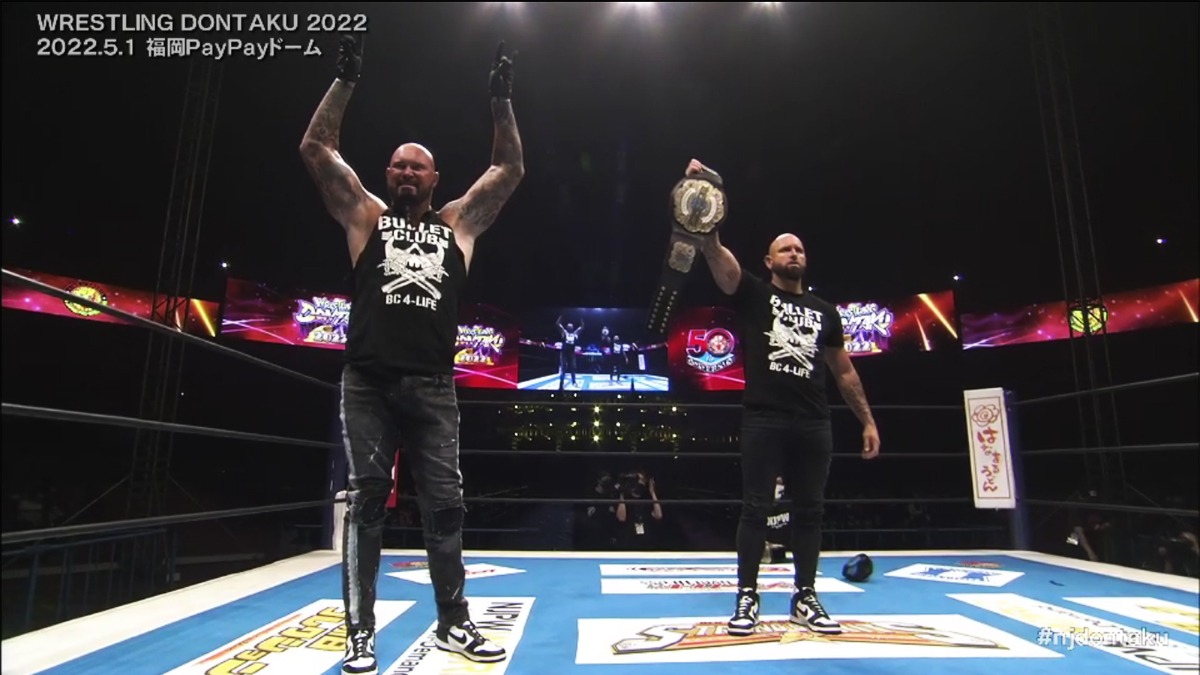 The Good Brothers are back in NJPW. Courtesy: NJPW.

Togo choked out Tonga with his garotte. Evil and Togo spiked Tonga with a Magic Killer. Jado and his kendo stick stopped them from doing a Super Powerbomb though. Jado cracked Evil right in the head with the stick. A Gun Stun wins the NEVER OPENWEIGHT Championship for Tama Tonga.

The Good Brothers hit the ring. They laid a beating on Jado and on Tonga. Loa rushed down to the ring to save his brother. He gets punked out too. Anderson took the NEVER OPENWEIGHT Championship belt and held it up high.

“You want this?” Anderson asks Tonga before Gun Stunning him on the belt.

“Tama Tonga, you have been talking way too much s–t! Do you realize what you have gotten yourself into? The Machine Gun is back!” Anderson said to the camera.

Another Bullet Club return saw leader Jay White suck all of the air out of Kazuchika Okada’s victory over Tetsuya Naito to retain the IWGP World Heavyweight Championship. 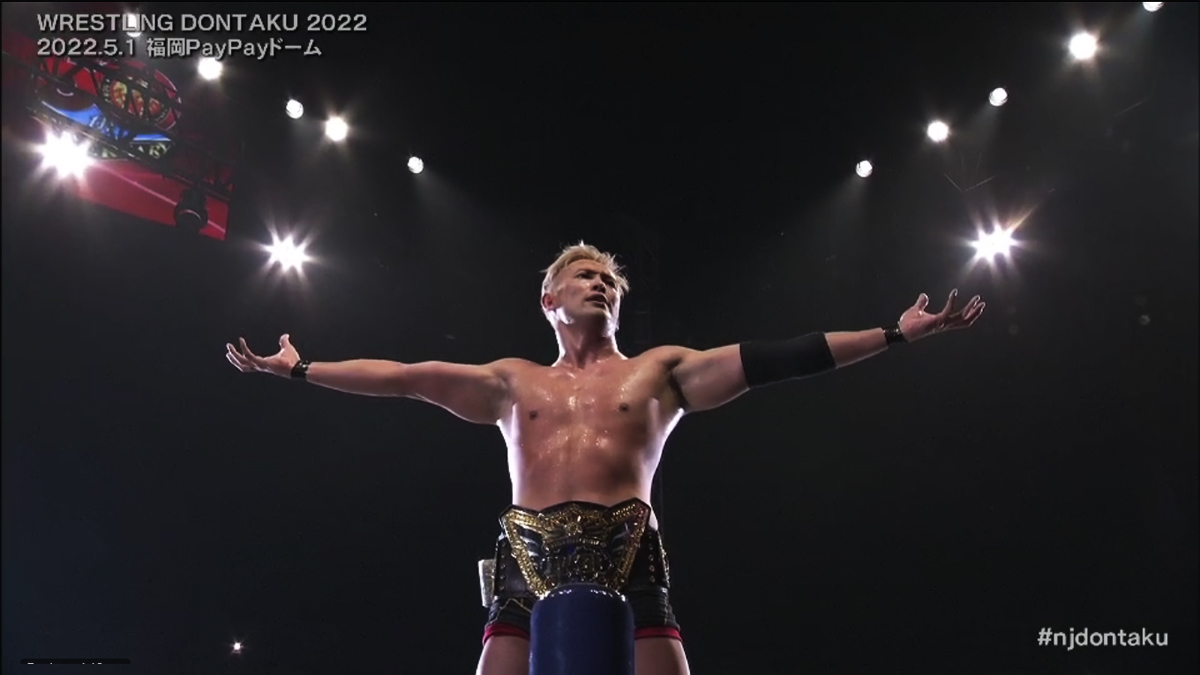 Okada knocked the microphone out of White’s hands before he could utter a word. He then held the IWGP World Heavyweight Championship in front of his face. Gedo struck from behind. White and Okada brawled until White drove Okada into the mat with a Blade Runner.

The rest of Bullet Club, including its latest member ‘Rock Hard’ Juice Robinson, came to ring, shared a few brews, celebrated their nine year anniversary and mocked a fallen Okada.

The mystery partner for Los Ingobernables de Japon was Shiro Koshinaka. Taichi pins Takagi with the Superman Pin but demands the official keep counting to eleven. Taichi and Takagi argue some more after the bell.

Yoh is on another slide. Hiromu hits the Time Bomb. He doesn’t pin Yoh though. He picks him back up for Time Bomb 2 and then does so. Hiromu demands Yoh get the hell out of the ring. He still thinks Yoh doesn’t have the heart, desire to be a pro-wrestler. 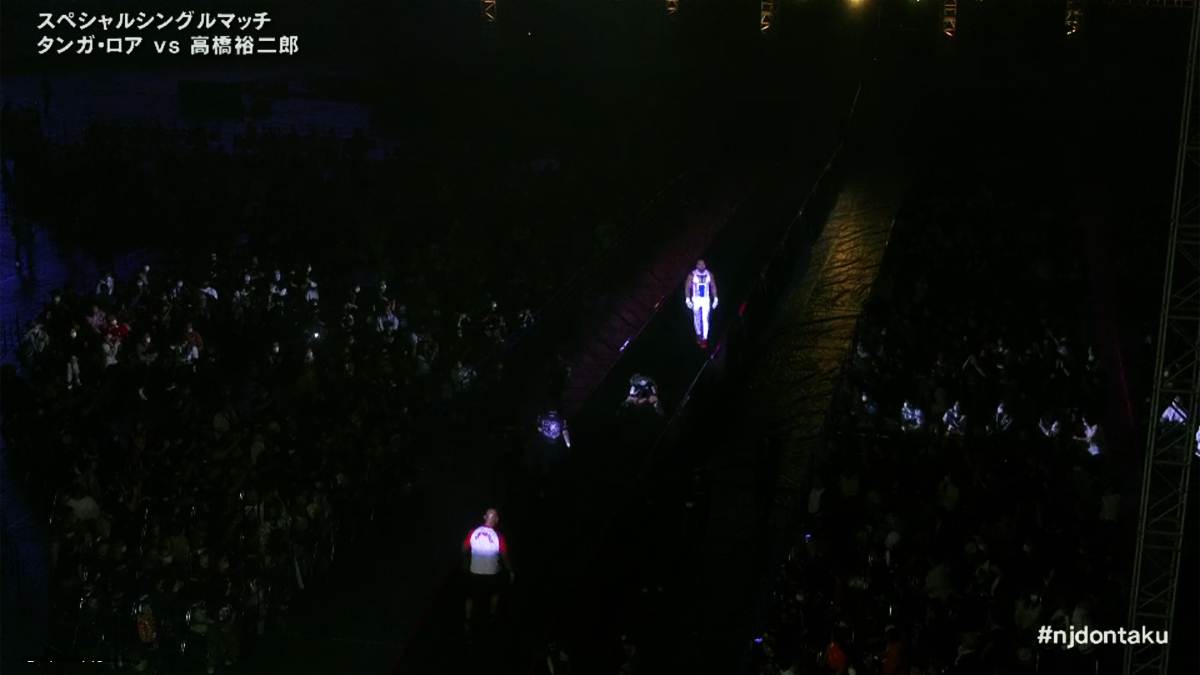 I silently cheer as PIETER (Tokyo Latina) is with Yujiro again. When she is on the card she boosts the rating by at least one full star. As Loa leaps up on the apron Yujiro shoves him to the floor. The bell hasn’t even rung yet. Yujiro ducks out of the ring and heads up the long, long rampway. Loa runs after him and clotheslines him from behind. Loa is about to powerbomb Yujiro on the ramp but Sho sneaks up from behind. As Loa turns around to deal with him Yujiro nails him. Sho and Yujiro beat Loa and Jado as the official tries to restore some order. Yujiro drops Loa on the ramp with a Fisherman Buster.

Sho jumps on the apron as Loa is ready to end things. Yujiro shoves Loa into the official. Sho swings with his wrench and misses. Jado fights him off. Loa powerbombs Sho with authority. Loa kicks out of Pimp Juice stunning Yujiro. Loa pins Yujiro with Ape S–t. 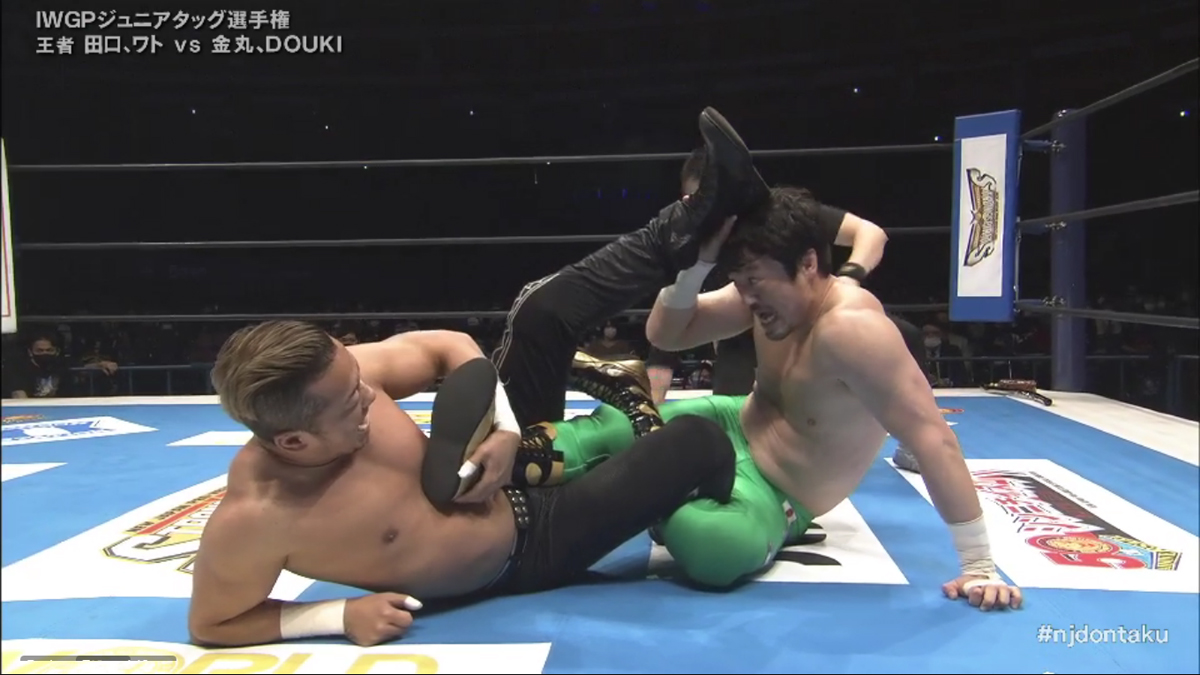 Taguchi fights off the figure four…using his head. Courtesy: NJPW.

Douki holds off the official so that Kanemaru can take a swig of whiskey. Taguchi forces Kanemaru to spit the booze into Douki’s face instead. Taguchi pulls down his pants, rolls up Kanemaru with his butt resting in his face. 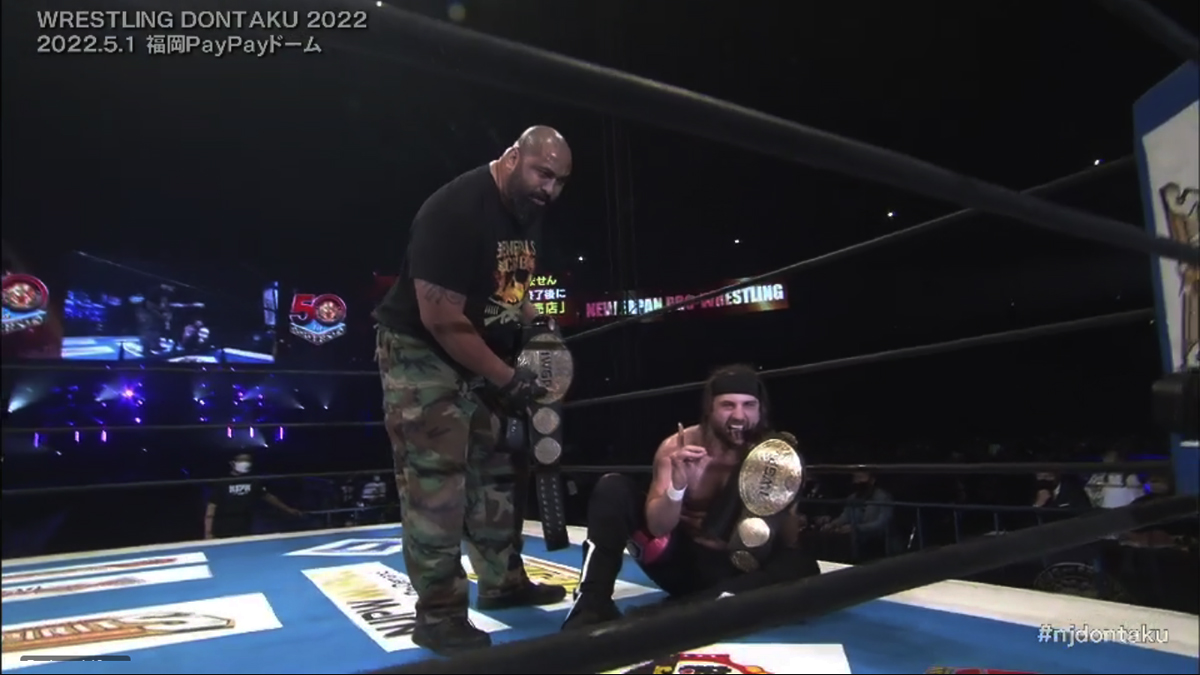 The match is now a Tongan Tornado bout. Lots of double-teaming and brawling. Fale flattens Goto with the Grenade. Owens pins him with his flying elbow from the top rope.