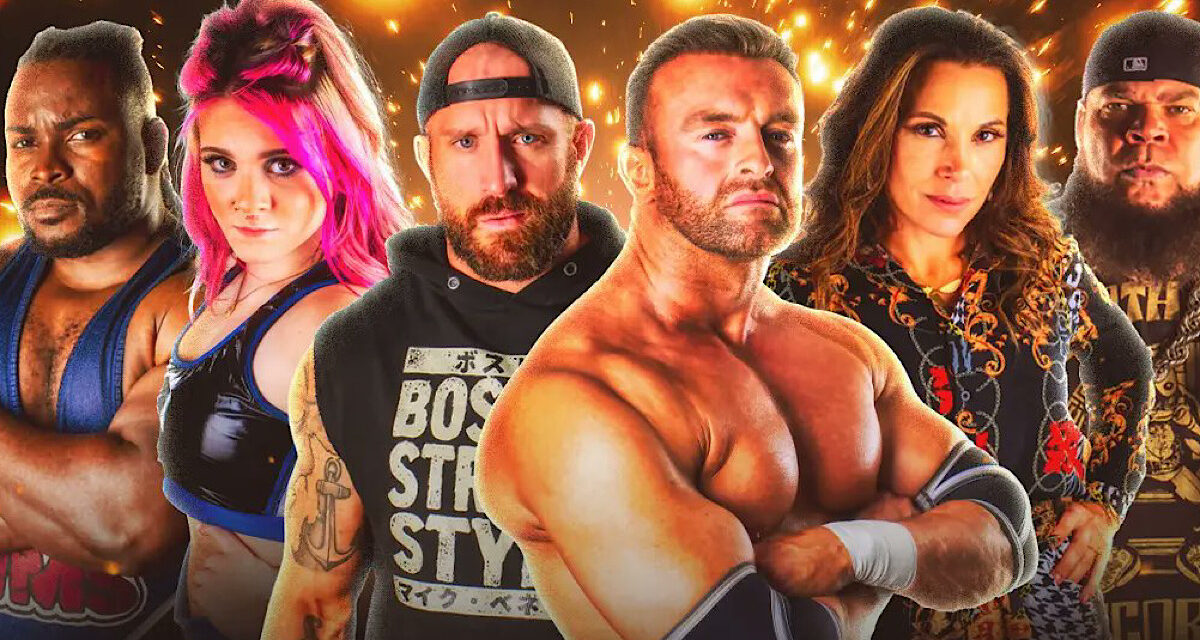 The National Wrestling Alliance has a lot of action, with Tag team action, another Tyrus Slam Challenge, and in the main event Kenzie Paige faces her toughest test with Hard Country herself, Mickie James.  Can the Pretty Empowered upstart take the veteran to the limit?

That’ll be later in the show.  We start with a cold open with May Valentine, and she has Aaron Stevens for an important announcement, and he states that he is done with wrestling.  This looks like a real moment…but then Valentine crying and Stevens consoles.  They start to show their feelings, and there’s talk of going away to Brazil (and even Stevens busts out some decent Portuguese to woo Valentine).  Then he switches in a different mode and says he’s going solo.  There’s no room for her on this trip and stop crying.

I swear, if Oscar Isaac is done with Moon Knight, have I got a replacement for the Marvel Cinematic Universe.

But let’s head to the Skyway Studios in Nashville, TN.  Joe Galli, Velvet Sky, and NWA Owner William Patric Corgan have the call tonight.  They ask what was going on with Stevens, but Corgan isn’t sure he’s sincere, but…we’ll see.

That leads to a recap of La Rebelion defending the NWA Tag belts last week versus The Briscoes but catch it here if you missed out.

As for your First Match of the night, it’s a hot one between… 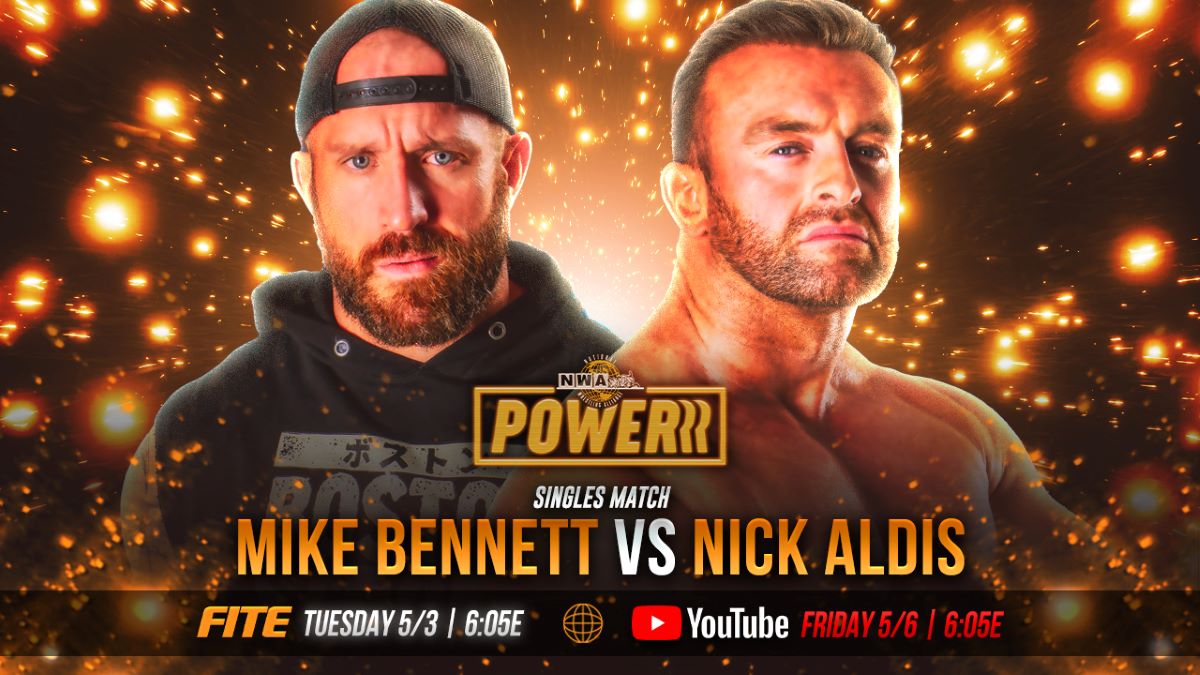 It’s been over a year since Bennett and Aldis faced each other for the Ten Pounds of Gold (and here was my first recap covering that event.  How time flies!)  As Aldis gets his ring jacket off, Bennett rushes after The National Treasure, but Aldis gets out of the way, and he hits his shoulder hard on the middle turnbuckle.  The ref checks the OGK member, and he wants to continue on, and Aldis goes right to a Michinoku Driver to cover for a two count, and then goes for a clothesline and a backbreaker but still gets another two count.

Aldis is firmly in the driver’s seat on offense, and he gets Bennet up the top turnbuckle for a superplex, but he stops The National Treasure with an arm submission, and then yanks him arm hard on the top rope.  Now that Aldis is pulling up game, Bennett has a target and nails a hammerlock DDT to get a two count.  Aldis goes outside for a breather, and Bennett baseball slides into his arm.  Back in the ring he attempts another spear, but Aldis had it scouted.  He tries a suplex, but Aldis’ arm is hurting and Bennett reverses to a brainbuster to cover but gets a two count.  Bennett locks on a London Dungeon submission on Aldis, but then switches to a sleeper.  Aldis gets up and slams Bennett hard in the corner to get out of the submission, but now Bennett finally lands a big spear for just a two count, and he is starting to get frustrated.  He gets a discus forearm, but Aldis trips him up for the Kingslayer but can’t lock it in due to his bad wing.  Aldis attempts again, and now he cinches the signature submission, and that’s too much strain on Bennett’s back, and he finally taps out.

Handshake of respect ends the match between the two men, much to the fans delight.

Valentine is backstage with the current NWA champion, Matt Cardona.  She asks about nick Aldis’ hot streak, and Cardon is tired of hearing about Aldis. He’s not the bad guy, but he’s the champ, and even Corgan knows it.  Cardona emphatically states again that the NWA is his company and tells Aldis his chances are over, so get back to the end of the line.  Matter of fact, he thinks no one is worth his time.  As for Valentine, he’s done here and walks off in a huff.

Time to get some tag team action, and it’s a… 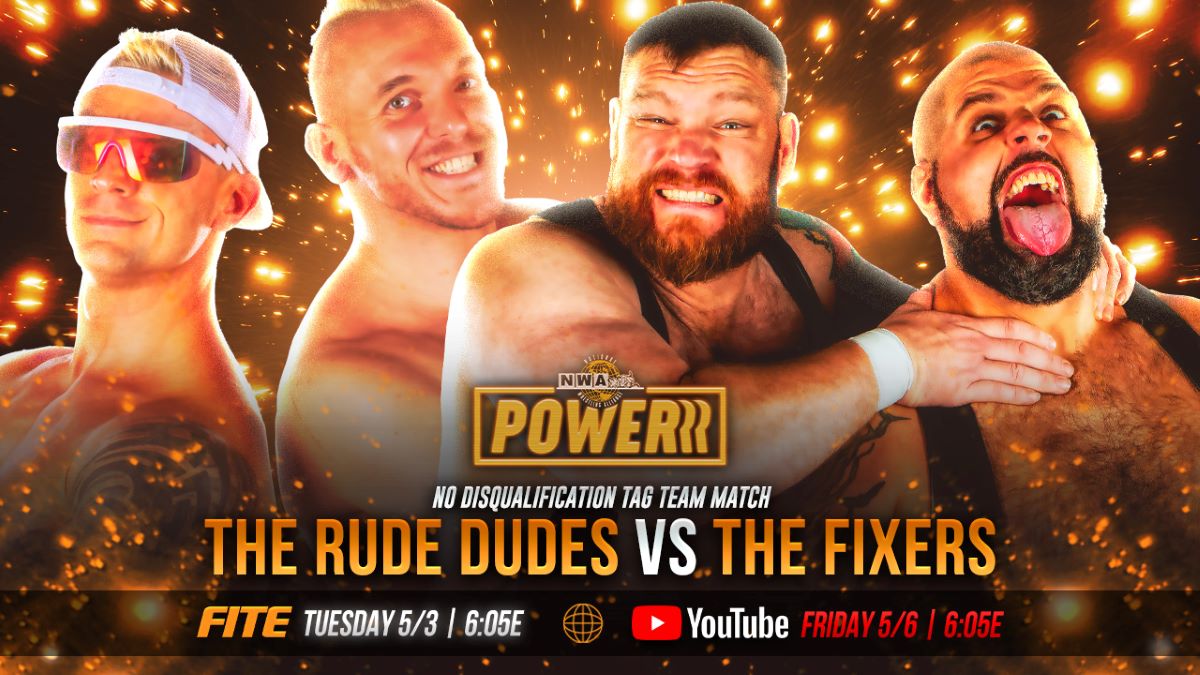 No Disqualification Match: The Fixers (Jay Bradley and “Wrecking Ball” Legursky) vs. The Rude Dudes (El Rudo and Jamie Stanley)

Two things that stand out in this match:  The Fixers are starting to get over with fans as favorites (dare I say babyfaces), and El Rudo is billed by Kyle Davis as “The Dad Bod Sex God.”

(Author’s Body Positive Blast:  I know “El Rudo”, and I have talked to “El Rudo.”  So, I say this directly, but respectfully, that he has no “Dad Bod” to speak of.  I’m closer to a dad bod, bordering on “Wrecking Ball” …but that is another reason I need to get back into my DDPYoga)

In any case, both Rudo and Stanley try early on to stop Legursky, but, well…The Rude Dudes get Fixed.  Bradley and Legursky channel The Nasty Boys and give Stanley the (arm)Pit of Despair.  Stanley manages to ram Bradley into Legursky, and Dudes get on offense as Rudo uses Stanley to steady himself for a top rope walk to a crossbody on the Fixers.  Then the Dudes become rude, but The Fixers turn the tide and Legursky becomes an actual “Wrecking Ball” with a cannonball to Stanley in the corner.  They even get Stanley in a nice double team with a sandwich slam to a backbreaker/elbow drop that gets a two count.  The Fixers follow up with Bradley getting a suplex to Stanley, and Legursky with a diving headbutt by Legursky but Rudo breaks the count.  The Fixers are dumped to the outside the ring, and Rudo goes up the top rope walk and tries a Moonsault on both men, but The Fixers catch him and use his as a lawn dart into the ring post.  From there’s it’s complete bedlam in and outside the ring.  Once the action gets back in the ring, Stanley faces Fixer fury with a double powerbomb to a knee/leg drop double team move, and the Rude Dudes are done.

Your Winners via Pinfall:  The Fixers.

The moral of the story:  Fixers Rule!

That leads to an NWA USA recap between Marshe Rockett and Jax Dane for the NWA National Title but read it here to save ya time.

Kyle Davis at The Podium with Da Pope, and Pope addresses his coming up short for The Ten Pounds of Gold.  He tells “Textile Kyle” about what’s next for Pope, and Pope states his past is not indicative of his future.  He’s gonna keep on keeping on.  He’s gonna get back up and fight.  In short, Pope’s gonna be Pope-ing. 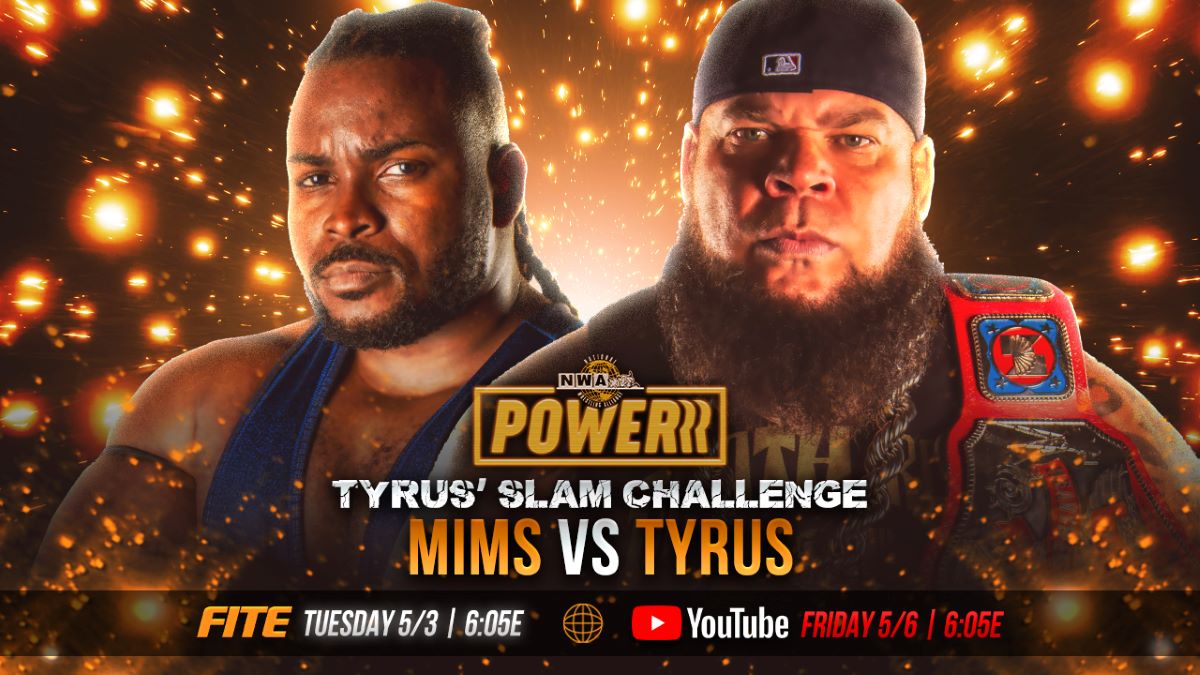 Big Strong Mims is the latest competitor to take on the NWA World Television Champion Tyrus’ Slam Challenge.  TheMan-ster is accompanied by his IdolMania Sports Entertainment co-horts. The champ takes his time getting in the ring while Mims gets readystill are .  The rules still are Mims has three tries to slam Tyrus for a shot at the Television title.  Mims tries to pick up the big man, but Tyrus backs up to keep him off-balance.  First attempt is expended, Mims tries again and then Tyrus hits him on the back.  He then tries to take out the challenger with a crossbody, but Mims pick him up… and he SLAMS DOWN TYRUS, and the fans go wild!  IdolMania come into attack, but Mims manages to fend them off, as the fans come unglued by this turn of events.  The refs jump in to restore order, while Tyrus is beside himself and promises Mims he will never get his hands on the title.  Folks, this is a Big Strong win for Mims.

Backstage, May Valentine is with Jennacide and Matt Taven with some announcements.  Taven states he went to Corgan and wanted a title shot.  Does matter for which one but will get one for he is I and is he, and he is Matt Taven. Jennacide also has similar news in that she will face KiLynn King and Chelsea Green next week for a number one contendership match to see who face Kamille for the women’s title.

Back at commentary, Corgan is at the desk, and it sticks in his mind what Cardona said about no one is worth his time.  So he decrees there will be a six-way tag match with Harry Smith, Doug Williams, and Nick Aldis versus the Cardonas.  Uhh… yes please!

But let’s get to the Main Event with… 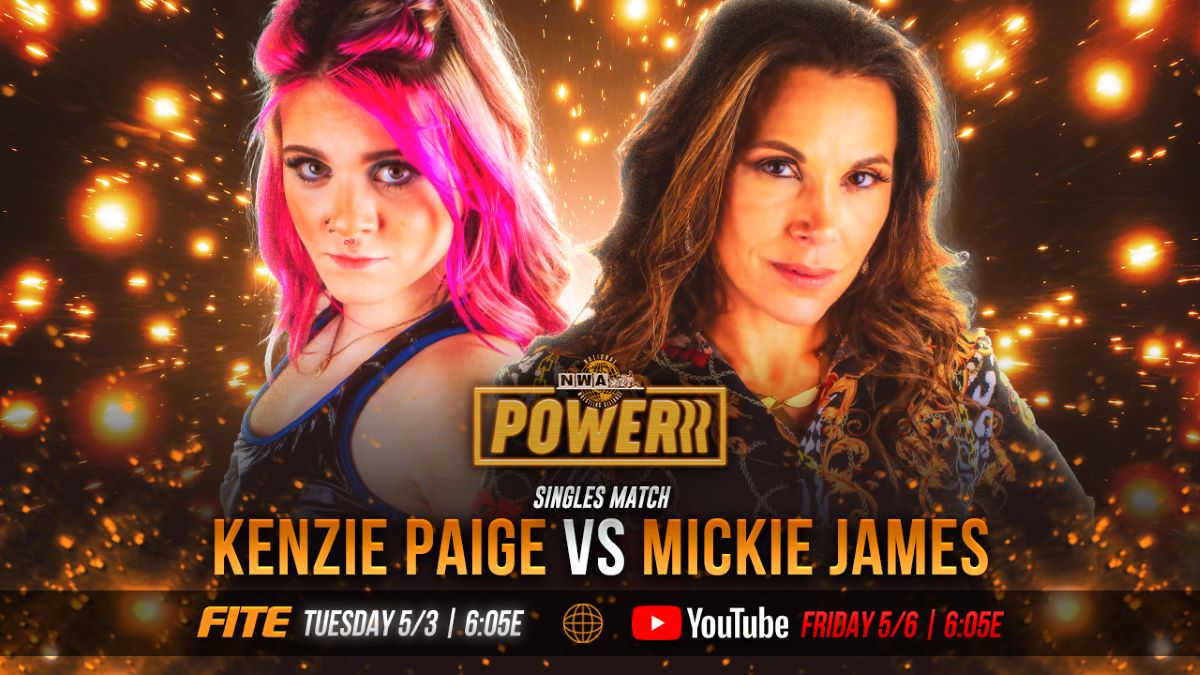 Angelina Love joins at commentary, and she and Sky have a Beautiful People moment together.  Paige has been quite the up-and-comer in the NWA< but James is among her biggest matches to-date.

There is a handshake to start, and the bell rings with both women going for a for a feeling out process, matching hold for hold, but James gets a hammerlock early in the match.  Paige tries a snapmare, but James keeps the arm locked in good.  The tempo of the match quickens as Paige tries a roll up but gets a two count.  Both women go back and forth trying to one-up the other, and Paige is living up t the promise.  James gets Paige with a straight right and a sliding boot to a split, and then a rollup but only gets a two count.

Paige is nailed with a Mick-kick, and she grabs her leg into a single leg crab then to a Boston Crab submission.  Paige writhes in pain but manages to crawl to get her hand and reach the bottom rope to break to hold.  Paige returns the receipt with a superkick that knocks her silly.  She covers James for a pin and gets a two count.  Paige slams James to the corner and then gets a suplex with a lateral press cover for another two count.  She tries a straitjacket, and James escapes the hold.  James attempts the Mickie DDT finisher, and Paige reverses with a roundhouse kick to cover for one, two…  not quite yet.  James comes back with an awkward looking flapjack, and James goes up top with an avalanche Thesz Press and then a super kick, but Paige ducks and hits an expressive clothesline for another close two count, and she is showing frustration.  Paige goes back on the attack, but James finally catches her in the Mickie DDT and it’s academic with the one, two, and three for the pin and the win.

After the match, both women shake hands, as the veteran James is happy with the win, but Sky and Love praise Paige on her bout and state she put on a well-fought match, as the show goes to credits.

Paige/James both made a good case for why Women’s wrestling should be featured more in the NWA, but the sizzle of Big Strong Mims slamming Tyrus to get a shot at the Television title was just as huge, earning that 1/2 extra star.

Overall the card was solid from top to bottom, so no complaints from me, so see ya in seven!