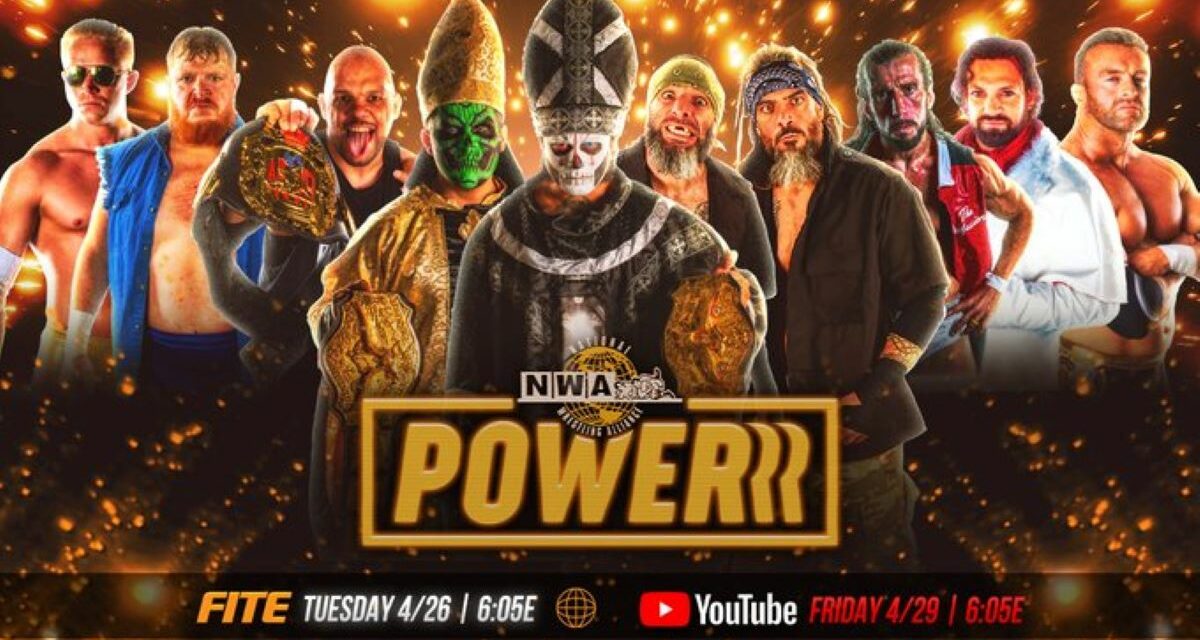 In our main event in the National Wrestling Alliance, the NWA World Tag Team Titles are on the line as one of the most anticipated matches in recent memory takes place! Current champions La Rebelión defend against the 2022 Crockett Cup winners the Briscoe Brothers.  Can Dem Boys be able to take on the tag champions of Bestia 666 and MechaWolf?

That is something to look forward to.  Speaking of things that aren’t as fun…The Cardona Family is with Kyle Davis at The Podium.  Strangely, the champ isn’t there, but Chelsea Green is.  She says to Davis, amidst boos from the crowd, that The Cardonas are the true champs and they run the NWA.  She goes on to say that she deserves to hold The Burke, and VSK and Mike Knox should be the tag champs.  VSK adds that they’re not only the best team, but the best family, and he tells Davis to his face that the only thing that doesn’t fit with The Cardonas is him.  Knox just barks at Davis, and he scurries away.  Truly, they hold The Power of Douchenozzlery™.

We’re coming to you from the Skyway Studios in Nashville, TN.  Joe Galli and Velvet Sky have the call.  Tim Storm is away on assignment, and there is no Austin Idol because…who cares.  Like Sky, my ears need a break.

We get a recap of the feud between Cardona and Aldis, and The National Treasure is laser-focused on seeing an end to “Alwayz Ready” and taking the Ten Pounds of Gold back.  So it’s only appropriate that the First Match is between… 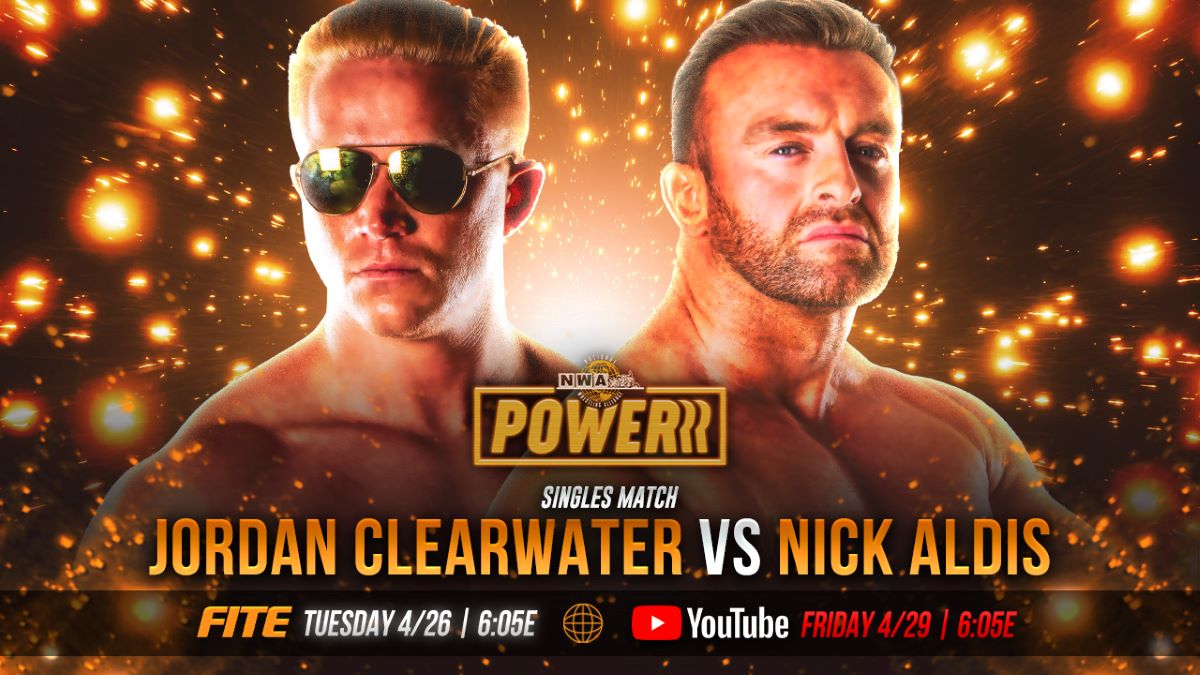 Aldis takes his time with The Golden Boy, and he is barely breaking a sweat putting the boots on the IdolMania member.  Clearwater goes outside and Aldis gives chase, but Jeez blocks him and he offers his card to Aldis, and he promptly rips it up.  Once back in the ring, Clearwater gets a forearm to the back of Aldis’ neck and a snap mare to a basement dropkick to cover for a two count.  The match is all Clearwater, and Aldis is on the ropes.  The Golden Boy attempts the Midas Touch finisher, but Aldis dodges and gets him crotched on the top ring ropes.  He gets the Michinoku Driver to cover Clearwater for a two count.  Aldis goes to the top rope and Clearwater catches him to attempt a superplex, but Aldis pushes him off to the mat and he lands an elbow drop.  Jeez jumps on the ring apron, and Aldis pops him in the mouth to crash to the outside.  Clearwater goes for the Midas Touch, but The National Treasure catches the boot, flips him down, and transitions into the Kingslayer cloverleaf, and the Golden Boy taps out.

Galli is excited that the fans will see tag team championship action, but there’s another title match on the horizon, and this one is for the… 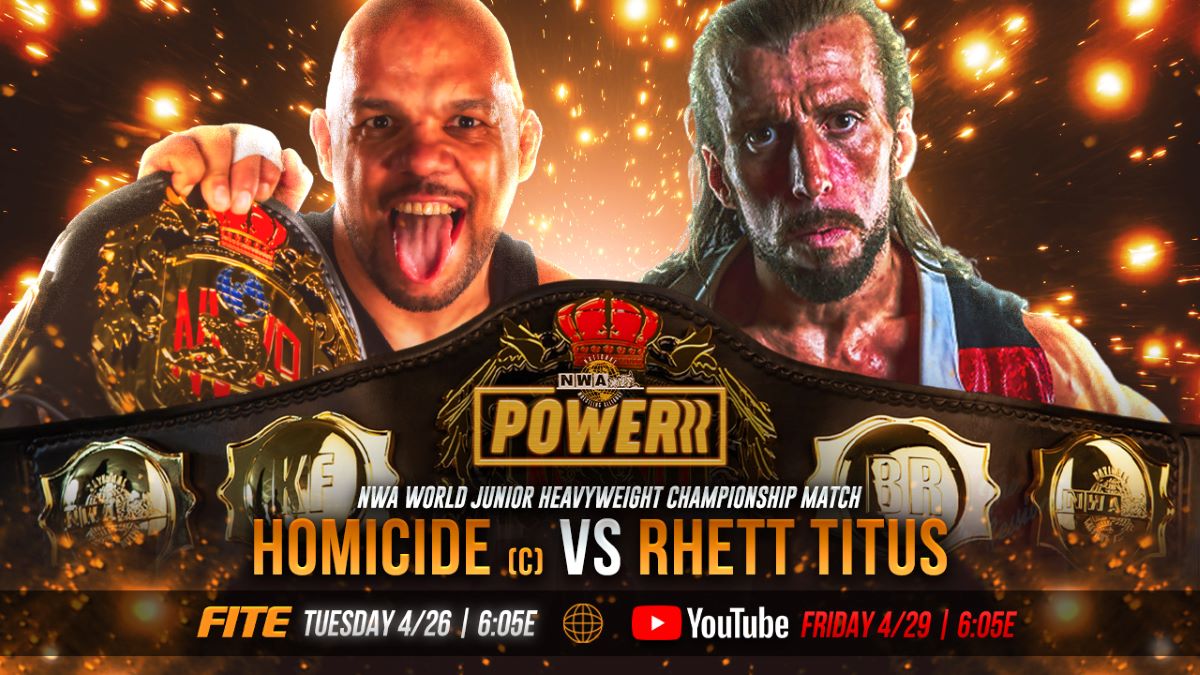 Titus offers the Code of Honor before the match, and Homicide slaps it away.  It’s like Ring of Honor, circa the mid-2000s.

Titus nails the champ with two running boots and covers for another two count but can’t put away Homicide.  The Notorious Legend goes up and now delivers the tornado DDT for a two count.  But Titus gets up and transitions to a single leg crab and sits deep in the submission hold, but Homicide reaches ropes, and the ref makes Titus break the submission.  Homicide returns with a modified Koji Clutch submission, but the long legs of Titus manage to reach the ropes to break that hold.  Titus nails a standing dropkick to Homicide to cover, and the ring veteran is quick to get his hand on the ropes before the ref can make the pin count.  Finally, Titus rushes at Homicide in the corner, but he dodges, and Titus’ momentum goes straight to the ring post.  Homicide capitalizes by taking The Professional up the top turnbuckle, and he nails the avalanche Koji Cutter.  He gets the pin, and he retains the belt.

With another successful title defense, Homicide is certainly lending credence to the belt and his rep as a fighting champion.

At The Podium with Kyle Davis is Angelina Love, and she announces to the fans at ringside that she signed a contract with the NWA.  Davis asks when her next match is, and she coyly replies, “You’ll have to wait and see.”

We get recaps of the latest NWA USA, and it was “Fixed” by “Wrecking Ball” Legursky and “The Boss” Jay Bradley.  There’s also a cool interview we did with Legursky you should check out.

We head backstage, where May Valentine is with Mickie James.  She asks Hardcore Country what’s going on with the Cardonas, as she appears upset.  James lays it out, that she and Aldis had set their sights high with the Crockett Cup in the title match, and she’s disappointed with Chelsea Green’s interference with Jeff Jarrett, and that it caused Jarrett to believe James was the culprit.   James states that The Cardonas stole the championship, and her being a little upset is an understatement.  She also says she wanted a fight for The Burke with Kamille and came to Billy Corgan to propose that.  Well, she has a fight…with Natalya Markova. Even Valentine can’t hide her disgust, and James assures Markova that she’s in a fighting mood.

As if Russian relations with America weren’t tense already.

Speaking of tense, your next match is… 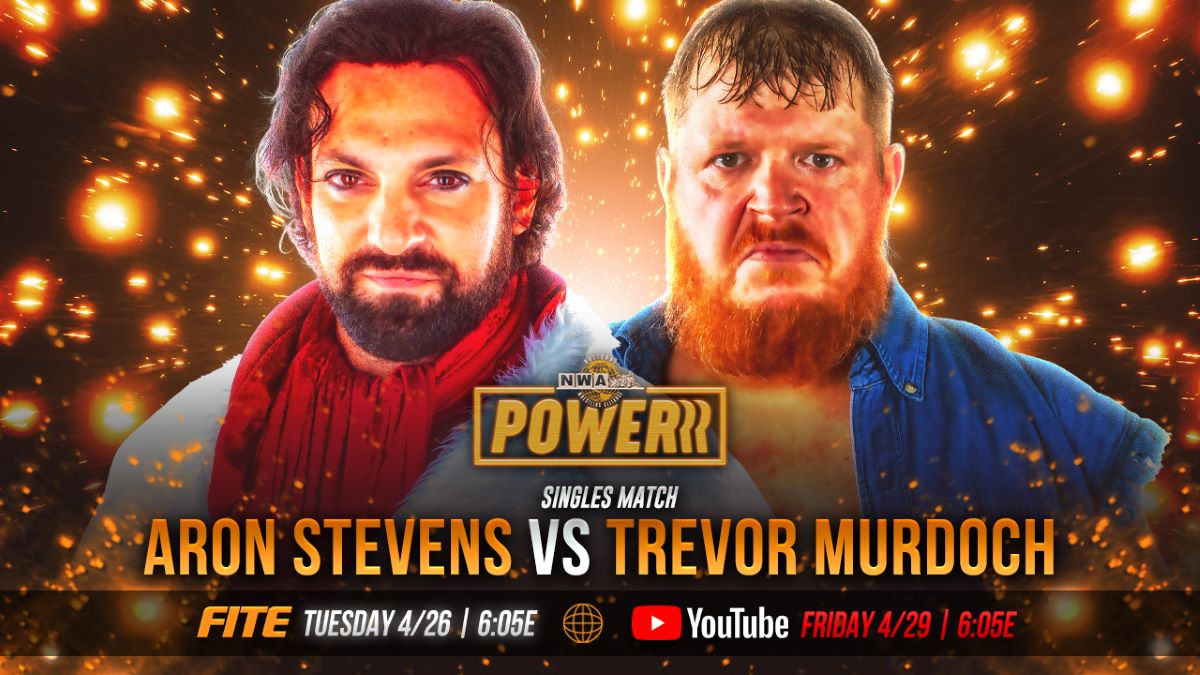 Stevens promised a few weeks ago on May Valentine’s Heart to Heart that he would beat respect into Murdoch, which, you should check out:

And now you know the rest of the story.

As the bell rings, Stevens throws a scarf to distract, but Murdoch ain’t playing games as he just manhandles Stevens, who gets outta Dodge to take a breather.  Murdoch goes in pursuit, and Stevens is back in the ring and tries to sneak attack again, but Murdoch scouted the move and evaded.  He puts Stevens in a submission move that exposed his right side, and he slammed his fist to his ribs.  Murdoch charges at Stevens in the corner, and now he gets the former champ tied in the tag ropes.  From there, Stevens goes full psycho with shots to the ribs, but even tied up Murdoch fights back, and gets freed from the snare.  Murdoch goes up top and gets Stevens in the flying bulldog finisher with all his weight crashing into it, and he ain’t getting up.

Your Winner via Pinfall:  Trevor Murdoch

No one seems to be able to stop the big man’s rage and good luck to the next person that faces him in the ring.

Kyle Davis was with Jax Dane earlier today, about how Marshe Rockett will face The Dane Event for the NWA National title.  As Dane lists his accolades (again), he talks about “his show” NWA USA, and how he is bringing prestige to Saturdays.   If nothing else, he has no shortage of confidence.

We now go back to the ring for women’s action, and it’s…

Well, we now know when Love’s match is going to be (even though we saw it on NWA USA for her debut.  Just saying’.)  The fans hit dueling chants for “Too-tie Lynn/Let’s Go Love” as The Beautiful People is able to outwrestle Lynn, but the Little Blue Dragon gets on offense and tries a punt kick on the outside, but Love anticipates and sends the Dragon crashing to the ring apron.  Love throws her arsenal at Lynn with a pump handle hammerlock slam, then a fireman’s carry to a Samoan Drop, but each time it’s for a two count.  Lynn gets a spinning mule kick to Love’s mush for a two count.  She tries to get Love on her shoulders but gets out of the hold.  Love delivers The Botox Injection and that’s enough to keep the Little Blue Dragon down for the three count.

Your Winner via Pinfall:  Angelina Love

Afterward, Love shows respect to Lynn, and I’m curious what other Allure is in store.

Suddenly, IdolMania Sports Management comes out in force, sans Idol.  Jeez is the mouthpiece for the stable and tells the Nashville nerds to have a gander at the Golden Boy while he disrobes.  He then delivers the next name in the Tyrus Slam Challenge, and it happens to be Big Strong Mims.  Davis tries to interject, and Tyrus grabs the mic (with his hand in it), and ensures he cannot be lifted off, and he will reign as the champion.  “Nuff Said.

Latimer and Kamille out with an announcement and that is…no announcement.  They’re just playing up that they’re the Power Couple of the NWA.  So…yeah.  Color me underwhelmed.

But that is a small criticism, as we head for the Main Event and it’s for the… 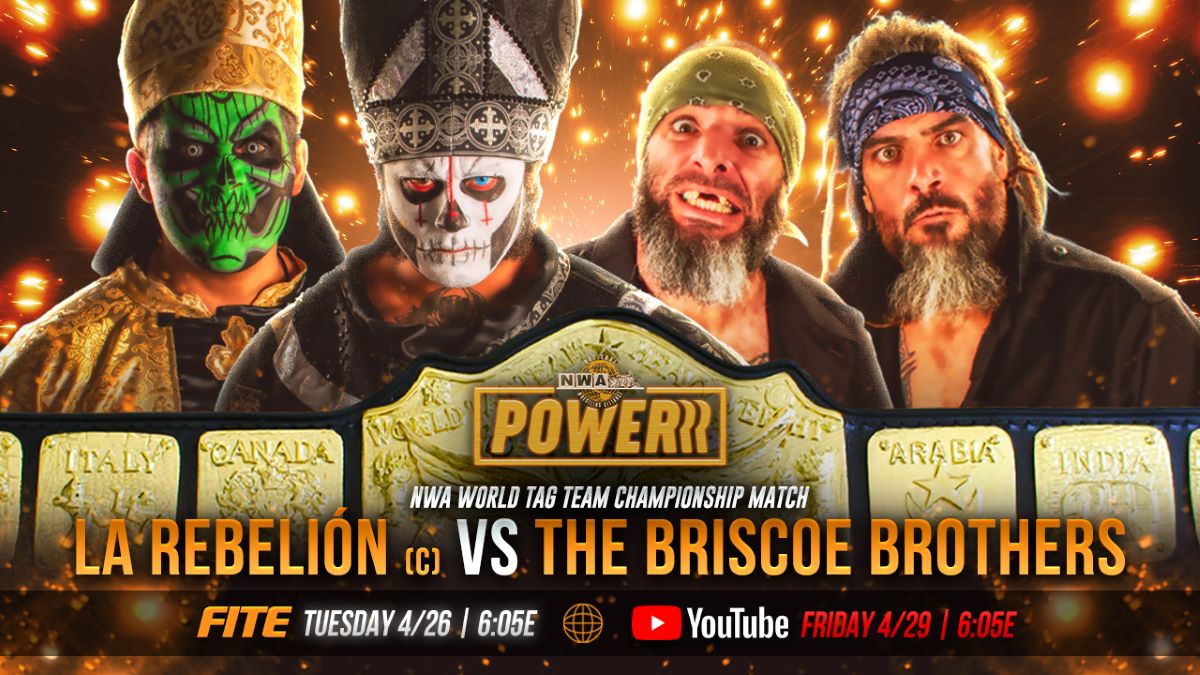 The fans are solidly behind Dem Boys, and the Crocket Cup winners are looking to make a statement in the NWA Tag ranks.  ‘Wolf and Mark start, and it’s apparent Wolf’s Kung Fu is not strong.  He tags in Bestia, and then big brother Jay comes in and clotheslines Bestia inside out.  Dem Boys utilize their veteran tag team skills and keep Bestia isolated in the corner, and they get the luchador outside as Jay tees up Bestia for Mark to land a rope-assisted dropkick to the outside.  They send him back in for Mark to cover for a two count.  Mark and Jay hit a double shoulder tackle, and the Sandy Fork natives leave no room for error, making The Rebelión member a Bestia in Peril.

However, the Tijuana Gremlin fights back and whips Jay hard into the turnbuckles.  He gets to his corner and gets the hot tag to MechaWolf, and he cleans house in the ring, delivering a Uranage Smash to the Briscoe Brothers for a pin to Mark, but gets a two count.  There’s double team action by La Rebelión, but they can’t put away Mark Briscoe.  Jay comes in like a raging bull to help his brother, and they hit Redneck Boogie on Bestia but get a two count.  Wolf and Bestia send Mark out of the ring and get a badly botched Mark of the Beast to cover Jay for one, two…he kicks out at the last minute.  Jay fights back and knocks out both Rebelión members.  A DVD to ‘Wolf by Jay, and Mark lands with an elbow drop for a close two count.  Mark tags to Jay and tries the Jay Driller, but ‘Wolf wriggles out.  Dem Boys go for the Doomsday Device, but ‘Wolf ducks and rolls through at the last minutes, leaving Mark sailing to the other side.  Bestia grabs Mark’s leg, as ‘Wolf uses the Victory Roll to pin Jay for the one, two, and three.

The Briscoes look on in disbelief as the tag champs hold the belt high as the show goes to credits.

Lately, the NWA is becoming more reminiscent of Ring of Honor, and that is an awesome thing.  The Tag match with the Briscoes and La Rebelion was top-notch (aside from the botched finisher), and I want a rematch as soon as possible.  The rest of the card was great, and the highlight of Angelina Love wrestling in the NWA was a nice surprise.  Curious what she and Velvet Sky will do to pair that synergy again.  Also…is Mandy Leon far behind.

Either way, this is something fun to look forward to next week, so see you in seven!