NWA USA: The Fixers take over 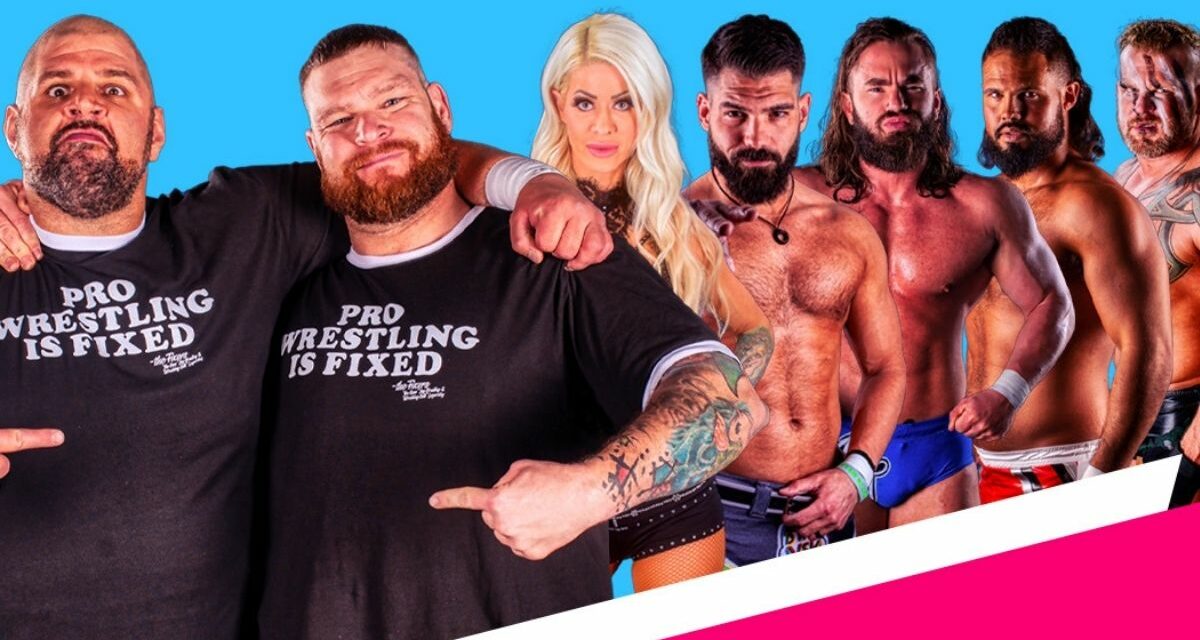 Wrecking Ball Legursky and Jay Bradley are known as The Fixers, and they have primarily been muscle for Colby Corino in the NWA. This week, NWA USA lets them run the show, technically called NWA PowerrrSurge USA. Interesting choice — guess May Valentine wasn’t around?

Legursky is a pretty funny dude, big and gruff, and Bradley is usually the quiet one, and he had a cup of coffee in WWE developmental. But here, Bradley is the main talker, and Wrecking Ball is the comedy relief. Hyping the show, Bradley cracks, “It’s so hot even Meltzer doesn’t have these inside secrets.”

Joe Galli, Velvet Sky and Austin Idol have the call. Velvet insists that the name Matt Cardona not be mentioned, and, of course, VSK is one of Matt’s best friends/protégé. Alex Taylor has been more vicious of late, so there is no clean good guy — just good, well-paced action, where both took shortcuts.

The Fixers were back, and talked about what it takes to be successful in pro wrestling — Hindu squats, only 1,000 a day; push-ups — “I didn’t tell you to stop. We have tag titles to earn,” Bradley told Wrecking Ball. Bradley noted that cereal is perfect for watching NWA USA.

Galli noted that Riley Rockett is no relation to Marshe’ Rockett — thanks for the obvious! Velvet is happy one of her BFFs, from The Beautiful People, is in the NWA, and this is Velvet’s debut here. Love won with the Botox Injection in what was a squash. Galli thinks Love will be challenging Kamille soon enough for the NWA Women’s belt. Love looks like a toothpick compared to Kamille.

An adult-content warning flips by, which made me think they were going to hype Velvet Sky’s After Dark from NWA Powerrr this week, but no.

Back with The Fixers, apparently surprised they are back on the air. Wrecking Ball gets it all out. Bradley says he is “The Boss” — which I don’t remember being attached to him before.

They want to talk about rats — lots of double-entendre here. “I’ve never seen a rat with tails,” said Bradley. “You’ve got to throw the meat out there and reel them in.”

“I know you’ve eaten a rat,” Bradley tells his partner.

Not sure what to say about this, it wasn’t especially funny.

Rush Freeman is from the Ill-Begotten, in case you didn’t know. Garrisoin Creed, with his face paint and gloves (which Velvet questions), has “animal magnetism” notes Galli, which is the kind of line Vevet usually uses. The animal part comes out as Creed delivers a “snot rocket.”

Galli hypes how Freeman has improved in the NWA, gotten bigger and more polished, which almost gives away the winner.

Hmm, the gloves appear to be part of the storyline, the knuckles raised apparently enough of a tip-off.

Creed delivers a massive punch, and then adjusts the gloves after. Referee Scott Wheeler looks into it, but doesn’t find anything. Freeman is still rocked by the punch minutes later.

The fans start chanting, “Let’s Go Rush!” and that gets him up again going. Creed misses with a few loaded gloves, and Freeman almost pins him with a belly-to-belly suplex. A German suplex by Freeman on Creed goes a little weird, and then Creed hits one himself. Back and forth and Creed goes to load the glove again.

Freeman wins with a Blue Thunderbomb.

The Fixers close the show, sad that they had to say goodbye. Wrecking Ball sings us out, how it was nice getting to know us.

Is this supposed to be a comedy show or a wrestling one? Unsure. Some good competition in short matches, though eclipsed by the Fixers.