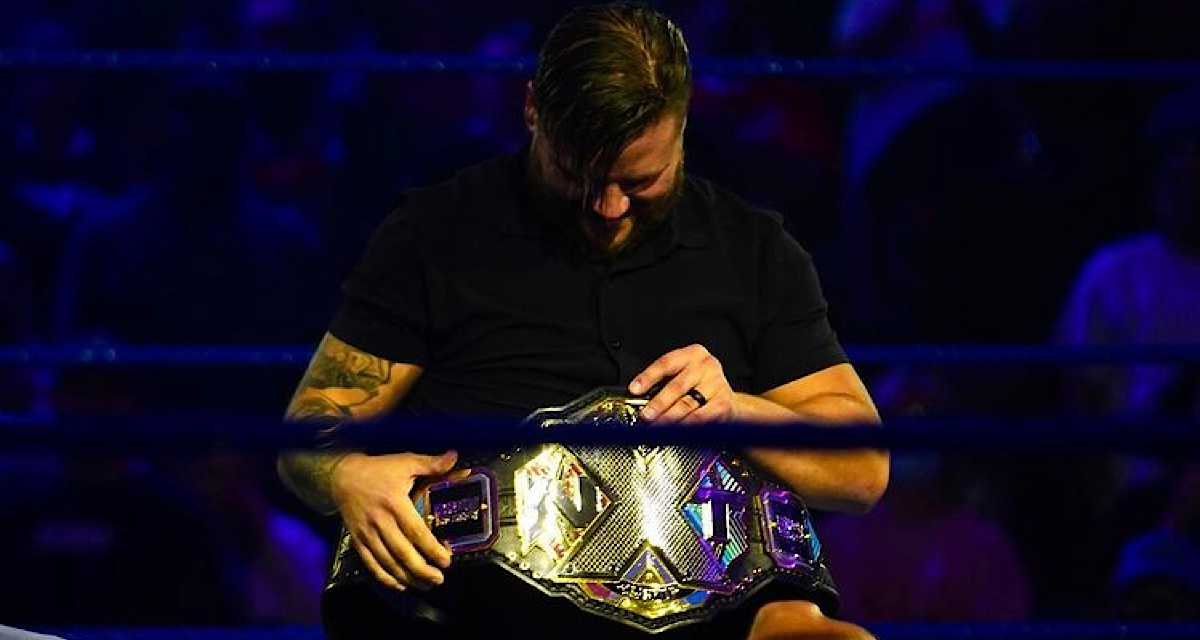 NXT 2.0 regularly features cheesy dialogue and stereotypically derivative characters, but Joe Gacy’s army of druids may take the cake. In the closing segment of tonight’s episode, druids surrounded the ring as Gacy described his molded version of NXT – one of acceptance, but “the mission isn’t quite accomplished.” After sending NXT Champion Bron Breaker plummeting last week, Gacy said his opponent wasn’t cleared for next week and a new champion would be crowned. But out came WWE Hall of Famer Rick Steiner, who declared that his son would defend the title at NXT Spring Breakin’. Before the druids could attack, Breakker arrived and cleared through the mass of cloaks before Gacy took the wind out of the champion – and the show.

“The Twitterverse is foaming at the mouth as we speak,” says commentary about Lyons. The hype, however, stops when the bell rings as the striking game of both competitors is so noticeably awkward. Granted, rookies Lyons and Legend have improved from their last encounter, and the former gains the pinfall victory with a tornado kick. Natalya immediately attacks the victor, but making the save is Cora Jade with a skateboard in-hand.

Roderick Strong gives Diamond Mine a stern talking to: “This group is too good to crumble like my last group did!” He brings in Ivar and Erik of the Viking Raiders, who will be the Creed Brothers’ hand-selected opponents next week.

Backstage, D’Angelo says, “When I get done with mister excitement, he’s gonna be sleeping with the fishes. Santos (Escobar)! You know what I’m talking about, right, guy?” D’Angelo is deceptively big, but Wagner still utilizes his size advantage in the opening goings. Stone – who has evidently also fallen victim to name redactions – cheers on Wagner ringside as he slams D’Angelo into the apron before picture-in-picture. They trade strikes, and D’Angelo takes his opponent down with multiple belly-to-bellies. As D’Angelo is sent outside, Legado del Fantasma jumps onto the apron, and Escobar attacks his rival with a foreign object. Two of D’Angelo’s “wise guys” fend off LDF, but Wagner delivers a big boot for the pinfall victory.

Toxic Attraction directs some horribly cliche insults towards newcomer Roxanne Perez, who challenges the faction to a matchup tonight.

Josh Briggs, Brooks Jensen, and Fallon Henley are fired up to take out Legado del Fantasma. The fine-looking Sofia Cromwell walks by, and Jensen understandably loses his concentration.

Nathan Frazer is scheduled to debut, but his opponent is blindsided by Grayson Waller, who is more fantastically obnoxious than usual. He starts talking to Chase University, saying, “Your sorority girls are built like refrigerators!” Frazer jumps in and takes out Waller with an intense dive, and Andre Chase describes it as a “teachable moment.”

Tiffany Stratton is interviewed backstage before Grayson Waller interrupts, and they agree about Nathan Frazer’s “terrible accent.” Waller “can’t stand anyone with an accent” despite being Australian.

It’s been an eventful week for 5’0” Chance, who changed her name from Kacy Catanzaro and was included in the WWE 2K22 Banzai Pack DLC with other small-sized characters such as Yokozuna, Umaga, Rikishi, and Omos. Meanwhile, Leon makes a comeback as Chance is mysteriously taken out ringside. The latter eventually recuperates and hits the 450 Splash for victory.

Referees and medical attend to Brooks Jensen, who is floored with a leg injury. “They did this!” partner Josh Briggs screams out.

Kay Lee Ray must now reintroduce herself as Alba Fyre. “A resurrection of where I come from,” she explains.

Briggs and Henley are outnumbered with the absence of Brooks Jensen, but the big man runs through the opposition anyway. As Joaquin Wilde takes over, Mr. Stone joins commentary to explain that “just like Ikemen Jiro had wandering eyes, Brooks Jensen had wandering eyes. So you two do the math.” Henley and Elektra Lopez fight off somewhere, and Briggs loses yet another partner. Wilde and Cruz Del Toro hit their double-team finisher for the pinfall victory as innocent men.

Natalya and Lash Legend are interviewed backstage, and the former is “gonna find out how flexible Nikkita (Lyons) really is” at NXT Spring Breakin’ next week.

Kiana James is “bringing sophistication into this Breakout tournament. I calculated all the odds, and this tournament is going to work out in my favor.” So, she’s an accountant?

North American Champion Cameron Grimes is on commentary as Williams targets his opponent’s left arm. William’s suave mic skills unfortunately haven’t translated to smooth in-ring work yet, making this match painfully methodical. Sikoa brings big energy with his comeback and definitively puts his opponent away with a top-rope splash. Afterwards, Grimes gets face-to-face with Hayes before getting superkicked by Sikoa.

Edris Enofe is confident about his and Malik Blade’s match with the Viking Raiders. He pep talks his partner into screaming, “I see speed, I see power, I see heart, and I see a badass who ain’t afraid of no man!” These two are an underdog team to get behind.

Legado del Fantasma celebrates their victory before turning their attention to Tony D’Angelo. Santos Escobar says, “He got a taste of his own medicine… an eye for an eye.”

Malik Blade and Edris Enofe vs The Viking Raiders

Smackdown’s Ivar and Erik are doing something worthwhile again as the audience chants “welcome home.” Enofe gets solid offense in before getting absolutely mauled by the opposition. Ivar suppresses Blade’s comeback attempt, and a double slam gives the Viking Raiders their best-looking victory in ages. The friendly vikings shake their opponents’ hands as the Creed Brothers appear on the entranceway.

A great, powerful video prepares for Wes Lee’s unexpected singles run. “I can bitch and complain about how everything is unfair, or I can knuckle up and make the waves that I’m destined to.”

Tony D’Angelo responds to Santos Escobar and his crew, saying, “Tony D made a few calls, and now my crew’s here.” He introduces Troy “Two Dimes” Donovan and Channing Lorenzo, who are somehow more stereotypically derivative than the Don himself.

Speaking of lame gimmicks, Perez the childhood video-game player is being sent into the deep end. She gains the upper hand over the NXT Women’s Champion, bites her finger, and slams it into the steel steps. Following picture-in-picture, Rose works down her opponent until the comeback is made, but the champion delivers a jumping knee for victory. Wendy Choo appears behind Toxic Attraction with water guns, and the three run to the entranceway to be trapped by a net. Choo and Perez spray Toxic Attraction away with silly string as they scream like they’re on fire. What a mess.

19-year-old Sloane Jacobs says “the path to the women’s title is by winning this Breakout tournament.”

“Let’s go change the world,” Joe Gacy says, exiting his circle of druids and heading to the ring for the show’s final segment.

There are always sporadic highlights throughout the show, and it’s usually the simple things – like Viking Raiders’ dominant match or Legado del Fantasma’s tag team showings. But too much of NXT is overproduced and overwritten nonsense that can be a chore to get through. Tonight was just one of those nights.