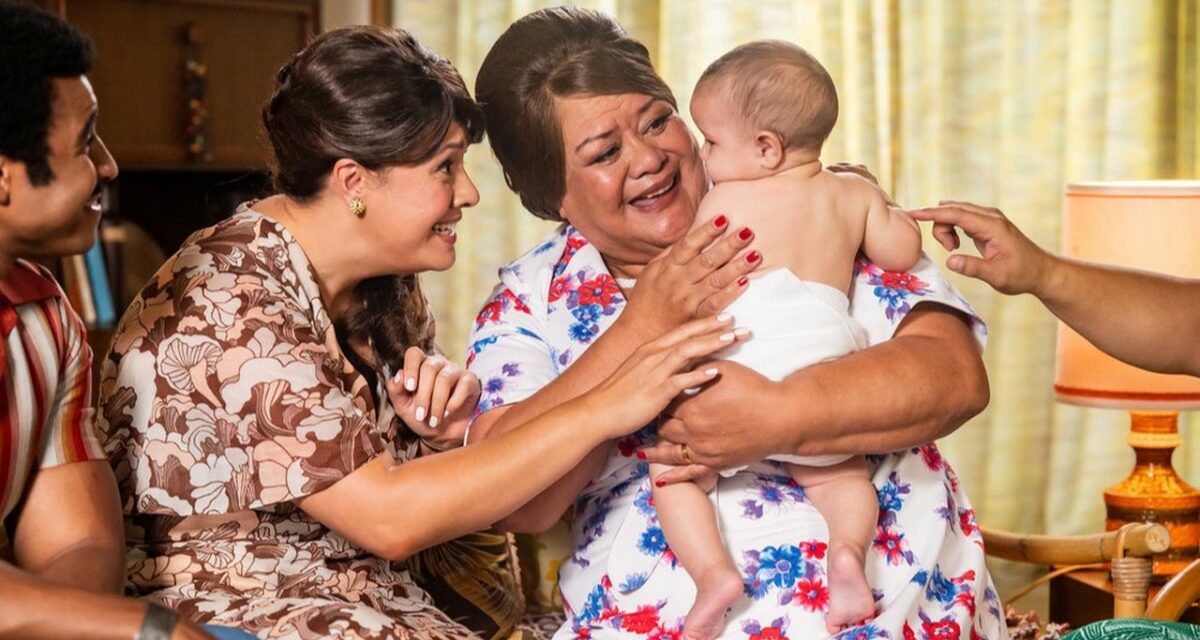 The flashback storytelling gets exponentially tricky this week, as Dwayne Johnson (in 2032) tells a story to Randall Park (playing the role of himself as a hapless former actor turned interviewer) about a time when Dwayne’s mom Ata Johnson (played by Stacey Leilua) was telling him a story in 1985 (as he’s played by Bradley Constant) about when Ata and Rocky met in the late ’60s. Got all that?

This sequence was the most amusing and engaging of this week’s episode, titled “An Understanding”, bringing some ghosts of the past to the fore as a teenaged Dwayne comes to grips with the frail, human nature of his parents, and especially the failings of his father. First up though, as is customary for the show, we check in on Dwayne’s campaign for the presidency of the United States of America.

He is just wrapping up a rally in Memphis, TN, still dogged by questions about his social media war and childhood grudge against Dr. Julian Echo, as played by Sean Astin. We’ll find out at the end of the episode that presidential Dwayne Johnson, much like when he has played “The Rock Obama” on Saturday Night Live, can only be pushed so far before breaking out the catchphrases and eyebrow. It’s actually exactly how I’d envision a real life Dwayne Johnson political rally going down.

In conversation with Park, Johnson looks back on 1985 during a time when Rocky (played by Joseph Lee Anderson) was not welcome in the apartment that Ata found for her and young Dewey. Rocky seems to be waiting out “the chill” from Ata, which he acknowledges is lasting longer than usual after he made some suspect parental decisions such as letting Dewey live with manager Downtown Bruno and failed to enroll his son into school.

Still, the wrestling business is doing all right for Rocky as he brings some money from Jerry Lawler’s promotion over to Ata regularly, and he can’t help but get his promotional game face on when Pat Patterson (played by Kiff VandenHeuvel), having recently begun scouting for Vince McMahon, arrives to have a look at Crusher Yurkov (played by Patrick Cox, and eventually to be re-named Bam Bam Bigelow). Johnson asks if Patterson will let Vince know that Johnson is still drawing crowds, but Pat responds that Rocky burned that bridge by booking himself at a Saudi Arabia show that has been referenced a couple of times in the show before. Vince took it personally and, as Rocky was under contract to the WWF at the time, Patterson believes that Vince felt he had to make an example of Rocky by cutting ties with him.

Hearing this side of the story for the first time, Dewey unloads some anger on his mom about how Rocky selfishly messed up what he had going in the WWF, missing out on early WrestleManias and dragging his family into the mess with him.

It’s here that Ata takes Dewey back to Rocky’s tough childhood which saw him leaving home at 13 years old, bouncing around in the Toronto area until he fell into boxing and then wrestling. In the late ’60s in San Francisco, Rocky worked with Peter Maivia and the show presents a “time standing still” moment as Rocky locks eyes with Ata in the crowd. He pursues her, although Lia Maivia (played by Ana Tuisila) reminds her daughter of the very strict rule against dating wrestlers, and they date in secret until Peter hears about if from a loose-lipped Haystacks Calhoun.

Once more, the show is proving that, for a sitcom, it will delve into the less-than-perfect parts of Dwayne Johnson’s family life. There is no mention made during the romantic first meeting of Rocky and Ata of Rocky’s existing marriage at the time to Una Johnson, née Sparks, and therefore nothing of Dwayne’s extended family with the two children from that marriage, Curtis and Wanda. This series has a very specific creative focus, though, and Rocky’s life outside of his marriage into the Anoa’i family is given a nod in this episode, but not much more than that.

By the end of the flashback within a flashback, you can see that Ata is talking herself into forgiving Rocky his impulsiveness once again, and Dewey is ready to accept the version of his father, his hero, who he now sees with eyes wide open as the family reunites over dinner at the apartment.

Also, for those that figured there must be more to Dwayne’s nickname of “Dewey” than a simple twisting of his name: you’re right. It has something to do with the diapers on his very young “Rock Bottom”, so check out the episode to learn this piece of trivia sure to entertain at parties.