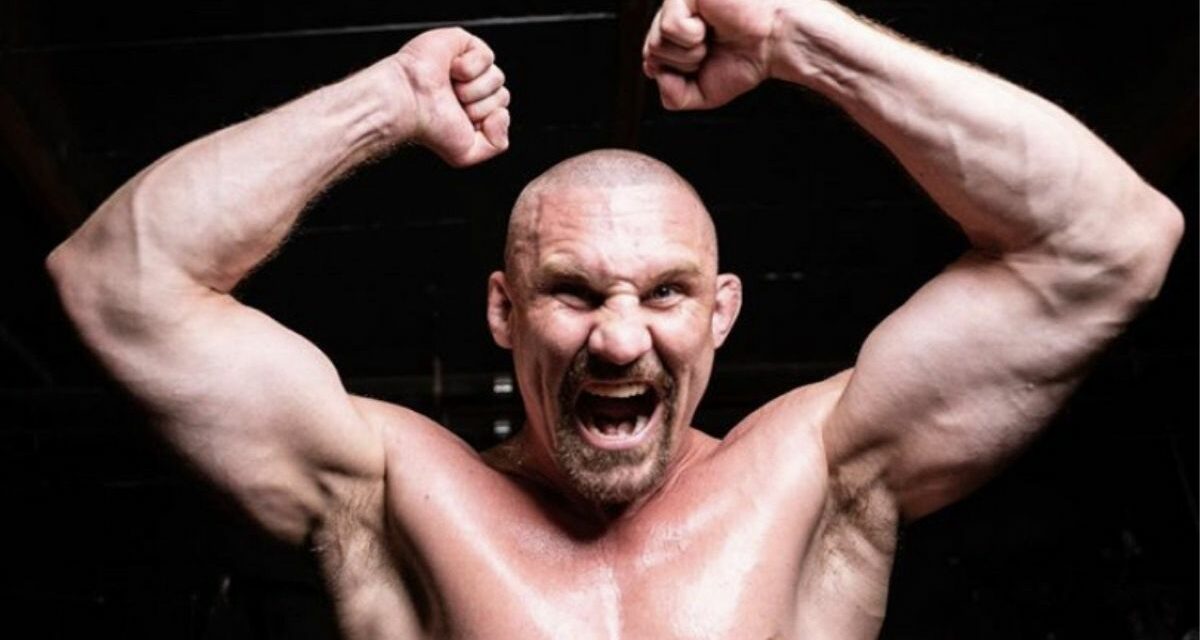 Pro wrestling and combat sports like mixed martial arts go hand in hand these days, and many like Ken Shamrock and Brock Lesnar have made successful transitions in both sports. Blake “Bulletproof” Troop is another man who is looking to garner such attention. Having successfully debuted for the United Wrestling Network United Wrestling Network, he’s looking to return back to smoke the competition for High Rollerz BJJ on Saturday, April 16th, for its 420 show.

SlamWrestling.net first spoke to the 6-foot-4, 245-pound Troop last year, and we asked how his wrestling career has been going. “I’ve had about seven or eight matches so far,” he said, “and I decided to bring this winning streak back to combat sports.”

For those unfamiliar with the promotion, High Rollerz Brazilian Jiu Jitsu bills itself on its website as “a unique, cannabis-infused martial arts show that offers funny commentary with top-level jiu jitsu.” Prior to his transition from MMA to the squared circle, Troop had his first fight with the promotion. “So I actually competed in their first event I got brought on by a sponsor because because of my personality and so forth.”

While he did not win in the match, Troop did impress those with the promotion. “I’ve been friends with Matt Stout and Bobby Howard from High Rollerz since before the first one. And because of the way I promote events and stuff, they were stoked to bring me back on board again.”

Which brings us to how he was approached for the upcoming fight. “They called me and they’re like, ‘Hey, man, we need somebody to step up for Team RVD CBD.’ ” 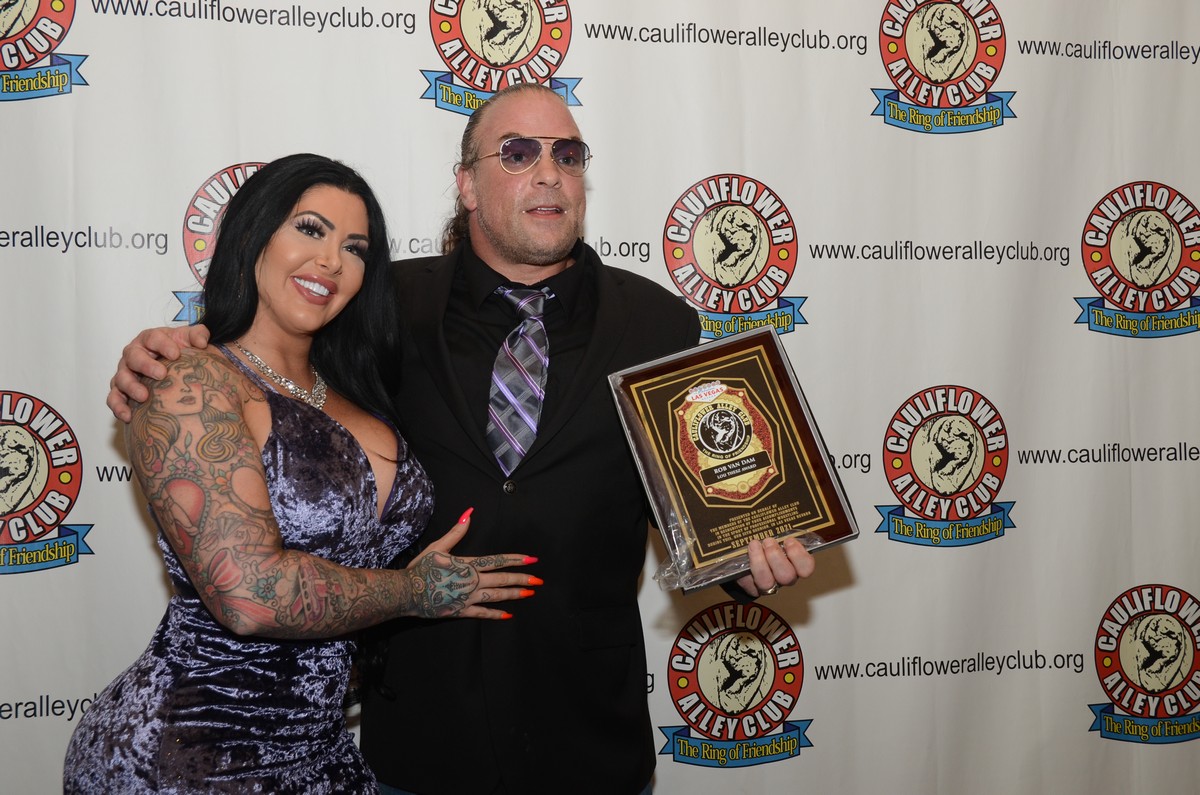 “So he’ll be walking me out to battle [in Troop’s corner].” So this wasn’t just a chance meeting with Mr. PPV for Troop. “So he lived in L.A . for a long time… he had a house in Palo Verdes, and a friend of mine who’s not in wrestling became friends with Rob,” recalled Troop. “He eventually introduced me to Rob. This is probably like… I don’t know, maybe like four years ago or so. And so we’ve been friends previously [before me getting] involved in wrestling or me that kind of wanted to do it, but not like, pursuing it necessarily.”

Troop and Van Dam stayed in touch over the years. “I’ve had his [number] in my phone for years, so it wasn’t like I was starstruck to get the call, like, ‘Hey, we need you for Team RVD.’ ”

For people not familiar with High Rollerz BJJ, what’s the best way to describe the atmosphere? “You share a joint [before the match],” Troop said, “and then after the match you share a joint.” So think the Code of Honor, but with cannabis. 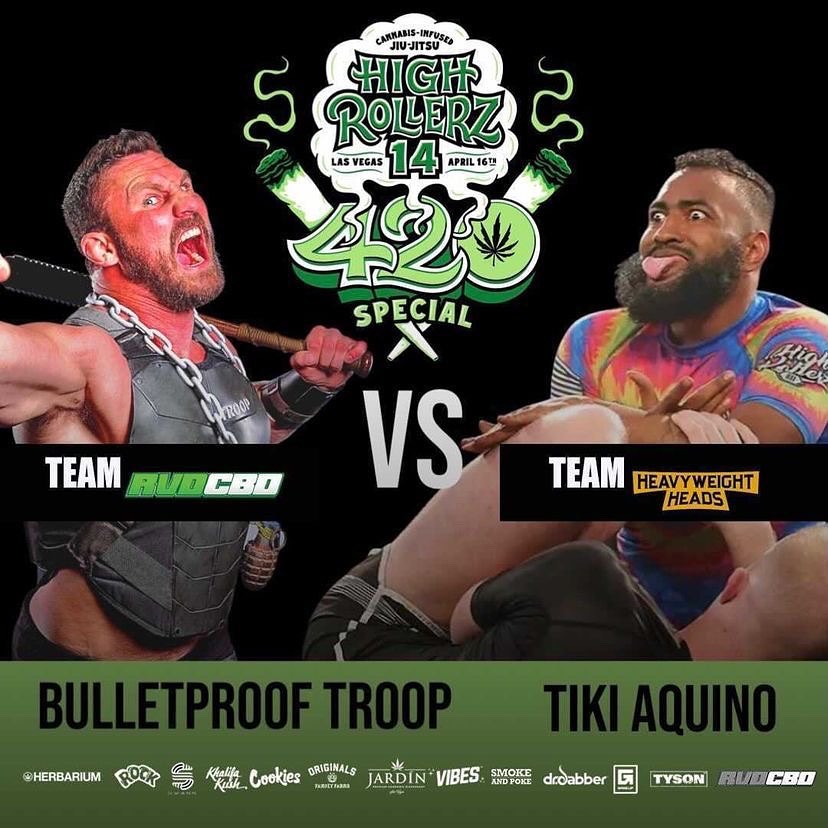 Troop with be facing Israel “Tiki” Aquino, who is part of Team Heavyweight Heads, as part of the High Rollerz event. Aquino is primarily a BJJ fighter, but Troop does have a strategy for how to beat his opponent that night. “I’m gonna go in [and] I’m gonna take him down,” he said. “I’m gonna get on top of him, and then use my top pressure to open something up and take something home.” As for specifics, Troop kept mum on that part.

Overall, Troop was excited about coming back to combat sports. “I don’t think I could have a better thing happened for my brand. Right now. It works out in professional wrestling besides to go in and compete in submission grappling, and go get a submission win,” he said. “I’m gonna go try and have fun to put on somewhat of the showmanship but I mean, pretty much once it’s game time and the bell rings, [its raining] buckets game time… which is what I’m excited for it.”

During the interview, you can hear Troop just becoming giddy at the thought of being in the ring. “I haven’t been back competing for a minute, and I’m excited to to get on the mat in that capacity.”