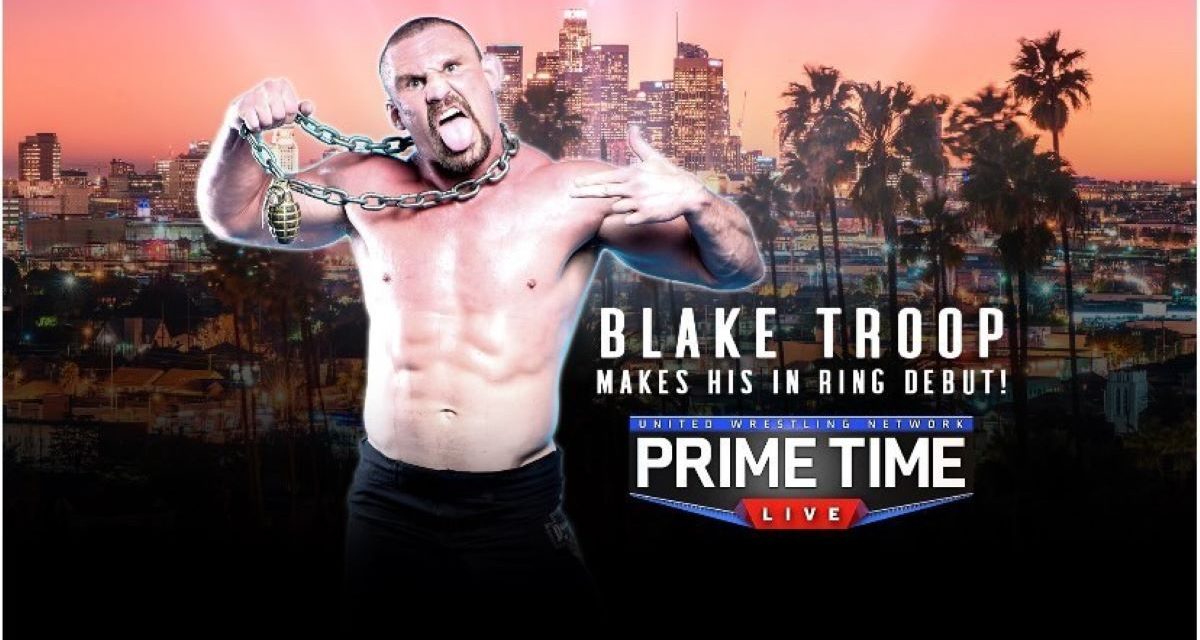 There are wrestling debuts over the years that either run the gamut of exhilarating or confusing. A wrestler may have the flashiest entrance, the best gear, hyped up music, but in the end, it’s the fans that will determine who they will cheer or boo.  But for the 6-foot-4 Blake Troop, he is determined to make it in the squared circle this October 2nd, for the United Wrestling Network (UWN), as the promotion makes its return on the FITE app with the PrimeTime Supercard 2021.  It’s an opportunity for Troop that, like his nickname, is “bulletproof.”

A mixed martial artist fighter out of Oceanside, California, with an 8-6-0 record, Troop has made his mark in matches with MMA promotions like Snake Pit Catch Wrestling, where he has medaled in competition, and Lights Out Extreme Fighting (LXF), which UWN are stakeholders. “I’ve been fighting professionally for about six and a half years,” Troop said to SlamWrestling,net. “My last fight was supposed to be Friday the 13th, March 2020. I was supposed to be fighting the main event on the FOX Sports Network for the heavyweight title.” 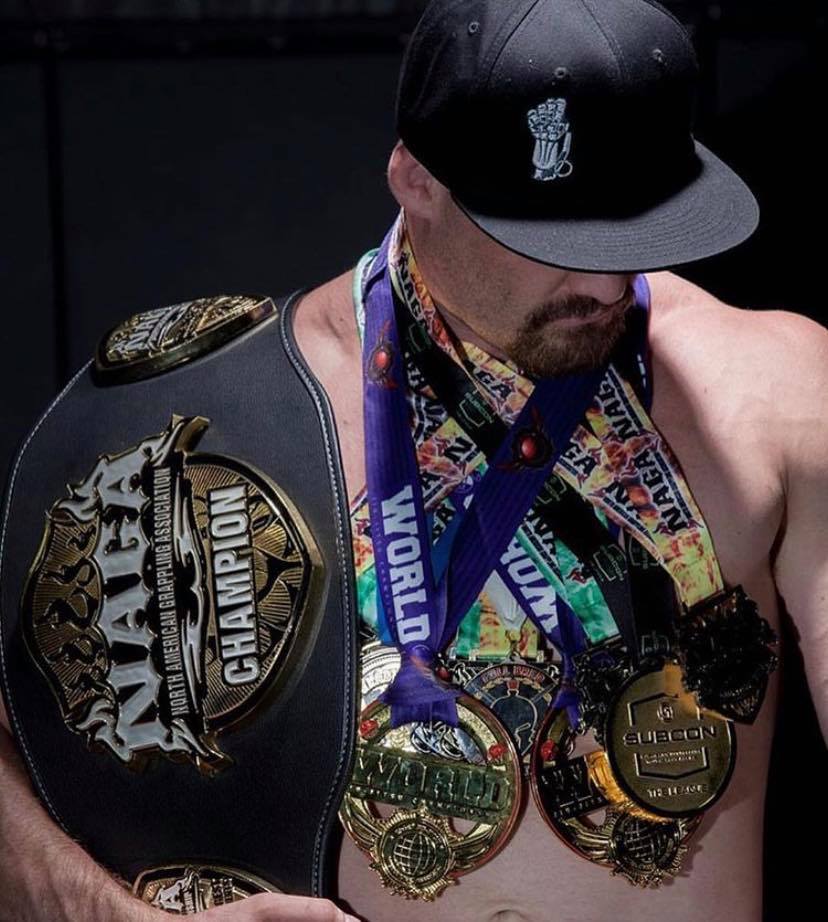 A small sample of the medals and title belts Blake Troop has earned in his MMA career. Courtesy of the United Wrestling Network.

Then COVID put a stop to that, and all combat sports for a time.

“I’’ve really had to pivot into a handful of different things,” explained Troop, “and one of those pivots and adjustments that I made was getting into doing commentary and professional wrestling for the United Wrestling Network.”

It was in late 2020 that UWN with the National Wrestling Alliance (NWA) and Thunder Studios partnered up to offer mini pay-per-view “PrimeTime Live.” Troop was the color commentator weekly, alongside Todd Keneley, and James Kincaid. But this was not Troop’s first foray behind a desk.  “I’ve already done a lot of commentary from [MMA],” said Troop, “and I was a really good commentator for fighting.”

What was the best advice Troop received from his peers during his transition to commentary? “So I was told mainly… was to be me,” he said. “And the more I tried to be me, and it took me… like I heard it initially, but it took me a while to figure out what that meant and to really go all the way into that.” 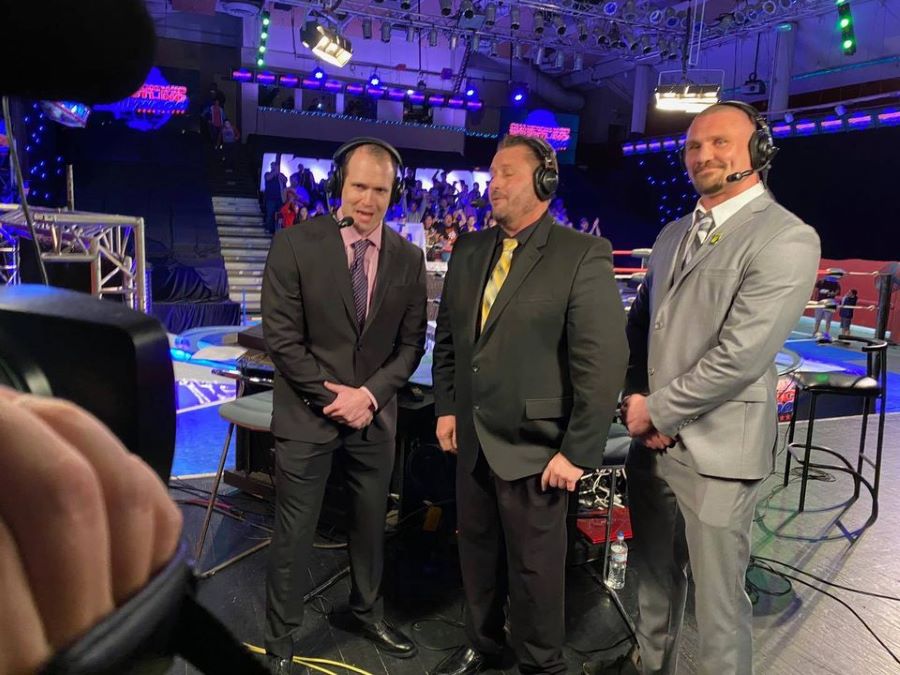 Now, Troop is making another transition, from behind the desk to the squared circle. “I have actually been training for much longer than people realize,” Troop pointed out.  “I began training about August of 2018 for a couple of years, not necessarily straight. I’d been training Brian Kendrick for a while… Joey [Kaos] of Santino Bros. I have trained with Aron Stevens.”

Recently, Troop moved out from California to Florida in January of this year to train in earnest with Matt Sydal of AEW, Jennacide of the NWA, and Chris Silvio. “She [Jennacide] is one of my main training partners,” Troop mentioned, “so she’s a girl who knows how to get in there and kick some ass.”

Troop was also very complimentary about the level of training he was receiving, especially from Silvio. “I’ve had a variety of very high level coaches that have been very successful in the business,” he said, “and they are really good at putting things down in a way that’s easy to pick up; whether we’re talking about moves or more importantly, in my opinion, things like match structure, psychology. Things making sense why we may, or may not, be doing something.”

When you talk to Troop, or watch his social media content, he comes across as a serious fighter, but also, for lack of a better term, living the gimmick that’s custom made for the sport of professional wrestling. “I’m a legitimate combat sports act as well as a personality,” he explained.  Troop even went into a bit of a promo during the interview, calling out to his “Bulletproof Troop-ers and Troop-ettes.”

“You can tell them,” Troop proclaimed, “That ‘Troop is locked, cocked, and ready to rock his first professional wrestling debut.’” 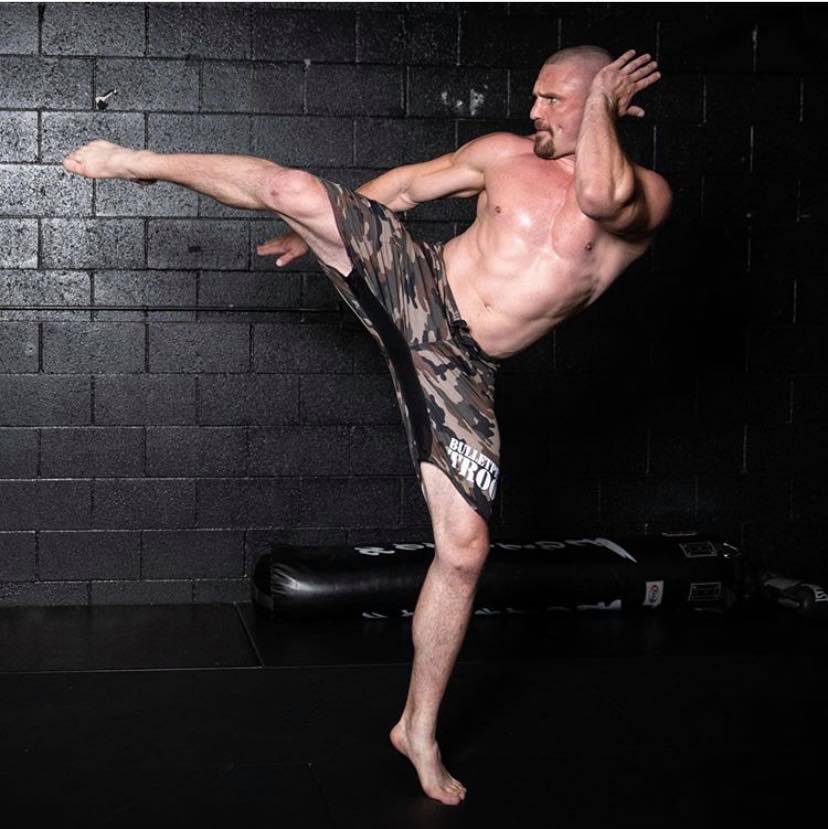 Courtesy of the United Wrestling Network

Where did “Bulletproof” come from, originally? “There’s not a story behind it; like I didn’t get shot,” Troop said. “I don’t have anything crazy like that.”

He started using the moniker mid-2016, during his MMA career. But as for the meaning behind the name, Troop provided a unique take on the subject. “What ‘Bulletproof’ means to me, is that it doesn’t mean that I don’t get hit with problems and bulls***, or whatever.  I still get hit, myself, but I keep moving towards my objective. I don’t stop. Now being ‘Bulletproof’ means, to me, is getting to where I’m trying to go, despite the obstacles and the things trying to hold me back.”

Troop will have the chance to put all those skills to the test in his debut match, and he is extremely enthusiastic about that night. “I’ve waited a very long time to make my professional wrestling debut so that I could come in and knock it out of the park,” Troop said, “and I’m not in any hurry off to move too fast through the rankings or anything in professional wrestling. Because one of the things that I think really impacted my [MMA career] negatively is that I went after opportunities that I wasn’t necessarily completely prepared for. As a result, I had to fight my way out of a hole in my career instead of coming out f***ing extremely strong.”

Troop continued to explain, “I’m much more prepared for these big opportunities. I’m going to take my time climbing my way up, instead of rushing to get to the top.”

Whether PrimeTime Supercard will have Troop throwing, as he calls them, “hell-bows and hand grenades,” he is clearly excited for what comes next this weekend.  “I’m excited to start the next chapter of the ‘Bulletproof’ Troop saga.”