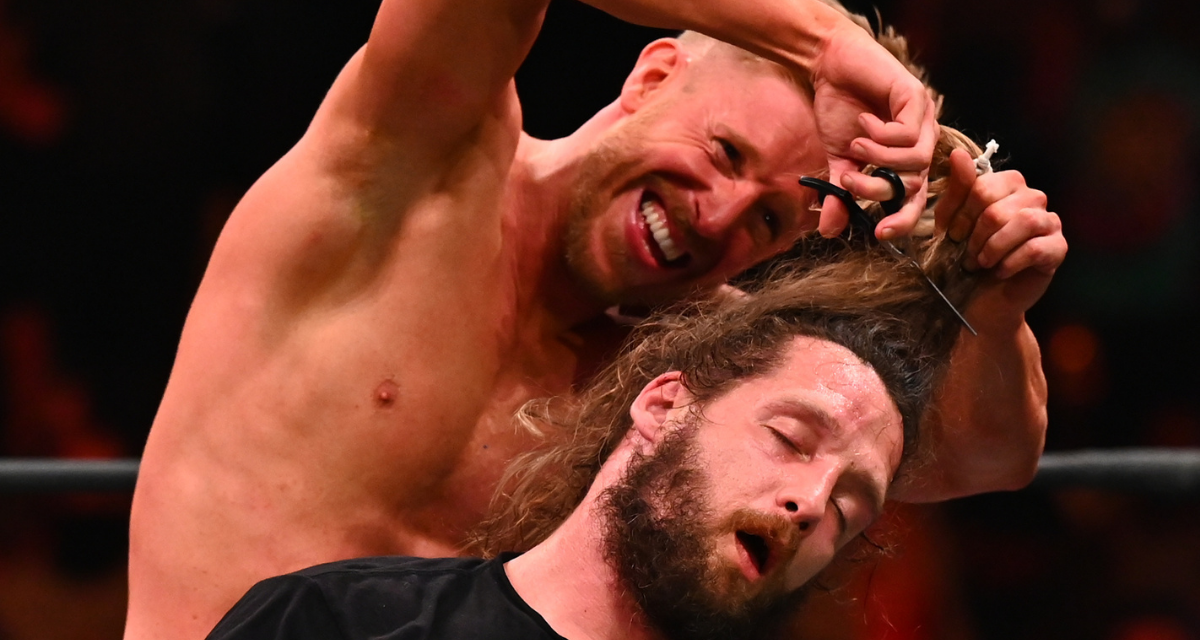 Well, last time I covered Rampage CM Punk showed up in what was the worst kept secret in wrestling. I don’t think anything of that magnitude will be happening, tonight, but Bryan Danielson is wrestling. So that’s a win.

Danielson backs Jackson into the corner, but is taken down with a side headlock. Nick tries to bait Danielson, but he doesn’t bite. Jackson messes around on the floor, so Brian takes him out with a suicide dive. He follows with a shotgun dop kick in the ring. The American Dragon lock in a surfboard and transitions into a dragon sleeper. Jackson gouges the eyes to escape.

Jackson bounces off the rope; hitting a massive lariat. Bryan catches Jackson coming off the top rope with a butterfly suplex. Bryan starts to manipulate the joints of Jackson. Danielson flies into the corner with the knee, but Jackson is able to get out of the way. Brian spills to the floor, allowing Matt to get in some cheap shots.

After the commercials, Jackson unloads on Brian wit kicks. Danielson shrugs the kicks off, leaning into the contact. Danielson rises to his feet and spits in Jackson’s face. He unloads with a combination of kicks. He ducks a clothesline and hits a flying clothesline on Nick. Danielson unleashes the kicks, but can’t get the pin after a round kick.

Brian with running knee strikes in the corner, but runs into a superkick. Jackson can’t get the pin. Jackson looks for the 450 splash, but Brian gets the knees up and applies the LeBell lock. Jackson is able to break the hold by getting a foot on the ropes.  Bryan misses a kick and catches the ring post. Jackson takes advantage with a release German suplex on the apron. He follows with a corkscrew flip over the rope to the floor on Brian. In the ring he applies the scorpion deathlock on Danielson. Jackson lines up a kick on Brian on the apron, but Danielson ducks and Jackson kicks Brandon Cutler right in the face. Danielson hits Jackson with a German suplex on the floor. In the ring, Danielson drops the hammer with strikes and locks in the Cattle Mutalation. Jackson taps.

After the match, The Elite run down with Jurassic Express and Christian Cage following. Jungle Boy locks Adam Cole in the Snare Trap. Kenny Omega tries to make the save, but gets put in the LeBell lock. Both Cole and Omega tap, but there’s no ref.

Powerhouse and Hook let Brian Cage know that Ricky Starks has a message for him. Starks essentially says he is better than him. Starks then joins the commentary team.

CM Punk wants to take on the best in AEW. Anyone who would like to step up with be put to sleep.

Rosa ducks a clothesline from Cargill and chops her across the chest. Rosa with a diving cross body but Rose catches her and slams her to the mat. Cargill breaks up the pin. Cargill and Rose trade shots and Cargill takes her down with a pump kick. A clothesline sends Nyla over the top to the floor. Thunda Rosa connects with a missile drop kick as we go to commercial.

After the break, Rosa with a low drop kick on Cargill. She sets up a trashcan, driving into Cargill’s face. Nyla Rose breaks up the pin. Rose drops Jade with neck breaker and locks in a single leg crab. Thunda Rosa breaks the hold with a drop kick. She misses a drop kick on Rose in the corner. Nyla drags her to the apron and sets her up on the top turnbuckle. Rosa slips out and powerbombs Rosa through on table on the floor. Rosa tries to rolls Nyla into the ring, but is ambushed by Jade Cargill and chair shot. She takes Rosa apart with chair shot and then covers her to get the win.

Malakai Black wants Cody Rhodes to know the black mist comes from heart and has seeped into every part of his part. He wants it to eat him alive, so Cody will know what it take to beat him.

Orange Cassidy doesn’t realize that his hair is on the line tonight against Jack Evans. He has no idea what is going on. Once he finds out he will lose his hair if he loses; he decides he just won’t lose.

Evans looks for a quick roll up, but Cassidy kicks out. Orange dodges leaping front kick and misses. Cassidy with the light kicks. Matt Hardy pulls Orange out of the ring with the ref distracted and lays him out. Evans follows with a corkscrew kick. He then hits a 450 splash off the apron.

After the commercial break, Orange with a cross body off the top. Evans with a Michinoku driver, but only gets a two count. Cassidy with a DDT and then goes up top. He hits a diving DDT, but Evans kicks out. The Hardy Family Office walk out on stage. The Butcher, Blade and Bunny come down the ramp, but and intercepted by the Best Friends. Private Party walks out, but the Dark Orde reinforces the Best Friends. Orange Cassidy nails Jack Evans with the Orange Punch and covers to get the win.

After the bell, the Dark Order keeps the HFO at bay. Matt Hardy decides to sacrifice Jack Evans and orders everyone to the back. Evans gets his hair cut and shaved off by Orange Cassidy.

AEW put on a solid one hour wrestling show. The first match could easily been the main event. There’s only so much that can be done in an hour, but as long as the wrestling is solid that is all that matter.