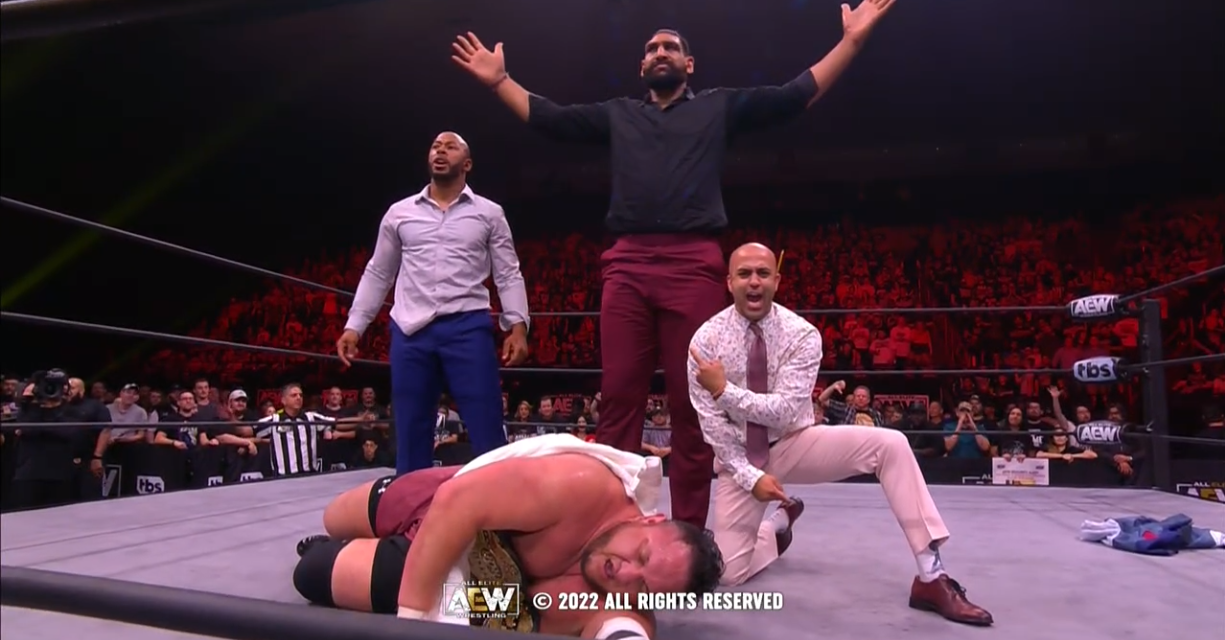 There is quite a wait until the next AEW PPV, but we are getting another Battle of the Belts this Saturday. That show is only an hour long, so all the AEW belts won’t be battling. Tonight, the AEW Tag Team titles are on the line and get ready for that forbidden door to swing open. The ROH TV title will be defended, tonight. Dynamite is ready to pop off, so let’s get right to the action.

The two trade chops to open the match and then start raining down punches. Penta with a super kick. Punk wants an GTS, but Penta blocks and counters into an ankle lock. Punk with a rising knee strike in the corner. Penta hits the sling blade, but only gets a two count. Penta connects on the suicide dive to the floor. Back in the ring, Punk is cut down on the top turnbuckle. Penta delivers a head butt an then stomps away at Punk in the corner. Punk with a top rope hurricanrana, but gets the GTS blocked. Punk locks in the anaconda vice, but Penta is able to get to the ropes.  The two trade shots on the ring apron. Penta wants a piledriver, but Punk blocks it and connects on a roundhouse kick. Punk with a springboard lariat and connects with a knee strike in the corner. Punk calls for the GTS. Penta blocks it, landing on his feet. Oscura wants to snap Punk’s arm. Punk counters into a pin. Penta gets caught in mid air and Punk hits the GTS. He covers and gets the pin.

Earlier today, the Jericho Appreciation Society landed in their own private jet. Eddie Kingston, Santana and Ortiz were waiting and jumped 2.0.

Jungle Boy locks up with Bobby Fish and takes him down with a shoulder block. Luchasaurus runs into a boot from Kyle O’Reilly. A dragon screw over the ropes cause Luchasaurus to fall to the floor. O’Reilly runs into a knee strike and Jungle Boy get the hot tag. A low bridge sends Fish to the floor and JB follows with a a suicide dive. Fish and O’Reilly take off before JB can crash into them again, so Luchasaurus with a moonsault that connects. Fish grabs Jungle Boy on the apron, allowing Kyle to use the dragon screw over the ropes. Luchasaurus tags in, dropping Fish and KO with big fists. Fish O’Reilly takes a release German suplex and Fish eats a tail whip. Luchasaurus with the double chokeslam. KO kicks out of the pin after a moonsault press. Jungle Boy super kicks KO off the apron and hits Fish with an elbow drop. KO makes a blind tag, suplexing JB and then double teaming him. O’Reilly locks in the cross arm breaker. Jungle Boy is able to get to the ropes to break the hold. Luchasaurus gets KO on his shoulders, but Fish stops the Doomsday Device. Fish hits JB with an avalanche falcon arrow, but the pin is broken up by Luchasaurus slamming KO onto them. Fish takes another tail whip and gets hit with the Jurassic Express. Jungle Boy covers and gets the three count.

After the bell, O’Reilly and Fish attack the champs with a steel chair. FTR walk out on stage. Fish and O’Reilly jaw at them before walking off to the back.

William Regal is so happy to be with the Blackpool Combat Club. Bryan Danielson is excited to fight with Wheeler Yuta against the Gunn Club.

Tony Schiavone is with Jamie Hayter and Toni Storm who will facing each other in the fist round of the Owen Hart tournament. Hayter tells Storm that this will be her crowning moment. Storms just smiles and walks away.

Dean is dressed for battle tonight; jobber no more. MJF can’t get his jacket off; the zipper must be stuck. Spears tries to help. MJF attacks Dean from behind; it was all a set up. He takes his jacket off whips Dean into the corner. Uh-oh; security has been laid out backstage. Wardlow is in the building. MJF throws Dean to the floor. MJF poses against the security barrier. Wardlow walks up behind him and chases Max up the ramp. Spears with a chair shot, that Wardlow shrugs off. Security runs down, but Wardlow dispatches them with ease. The number finally overpower Wardlow. MJF tries to talk his way out of getting counted out. The ref doesn’t take the bribe and counts to ten. MJF is counted out.

After the match, MJF tries to strike the official, but Spears hold him back. Backstage, Wardlow is still taking out security,

Malakai Black wants us to be afraid of the dark.

There’s lesson to be learned here tonight. That lesson is to take out part of the faction you are facing immediately before the match. Sure 2 point 0 got taken out earlier in the day, but they were able to recover and interfere in this match. The interference allows Jericho to hit Kingston with the bat. Garcia makes the cover to get the three count.

After the bell, the Society beat down all three men in the ring.

Backstage, MJF expresses his displeasure over losing to Cpt. Dean. Smart Mark Sterling reads Wardlow’s contract and MJF has the power to book him and he will take advantage of it. Next week, Wardlow will face the Butcher.

Jade Cargill is closely watching this match in the back. Shafir makes short work of Blue, in front of the “Baddie Section” Shafir gets Skye to tap in an arm triangle.

Lexi Nair tries to get an interview with Hook, but Mark Sterling wants to know why Tony Neese isn’t getting an interview. Danhausen pops up again to unsuccessfully curse him.

Ethan Page isn’t pleased that Sammy Guevara begged management for a TNT Title. Scorpio Sky will face him a the Battle of the Belts.

How is this match not on Rampage? Isn’t that Swerve’s house? Well, they don’t have a chance now, especially since Ricky is in his hometown. Lee blocks a tornado DDT. Taz comes to the ring and trips up Keith Lee. This allows Hobbs to hit a spine buster and cover to get the win.

Thunder Rosa talks to Tony Schiavone about defending her title on Saturday. Nyla Rose interrupts with cake. Rosa smashes the cake in her face. A blinded Rose decks Vicki Guerrero, but then finds Thunder Rosa and slams her into a case.

The two trade chops. They eventually start throwing forearms, but then go back to the chops. The two keep trading blows until both men have fire engine red chests Suzuki with an arm bar through the ropes. He breaks the hold at four. Joe locks in an abdominal stretch. Suzuki rolls to the ropes. Suzuki thinks pile driver, but instead goes back to the chops. Suzuki locks in the sleeper, but Joe powers out. Jay Lethal and Sanjay Dutt watch from the crowd. A drop kicks takes Joe off his feet. Suzuki wants the Gotch Piledriver, but can’t hoist Joe up. Joe wants the Muscle Buster and hits it. Joe covers and get the three count.

After the match, Lethal and Dutt tell Joe that they have a gift for him as promised. Lethal opens the box and he has the old Stone Cold salute for him. The lights go out and this is the real present. Satnim Singh attacks Joe from behind. Satnim is a monster of a man. A basketball player they tell us. This guy could have given Shaq a run for his money. They beat down Joe in the ring until Jay hits the Lethal Injection. See you is seven days!

Another night of solid wrestling on Dynamite. CM Punk and Penta Oscura set the tone for the show. Jurassic Express and ReDRagon put on a PPV quality match. The MJF-Wardlow story took another step. In the main event, Samoa Joe and Minoro Suzuki put and a chop clinic. This match could have been longer. The “surprise” assailant that Jay Lethal sprung on Joe would have meant more if anyone knew who this giant was.