A Final PowerrrSurge towards the NWA Crockett Cup 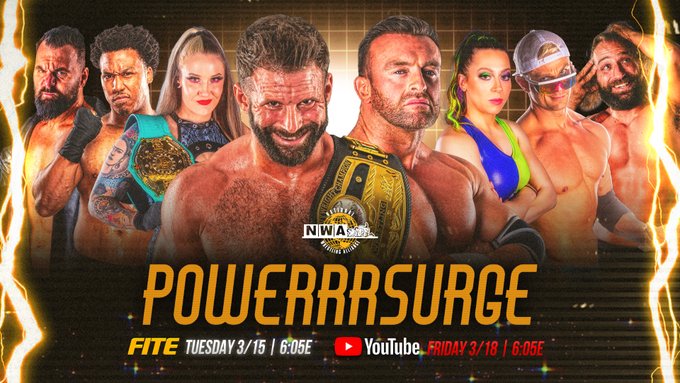 As the National Wrestling Alliance gears up for the double pay-per-view, we have some matches and a lot of pondering which tag team is going to be able to end up with the vaunted Crockett Cup.  Plus, we have some matches interspersed throughout this NWA PowerrrSurge episode, so let’s step Into The Fire, and fan the flames of fandom.

The show starts with Joe Galli, as he has the NWA CEO William Patrick Corgan and the NWA Head of Talent Relations, Pat Kenney.  They run through teams seeded one through eight of the Crockett Cup.  Personally, I already went through what to expect with the listed tag teams, so take this opportunity to peruse it again.  The only new thing during this show was that Doug Williams has chosen Harry Smith to be in his corner, and the son of the British Bulldog, Davey Boy Smith, is going to be an interesting team during the first round of the bracket.

Galli says more will be addressed as they go to the First Match of this PowerrrSurge, heading to the GPB Studios in Atlanta, GA, between two intriguing junior heavyweights…

It’s kinda cool that we at SLAM! Wrestling had the chance to interview both Rinauro and Spade.  Galli calls Rinauro “Sinister Sal” as he is still under the thrall of the Sinister Minister.  I gotta say; homeboy is a tad unhinged (and that’s saying a lot coming from me, since I deal with a weird crowd currently).  While Rinauro uses every opportunity to cheat to win, Spade is able to counter “Sinister Sal.”   At one point, Spade nails Rinauro with a forearm, and then a dropkick to a sliding clothesline for a two count.

Rinauro does everything to Spade’s hand from breaking his fingers, stomping on them, and biting them.  He keeps up the offense with a basement dropkick for a two count, and then follows up with stomps to the mat and tries to put Spade away, but still gets a two count.  Rinauro sends Spade to the corner, and rushes, but J Spade sends him into the Sky High to get the win.

Your Winner via Pinfall:  J Spade

We go back to Galli, as he talks with Corgan about the aftermath when Trevor Murdoch lost the Ten Pounds of Gold. Corgan says he’s devastated, and that he feels he let himself down and the NWA down. After the match, Corgan spoke to the medical staff in attendance, and they said Murdoch is not cleared at this time.  Since Aldis stepped up as a challenger to Cardona, Corgan notes that Murdoch gave his full support to The National Treasure. While Corgan doesn’t like Cardona, he does congratulate him to winning in the ring. Galli ponders the future of the former champ, and Corgan thinks Murdoch will go back to the drawing board to see how to get back Heavyweight title belt again.

But let’s go to never before seen women’s match, and that match is between…

At first, I thought that Kate was Hexed, and that this was going to be a squash match.  I’m glad I didn’t, because Kate was more than a match for Kay.  At one point, Kate gets double knees to Kay’s face, followed by a wicked Shining Wizard to cover for a two count.  Kate tries again by stacking up The Hex member for another two count.  Kate has her in a side headlock, but Kay reverses to her own side headlock, Kate gets a jawbreaker to break the hold.

She sends Kay to the corner, and mocks Belle at ringside.  That proves to be in error, as she rushes to the corner and Kay gets a boot up, and fires back with clotheslines.  Kay gets her in the AK-47, but Kate wriggles out, and gets her feet on the top turnbuckles.  She kicks Kay away, and goes high risk with a moonsault, but she misses the target. Kay gets her back in the AK-47finisher, and that’s all she wrote.

Your Winner via Pinfall:  Allysin Kay

We go back to Galli, Corgan, and Kenny discussing the Crockett Cup, seeds 9-16.  Again, read what I covered, but the only new development is that in the number fifteen slot with be the Tag team of The Now, comprised of Vik Dalishus and Halle Collins.  Mostly, these two have worked in the indies for promotions like NorthEast Wrestling, and this will be a huge opportunity for both men.  Of course, they face The Briscoes in Round One of the tournament, so…yeah, good luck with Dem Boys.

Galli is joined with The Fixers, Jay “The Boss” Bradley and “Wrecking Ball” Legurtsky. Bradley talks about how they decimated the “OGK nerds”, and how they plan to fix tag team wrestling in the NWA.  Bradley talks, and again, Legurtsky channels “Ogre” from Revenge of The Nerds.

If anybody from SLAM! gets a chance to interview those men (and I use the term loosely), then I hope to the gods they bring noise cancelling headphones.

Speaking of big mistakes, that brings us to the final match of the night, featuring…

Judais (with The Sinister Minister) vs. “That Dude” Jamie Stanley

Stanley pie faces Judais, and the monster returns the receipt with a clothesline to back of his neck.  The rest of the match has Judais spending time rearranging “America’s Jawline.”  At one point, Judais walks around carrying Stanley’s limp carcass, and he throws him with a fallaway slam.  He also gets Stanley in a double arm suplex to the corner turnbuckle.  As Judais keeps administering the beatings, Stanley stuns him on the top rope, and he scrambles up top to get a crossbody.  Judais is laid out, and as Stanley hits the ropes, the Priest of Punishment zombie sits up not unlike another Deadman of yore, and “That Dude” delivers a kick to the head to send him back down.

Stanley, unwisely, goes for a cocky one boot cover, and he gets a one count. He goes for an elbow drop, and Judais moves away, and gets Stanley in a goozle to a choke slam.  The end comes in the form of the Crucifixia finisher, and it’s so long Stanley, as Judais pins decisively for one, two, and three.

Your Winner via Pinfall:  Judais

Galli is now with the new NWA Heavyweight champ, Matt Cardona, and the challenger Nick Aldis, as they meet face to face before the Crockett Cup. Galli asks Cardona on his thoughts about his first title defense, and he says it was a tough match when he faced Murdoch.  Cardona sneers that he is going to save the NWA by taking the title from people like Harley Race.

Aldis is seething as Galli addresses him, and The National Treasure talks how he and Tim Storm brought back the heritage of the NWA, and how other wrestlers tried to step into the limelight to challenge for the Ten Pounds of Gold.  After he lost the belt to Murdoch, Aldis talks about stepping back while the new champ held the gold.  Aldis does agree with Cardona that NWA needs saving… from people like him that wants to destroy the tradition and heritage of the National Wrestling Alliance.  He promises that it will be saved by the real champion.

Cardona says his celebration was ruined by Aldis, and he wants a special referee that night so there won’t be any funny business.

(Author’s Note:  His wish came true, as Jeff Jarrett will be the special guest referee on night two of the PPV.)

There’s really no need to rate a show that is more of a highlight reel, but it does showcase the big events they are planning to pull out at the PPV on Mar 19th & 20th.  If you haven’t already, get your subscriptions at Fite.TV now, as this looks to be a fantastic event.  We’ll have more coverage in the days ahead, but for now… we’ll see you this weekend for The Crockett Cup!