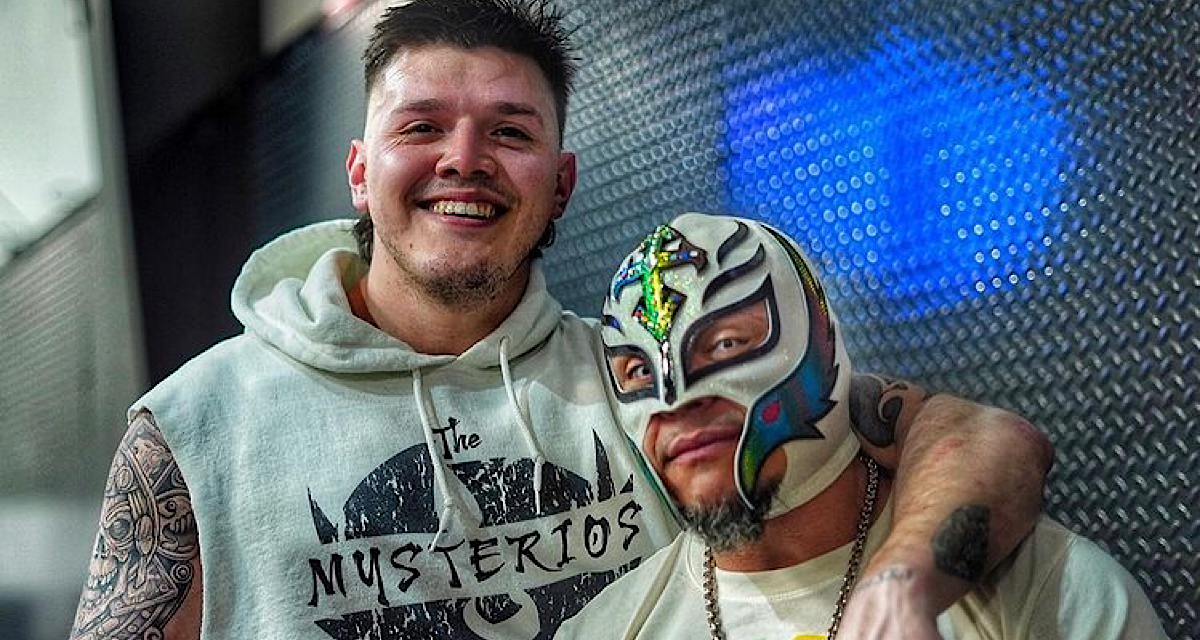 North American Champion Carmelo Hayes and Trick Williams are on commentary, as the in-ring competitors fight for a shot at NXT Stand & Deliver’s multi-man ladder match. Legado del Fantasma is ringside to Escobar’s advantage, and he retains control throughout picture-in-picture. Grimes makes the comeback and hits his signature Spanish Fly, but in a fluid motion, Escobar reverses the Cave In with the Phantom Driver.

A package from Io Shirai and Kay Lee Ray stake their claim at winning the Women’s Dusty Cup. Their opponents Wendy Choo and Dakota Kai are watching, but Toxic Attraction storms in looking for Cora Jade, who has stolen their championship belts.

A-Kid from NXT UK makes his NXT US debut, yet his entrance isn’t broadcasted; a pre-match vignette does a solid job in presenting the “Spanish Sensation” instead. He holds his own against the highly-underutilized Kushida, and a springboard DDT gives A-Kid the pinfall victory. Next week, the victor faces Grayson Waller to qualify for the North American Championship multi-man ladder match.

Rey and Dominik Mysterio are in the building, interrupting Santos Escobar’s backstage interview and his claim of being “the greatest luchador of all time.” What vocal critics argued from the start comes true, as Dominik challenges Legado del Fantasma in his first NXT matchup.

“Sarray not even able to transform,” says commentary as Stratton blindsides her opponent. Sarray is in her school uniform, meaning she supposedly literally “transforms” into her wrestling gear through the entranceway. But with Stratton’s attack and twisting splash, the win goes to “Daddy’s Little Rich Girl.”

Gunther confronts LA Knight in the locker room, complaining about the latter’s big mouth. Knight says, “I think the word you’re looking for is charisma. If you just look around a little bit, you might find it. It’s called sports entertainment. You got the first half of that. I am both.”

In the backstage area, Cora Jade suckers Jacy Jayne into a cage, and somehow an invisible NXT cameraman as well. They make movies, pal.

Tommaso Ciampa enters the ring to reflect on his NXT career. He speaks on getting the ball and running with it during his original NXT Championship run: “We were telling everybody, ‘Yeah, Tommaso Ciampa can be the guy.’” To right the wrong of relinquishing his title to neck surgery, Ciampa found — but fell short of — his “fairy tail ending” of walking into Stand & Deliver with the championship. “For the last seven years… thank you,” says Ciampa to a standing ovation. But Tony D’Angelo soils the farewell, proposing one final matchup at the aforementioned event. They shake hands, and D’Angelo gives a low blow: “At NXT Stand & Deliver, I become the new don of NXT!”

The competitors make their entrance together and reluctantly shake hands after months-long bickering over men. Speaking of which, Duke Hudson and Dexter Lumis appear at ringside, and with that distraction, Hartwell gets the roll-up victory. “It’s a smooch-off” says commentary as the couples go at it.

Cora Jades traps Gigi Dolin inside a garbage dump: “Two down, one to go.” There are seemingly more Toxic Attraction segments every week than women’s matches themselves – which, that, is even a lot.

Good lucha things are enacted to a hot crowd, as Raul assists a fledgling Dominik. Fallon Henley, Brooks Jensen, and Josh Briggs help even the odds ringside, and Dominik puts it away quickly with a 619 and Frog Splash. “Expect the unexpected Tuesday nights on NXT,” commentary puts it.

“For Scott Hall, his influence and his impact will be felt for life,” says Vic Joseph. A video package commemorates the career of the late great: “Hard work pays off. Dreams come true. Bad times don’t last, but bad guys do.”

Cora Jade’s movie production continues, and Mandy Rose (and an invisible cameraman) are hiding in her car. Rose gets the upper hand, and Toxic Attraction gets their belts back — finally.

The Creed Brothers and Malcolm Bivens demand to meet their attackers — and for the record, Julius and Brutus give great first impressions on the live microphone. MSK and Imperium both appear, and the latter team puts their championships on the line at NXT Stand & Deliver in a triple-threat tag.

Cameron Grimes reflects on tonight’s loss: “I told my father — the very last thing I got to tell him was that I signed to NXT, and that I was gonna be a champion. But here we are three years later, and all I keep doing is disappointing.”

Knight works the main-roster style so naturally that it’s only a matter of time. As practically all NXT call-ups do, the tradition of getting through Ziggler first remains in place. The NXT Champion controls throughout picture-in-picture, but Knight reverses the Fameasser with a powerbomb to initiate the comeback. Meanwhile, former champion Bron Breakker arrives at the building as Knight delivers his signature box-jump superplex for two. In an incredibly deflating finish though, Knight runs into the turnbuckle and a superkick for a clean defeat.

Breakker heads straight for the ring, clocks Robert Roode, and challenges Ziggler for the NXT Championship. “Breakker wants his rematch at Stand & Deliver. Will Ziggler steal the show, or will Breakker reclaim his gold?”

Monday Night Raw’s crew, especially the Mysterios tonight, have injected a ton of energy into NXT. The main roster mixing it up with NXT is consistently great viewing, and it should have been done like this three years ago.