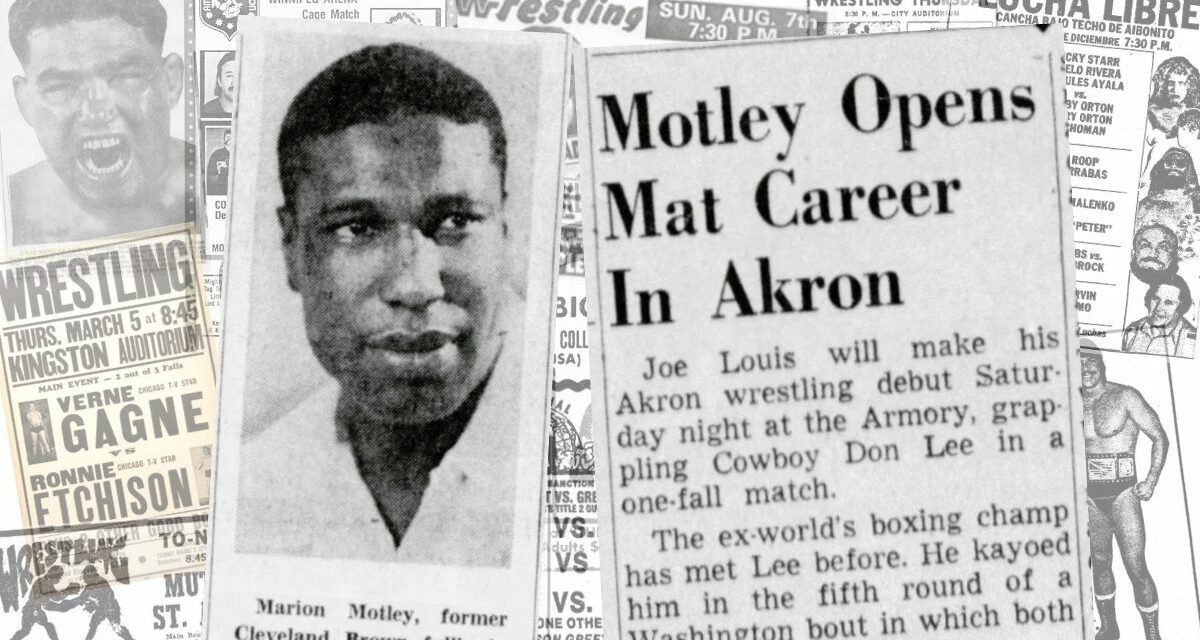 In November 2021, I reviewed a book, The Forgotten First: Kenny Washington, Woody Strode, Marion Motley, Bill Willis, and the Breaking of the NFL Color Barrier, where I tied in the book with the wrestling days of the great Woody Strode.

Check out that review — Wrestling’s Woody Strode big part of ‘Forgotten First’ football book — and come back if you like!

What I didn’t know about was the brief pro wrestling career of Marion Motley.

Sent a clip, and being a long-time fan of the Cleveland Browns, where Motley was a superstar, I had to look into it.

The verdict is that Motley’s career as a pro wrestler didn’t last very long.

Backing up a bit, Motley was a star in high school in Canton, Ohio, which is where he’d end up, enshrined in the Pro Football Hall of Fame in 1968. While in Canton, Paul Brown saw him play, and, later coached the fullback at the Great Lakes Naval Training Station during World War II.

When Brown established the brand-new Cleveland Browns in the All-America Football Conference in 1946, he brought in Motley — then 26 years old — and Bill Willis, two African-American players when there hadn’t been any in pro football for decades. (Out in California, Woody Strode and Kenny Washington were two more black players re-breaking the color line that same season.)

The Pro Football Hall of Fame described what made Motley great:

Motley, with his powerful running on Cleveland’s famed trap and draw series, made the Browns’ ground game go, but he is also credited with vital contributions to the Cleveland passing attack, because his blocking for quarterback Otto Graham was exceptional.

At 6-1 and 232 pounds, Motley was an imposing figure. The constant threat of him hurtling up the middle kept the defenses honest. Marion was the AAFC’s all-time rushing leader and also led the NFL in ground gaining in his initial season in the league in 1950. That year, in a game against the Pittsburgh Steelers, the powerful Motley rushed for 188 yards on just 11 carries for a 17.1 yards-per-carry average.

In his nine professional seasons, he amassed 4,720 yards on 828 carries for an amazing 5.7 yards-per-carry average. When he retired Marion held a host of Browns’ club records. In addition to be elected to the Hall of Fame in 1968, Motley was named in 1994 to the NFL’s 75th Anniversary All-Time Team.

Motley’s knees were an issue. He retired from football and sat out the 1954 season. “Motley, slowed by knee injuries for several years, announced his retirement prior to the Browns’ first league game in 1954. During the exhibition season, his knee ailment failed to respond to treatment and he saw only minutes of action,” reads one report.

For the 1955 season, Motley tried a comeback, but was traded to the Pittsburgh Steelers for Ed Modzelewski. He got into seven games for the Steelers, as a linebacker, and was released before the end of the season.

Now for the wrestling.

It’s evident Motley had a bit of a restless streak, and newspapers frequently noted his job changes. For a short time in 1956, that gig was pro wrestling.

His debut appears to be on a card in Akron, Ohio, on April 28, 1956, where he faced Frank Hurley. The promoter of the territory at the time, was Al Haft, out of Columbus, Ohio. Notable on the card is the former World boxing champion, Joe Louis, wrestling; “The Brown Bomber” had often been a referee too.

A syndicated sports column from that month noted that “Joe Louis will team with ex-footballer Marion Motley for a wrestling tour.”

There are just a handful more matches of record for Motley:

Later, he appeared to have refereed on occasion: 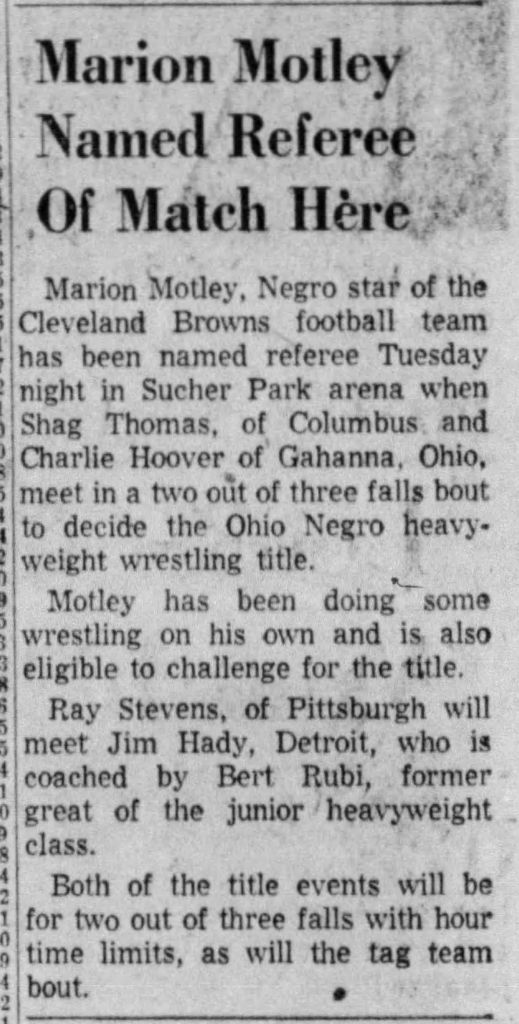 No interview or even a columnist questioning Motley’s move into wrestling could be found.

There were notes, however, that Motley had run a bar, then joined the US Post Office (1958), and then became a special representative for Jas. Barclay & Co., Ltd., selling alcohol. Motley also worked for Miller Excavating in Suffield, Ohio, the Ohio Lottery, and for the Ohio Department of Youth Services.

He tried to get into coaching on the Browns in 1965 but was rebuffed. Motley was always outspoken by the lack of opportunities given to African-Americans, especially in pro football — so Brian Flores’ recent lawsuit against the NFL for its hiring policies is hardly new.