Before becoming one of the first big, black movie stars — thanks in large part to legendary director John Ford’s faith in him — Woody Strode was a star on the gridiron. Just ask fans of the Calgary Stampeders. Strode almost singlehandedly won the 1948 Grey Cup for the team. His wrestling career? A footnote in the life of a great man. 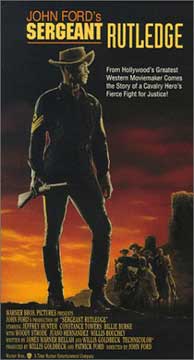 Born in Los Angeles on July 28, 1914, with his mother a full-blooded Blackfoot, Woodrow Wilson Woolwine Strode grew into a solid 6-foot-4-1/2, 220-pound stud. He competed in track and field and played football as a tight-end at UCLA. Two teammates at UCLA were Jackie Robinson and Kenny Washington. Of course, Robinson would go on to break major league baseball’s colour barrier in 1947. Washington and Strode? They broke the NFL’s modern colour barrier the year before, suiting up for the Los Angeles Rams. Unlike Robinson, however, neither played much. Of course, their football rhythm had been broken up by World War II. Strode served in the Air Force from 1942 to 1946, including time in Guam and the Marianas where he unloaded bombs.

While at UCLA, he met his future wife when the football team was playing the University of Hawaii in Honolulu — Hawaiian princess Luukialunan Kalaeloa. They were married in 1940 in Las Vegas. The couple would have a son and a daughter to compliment Kalaeloa’s two sons from a previous marriage. (After she died in 1980, Strode would marry Tina in 1982, and they were together until his death.)

After being cut by the Rams after just a season, Strode headed north to Canada, where he suited up for the Calgary Stampeders. Under coach Les Lear, the young team made it to the Grey Cup, November 27, 1948, set to face the Ottawa Roughriders. Working with quarterback Keith Spaith, he excelled as a receiver, and did double duty on the defensive side as an end as the Stamps compiled an unbeaten record. 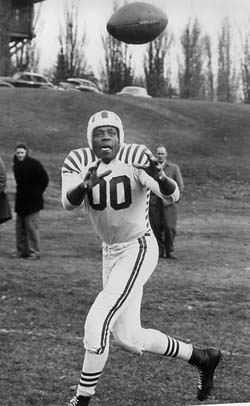 Strode as a member of the Calgary Stampeders.

In the Grey Cup game, Strode grabbed a misplayed lateral pass by Ottawa quarterback Peter Karpuk off the ground, and lumbered almost to the end zone. Pete Thodos would score shortly thereafter to seal a 12-7 Calgary win.

“That was one of the great days in my life and I can remember it very clearly,” Strode told the Toronto Star‘s George Gamester in 1977. “Never had so much fun as I did in Canada. When we won, we all got drunk. And when we lost, we cried like babies.”

Besides marking Calgary’s first Grey Cup championship, the 1948 game proved to be a turning point in Grey Cup lore as well. The Stampeder supporters invaded Toronto and a national party was created. Strode, doing his part, is reported to have ridden a horse in the famed Royal York hotel.

Strode would play two more seasons in Calgary before an injury ended his football life. (He never forgot Calgary, however, and returned to the city in 1986 to aid fundraising for the financially-ailing team.)

Wrestling was next on his resume. “Actually, I had been rassling in the off-season anyhow,” Strode told the late, great Canadian newspaper columnist Jim Proudfoot. “I just started to do it full-time in 1951.”

His wrestling career lasted until 1960, but by 1952, Strode had started getting movie parts. (A small role in 1941’s Sundown marked his actual debut.) The fame he had built through football and movies helped open up wrestling as well, and Strode wrestled white grapplers in Texas in the early ’50s.

As an actor, Strode is forever tied to John Ford (see our Pepper Martin biography for some stories that involve both Strode and Ford). It was Ford who cast Strode in the lead role in Sergeant Rutledge. Strode was a black cavalry officer on trial for rape and murder, and during the court-martial his story is recounted in flashback.

Strode praised Ford in a 1960 interview. “I was lucky enough this time to have John Ford as my director. That means everything, working with a man like that.” Ford and Strode would also work together on Two Rode Together, and The Man Who Shot Liberty Valance.

Besides Ford, Strode also worked with storied directors Cecil B. De Mille (The Ten Commandments as the King of Ethiopia); Stanley Kubrick (Spartacus); and Sergio Leone (Once Upon a Time in the West).

Spartacus is probably Strode’s most famous role as the warrior Kirk Douglas refuses to kill. “I would have lost that role if I hadn’t been in shape, and if I hadn’t had a lot of experience as a wrestler,” Strode told the Pittsburgh Courier in 1961. “It took skill to do that fight scene without actually hurting myself or hurting Douglas.” 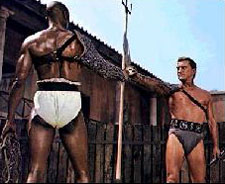 Kirk Douglas faces off with Woody Strode in Spartacus

He left for Italy in 1969, frustrated with the lack of meaty roles as an African-American. Strode lived in Italy for five years and made 12 films there. “Race is not a factor in the world market,” he said in a 1982 interview with the Globe and Mail. “I once played a part written for an Irish prize fighter. I’ve done everything but play an Anglo-Saxon. I’d do that if I could. I’d play a Viking with blue contact lenses and a blond wig if I could.” (Proving the point: In Androcles and the Lion, Strode actually dressed as the lion.)

In 1990, Strode’s autobiography, Goal Dust, was published. In 1992, he was honored by the Cauliflower Alley Club with wrestling’s top award, the Iron Mike Mazurki Award. Strode died in his sleep at his home in Glendora, California of lung cancer on December 31, 1994. His last film was The Quick and the Dead, which starred Sharon Stone.