If you pick up Goal Dust for Woody Strode’s wrestling career, you will be let down. However, you will learn so much more about a fascinating man, and a trailblazing athlete and actor. 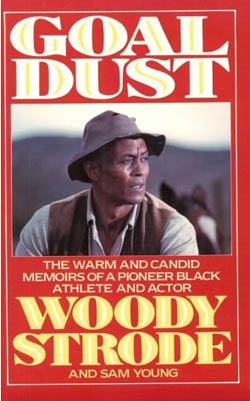 Strode, for those who are unfamiliar, wrestled for nine years or so, with his in-ring action often fitted around acting commitments. But before that, he was a star football player at UCLA, one of the first African-Americans on the team. He would later break the modern colour barrier in the NFL as a member of the Los Angeles Rams.

His autobiography, Goal Dust: The Warm and Candid Memoirs of a Pioneer Black Athlete and Actor, came out in 1990 from Madison Books, written with author Sam Young. He would die just four years later, in 1994, of lung cancer. So it really is a sum of his life.

Wrestling-wise, there is one chapter on his grappling career, with some good road tales. But there isn’t a lot of insight into the business itself, or the people therein, and Strode certainly doesn’t adhere to kayfabe. He admits openly that professional wrestling is a show, and a show that he enjoyed doing. “It’s a think line between the showmanship and the straight wrestling,” he philosophizes. “Straight wrestling is too dull. If I’ve got a headlock on you and stop your circulation, you’ll faint. They fans won’t pay to see that. The real artists can hit you without doing any damage. They can throw a punch and land it right on your skin. That’s how good you have to be. The guys who miss are not good.”

There were some great little tidbits, however.

Did you know that he bought Gorgeous George’s California turkey farm, and that’s where he and his wife, Luukialunan Kalaeloa, raised their two children?

He talked about being introduced around the Olympic Auditorium by promoter Cal Eaton, meeting legends like Sandor Szabo, Strangler Lewis and Jim Londos. Strode was floored by the veterans’ physiques. “I had never seen athletes that looked so good at that age, They were the most glamorous wrestlers in the prime of their careers.”

His football training was a detriment at times as well. “I couldn’t become a headliner until I learned to let them throw me out of the ring,” Strode writes. “When they got me near that top rope, I used to hold on for dear life. Finally, I overcame the fear. All you have to do when they toss you out is grab the top rope; that slows you down. When you hit the seat, flop like a sack of potatoes. The first time I made it, it registered: I’m not going to get hurt.”As scarce as the wrestling details may be, Goal Dust is still a great read. It offers a thoughtful take on race in America during Strode’s youth in Los Angeles in the 1920s and 1930s (he was born in 1914), as well as how the times changed during his life. It’s also a glimpse into the old Los Angeles, before the city grew into the monster that it is now.

The work he put into getting into UCLA — which was only then being established as a sporting power — was remarkable and showed a real faith and patience. His stories about his best friend, football legend Kenny Washington, are awesome. It was a different era, for sure, where a player like Washington could be a national superstar in college football, but never pan out into much in the pros because of racism and other factors, like his injuries.

Also at UCLA for a year was the incomparable Jackie Robinson, who was a track and football star, and not yet the baseball legend. Strode offers his take on Robinson and his legacy.

In the professional football ranks, Strode admits to essentially riding the bench as a Ram, riding the coattails of Washington and never given much of a chance to prove himself. When he is cut from Los Angeles, Strode makes his way to Calgary for two seasons to play for the Stampeders in the CFL. His stories of the Grey Cup, where he was one of the game’s heroes in 1948, are terrific and revealing — Strode admits he rode a horse into the posh Royal York Hotel.The last half of the autobiography deals with Strode’s adventures in the movies, growing from a bit part to a leading actor. His friendship with director John Ford is explored in depth, with no holds barred; Strode calls a spade a spade throughout the book. Other drinking tales with Lee Marvin or Kirk Douglas keep the story bouncing along.

Goal Dust has been out of print for many years, but should be relatively easy to find through used book stores.