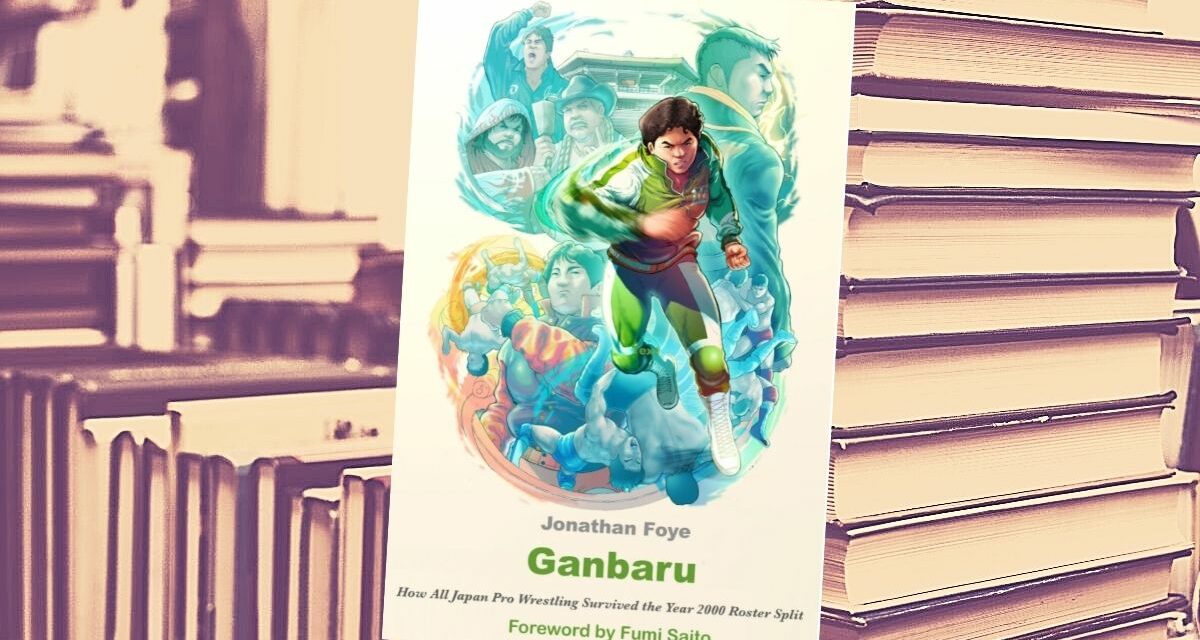 Fans of Japanese puroresu, pro-wrestling in general, and non-wrestling fans interested in complex ‘human’ stories are all in for a treat. All three of those different groups can enjoy the fascinating and complex tale told in Jonathan Foye’s debut book Ganbaru: How All Japan Pro Wrestling Survived the Year 2000 Roster Split.

Ganbaru is an apt title and introduction to the story since the word translates into English as “[to] stand firm.” That term describes the key players in this story, Mitsuharu Misawa and Motoko Baba, perfectly.

But the book isn’t written for puro or wrestling fans exclusively; instead, Foye, with the help of Japanese wrestling historian Fumi Saito and NOAH blog owner and translator Hisame, paint the picture both in broad strokes and in great detail in such a way that a reader with no knowledge of wrestling would understand the story as much as the most ardent of wrestling enthusiasts.

Like many wrestling authors, Foye grew up as a fan of WWE during the Attitude Era and became hooked on it following the critically-acclaimed match between Bret Hart and ‘Stone Cold’ Steve Austin at Survivor Series 1996. But not long after that, Foye’s interest shifted closer to home across the Pacific. He was interested in Japanese wrestlers like Tajiri and soon found himself reading about and immersing himself in the more sport-like product in Japan. From there, he found a topic that served as the focal point of this book: the All Japan/NOAH split in 2000.

This isn’t a re-tread of the same story (the creation of NOAH and what happened to its wrestlers) that has been told before in earlier works. Instead, Foye focuses on the events and circumstances around that split itself in a way that hasn’t been done before. Whereas other journalists and authors have mentioned the split either in passing or in relation to other events (Chris Charlton’s book Eggshells, which explores the history of puroresu in the Tokyo Dome and is frequently cited here), Foye makes that event this book’s central point.

The first two chapters provide rich and detailed background and context needed to understand why the split took place. It summarizes the history of puro going as far back as its founding with Rikidozan and then introduces the key players involved. There’s Giant Baba (‘Baba’ hereafter), the beloved and respected owner of All Japan Pro-Wrestling. There’s Mitsuharu Misawa, his star wrestler and the man he later chooses as his successor. Other wrestlers are introduced who play roles great and small in this story: Jumbo Tsuruta is Misawa’s first rival. Genichiro Tenryu is a big star of the 1980s who leaves All Japan in 1990 but (spoiler alert) comes back in 2000 for unexpected reasons. Misawa’s other big rival Toshiaki Kawada and other regular wrestlers are introduced, along with other wrestlers that helped Misawa make All Japan’s Oudou (King’s Road) style and booking philosophy so critically and commercially successful.

Motoko Baba (‘Motoko’ hereafter), Giant Baba’s wife is introduced briefly in the first chapter, but her significance isn’t expanded upon until Chapter Three. It is here that the meat of the story is presented. The conflict between Mokoto and Mitsuharu Misawa is introduced formally. A sudden dramatic development occurs when Baba himself dies. From there the complexity of the conflict is expanded upon and battle lines are drawn. The widow Motoko and Misawa both share the same goal: to preserve Baba’s legacy. But the methods by which they seek to achieve that goal differ so much that resolution becomes impossible.

Both of them have their reasons for digging their heels and, indeed, living up to the book’s title and “standing firm.” Misawa took issue with some of the company’s organizational and pay structure and wanted to modernize both the wrestlers’ contract and the product’s presentation, all while maintaining the wrestling style and booking Baba promoted. Motoko, meanwhile, took the concept of ‘preservation’ further to heart and wanted to change nothing, arguing (correctly) that both All Japan and pro-wrestling in general had already peaked.

From here, the Foye tells a story about pro-wrestling that is decidedly not a pro-wrestling story. The events that unfold next aren’t told through the classic pro-wrestling style narrative; there are no babyfaces or heels here. Instead, all the critical players in the story are presented as merely human. Human beings with human flaws and human motivations. The decisions made by everyone involved are laid bare for all to see, which allows the reader to see all the facts for themselves and draw their own conclusions. No one is inherently right or wrong and both of them make mistakes in how they go about achieving their goals. And yet, both of them see each other as the enemy, but that comes not necessarily from fact but from the lens through which they see the world around them.

After discussing the split itself and providing some direct quotes and details, Ganbaru then presents two sides of the same coin. One chapter explores Motoko’s struggle and decisions to keep All Japan alive, while the next one highlights the fruits of Misawa’s labor and the success of his new company, Pro-Wrestling NOAH. And while much has already been written on the latter, Foye’s decision to focus on Motoko and the former is what makes this book such an interesting read.

Never before has a written piece provided such extensive detail on the All Japan side of the split. This seems to stem from a popularity issue; most fans were bigger supporters of Misawa and NOAH than they were of All Japan and the skeleton crew that remained behind. But to cast the All Japan crew in such a light would be both a disservice and factually incorrect. The All Japan/NOAH split, in effect, mirrored the end of the Monday Night Wars. Whereas WWF/E absorbed two smaller companies to monopolize wrestling in the United States, this split took a mostly two-horse race and added a new player. Foye’s decision to focus on this topic not only expands on the already-rich history of pro-wrestling, but his choice of topic also helps emphasize the important actions and choices of people that would’ve otherwise been ignored as ‘lesser figures’ in that same history as well as the very grounded and human motivations that guided them.

Chapter Five in particular highlights the decisions that proved that Motoko’s caricature as a ‘stern mother’ or ‘The Dragon Lady of All Japan’ was an oversimplification, at best. Part of it was by design; Motoko took bullets for her husband and acted as his firewall in order to preserve his positive reputation. And yet, she herself was a shrewd businesswoman and was able to improve on many aspects of the organization following her husband’s death. Stan Hansen, who is quoted many times throughout the book due to both his closeness to the Baba family and his firsthand experience in All Japan during the split, noted how, under Motoko, All Japan shifted from being run as a family business to more of a formal corporate organization. This had its benefits, which were attributed to Motoko’s direction. Through all of these trials and tribulations, Motoko was able to make some critical business decisions that saved all Japan from closing its doors forever. This caricature also ignores how Motoko treated the gaijin/foreign talent, which was much more positive. After all, would a ‘Dragon Lady’ go out of her way to ship turkey to the gaijin talent so that they can celebrate Thanksgiving while on tour in a foreign country away from their homes and families?

But Motoko isn’t the only important person in All Japan’s story of survival and revitalization. There are others as well, and although they are wrestlers, their motivations here aren’t necessarily those of wrestling superstars. Toshiaki Kawada stays with All Japan to both become a big draw in crosspromotional matches with New Japan (which throws All Japan a much-needed lifeline) and to escape his ‘brother’ Misawa’s shadow (Fumi Saito here quashes longstanding rumors that Misawa and Kawada had a falling out at the time of the split). Genichiro Tenryu is brought back and promises to help Motoko keep Baba’s legacy alive. Lastly, New Japan wrestler Keiji Mutoh is the biggest star to ‘come over’ as part of the New Japan deal, but it soon becomes apparent that his motivation for coming (and later staying) is about freedom as much as it is about fame and fortune.

Together, these four key figures – Motoko, Kawada, Tenryu, and Mutoh – took a company that lost 90% of its native roster, its TV deal, most of its office staff, and a significant chunk of its fanbase, and manage to not only survive impending doom but bounce back in a big way.

The next chapter covers the NOAH side of the split, focusing on the company’s early success while leaving on a bit of a cliffhanger as NOAH’s success begins to slow down. And yet, it does provide some interesting tidbits, thanks to the hard work of Hisame, who runs an unofficial English NOAH blog called Puro Translations/NOAH ARKIVE. The most notable of these tidbits being that while Misawa did end up making some changes to the business side of things, his in-ring product remained largely unchanged from Baba’s. In that sense, there is plenty of evidence presented that suggests that Misawa did as good a job as Motoko of preserving Baba’s legacy, if not a better one.

The book ends on a somewhat saddening note as it highlights the continued bitterness between Misawa and Motoko. Despite both achieving their goals in their own minds, the two of them couldn’t make amends. Just as this book’s title suggests, both Misawa and Motoko demonstrated Ganbaru: both stood firm in their positions and refused to bend in any way. And while Misawa was able to forge a working relationship with All Japan a few years later, this was after Mutoh bought Motoko out and became the company’s new president. Misawa and Motoko never reconciled formally; the closest they came to any sort of resolution was when Motoko attended Misawa’s private funeral in 2009.

Ganbaru makes for an easy yet engaging read. Foye delves deep into the complexity of the situation surrounding the split and explains everything carefully and methodically. These explanations (and indeed, the entire book for that matter) are supported by firsthand accounts from Fumi Saito and extensive further research. Foye’s presentation of events and facts are well-supported by excerpts from the autobiographies of Stan Hansen, Mick Foley, Freddie Blassie, and others; numerous editions of the Wrestling Observer Newsletter, direct translations by Hisame and Chris Charlton; and even archival content by SlamWrestling.net authors John Molinaro and yours truly.

With all of this research and an illustrative style, Ganbaru provides different readers with different things. Puro enthusiasts will appreciate Foye’s dedication to providing background to these events and how he addresses a complicated issue in a neutral way (along with a list of hidden classics found in the addendum). Wrestling fans more broadly can read this book and not only understand the entire context behind it but also be entertained in the almost soap-opera-like drama unfold. Lastly, non-wrestling fans can read this book and nothing will come across as alien. Even with professional wrestling being so cloistered and esoteric, Ganbaru does a phenomenal job in presenting everyone as human with relatable and understandable motivations.

So while Ganbaru might market itself as wrestling book, the stories and characters involved make it much more than that.