All Japan’s Four Pillars of Heaven set the standard

When The Wrestling Observer‘s Dave Meltzer gave the Wrestle Kingdom 11 match between Kenny Omega and Kazuchika Okada a six-star rating, it sent the Internet wrestling community into a frenzy. They wondered how it was possible for any match to ever be rated so highly by wrestling’s best-known journalist? 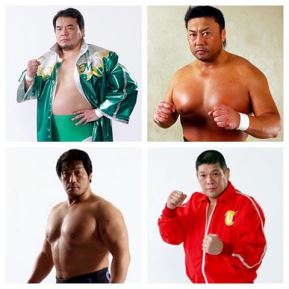 A few days later, Meltzer reminded everyone that it was not the first match to ever get a six-star rating from him. There was one match from 1994 that got the same rating — a match between Mitsuharu Misawa and Toshiaki Kawada, two of the Four Pillars of Heaven of All Japan Pro Wrestling.

That match is an excellent reminder that All Japan Pro Wrestling (AJPW) was once the best promotion on the planet. Between 1990 and 2000, AJPW was the home to more five-star matches than any other wrestling company anywhere. And at the centre of this streak of critically-acclaimed matches were four wrestlers that became known as “The Four Pillars of Heaven.”

These four men, Akira Taue, Toshiaki Kawada, Kenta Kobashi, and Mitsuharu Misawa, have more five-star-rated matches among them than any other group of wrestlers in history. Meltzer has sung these men’s praises for years, and their fame has spread far and wide, in part because of his writings in The Wrestling Observer Newsletter.

The Four Pillars of Heaven were the students of a wrestling style called “King’s Road,” which stems from the original NWA wrestling style that created legendary wrestling personalities like Ric Flair and the Four Horsemen, Sting, Harley Race, Stan Hansen, just to name a few.

King’s Road-style matches were heavy on multi-layered storytelling and ring psychology and, coupled with the Japanese presentation of wrestling as a genuine athletic contest, led to what could very well be the closest thing to pure wrestling as it’s meant to be.

While some of the greatest wrestling matches of all time involved the Four Pillars of Heaven in some way, they weren’t always alone. Over the years they were joined by a cavalcade of likewise-impressive wrestlers that joined them in the great match department: Stan Hansen, Steve “Dr. Death” Williams, Vader, Jun Akiyama, Terry Gordy, Johnny Ace, just to name a few. 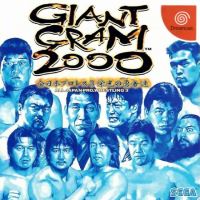 While these matches weren’t as widespread as their WWE and WCW counterparts, they still found considerable popularity among fans in the United States. Most of these matches were recorded on video tape and were then traded and sold illegally in the U.S. for years. They became hot commodities among wrestling fans due to their incredible in-ring quality and unbelievable storytelling and ring psychology.

But The Wrestling Observer and its readers weren’t the only ones to praise AJPW and its Four Pillars.

Kenny Omega is no stranger to critically-acclaimed matches, either. His bouts with both Tetsuya Naito and Kazuchika Okada were among the greatest matches of the last decade. He, too, praised All Japan’s Four Pillars for their style:

“Kawada, Kobashi, Misawa, Akiyama, Stan Hansen, those dudes were bringing forward a style that really couldn’t be reproduced anywhere, and you really had to watch it in All Japan or you wouldn’t see it anywhere else,” said Omega, a top star in New Japan Pro Wrestling. “You really knew you‘ve made an impact on wrestling history when people from across the globe, from that point on and for years to come, are trying to copy that style, are trying to take that style and make it their own — or just shamelessly rip it off. ”

Rocky Romero, currently one of the stars of New Japan’s junior heavyweight division, learned about the Four Pillars through his trainer and from some wrestling video games that were circulating during his formative years, particularly Giant Gram 2000. When his trainer showed him a match between Misawa and Kawada, Romero found immediate respect for those wrestlers.Steve Williams considered the best match of his career to have been one he had against Kenta Kobashi. It is remembered by die-hard wrestling fans for the ending, where “Dr. Death” nailed Kobashi with three of the most vicious Dangerous Backdrops ever seen, in a match from August 31, 1993.

“My trainer, Kevin Quinn, introduced me to Misawa and Kawada. They were the first ones that I saw,” said Romero, who competes for Ring of Honor in North America. “He [Quinn] was like, ‘This is the best wrestling match you’ll ever see because it’s just basic wrestling and people are going nuts.’ I respect that and the simplicity of it, and I think it’s cool.”

Del “The Patriot” Wilkes, who wrestled briefly under that gimmick in WWE, considered wrestling with the AJPW wrestlers to be the crowning achievement of his career. He also called Kenta Kobashi (who, incidentally, won The Wrestling Observer Newsletter’s Match of the Year a record six times) the greatest wrestler of all.. “To be part of that line-up … it was a feather in your hat to work for [Giant] Baba full time,” said Wilkes.

Even those that had nothing to do with AJPW still have reasons to praise the Four Pillars and the work they did in the ring. Here’s what Jim Ross had to say about Misawa shortly after the latter’s death in June 2009:

“Misawa was arguably the best in-ring performer in the world in his prime. In addition to being a physical, fundamentally-sound athlete, timing and toughness were two of his greatest attributes. Great timing is a gift that largely can’t be taught, much like ring psychology. Toughness is another trait that can be nurtured but generally can’t be taught. Misawa was naturally tough and it showed. And his fans loved him for it. They also loved his passion and the emotional ride on which he would take them. That’s what pro wrestling is, selling emotion.

“I encourage all fans to find DVDs of Misawa and watch him in his prime, in the 90’s especially. If one is really serious about being a highly skilled pro wrestler, then study the late Mitsuharu Misawa. “

Ross never met Misawa, nor did he ever call any of Misawa’s matches, but J.R. still praised Misawa’s work in the ring. It is easy for someone who has been around the business, like Ross, to gain an eye for talent and skill, both of which Misawa had in huge supply. It shouldn’t surprise anyone that Misawa holds the record for most five-star matches awarded by The Wrestling Observer at 25 (plus one six-star match).

Naturally, these legendary and critically-acclaimed matches have impacted today’s wrestling in a major way. Daniel Bryan, who rose to prominence in WWE between 2013 and 2016, was influenced heavily by these Japanese legends.

“My biggest influences are the guys from All Japan,” said Bryan in June 2009. “I love Misawa, Kawada, and especially those tag matches in the late eighties-early nineties that had Joe Malenko, Dan Kroffat [Phil Lafon] and a lot of the good technical wrestlers in them.”

Bryan, as you may recall, specialized in hitting stiff kicks, which was also Kawada’s go-to offensive attack in his matches.

The days of the Four Pillars of Heaven are long gone, their bodies worn down by decades of wrestling at an unmatchable level. Kobashi and Taue both retired in 2013, Kawada hasn’t wrestled a match since August 2010, and Misawa, tragically, passed away in the ring in August 2009.

Chris Hero, known to WWE fans as Kassius Ohno, was also influenced heavily by the Four Pillars, especially by Misawa. His signature discus elbow smash is a tribute to Misawa, who used the move for well over a decade. Hero, who considered Misawa one of his idols, was filled with dread when Misawa collapsed, never to wake up again:

“The moment at ringside felt like an eternity. Never, in my life, have I wanted the fighting spirit to jump into someone’s being more than I wanted tonight. The fans chanted Misawa, Misawa, Misawa. They wanted their Hero to get up so f***ing bad. Just get up. Come on! You’re too tough for this. Too strong. I grabbed his boots and held onto them til they took him away.”

Hero has since continued to use the discus elbow in tribute to Misawa wherever he has wrestled, including in WWE. Few people have recognized the connection at first, but it’s only when you look at Hero’s own influences would you realize that he’s paying homage to one of arguably the four greatest wrestlers of all time.

Nowadays, most of these legendary matches can be found on YouTube and DailyMotion. Oddly enough, AJPW isn’t as strict when it comes to copyright infringement and re-uploads of its matches, so many YouTubers have started uploading tapes of these classic wrestling contests. For those looking for more details on the wrestlers themselves, puroresucentral.com is a great starting point to learn about the Four Pillars and their allies and rivals.

Since All Japan Pro Wrestling doesn’t have a streaming service with archives the way WWE or New Japan Pro Wrestling do, it can be a challenge to find videos of the Four Pillars of Heaven in action. We can’t promise that all the links you follow will work, but many will. Here’s a list of the best Puroresu matches of all time and another person has compiled a list of the best matches specifically by the Four Pillars of Heaven. The YouTube channel ClassisPuro83 has some goodies too. Or you can find someone with VHS copies of these classics from the days of tape trading — they are out there somewhere. Happy hunting! 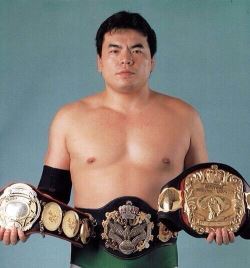 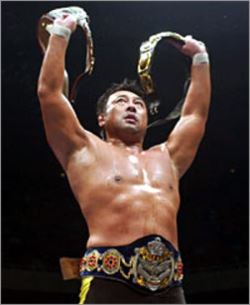 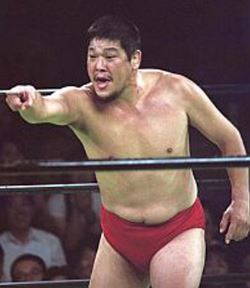 For Richard Slinger, wrestling in Japan was as real as it gets