In a Tweet yesterday, Reby Hardy (the wife of WWE superstar Matt Hardy) took a swing not only at Ed Nordholm, the Executive Vice President of Anthem Sports & Entertainment and president of Global Force Impact Wrestling but seemingly his home country of Canada as well.

@JoshuaM87980356 Tweeted: “Poor Canada. Is it because of Trish Stratus being best friends with Amy Doo-mah?” referring to Hardy’s feud with Lita, Matt Hardy’s former girlfriend and WWE superstar.

“What do you have against Canadians eh? We also love Broken Matt,” Tweeted @swatryan2000.

@BNBroadcast based out of Toronto wrote: “What does Canadian have to do with this ugly situation?! Don’t be getting ignorant.”

The Tweet was in response to an interview Nordholm did with Sports Illustrated in which he commented on the legal battle between the Hardys and Global Force Impact Wrestling over the ownership of the “Broken” gimmick.

Brothers Jeff and Matt Hardy now work for the WWE, making a surprise return at WrestleMania back in April. 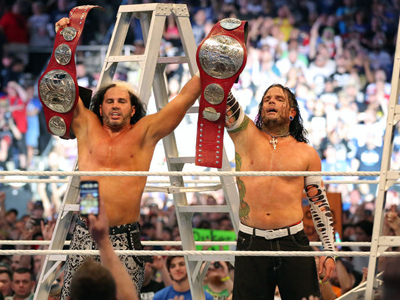