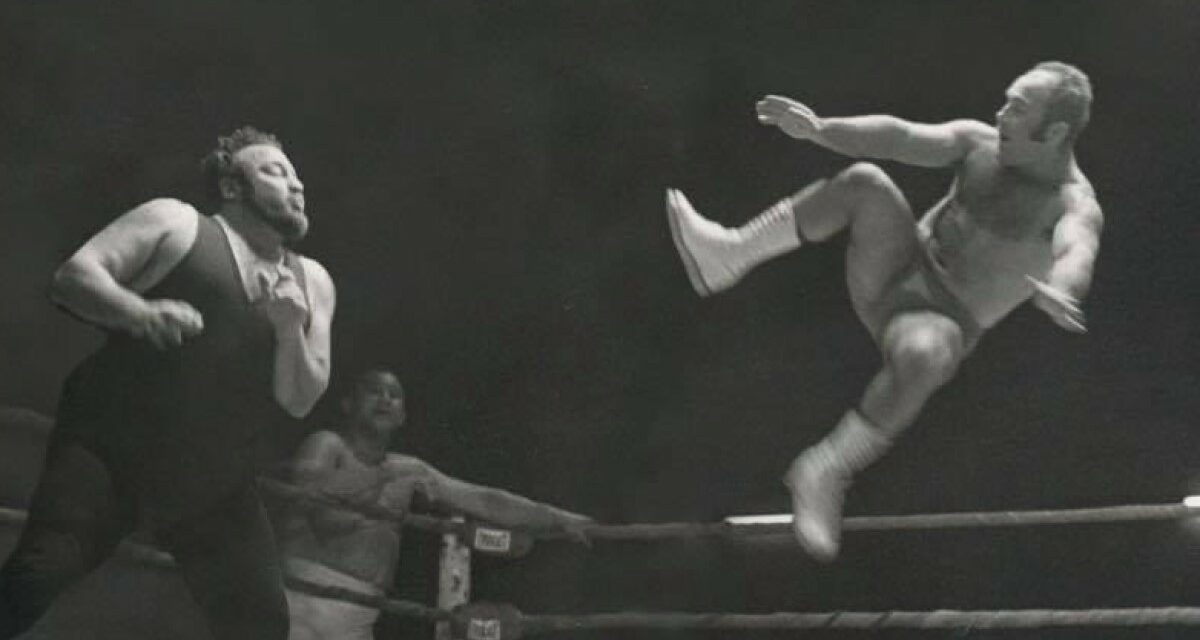 Going into the recently released documentary called The Flying Greek about wrestler Mike Pappas (Manoli Savvenas), I found myself sharing a perspective with the director Jason Brasier in that I didn’t know anything about Pappas’ career. Here was a man who had worked alongside the likes of André the Giant, The Blue Demon, and Pedro Morales in the 1960s and ’70s, but had contentedly retired to open a jewellery store in Springfield, Missouri, and raise a family and leave his wrestling life behind him.

Brasier, in an interview with Slam Wrestling conducted ahead of the film’s premiere, recalled meeting Savvenas by chance as Brasier was working as a camera operator on a local talk show. Taken with Savvenas’ still-going-strong showmanship, Brasier began compiling footage and interviews, leading to The Flying Greek. 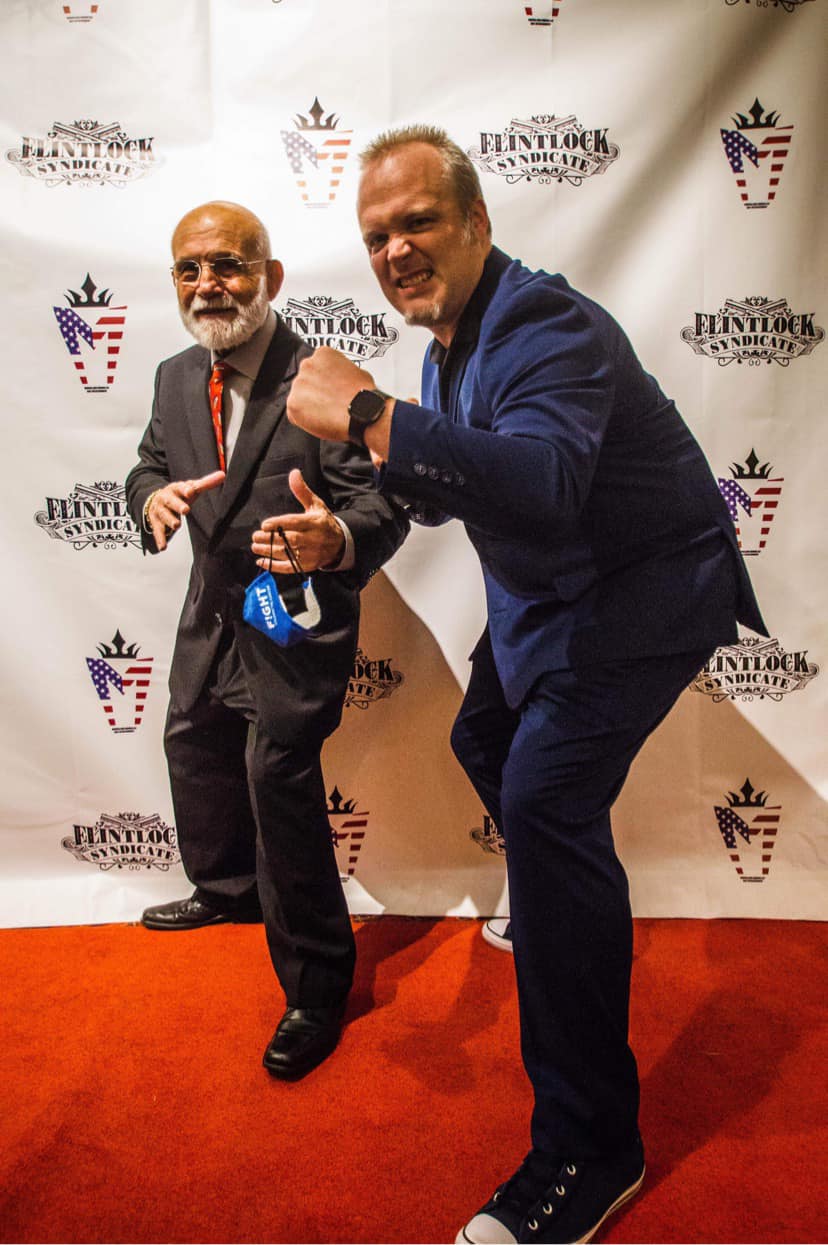 Manoli Savvenas and director Jason Brasier hit the red carpet the the premiere of The Flying Greek on Dec. 10, 2021, in Springfield Missouri.

At 40-minutes in length, the short-form documentary has little time to waste, condensing Savvenas’ youth and his time in the ring as Pappas into tightly-packed segments. There’s no sense of the story being rushed, however, and Brasier effectively edits the flow to go forwards or backwards in time as it suits the narrative, which works better in this case than a purely chronological re-telling of Savvenas’ life story.

There is an unfortunate hole in the film of in-ring action from Savvenas’ prime (which, as Brasier explained, was not through lack of research or efforts), but the saving grace is that Savvenas’ tellings of his time as an in-ring worker are entertaining and evocative on their own. He is, as Brasier noticed the first time he met him, an entertaining storyteller, and short of seeing him compete his memories are the next best thing.

Besides, part of the point of the film is that while fans and wrestling historians have stories to tell about Mike Pappas and his high-flying style, it only represented about a 10-year span of Savvenas’ life. The rest of the film presents the opportunity to explore everything else that makes a lifetime: growing up in Greece, travelling the world as he sought a way to make a living and pursue his dreams, and finally settling down and becoming a patriarch of his own family.

For those segments, the film makes use of a wealth of photographs of a young Savvenas coupled nicely with his recollections. His wife, Valerie, and their children, Maria, Dino, and Packy, appear on screen as adults, with all speaking about his constant desire to entertain. Their own youth is captured in photos as well, including one of them sitting on a couch as kids with The Junkyard Dog.

Family also provided a surprising opportunity to include an unfolding story within the film, as Savvenas has a daughter from a previous relationship named Constandina. She was in the midst of trying to find and connect with her father, and her search is presented in the film with its happy and emotional conclusion. It’s here that the documentary is elevated beyond a professional sports biography and becomes more about life’s inevitable twists and turns, whether you were a famous wrestler or not. 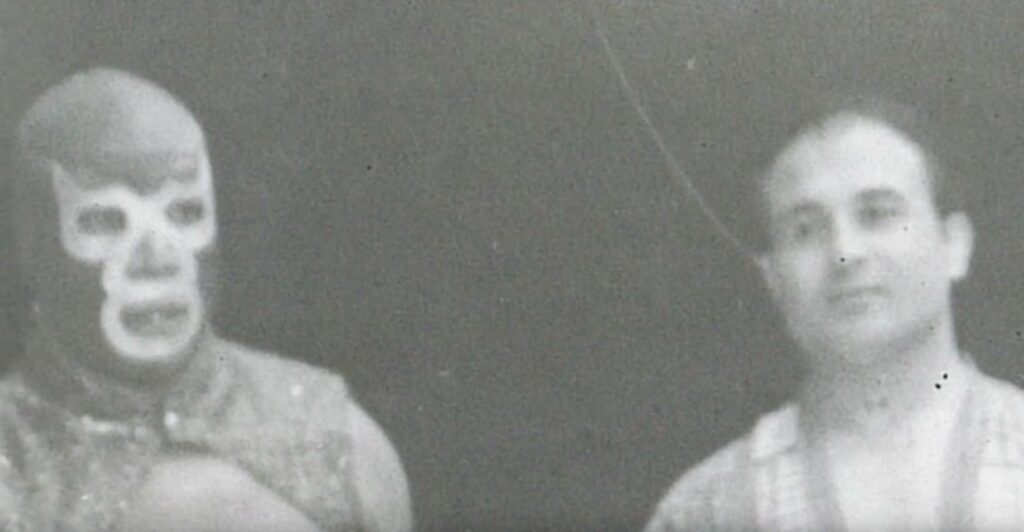 The Blue Demon and Mike Pappas in the ring together, from a still shot in the documentary.

The film is narrated by Madusa (Debrah Miceli), whose name on the card is sure to help bring in some awareness and viewers. Adding veteran wrestling journalist Bill Apter’s voice to those looking back on the career of Mike Pappas also helps to place him in history, as Apter acknowledges Savvenas an unsung hero of his era for the steady work he did to win over fans and support the big names he worked with.

In the film, Brasier says that, “Sometimes if you do your job right, people don’t hear about you,” which is true for so many in so many professions. People like that still have full lives, though, with the same ups and downs as everyone else. Having a chance to sit and listen to Savvenas spin his tales of how he sought his fortune and found it twice over, in the ring and with his family, is a simple but very pleasing time.

As of this article’s publication, the film is awaiting its release on streaming and digital hard copies. There will be an online screening in the new year, and Brasier will announce the date for that when it is finalized. Slam Wrestling will post updates on how to watch the film when the information is available.