Pappas, whose real name is Manoli Savvenas, was born in Rhodes, Greece. Quite the athlete in his youth, his main interest was amateur boxing, a sport that took him to Australia. While there, he met a Greek police captain who was impressed by his physique and athleticism, who asked Pappas, “How would you like to wrestle?”

“I said, ‘No, I don’t like wrestling very much. I like boxing better.’ Little did I know, wrestling would become both my passion and my livelihood in the years ahead,” Pappas recalled.

Mike Pappas in his heyday. Photo by Scott Teal

The policeman convinced Pappas to train in amateur wrestling, and after a time, introduced him to a local professional wrestling promoter. “I wrestled for him in Australia for awhile and then Jimmy Barnett came in and I wrestled for him just a couple times. While I was there, though, I met some wrestlers from America.”

Pappas eventually left Australia and went back to Greece, where he opened a business. “The business didn’t do well because of the military government, so I went to the consulate and asked for a visa to go to America. They turned me down several times. Then my sister found a boyfriend and was going to get married in the U.S. I went back to the consulate and asked them to give me a visa so I could go to the wedding. The man in charge made me swear I’d come back. He said people go as tourists, but never come back. I promised and he gave me the visa.”

The first thing Pappas did in the U.S. was go to the matches at Madison Square Garden. “When I told Arnold Skaaland I had wrestled in Australia, he gave me a couple of tickets and told me to stop by the office on Holland Street. I wanted to see Angelo Savoldi because I met him in Australia. When Angelo came out, though, it wasn’t the guy I knew. Somebody else had been using his name.”

Considered to be too small for the New York territory, they helped Pappas get booked in Mexico where he stayed for six months. After returning to Greece, as promised, he got in contact with Nick Gulas, who primarily used lightweights and middleweights. “It was Nick who gave me a working visa and brought me to Nashville.” 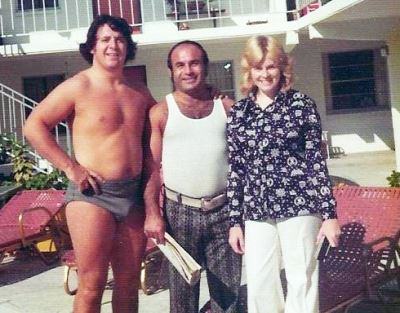 Pappas came back to the States and worked in Oklahoma, Knoxville, and then met Buck Robley, who brought him into Kansas City. “He used me good, but the territory was really down. When things picked up, they brought in the big stars from other territories and quit using me. That’s when I quit … 1978.”

He left wrestling and never looked back. Having been in the jewelry business since he was 11 years old, Pappas worked in a Springfield, Missouri, jewelry shop making and repairing jewelry, and six months later, bought the company he worked for. “I went there with only $200 in my pocket. The shop wasn’t doing well and was ready to close. I eventually closed the shop and converted it to a retail jewelry store.” 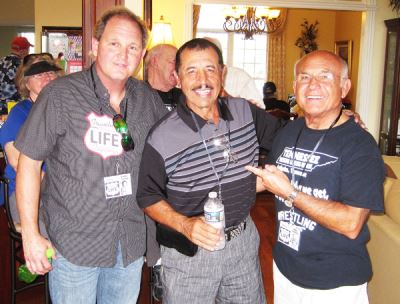 Today, Manoli’s Jewelers is a thriving business in Springfield, and has been in business for 38 years. Mike and his wife, Valerie, run the store and have made and serviced jewelry for more than 50 stores, including many of the big retail chains like Zales and Gordons. They make a great team. Mike is a master goldsmith, while Valerie is a graduate gemologist certified by the GIA and an authority on gemstones.

“I had a great time in the wrestling business. It helped me in life because I met a lot of people and learned how to sell myself, which was a big help in my business.”

Pappas is one of the true success stories both in and out of professional wrestling.

Scott Teal has a long and varied association with pro wrestling. Today, he’s the man behind Crowbar Press, which has published autobiographies by the likes of J.J. Dillon, Ivan Koloff, Stan Hansen, Ole Anderson and many more, as well as the great Whatever Happened To … newsletters. Visit the Crowbar Press website for all the details.