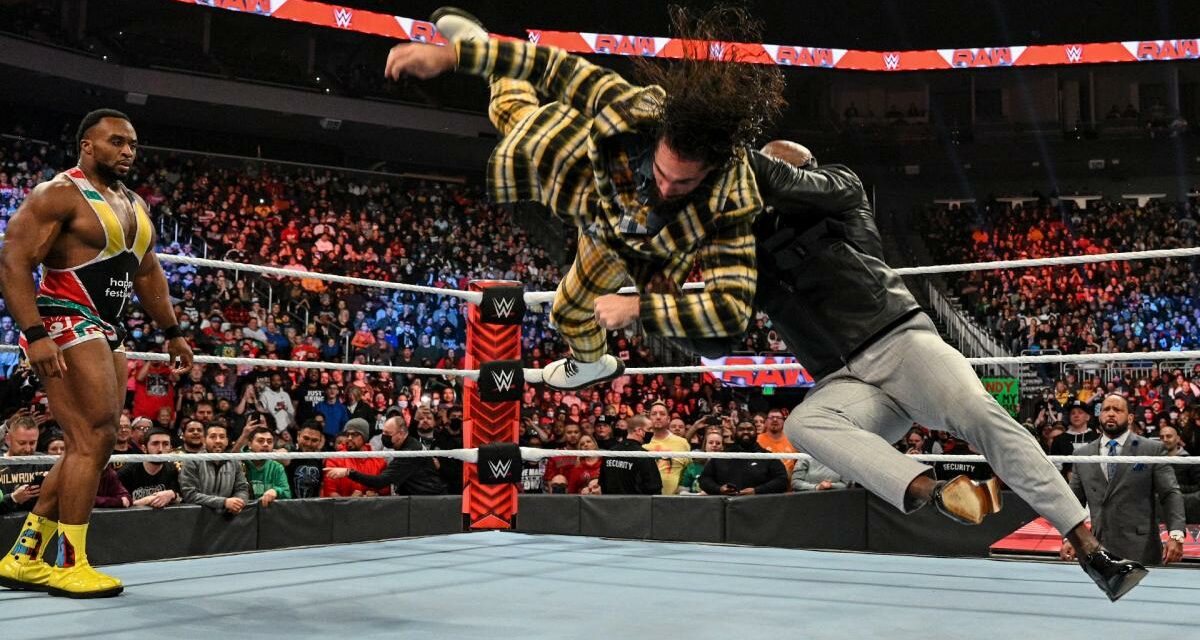 The ratings for Monday Night RAW are, well, not good. Maybe announcing what matches and segments will be on the show will change that. Also, maybe putting a little hat on a snowball will make it last longer in the desert. Will anyone tune in to see Bobby Lashley talk about Day 1, or to see Maryse on “The Cutting Edge”? Maybe Dolph Ziggler taking on Damien Priest in a “Contender Match” will draw eyeballs? Onto the show.

Once again, our “wrestling” show starts off with people standing around in the ring talking. MVP and Bobby Lashley celebrate Lashley winning the gauntlet match last week and being added to the WWE championship match at Day 1. Current WWE champion, Big E, calls out Lashley for having MVP assist him in picking up the win. Big E and MVP almost come to blows, but Seth Rollins and Kevin Owens run down and jump Lashley. They turn their attention to Big E, slamming him into the security barrier. Rollins looks for the stomp on Lashley, but Big E makes the save. The champ with an overhead belly to belly on KO and Lashley hits Rollins with the Dominator.

Sarah Schreiber asks Bianca Belair about this being the “Final Chapter” with Doudrop. Belair wants Doudrop to learn that she will never take her out.

Elsewhere backstage, KO and Rollins are conspiring to take Lashley out of the match at DAY 1. Adam Pearce and Sonya Deville inform the two that they will team up to take on Big E and Lashley tonight. The two are not in love with the idea.

I feel like these two have faced each other every week for the past month. Doudrop misses a splash from the middle rope. Bianca connects with a cross body from the middle rope and follows with a moonsault. Doudrop hits a massive powerbomb in the middle of the ring and drags Belair into the corner. Drop goes to the middle turnbuckle and once again misses on the splash. Bianca is able to hoist Doudrop up and hits her with the KOD. She covers and gets the pin to close the book on Doudrop.

Austin Theory can’t keep his phone out of his face. He tells Kevin Patrick that he feels like the luckiest boy in the world since Mr. McMahon has taken interest in him. He thinks Vince sees him as a future WWE champion.

Balor comes out swinging, beating Theory into the corner. Austin takes the fight to the floor, slamming Finn into the apron. Theory is looking to make an impact and drops Finn with a neck breaker off the apron to the floor. In the ring, Austin connects with a high flying drop kick. Theory catches Balor on the top turnbuckle and hits a modified Spanish Fly. He goes for selfie pin, though. Balor kicks out and the counters the ATL. Finn with the shotgun drop kick and follows with the Coup de Grace. Balor covers and gets the pin.

Before brining out his guest, Miz wants to address his wife, Maryse. He does not want her to talk about their relationship on “The Cutting Edge”. Miz welcomes AJ Styles and Omos to Miz TV. Omos tosses his chair out the ring as Miz talks about the team being out of synch. AJ calls the friction growing pains. Styles says they are on the same page. Someone has told Miz otherwise, and that someone was Omos. AJ and Miz start to argue when the Mysterios interrupt.

AJ Styles and Omos vs. Rey and Dominik Mysterio

Rey Mysterio gets the hot tag and hits the 619 on Styles. AJ blocks the frog splash, but Omos doesn’t accept the tag from Styles. Rey is able to roll AJ up and get the pin.

After the bell, AJ rips into Omos. AJ throws hands, but Omos shoves him across the ring. Styles with a kick, but gets picked off the ropes on the Phenomenal forearm. Omos slams AJ to the mat. Omos tells AJ next time he sees him it will be in a match.

Austin Theory thinks better of knocking on Mr. McMahon’s door and walks away.

Gable surprises Orton with drop toe hold and Orton rolls out of the ring to gather himself. Orton catches Gable on the apron with a boot and sets up the draping DDT. Gabe escapes only to get hit with the RKO in the middle of the ring.

After the bell, Otis attacks and is able to block several RKO attempts. Orton escapes the ring with no damage being done.

Back in the lockerroom, Lashley tells MVP he can’t trust Big E, but he will beat on Rollins and Owens. MVP wants to know if he still have Lashley’s trust. Bobby asks him to grab him a water.

Earlier today, 24/7 Champion Dana Brooke and Reggie were at a Christmas park. They were being stalked by Akira Tozawa and R Truth. Tamina wanted those two to stay out of her way. Tamina nearly got a roll up on Brooke. The two fought among the Christmas lights, but Dana was able to escape with Reggie.

Priest goes up top, but Ziggler catches him; hitting a superplex. Priest still has his anger issues. Roode knocks Damien off the apron with a leg sweep and the United States champ goes after him. Priest with  a flying forearm. He beats on Roode on the floor, either ignoring or not hearing the referee’s count. The ref hits ten; counting out Priest.

Winner via count out: Dolph Ziggler

Priest then chases Ziggler out of the ring and then hits Roode with the Reckoning.

Finn Balor is talking with Kevin Patrick when Austin Theory blindsides him.

After the attack, Theory finally visits with Mr. McMahon. He wants to know if he did good. Vince points out that he did lose his match, so he could fire him. Vince loves firing people. Instead, he gives Austin another chance to beat Balor in the ring.

Edge welcomes Maryse to the show and he’s been in the business long enough to know this is a trap right? Maryse tells Edge her story. She wants thanks form Miz for everything she does. Edge starts to see through the charade and wants to know where Miz is hiding. Miz’s music hits, but he attacks from behind. Edge fends him off, until Maryse hits him with her purse and slaps him. Miz hits the Skull Crushing Finale.

With out any distractions at ringside (Carmella), Ripley can take care of business. Of course, Zelina calls Nikki A.S.H. the distraction. Vega counters a suplex with a stunner, but it’s not enough to get a pin. Ripley with a big boot and looks for a suplex from the top. Zelina escapes and hits a running knee. Ripley hits the Rip Tide and covers to get the win.

Big E says tonight is about setting the tone for Day 1, which means he has to lay hands on Kevin and Seth. Lashley tells Big E he won’t need MVP’s help at Day 1, but tonight he is focused on KO and Rollins. Big E wants MVP left in the back.

Liv Morgan hits the ring and has a message for Becky Lynch. Over the weekend, Liv thought she found Lynch working out, only to get jumped from behind. So Liv, is admitting that Becky outsmarted her. That’s a bold strategy, Cotton. Morgan held her own this past weekend and now she has the kendo stick with her. Morgan calls out Lynch for sacrificing an innocent woman because she is scared.

Lynch walks out on the ramp to respond. She tells Morgan that she go lucky and at Day 1 the champ will teach her a lesson. Becky won’t get in the ring while Liv has a kendo stick. Turns out that is for Lynch. Morgan tosses it on the floor in front of her. Lynch has a jet to catch and walks away.

Lashley runs into a boot in the corner, but then leap frog Rollins. Owens runs in to break the pin after a slam. Rollins leaps a charging Lashley, who accidently spears Big E.  Owens tags in, but Lashley blocks the stunner and spear KO. Rollins is too late with the stomp as Lashley gets the pin.

After the bell, Rollins and Owen pull Lashley to the floor. The hit Big E with the ring steps and then to the same to Lashley. Owens power bombs Lashley into the apron. KO sets Lashley on the steps. Rollins hits a running Black Out. The two shake hands and hug in the middle of the ring. See you next week.

The biggest transgression of tonight’s Monday Night RAW was that Riddle was nowhere to be be found. No Riddle means no RK Bro and that means no fun. RAW starting with a talking segment that leads to tag team match featuring the four men in the title match at Day 1 doesn’t help either. Oh, and there were two, TWO, talk show segments this evening, further dragging down the score. And none of the matches tonight were must see. Do better WWE.