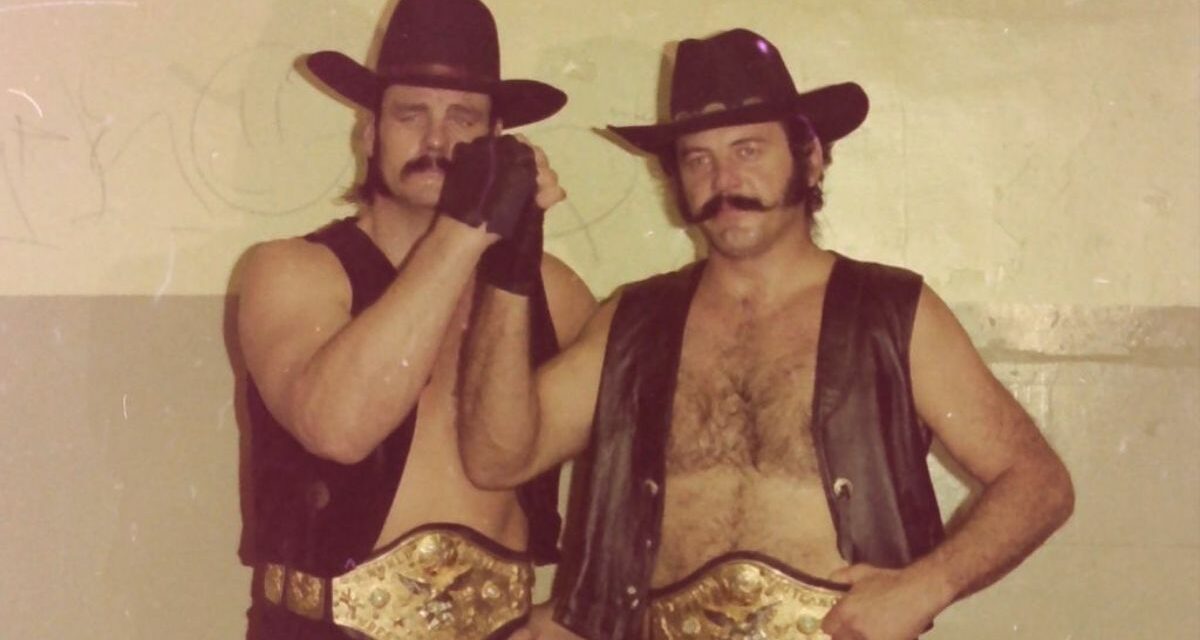 There were two stages of professional life for Jack Lanza, who died today, December 8, 2021. In one, he was the “World’s Meanest Wrestler,” and a part of the legendary Blackjacks tag team with Blackjack Mulligan. In the other, he was a key, behind the scenes agent in the WWF/WWE. He was 86.

John Mortl Lanzo was born October 14, 1935, to William Lanzo and Louise Mortl, in Minneapolis, Minnesota. The 6’5″, 250-pounder broke into the wrestling business in 1962 after being trained by Verne Gagne. A former sociology teacher after attending the University of Minnesota, he started as the babyface “Cowboy” Jack Lanza before being paired with Bobby “The Brain” Heenan in Indianapolis as the heel Blackjack Lanza, billed from Albuquerque, New Mexico. “I hit if off with Blackjack Lanza the first day I met him. It was just one of those things. We made each other laugh and became the best of friends,” wrote Heenan in his first book. He also worked as Joe Lanza.

Mulligan (Bob Windham) and Lanza were initially paired in 1972, in Indianapolis, under the guidance of Bobby Heenan. Their run ended in 1975, when Mulligan left to go solo in Charlotte.

They were too good to last, said Mulligan in The Pro Wrestling Hall of Fame: The Tag Teams.

“Most tag teams are one weak guy and one strong guy, not two main eventers. Lanza and I were two main eventers, which was hard to keep as a team,” explained Mulligan. “Usually a team is formed by a weakness of one who’s an undercard guy, who’s a great talent that’s never going to make it big, and this other great talent that pulls the team along. But they compliment each other together … We were main eventers so we didn’t really hold the longevity that we should have because we split.”

But oh what a run.

“They had the gimmick … they were impressive with their big 10-gallon hats. And the size of those guys! Especially next to us,” recalled the 5’10” Gino Brito, who worked as Louis Cerdan in the WWWF. “Height-wise, Christ, Mulligan must have been a foot taller than I was. In New York, in those days, if you remember, Vince Sr. had a penchant for all these big guys, starting with Gorilla Monsoon, the Blackjacks, Jesse Ortega, guys that were 300 and up. The babyfaces weren’t—even [Bruno] Sammartino was only about 5’11”, 6’0″, Pedro Morales was about my height. But all his heels were so big. The Blackjacks fit right in.”

Wearing black vests, black boots and, of course, black hats, the Blackjacks dominated territories like Montreal, Dallas, Chicago and Indianapolis. “It was just an awesome team, a great team. Lanza was great to work with. He had all that experience,” said Mulligan. “I was green, but I was just a big guy that went in there and blasted guys.” 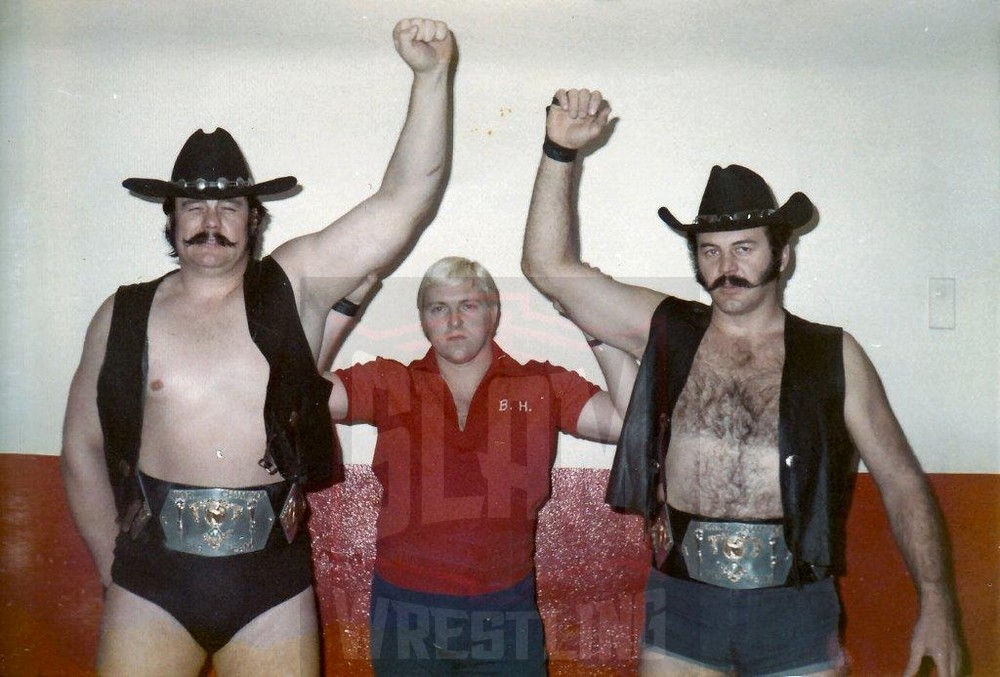 The Blackjacks and Bobby Heenan. Photo by Dave Burzynski

In the WWWF, they had their biggest run, winning the tag titles from Dominic Denucci and Pat Barrett in August 1975, and losing the belts four months later to Cerdan and Tony Parisi. “Captain” Lou Albano managed the Blackjacks in New York. He called them “big, quick, rugged guys … temperamental, but they were pretty good guys,” in The Tag Teams.

On his own, Lanza worked in the AWA as a top villain. With Heenan again as his manager, he was in the Heenan Family, often teaming with Cowboy Bob Duncum.

Jules Strongbow (Francis Huntington) was new to the business in this AWA days, but found Lanza to be a teacher even then. “When I first was breaking in to the business, Lanza was one of the guys that would pull me aside and help me out a little bit.” 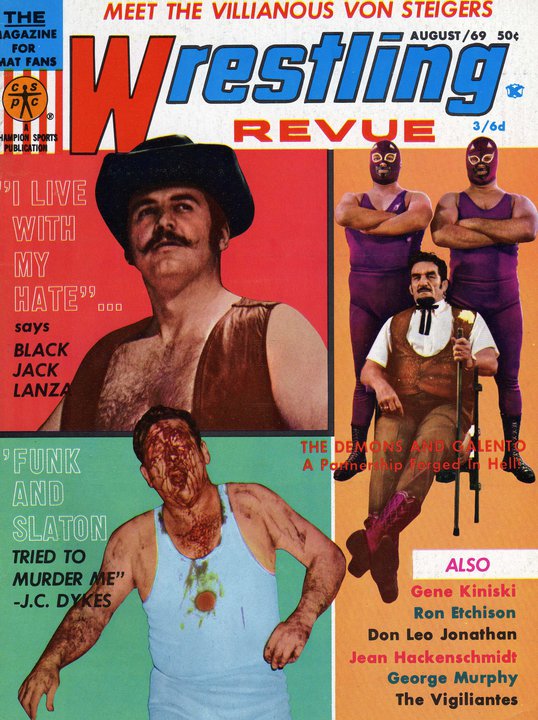 For a time in the early 1980s, Lanza was a key figure in the AWA town of Winnipeg. “When Jack Lanza bought Winnipeg, the first thing he told Verne [Gagne] was, ‘Look, okay I want this and that. Greg [Gagne], I don’t want Greg working up there.’ They were insulted. But the territory went up and up and up,” recalled Rick Martel. “Winnipeg was on its ass, then he built it and built it. We some had some great crowds after that.”

Lanza protected the business, and rarely gave interviews, even in retirement. (That extends to his personal life, where very little has ever been revealed.)

In a 1971 Winnipeg Free Press feature, Lanza was asked about getting hurt:

“Hurt?” said Mr. Black Jack, who holds a B.A. from the University of New Mexico and who taught school for two years, but loves the big paydays he now gets. “I’ve had cuts . . . see my nose? It used to be straight . . . My teeth have been knocked out, I’ve had a broken jaw, fingers broken, bad knees . . . You bet I’ve been hurt.”

When asked if his profession is fake or real, in a 1976 interview with The Pioneer newspaper out of Bemidji. Minnesota, he replied, “If you’re going to ask question like that we might as well not have the interview.”

With the WWF’s expansion in the 1980s, Lanza jumped ship and became a respected agent behind the scenes, and was often on camera through the years as one of the men in suits rushing out to break up a brawl.

An agent in the 1980s and 1990s had many roles. “You might say that we were babysitters on the road,” once explained Tony Garea, another veteran agent. They would do everything from arranging match results and helping wrestlers plan out their matches, to fixing any travel woes, to dealing with the venue, and, in the early days, collecting the money.

However, since the agent was around, he (and it was always a “he” until recently), would offer up advice.

“I grew very close to Lanza. I was a sponge around him — I wanted to learn everything from Jack. The guy had been a legend in his day, and I was thrilled to have the opportunity to work under him,” wrote Vince Russo in his book, Forgiven. “As time went on, I’d tell him how I had so much more to offer than Vince [McMahon] could every realize. Jack used to tell me every week, ‘Be patient, and just keep doing what you’re doing.’ Man, I loved the guy; we grew extremely close.”

In a SlamWrestling.net interview, Don Callis told Bob Kapur that there were many to learn from. “I had a tremendously positive experience in the World Wrestling Federation. It was my dream as a wrestler and a young man to get there, and I got there and had so many great experiences out there. I learned a great from guys like Jim Ross, from Vince, Jim Cornette, Pat Patterson, Jack Lanza. All those guys taught me a lot, and those are lessons I took over to ECW to make me a better performer.”

The referees fell under the influence of the agents too. “Very saddened to hear of the passing of a true legend, teacher and friend, ‘Blackjack’Jack Lanza,” tweeted Jim Korderas. “Spent many years under his learning tree while developing a great relationship. Thank you Jack and rest in power good sir!” 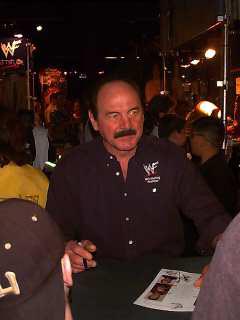 In 2004, it was Lanza who had the honor of inducting Bobby Heenan into the WWE Hall of Fame. Two years later, on April 1, 2006, the Blackjacks were inducted as well, with Heenan introducing them.

The Pro Wrestling Hall of Fame inducted the Blackjacks in May 2016, in its first ceremony held in its new home in Wichita Falls, Texas. Stan Hansen did the honors, as Lanza was too ill to attend and Mulligan died in April 2016.

Lanza had been in poor health. His is survived by his wife, Barbara Jean Kalil, whom he married on September 28, 1957, in Douglas, Minnesota. There will not be a funeral service, as per his wishes.