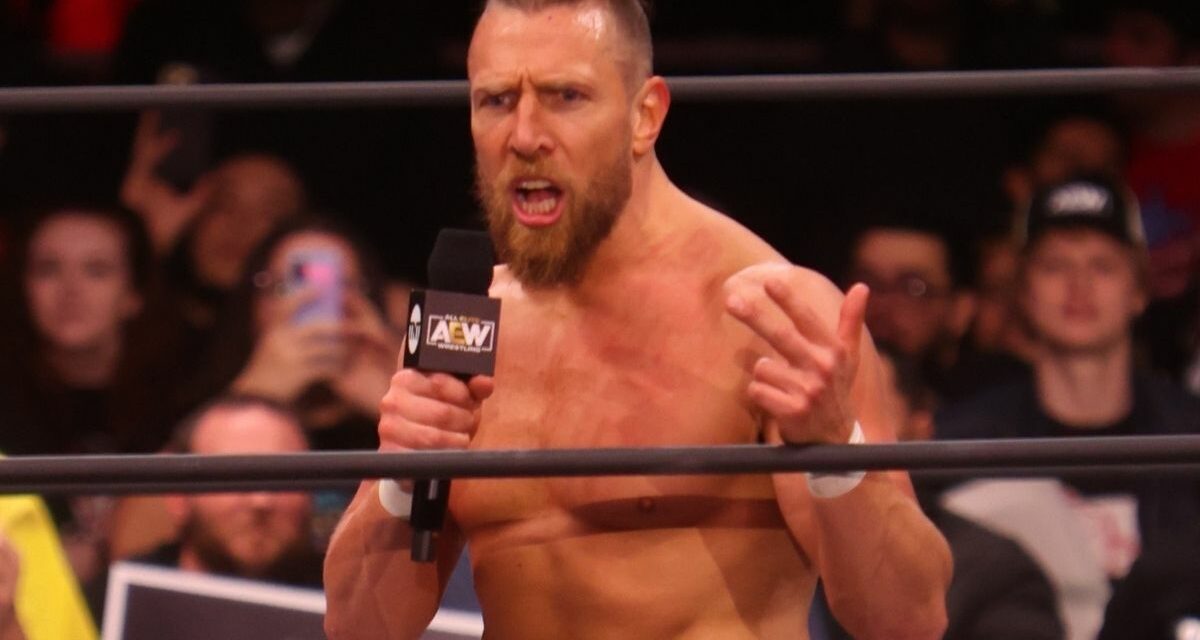 It’s Wednesday night and you know what that means! Well, usually it means Nick Tylwalk is recapping AEW Dynamite, but he is swamped with work heading into the holidays. That means you are stuck with me. AEW is a few weeks into the Cowboy Era and Bryan Danielson is gunning for that belt. He has been fighting his way through the Dark Order, warming himself up for his match with Adam Page. Let’s head out to Long Island, where the New York Islanders have yet to win a game in their new home, UBS Arena in Belmont Park.

Best wishes to Jim Ross, who is missing tonight’s show as he battles cancer. MJF’s music hits, but CM Punk walks out on stage. And MJF’s hometown crowd is not happy, although some “CM Punk” chants break through. Punk leans into the crowd, going full heel on them. He takes off his hoodie to reveal a “Pillars of AEW” shirt, but Britt Baker has replaced MJF. He calls out MJF for slipping out of the ring two weeks ago. Punk isn’t mad at the crowd, he just feels sorry that MJF is their guy.

Punk has a vested interest in next week’s AEW championship match, because he figures he is next. But first he and MJF need to settle things. 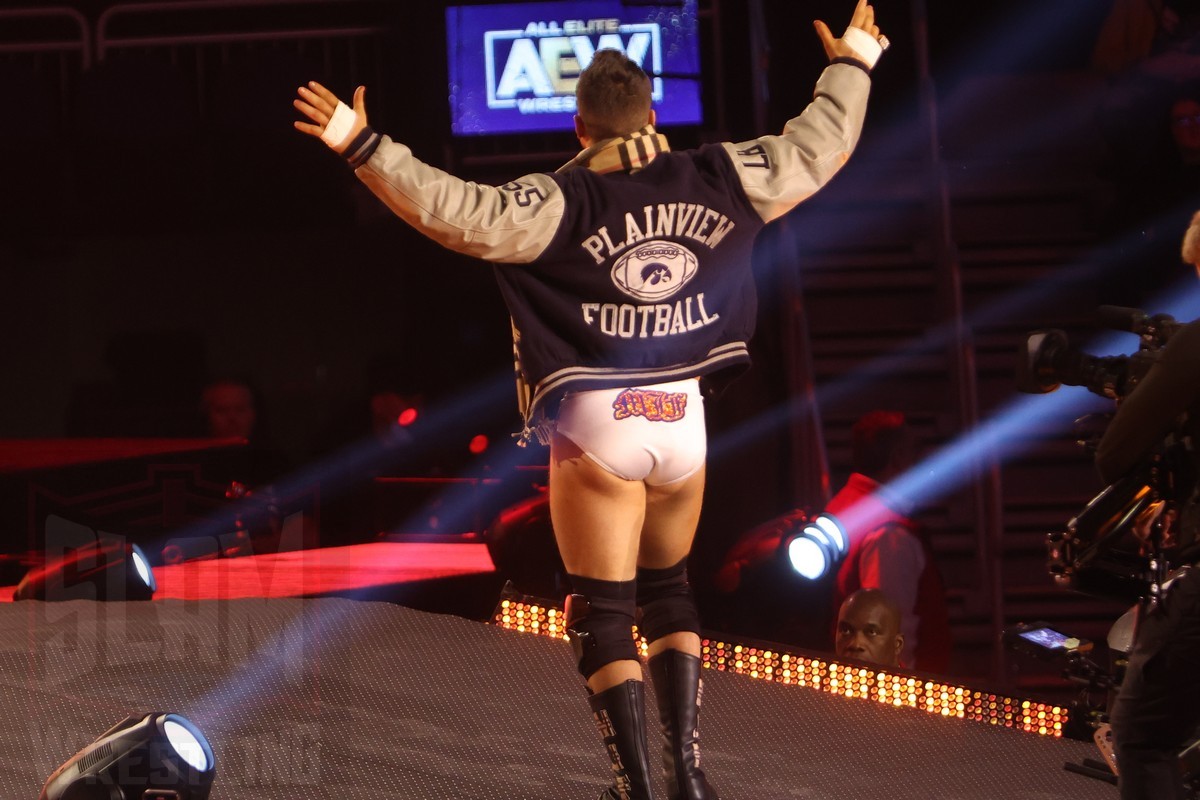 MJF is proud of his Long Island roots at AEW Dynamite, at UBS Arena in Belmont Park, NY, on Long Island, on Wednesday, December 8, 2021. Photo by George Tahinos, https://georgetahinos.smugmug.com… See more in the PHOTO GALLERY!

The last two men will compete next week for the diamond ring. Team Taz has three men in the match and consider themselves the favorites. The Bunny slips Matt Hardy Brass knucks, who uses the to take out and eliminate Jay Lethal. Dante Martin and Lio Rush face off, only to get blindsided. Wardlow and Powerhouse Hobbs go toe to toe, only to have Lio Rush take out Hobbs. MJF eliminates Lee Johnson and Lio Rush, but unfortunately also eliminates Wardlow. Ricky Starks and Dante Martin and left against MJF. Martin turns on Starks and eliminates him. He pulls off his Team Taz arm band as Taz loses it on commentary.

MJF wants a hand shake after the match and Martin shakes. MJF exits, as Ricky Starks puts the boots to Martin. MJF stops on the ramp, eventually returning to the ring. He faces off with Starks, but then puts the boots to Martin. CM Punk runs in and MJF bails. Martin with a drop kick to Starks and Punk hits him with the GTS. Punk wants MJF in the ring, but he just heads to the back.

Jungle Boy starts the match by single handedly clearing the ring. The Varsity Blondes then fly over the top rope to take the heels out. Brian Pillman gets trapped in the heel corner and just can’t get the tag out. Luchasaurus gets the hot tag and clears the ring. 2.0 gets taken down with a double clothesline. Jungle Boy tags in and looks for eth snare trap on Max Caster. Daniel Garcia jumps to the apron; Eddie Kingston runs down and yanks Garcia to the mat. Caster looks to hit the Mic Drop, but Jungle Boy rolls away and locks in the snare trap. Luchasaurus keeps the ring clear and Caster taps.

Winners via submission: Jungle Boy, Luchasaurus and the Varsity Blondes

After the match, Kingston takes the cameraman backstage where Ortiz and Santana are waiting for 2.0. A full on brawl breaks out and its takes four referees to break things up.

Tully Blanchard says FTR will be the first team to capture the tag team titles twice, but the Lucha Brothers are ducking them.

The Bucks take out Taylor, but Rocky is able to fight them off for a time. Nick traps Rocky in the corner and Matt rakes his back. Romero fights his way out the corner and gets the tag to Taylor. The Bucks are forced into a meeting of the minds and then DDT’s both of them. Taylor with a suicide dive, but then becomes preoccupied with Cutler. The Bucks take advantage, but first they dap up Adam Cole on the floor. Taylor gets kicked in the head from the apron. Nick follows with a flipping senton. Taylor takes another senton in the ring. Orange Cassidy throws up a stop sing to Nick Jackson, so Adam Cole take Orange out with a pump kick. In the ring, though, Taylor stacks up the Bucks in the corner. Romero delivers the Forever clotheslines. On the floor Rocky with a leaping hurricanrana to Nick. He hits running sliced bread on Matt and nearly gets the pin. Nick Jackson with a facebuster on Romero behind the ref’s back. Romero counters a northern lights suplex with a DDT. Cutler runs in with the cold spray for Nick. Cole and Orange enter the ring, and Nick superkicks Cassidy. The ref is occupied with Cutler, who then accidently sprays Nick in the face. Matt breaks up a jackknife pin. Romero with a backslide and follows with a leaping knee strike and a heel kick. The Bucks hit the Meltzer Driver and cover to get the win.

Winners via pinfall: The Young Bucks

After the match, Taylor and Cassidy get beat down in the ring. Wheeler Yuta tries to make the save, but gets beaten. Orange takes Panama Sunrise from Cole. The Bucks set up a three way BTE Trigger, but is interrupted by the Best Friend’s music. Sue rolls up in the mini van and Trent Baretta hops out. He takes out everyone. Kris Statlander and Sue love it. All four men hug in the ring. The Best Friends are back together! 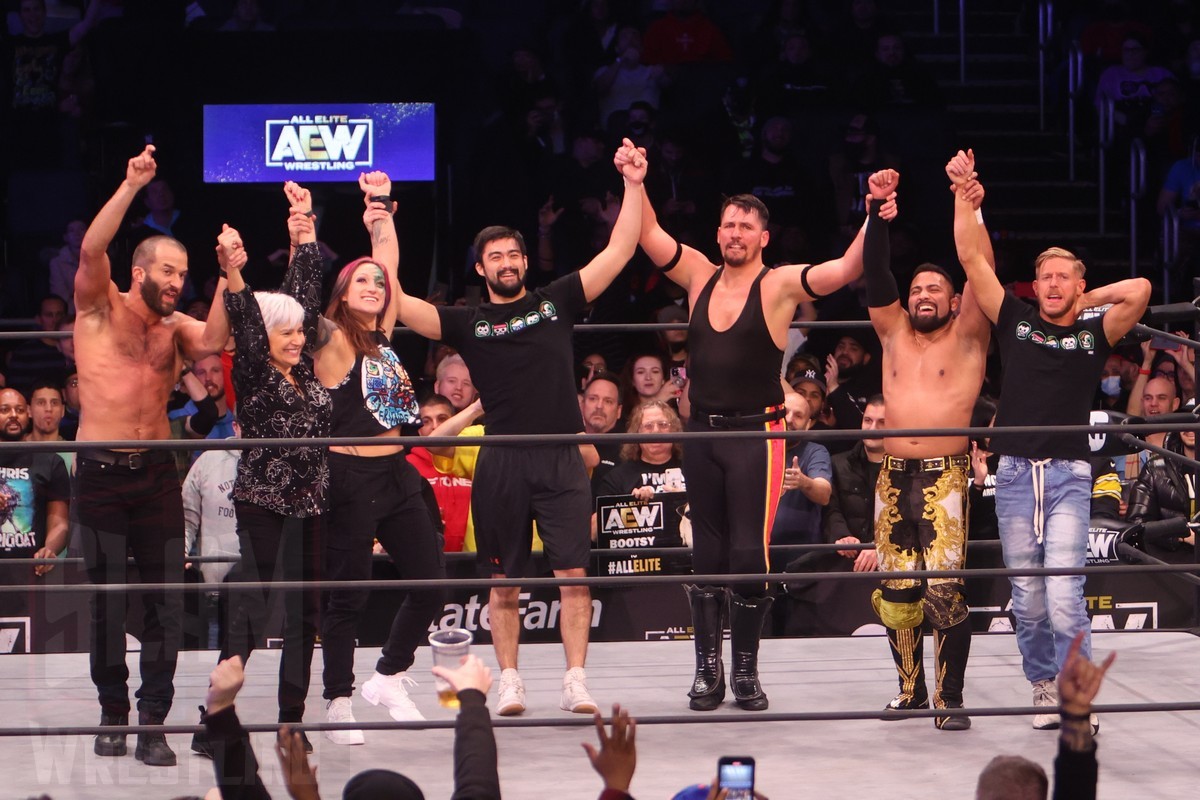 The Best Friends are back together at AEW Dynamite, at UBS Arena in Belmont Park, NY, on Long Island, on Wednesday, December 8, 2021. Photo by George Tahinos, https://georgetahinos.smugmug.com … See more in the PHOTO GALLERY!

The Bunny and Penelope Ford interrupt Ruby Soho’s interview. They will get the first crack at the TBS championship when Nyla wins it. They tell Ruby that she will face them in a trios match, but they don’t thing she can find any friends. Ruby starts throwing hands, but takes a cheap shot for Nyla Rose. Tay Conti and Ana Jay run her off to save Ruby.

Tony Schiavone is with Sammy Guevara, and is immediately interrupted by Cody Rhodes, who tells Sammy that on Christmas Day he will be face him for the TNT Title.

From the crowd, Ethan Page isn’t isn’t pleased that Cody can just show up and get a title shot. Scorpio Sky calls out Sammy for facing anyone that isn’t in the top five. Sammy wants the Men of the Year to come down from the stands.

Hayter shrugs a flying shoulder block from Riho. She then slaps aside a drop kick and hits Riho with a back breaker. Britt Baker chokes Riho in the corner with the ref distracted. Riho with a hurricanrana and drops Hayter into the ropes. She hits the tiger feint kick and goes up. Hayter kicks out of the pin after a jumping cross body. Riho dives from the top rope, but Hayter catches her on the floor and drives her into the ring post. In the ring, Riho hits a desperation double footed stomp. Riho floats over and looks for a dragon suplex. She sticks Hayter in the mat, but still can’t get the pin. Hayter with a brain buster and Riho kicks out. Hayter with a back breaker and Riho kicks out again. Hayter locks in a single leg crab. Riho rolls through goes over the top, but then takes a boot to the face. Hayter runs into a leaping knee strike. Riho with a Code Red, but can’t get the pin. An atomic foot stomp doesn’t put Hayter away, either. Hayter looks for a superplex up top, but Riho fights her off. Rebel grabs a boot of Riho, allowing Hayter to recover. Riho fights her way off Hayter’s shoulder and hits an avalanche crucifix. Riho follows with a running knee strikes. She covers Hayter and gets the three count. 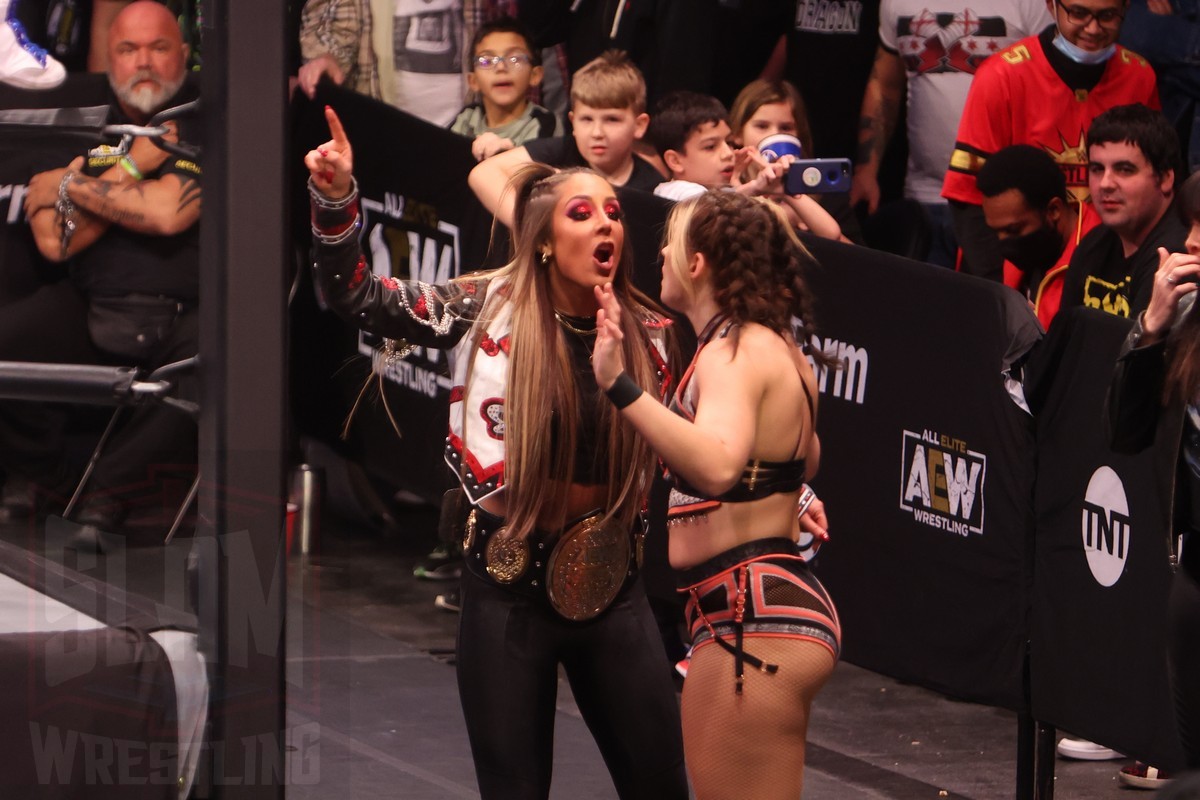 After the match, Britt Baker attacks Riho and applies the Lockjaw. 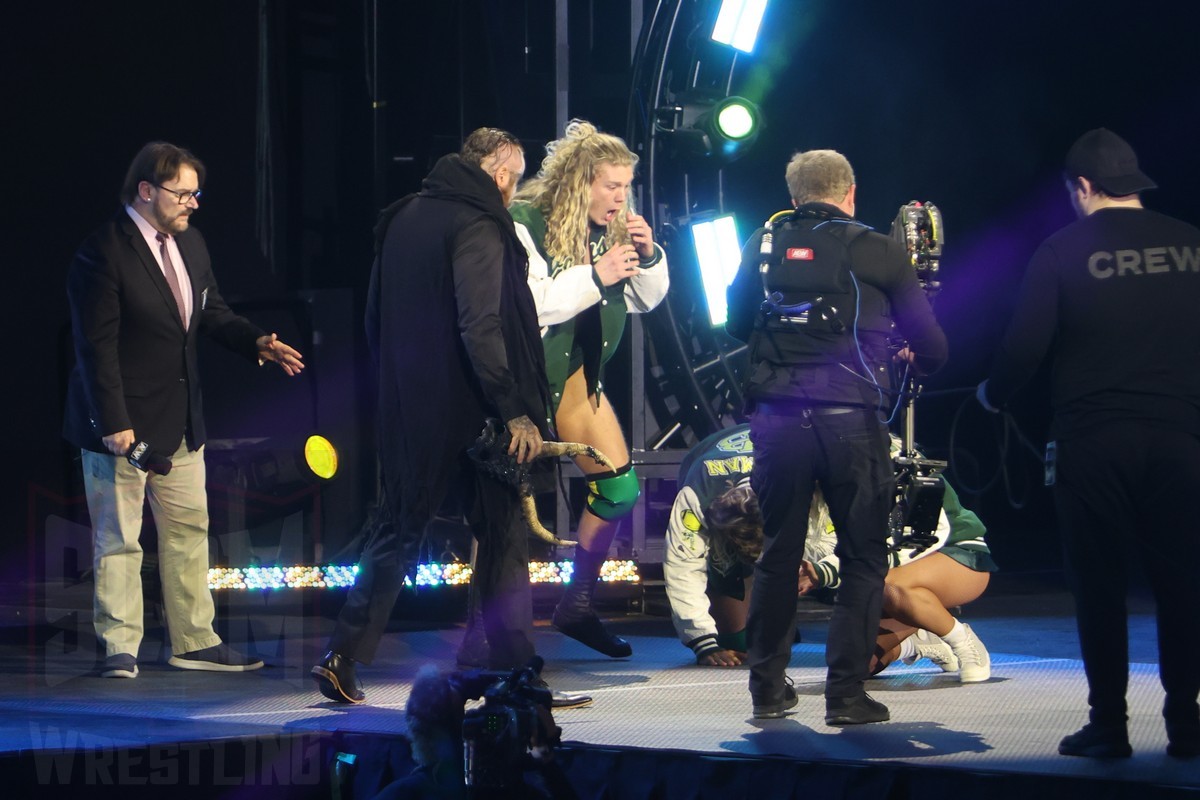 Malakai Black interrupts an interview by the Varsity Blonds at AEW Dynamite, at UBS Arena in Belmont Park, NY, on Long Island, on Wednesday, December 8, 2021. Photo by George Tahinos, https://georgetahinos.smugmug.com… See more in the PHOTO GALLERY!

Tony Schiavone is with the Varsity Blondes, the the lights go out. Malakai Black appears and spits the Black mist in Julia Hart’s face. The lights go out again and Malakai is gone.

Danielson with a wrist lock and follows with a shoulder block. Silver responds with one of his own. Bryan wants a test of strength but it’s a trap. He kicks Silver in the gut. Silver with kicks of his own. Danielson lures Silver to the outside and beats him on the apron. Danielson with a diving knee drop. Back in the ring, Bryan drives Silver into the corner and kick away at him. Danielson connects with a shotgun drop kick, but lands on the back of his head. Silver with an ankle pick, Danielson is in the trouble. He tries to kick his way out, but eventually gets to the ropes. Bryan goes to the floor, where Silver takes him out with a cannonball from the apron. Silver with German suplex, but Danielson lands on his feet and kicks John in the head. Silver counters the running knee. He kicks Bryan in the back of the head and hits a German suplex. Danielson counters the Spin Doctor by gauging the eyes. He rains elbows down on Silver’s head. Bryan with a Gotch style piledriver and puts on a headlock. Silver passes out and the ref calls for the bell. 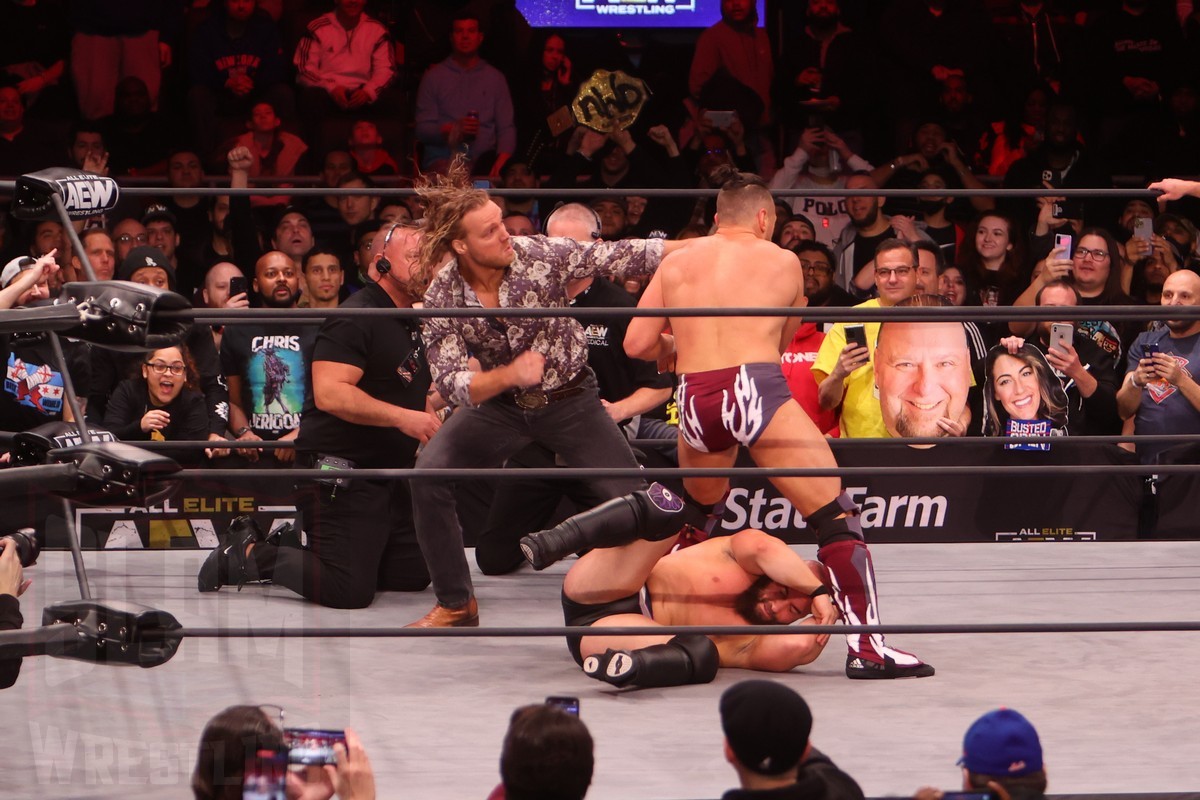 After the match, Danielson realizes he promised to kick in John Silver’s head. He starts to stomp away, when Hangman Adam Page makes the save. Danielson escapes the ring. Page promises to stomp the you know what out of Danielson.

AEW always puts a show worthy of watching when they focus on wrestling. Winter is Coming is next week, so many big names; CM Punk, Hangman Adam Page. The Inner Circle weren’t in action, but the Diamond Battle Royal was fun with a good swerve at the end. The eight man tag team is also worth checking out.