Angelo Mosca Jr. shares laughs and lessons from his father 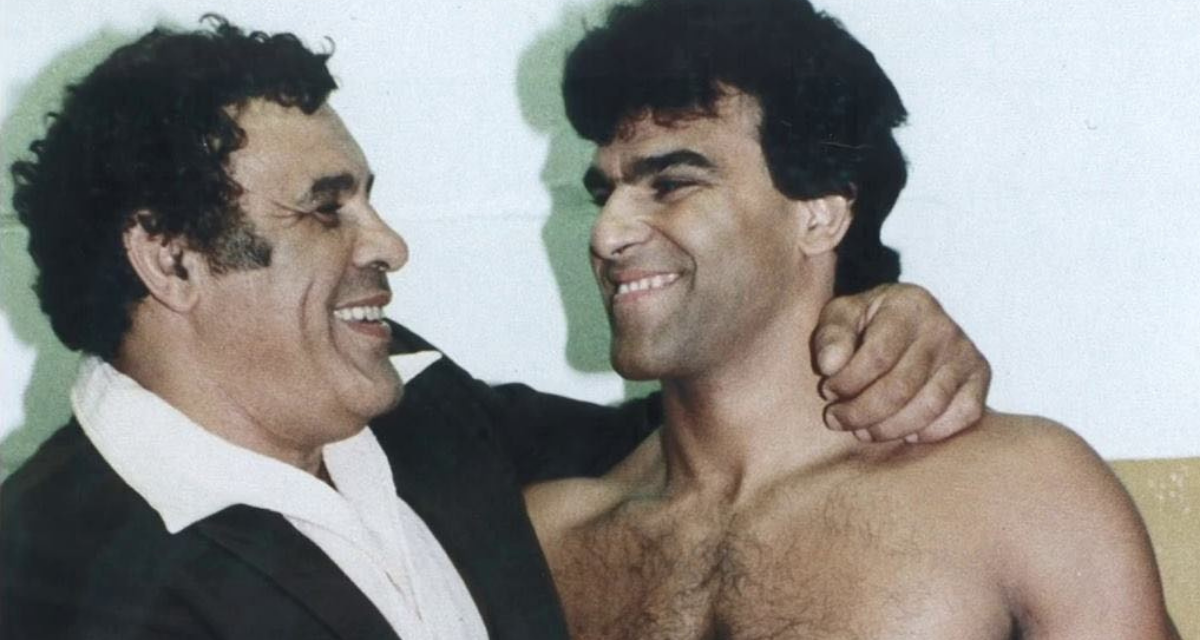 It’s less than 24 hours since his father, Angelo Mosca died, and Angelo Jr. is on the phone, laughing. He can’t help it.

He’s telling stories about being on the road as a wrestler with his dad, and each tale brings about another laugh.

You can tell it’s doing him a world of good.

“We had a different relationship as father and son than most … I grew up with my mom and my parents were separated when I was very young. So I didn’t really know my dad that well growing up,” Mosca Jr. told SlamWrestling.net. “And then all of a sudden, I became curious in the wrestling area. And before I knew it, I was there traveling with him. … we traveled together quite a bit. But of course, he always had the big Cadillac, and he was the one that always wanted to drive, and I was the passenger. And I was terrible as a passenger, I’d fall asleep.”

There wasn’t the expected bonding on trips. “People thought, ‘Oh, you must have talked and just really got to know each other.’ Well, no, not a lot.”

But there were ribs.

“My Dad was pulling practical jokes all the time. Well, what did he do? Anytime I’d fall asleep on the trip, we’d just get going, I’d be dozing off and then he would slam on the brakes and lay on the horn, have the wipers going and I’d wake up and go, ‘What’s going on?!’ He was like that, and that’s kind of things he did.” 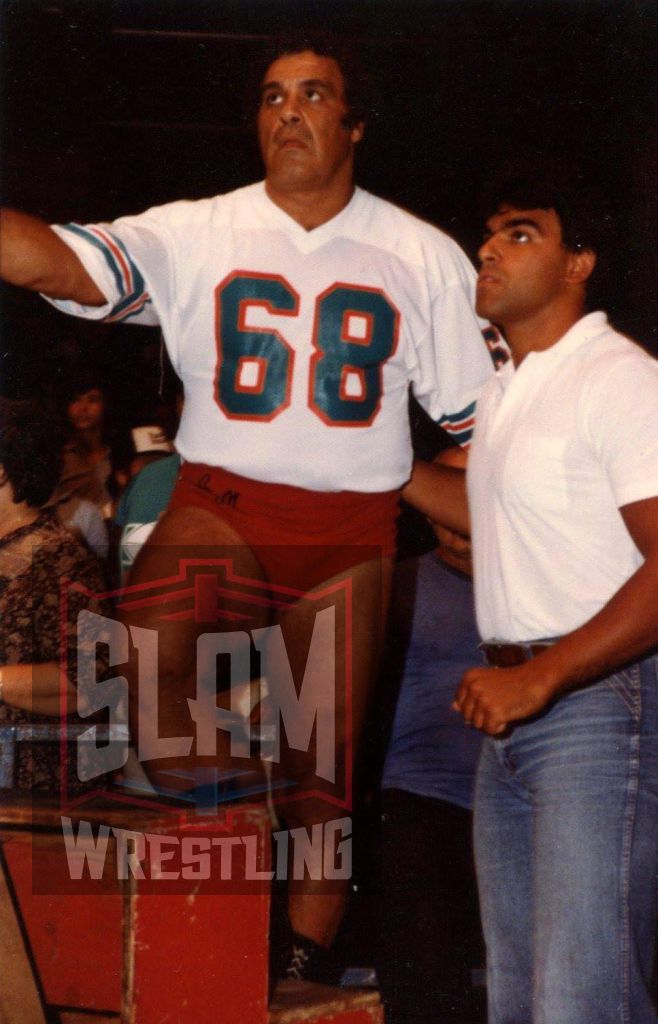 Big Ang arranged for his son to train to be a pro wrestler in Tampa, Florida, under Denny Brown.

“After the guys shot TV, we’d be in that arena or that ring that they shot at TV and it was a small little studio. And after the lights were on there, it’d be like 120 degrees, and we’d be working out for two or three hours. It was ridiculous. I did that for about five, six months before I had my first match,” recalled Mosca Jr.

Respect mattered to Mosca Sr. “My dad was one that instilled that in me. He says, ‘You be quiet and just listen to these guys, and they will teach you lots and they will bring you a long way.’  And he was right. I got some good breaks,” he said.

Eddie Graham was the promoter for the Florida territory. “I was fortunate he really liked me. I was a quiet guy that kept my mouth shut. Not a wise guy. And I really respected the older guys in the business, and I listened to them, and I learned from them. I think Eddie Graham knew that and his son, Mike, he hated me because his dad liked me so much.”

Mosca Sr. came in one day, and asked Brown, “Denny, is this guy ready or what?'” Brown replied, “Yeah, I think so, Ang.”

“My dad rolls in the ring, ‘Let’s see what you got.’ He comes off the ropes at me and he says, ‘I want you to slam me.’ He’s doing all the moves. I go to pick him up and thrown him down. When I threw him down, he landed on just one hip, not flat on his back. And he rolled out of the ring and he goes, ‘F–k you, you’re not ready. I’ll never get in the ring with you!'” recalled Mosca Jr., breaking into a big laugh.

“But I said, ‘Hey, it was just as much your fault as mine!’ Because you know as well as I do, if the guy doesn’t get his hand on your thigh to kind of rotate and push himself up — and my dad was 320 at the time, so I don’t care how strong you are, you’re not going to just physically hoist a guy up over to slam him if he doesn’t give you that help. There’s no way, I don’t care how big and strong you are — a guy that’s 320? Uh uh.” 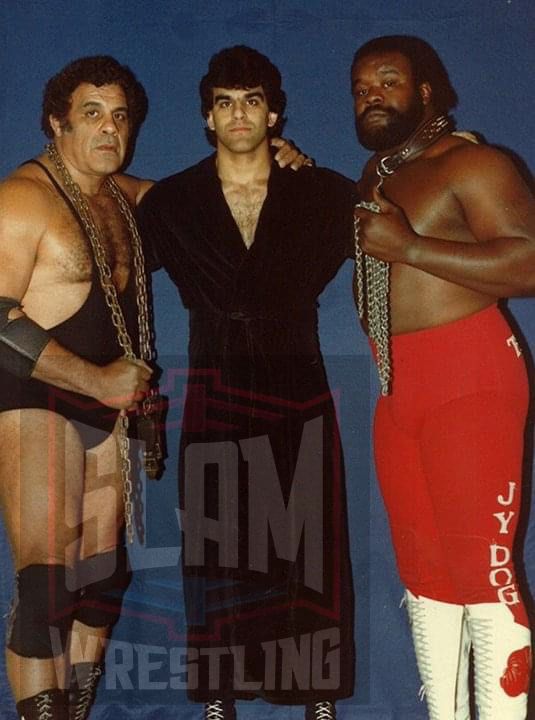 Mosca Jr. was taller than his father, but not as bulky. He played football at Concordia University, where he earned a bachelor of science degree, and did have a couple of tryouts with the CFL’s British Columbia Lions, getting into a couple of preseason games, but never stuck.

He had “a business plan that I wanted to stay in for five years, and make as much money as I could and sock it away and get out. And that all changed when I met my wife there within the first year.” Mosca Jr. really only wrestled full-time for two and a half years, and then some summer shows for Bearman McKigney around southern Ontario. 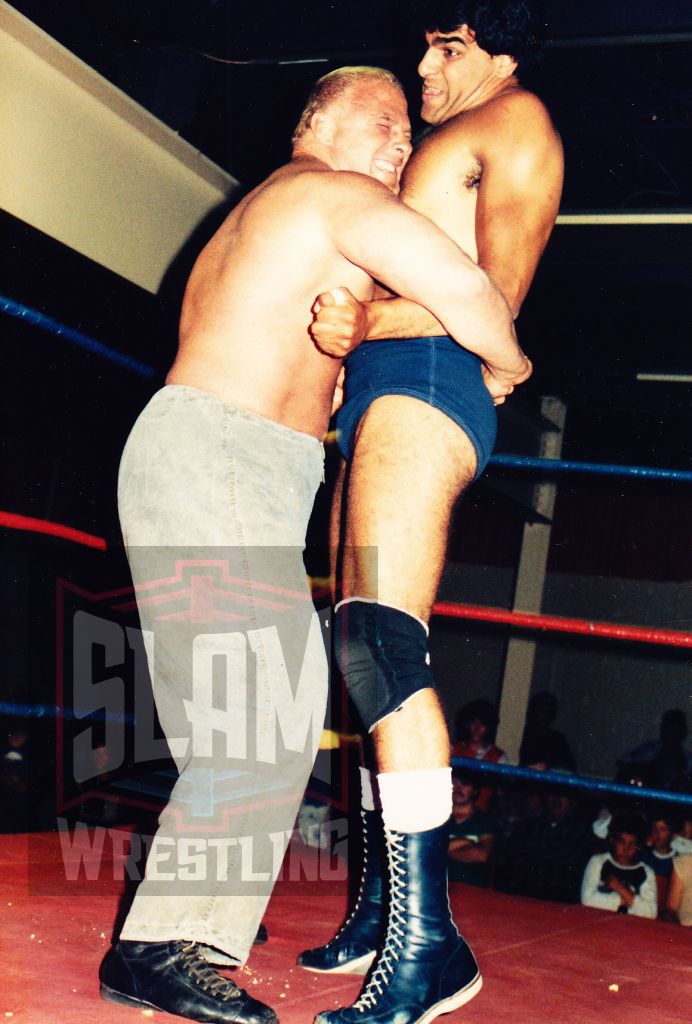 Angelo Mosca Jr. struggles in the grasp of Mark Lewin in a Bearman show in Ontario. Photo by Terry Dart

Mosca Jr. has no problem admitting that pro wrestling wasn’t for him.

“I was very reserved, laid back, kind of almost embarrassed at times and not liking to be out in the public eye. People said, ‘Well, how’d you run around in those swimming trunks like that?’ I said, ‘Well, honestly, looking back, I don’t know,'” he said with a laugh.

Getting to spend so much time with his father was the main reason he stayed in wrestling. “There’s lots of good memories, absolutely. He was a great mentor. I wouldn’t have lasted as long as I did in the business [without him].”

It is normal to compare father to son. Mosca Jr. knows he didn’t have everything his dad did. “My dad had great charisma. He could just walk in and command a room, and people, their heads would turn and all eyes on him.” 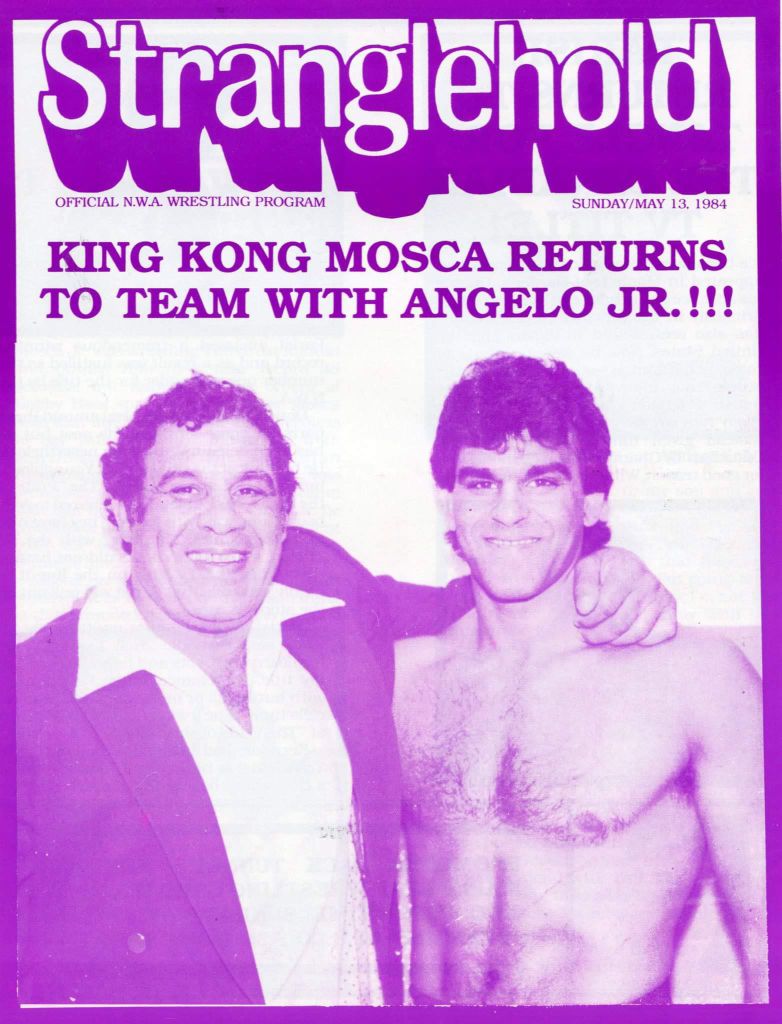 Some of the lessons from wrestling kept with Mosca Jr., working in a youth custody facility, and then as a frequent helper for his father at events.

A lesson: “He said to me, ‘This is a business, you’re their whore, and people come to see you, and you need to do what the people want. So when you’re in that ring, don’t forget there’s four sides and you don’t just keep your back to one side the whole match, you turn and you acknowledge the people here and here and here and here.'”

Fast forward to 2015, when the Tiger-Cats retired his number #68. Mosca Jr. accompanied his father to the field, and Steve Milton, who wrote Mosca’s book, Tell Me To My Face, was speaking to the crowd. “We’re standing facing one direction only, and my dad’s standing there, and he starts to blubber up and started to cry. And I went into his ear, and I said, ‘Hey, you old f–ker. Don’t start that, because you’re going to start me [crying]. And by the way, the people behind us, all they’ve seen is your ass for the last 20 minutes. How about turning it around like you told me and let the people see the other side of you?’ So I said that to him, and then he started to laugh, and he turned around. It’s something that’s stuck in my head for way back from when I wrestled. It’s little things like that, that most people don’t know.”

Time for another laugh.

“I think were in Spartanburg, maybe, we came out of the dressing room, and I used to wear that long black robe. And my dad always said, ‘You keep that thing closed, and then when you get in the ring, you open it up and you do the reveal.’ Especially to the young girls. I had the robe on and we’re coming down the stairs and actually Dory Funk, Jr. was on the stairs too, just to the right of my dad, we came down the stairs, and there’s a bunch of young girls screaming and hollering. My dad looks at Dory, Dory looks at him and my dad goes, ‘Hey, look at the old man! He’s still got it, huh?’ I said, ‘Give me a break.'”

Another frequent prank happened outside the arena. Fans would be hanging around, wanting to meet the wrestlers. “Well, he’d beat me to the car and he’s driving, of course. The car had power locks. So he hopped in and I come up to the car, and I go to open the door and I start pulling door handle and it’s not opening and now all the people are right on top of me. I knock on the window, like open up! I signed a few things, and I knock, and I’m looking, ‘Dad, open the door.’ He’s just flipping the door lock back and forth, playing with it.”

The laughs were a necessary part of the time on the road. “We had fun that way too. You had to in that business because otherwise it’s such a grind, that if you didn’t make light and have some fun with the guys doing stuff, it would be a really rough, rough go. And it was, it was a rough go too.” 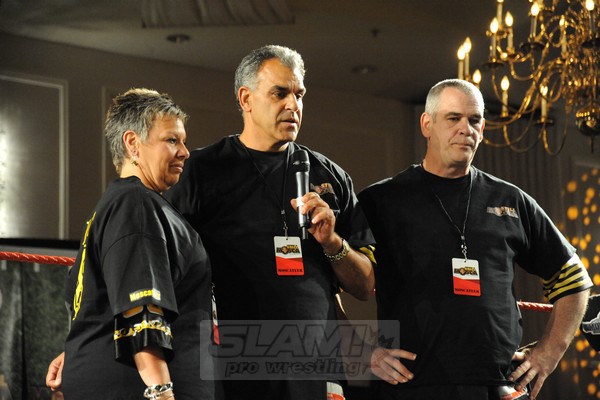 “Rough go” covers the last few years for Angelo Mosca Sr., right up until his death, around 2 a.m., on Saturday, November 6, 2021 (also the birthday of his grandson, Angelo Mosca III). Alzheimer’s robbed “King Kong” of memories, and his body, which had been his money-maker, betrayed him.

“With the Alzheimer’s he lost his ability with a swallowing reflex and couldn’t eat solid foods. They were pureeing his food and and adding this thickener to his liquids. And he just got to the point where he wouldn’t eat it anymore,” said Mosca Jr. “Over the course of the last 14 months, he lost close to 160 pounds, something like that.”

Complicating the passing was that Mosca’s brain had been committed to a study of CFL alumni. “He was involved in the study early on, but we stopped taking all the appointments because it was in Toronto, and it was difficult,” said his son. The family had to make sure the staff at Macassa Lodge in Hamilton, where Mosca died, knew which mortuary the body had to go to in order for the brain to be preserved and then transported to Toronto.

Mosca Jr. sees the donation of his father’s brain as a part of the bigger picture of Big Ang giving back.

“My dad was blessed with with the abilities by the Lord of having incredible physical size and strength and ability,” he began. “He received the Queen’s Jubilee award from the government that is given to people for exceptional charitable work in the community. And my dad in the later part of his life, that’s all he did was, he did so much fundraising and things for charitable organizations, like incredible stuff, and was always with the CFL just giving, giving back and giving back and giving back.

“That’s what the Lord’s call was for him. And it all started off through the journey of athletics and football and wrestling. And then it turned into that part of his journey.”